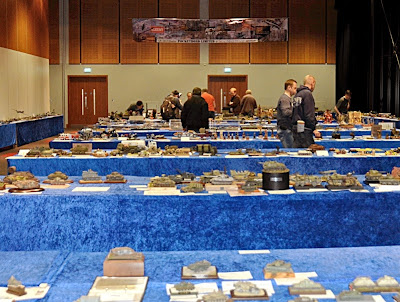 HERE IS AN OVERVIEW of winning models for the 2014 Scale ModelWorld, held recently at Telford, UK.


Mat Irvine: As I was section head judge for the Space/SF/Fantasy entries, that means I’ve been a bit biased in terms of the subject matter shown here. The photos mostly reflect my role at IPMS Scale ModelWorld 2014, but no matter - the general quality of entries was little short of spectacular, and the winning entries were highly deserving of note.

The header pic shows the Competition Hall as it looked before the judges started on their duties, while (below) their thoughtful work gets underway. 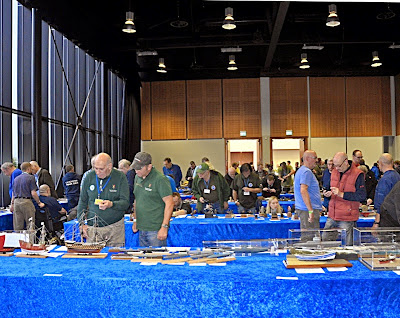 Silver winner in the Space/SF diorama section (below) was based on what we used to call SF-3D kits, now known more widely as Maschinen Krieger. I find the old-style SF-3D name easier on the memory and tongue! 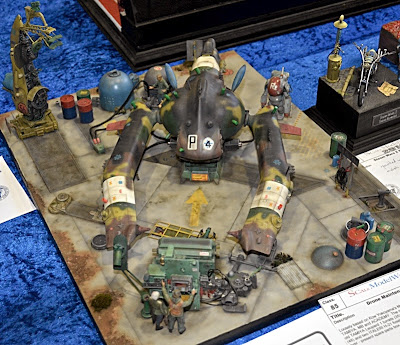 This Bronze winner in the Space/SF diorama section (below) was based on a Martian War Machine from Pegasus Hobbies, as featured in the 2005 movie War of the Worlds starring Tom Cruise. 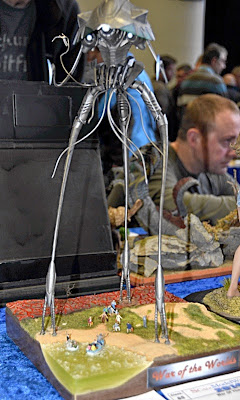 There were fewer steampunk-style entries than in previous years, but the mini-diorama below certainly qualified for the genre, even if diesel punk is perhaps a better description for the era depicted. The old-style fuel pump is a neat touch, and as for the girl... 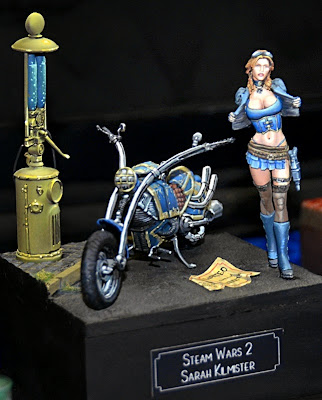 The senior ‘Best in Show’ overall winner was this excellent ship diorama, enclosed in a traditional wood-and-glass case. 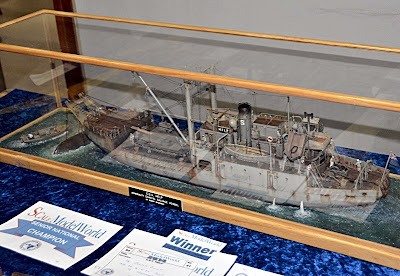 The junior ‘Best in Show’ overall winner (below) was constructed from a Tamiya Char BIS tank. 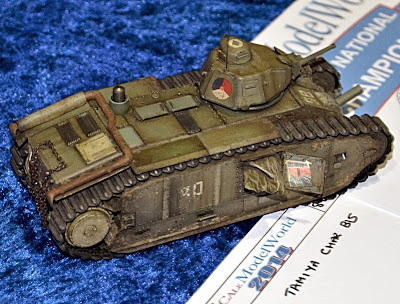 Below, a trio of Battlestar Galactica Vipers were the space stars in this superb Gold winner in the Space/SF diorama class. 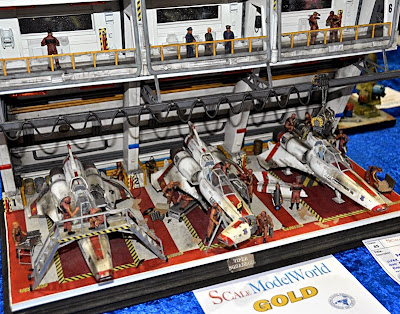 The multi-headed Hydra featured in another Space/SF/Fantasy diorama. 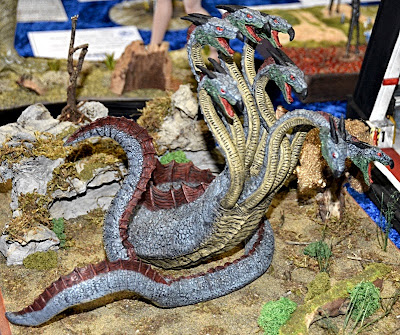 The best Space/SF bust (below) and, er, I think it’s Terminator, but I can’t recall which actor it’s meant to represent! 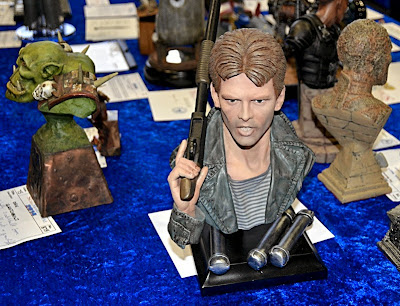 This Factual Space Gold winner (below) was based on the EVA Models Lunar Rover. Details such as an accurately reproduced lunar regolith base, the rippled US flag, and some very neat labelling helped to catch the attention of the judges. 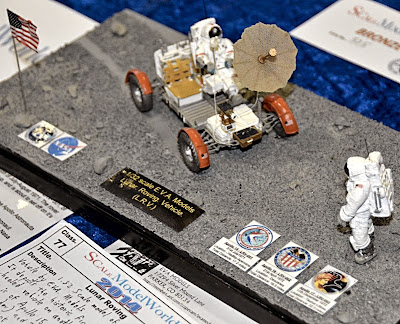 The scratch-built SpaceX Falcon launcher (below) gained Bronze in the Factual Space class. 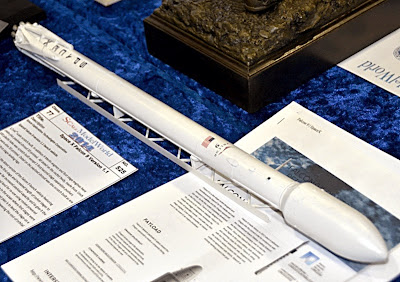 Given the many fantastic visions that Jules Verne gave us, there have never been that many model entries based on his works - even the Nautilus submarine is a comparative rarity.

This is the first time I can recall an entry (below) based on Verne’s space projectile, shot into space as described in his book From the Earth to the Moon. An unusual subject then, and a miniature that's been made more interesting by the detailed interior and standing figure. 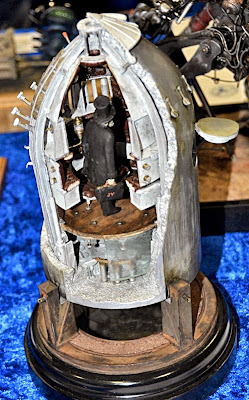 Below, a Cyberdyne Systems Model 101, Series 800, better known as the Terminator. 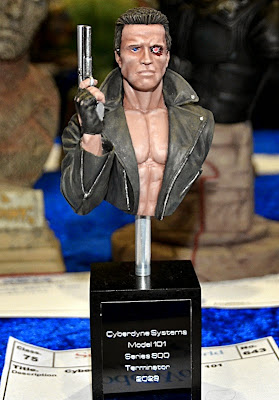 It's always good to see a bit of humour in model-making. The ‘deformed’ Alien (below) won Bronze in his/her/its class. 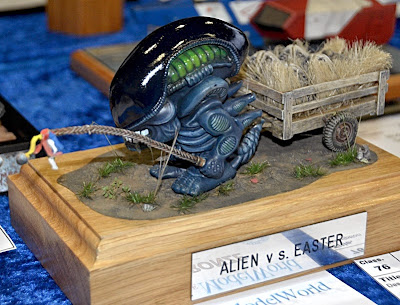 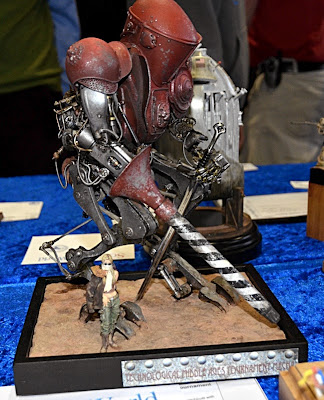 Below, this Space Helmet Models figure of an Apollo astronaut has been given an interesting ‘bronzed’ finish. However, it didn’t get a Bronze - instead, it earned a class Silver! 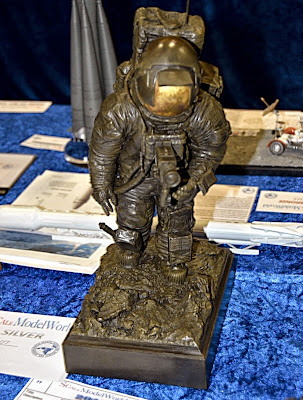 Models based on kits from Industria Mechanika appeared several times at Scale ModelWorld 2014. The modified Dragonfly (below) gained a Gold in its own class, and also won the Airbrush award. 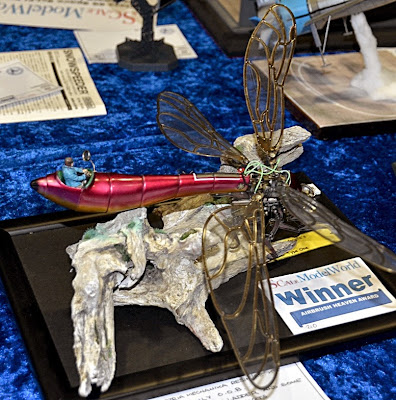 An originall-design Battlestar Galactica Viper (below) in a scratch-built hanger-cum-display box. 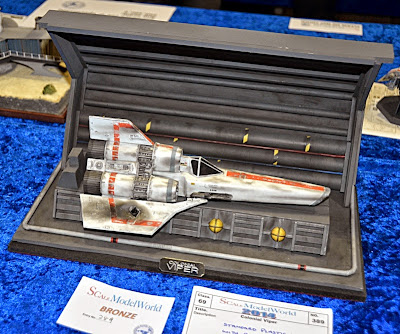 First, you need to spot the kit from which this Millennium Falcon (below) was built. In fact, this is a very nicely weathered* model, built from the Fine Molds release. 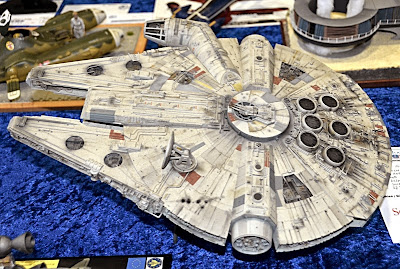 ‘Her Majesty's Estafette’ (below) is another original subject released by Industria Mechanika. This model won its own section, and was put forward to be judged as the overall ‘Best in Show.' A Space/SF entry won last year, but it was not to be this year, even though the Estafette was still an excellent build.

On a personal note, Industria Mechanika's vehicle kits seem to be all made to 1:35 scale - I just wish they also came in my own favourite auto scales of 1:24/5. 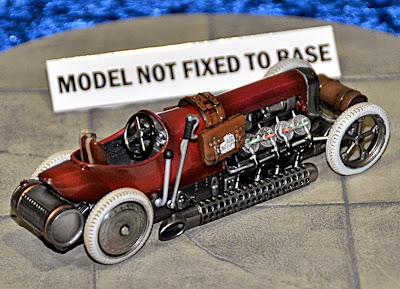