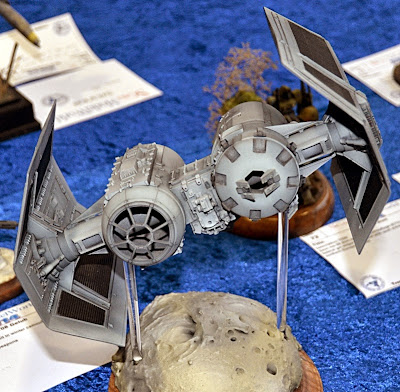 HERE IS A SECOND SET OF photos, taken by Mat Irvine at IPMS Scale ModelWorld 2014, in Telford, UK. 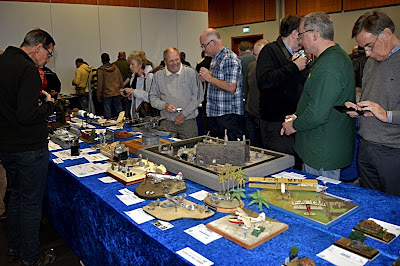 I'M NOT SURE of the exact model-count on display at the show, but as you can see from the photo (above) every table had much to show visitors. What's more, there were plenty to keep the judges busy on their inspection duties.

Industria Mechanika was well represented at IPMS Scale ModelWorld 2014. The neatly crafted IM kit (below) was a beautifully presented 1:35 scale model of the Remora, a 'sorta' streampunk flying cargo ship. The kit is ideal for weathering and this one has certainly been weathered! 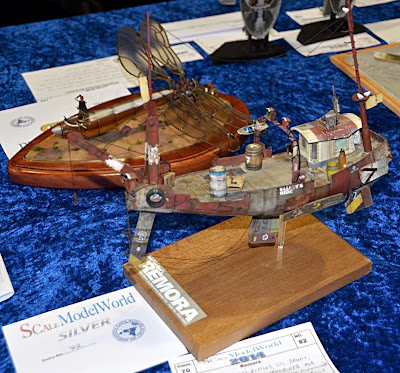 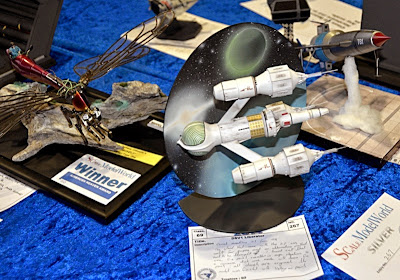 This Comet Miniatures Liberator (above, below) gained a Silver. Personally, I think the engine should be finished in a slightly darker green, but otherwise it was a good build, and had the additional feature of a circular 'space' backdrop. 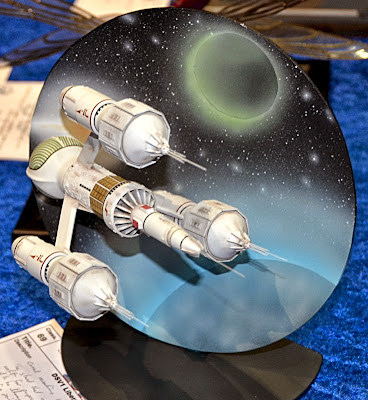 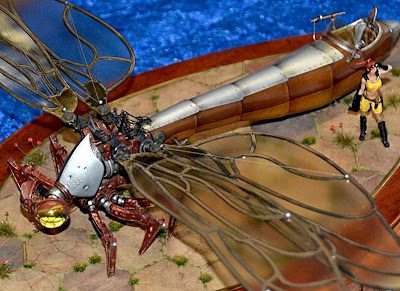 This Industria Mechanika Dragonfly (above, below) gained a class Gold. Besides the excellent paint finish on the craft itself, note the subtle details in the hexagon-pattern base. 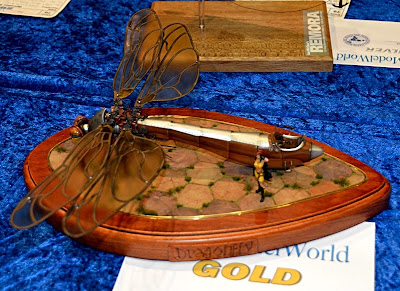 Precise paintwork (below) shows what can be done with care and skill, applied to a standard Games Workshop Imperial Knight. 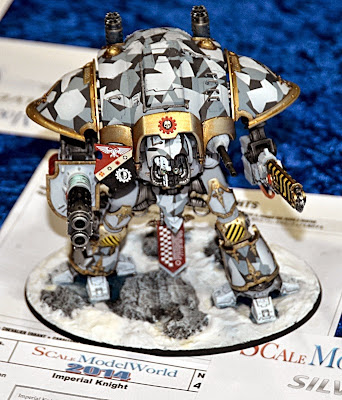 The Forgeworld resin kit (below) had an outstanding finish. 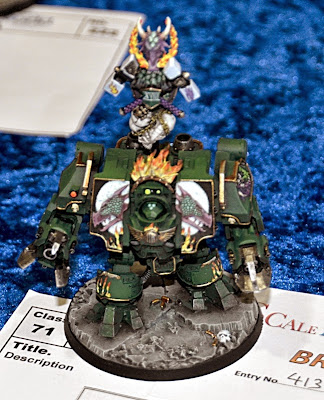 This mostly scratch-built Star Wars TIE bomber (below, header) was billed as ‘a model of the studio model’ hence it was not fitted with an interior. But there's nothing wrong with that, and as a subject, the twin-hull bomber made a welcome change from the more usual single-seat TIE fighter. 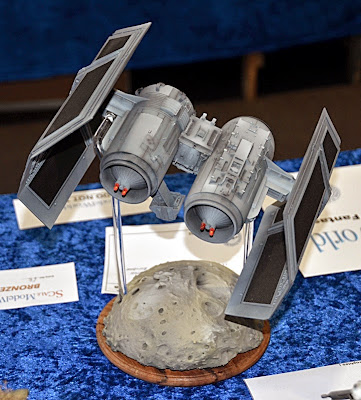 Small can be beautiful (below) and in this case a Gold winner, with 'Arlith the Silent Shadow' as the subject (it's a typo on the spec sheet). The model was made from an Andrea Miniatures white metal figure. 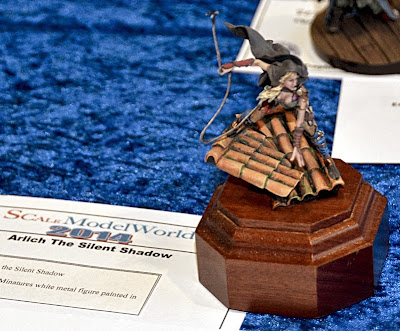 This diminutive figure of Gandalf the Grey ('Gray' on the plaque below) was awarded a class Bronze. 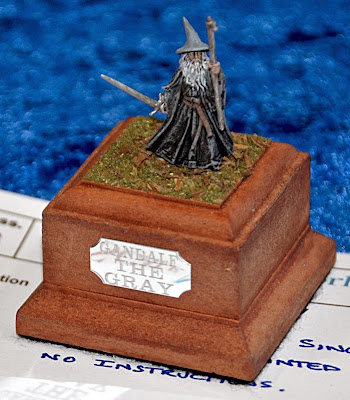 Superb paintwork and overall finish (below) on what is a standard Mobile Suit kit gained a Gold. 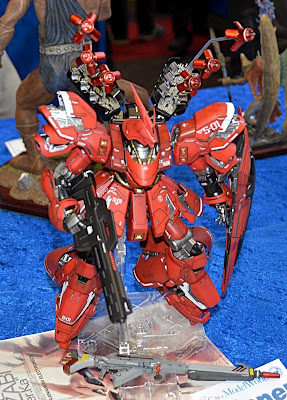 The judges shouldn’t have favourites (below) but I admit this came close. 'Life of squirrels' featured Scrat and his ever-tempting acorn, from the movie Ice Age. The model gained a Silver. 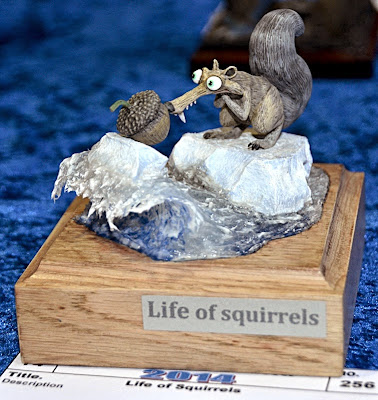 A lot of gold (below) in the Pharaoh’s Curse diorama. Unfortunately, the model didn’t gain the appropriate medal, nevertheless it made a highly intriguing entry. 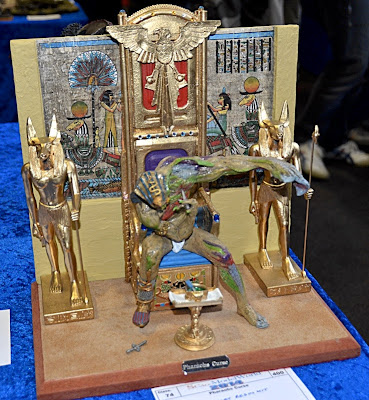 A Bronze win (below) for this Japanese robot. It displays another excellent paint finish. 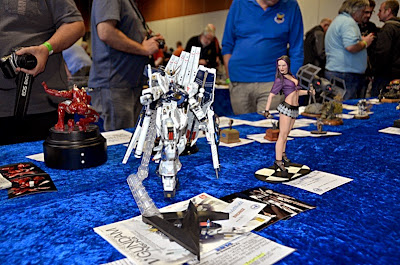 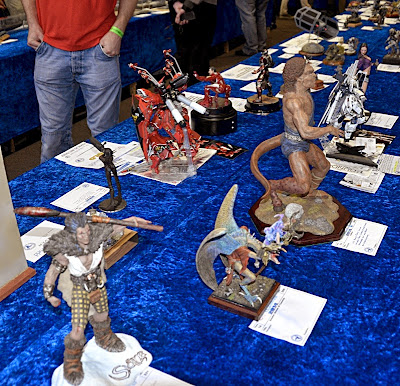 General views of the tables (above, below) show the incredible range of subjects on view. 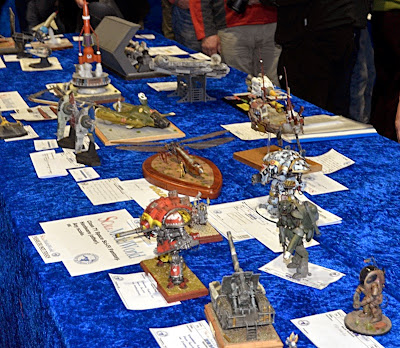 Retrieving a crashed Heinkel He 111 Luftwaffe bomber (below) made for an interesting diorama, packed with detail and interest. Depicting an inverted wreck was a masterstroke. 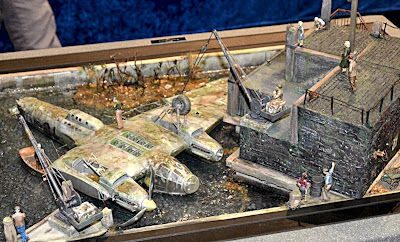 The vehicles table (below) was a small parking lot, full of miniature masterpieces laid out for close inspection. 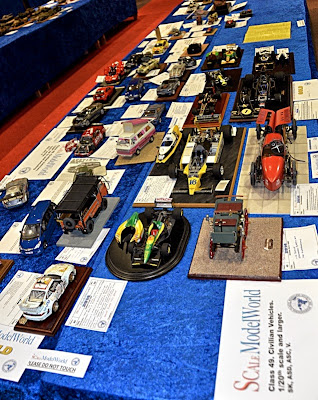 ‘Pretty in Pink’ Revell VW Camper (below) based on a Westfalia conversion. 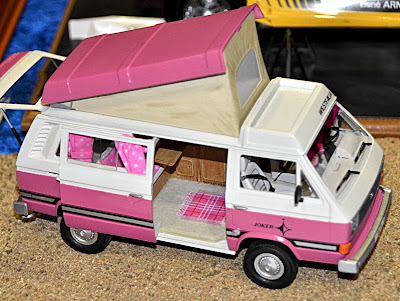 This Saunders-Roe Princess (below) showed off what the giant British flying boat might have looked like in military markings. The real thing (only three were made) was powered by 10 gas-turbine engines, one for each propeller. 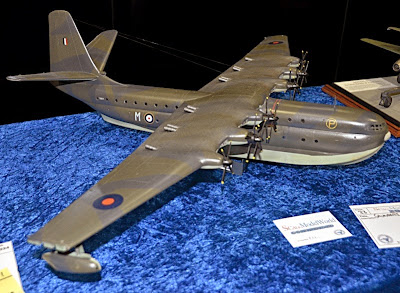