JUST PLAIN FOLKS? NO, WE ARE THE MUNSTERS - AND THIS IS A 1:9 SCALE KIT OF HERMAN 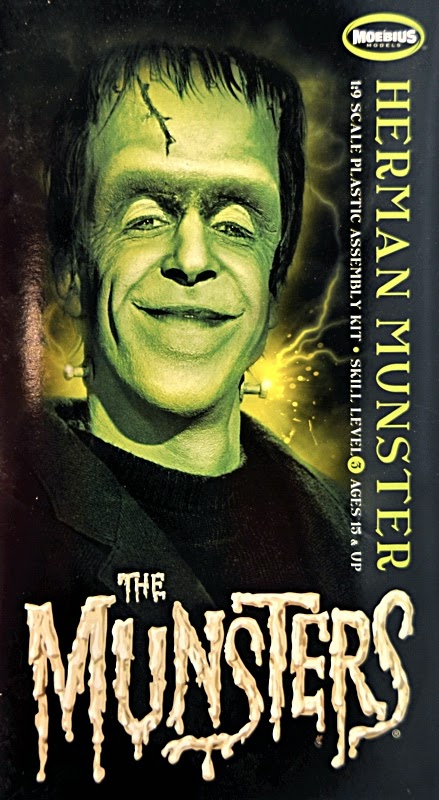 The Munsters TV series was made in the mid-1960s, and in back and white at that, but the story of America’s weirdest family is still intriguingly popular.


Mat Irvine: So Munster models continue to be released, and the latest kits on the scene are two figures from Moebius, featuring the head of the household, Herman, and his father-in-law of indeterminate age, Grandpa Munster. Today, I'm looking at Herman.

The box front (header pic) features a photograph of Fred Gwynn playing Herman in the original The Munsters TV series. The base (below) features the contents of the kit, plus mentions of other Moebius Munster kits: Grandpa Munster and the family home, 1313 Mockingbird Lane. 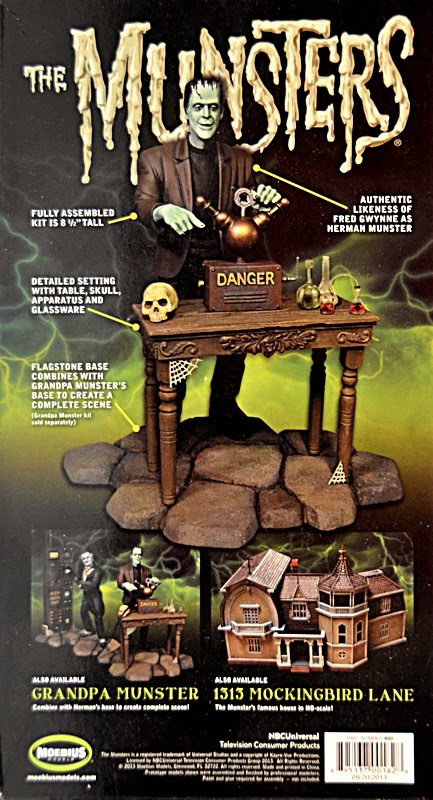 Herman, played by the wonderful American actor Fred Gwynn, stood even taller than Gwynn did - and at 6 ft 5 in (1.7 m) you might have thought he was tall enough. However, the script called for Gwynn to wear 4 in (100 mm) platform boots as part of his ‘Frankenstein’s Monster’ outfit, so he towered even higher.

The components (below) are mostly in ivory plastic, but you get some clear parts and a length of wire, seen here at bottom right. 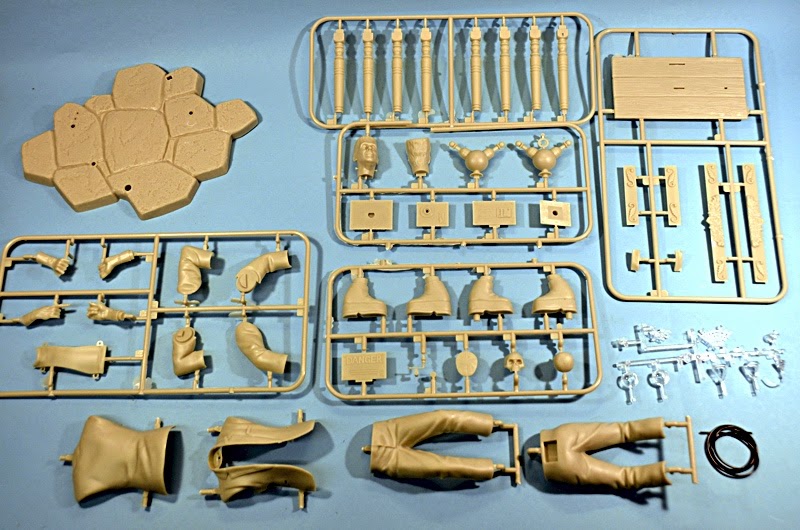 The kit assembles to show the figure of Herman, standing by his experimental table (below). Placed on it is an electrical device of presumably high-voltage - well, it does have the word ‘DANGER’ on it - with slight elements of the sort of equipment seen in the Universal Pictures’ original Frankenstein movie. 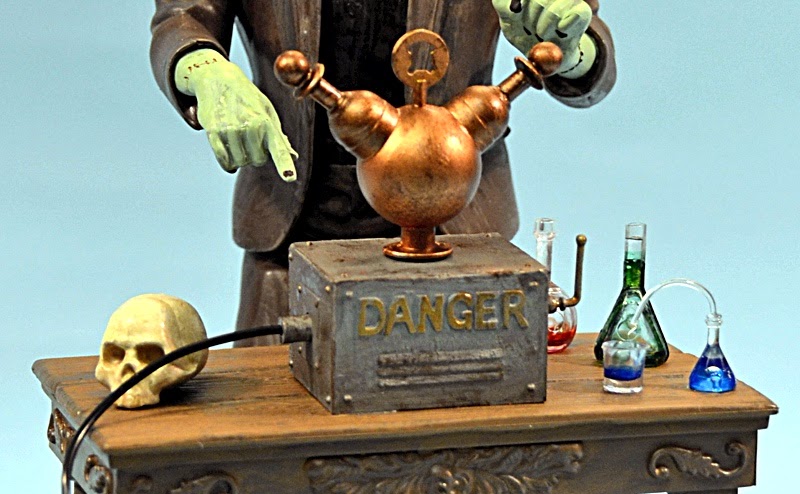 Parts fit is mostly excellent, though some filler can be useful (below) where the arms meet the shoulders. 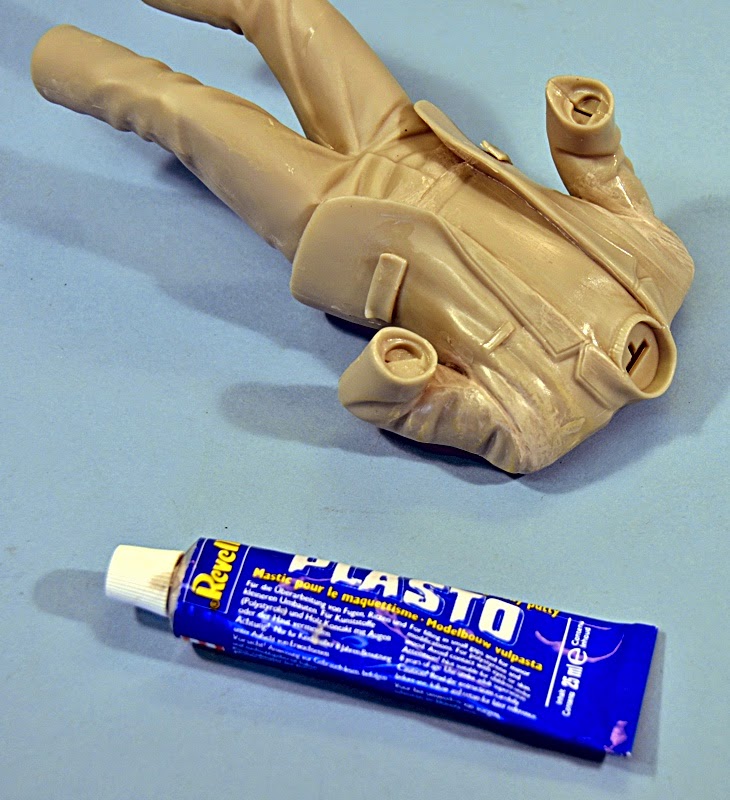 Additional props come in the form of a skull and various glass flasks, conveniently moulded in clear, so they can be tinted with transparent paints to represent being filled with liquids.

Two more clear parts are for cobwebs to attach to the table legs. These are maybe a bit too thick to be realistic, but can be omitted if you wish. A length of tube and wire can be used, to connect the equipment on the Grandpa Munster figure set. 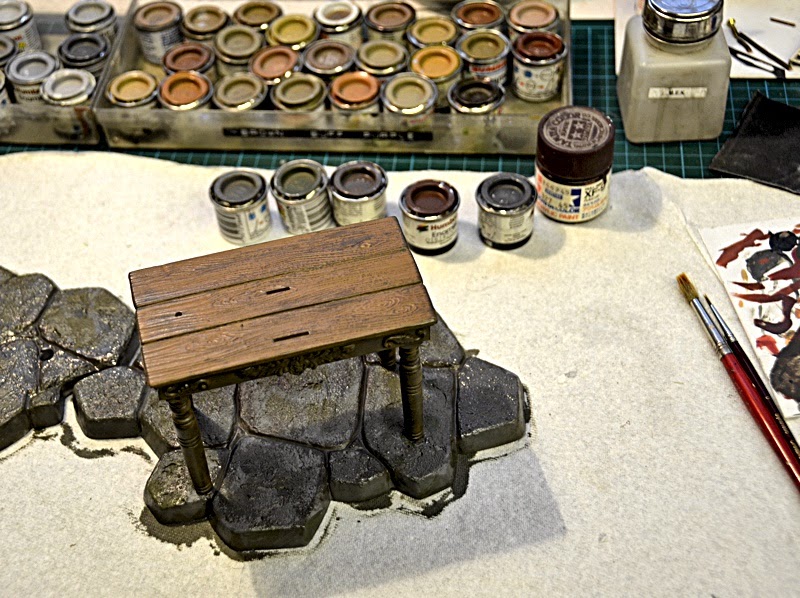 Building the table, and adding colours (above). Mixes of dark browns and greys are the most useful shades to apply, and later the whole kit can be weathered. 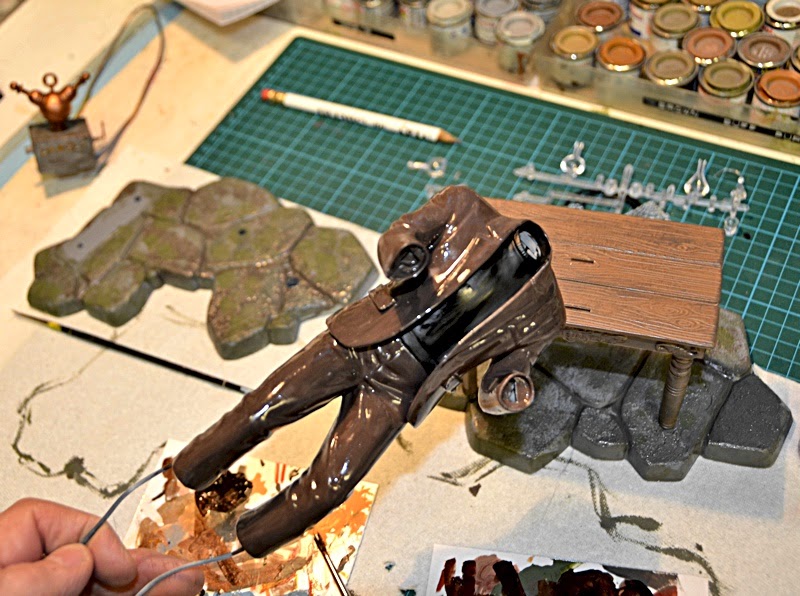 Herman (above) receives a similar finish, but a base coat of main colours has to go on first. Here the gloss paint, emphasised as it is still wet, will be dulled down with weathering and a top coat of flat varnish. 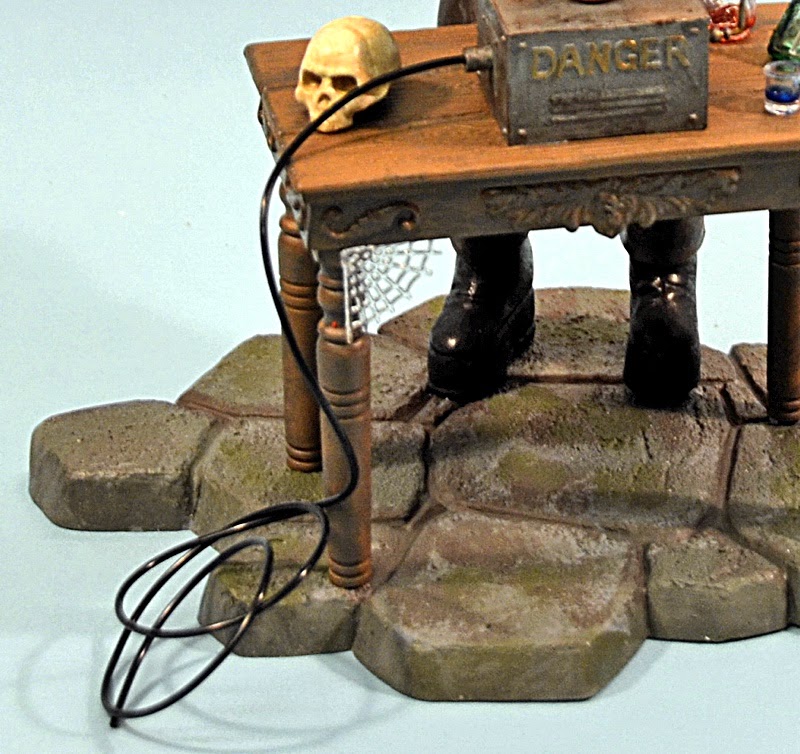 The completed kit has had washes and dry brushing added to maximise the overall appearance. Clear parts for the bottles can be painted with transparent colours to give the impression of liquid. 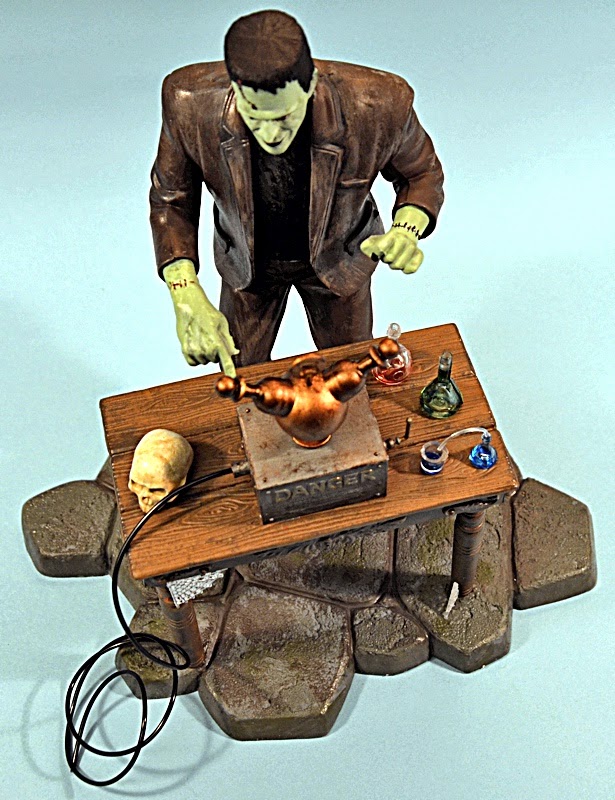 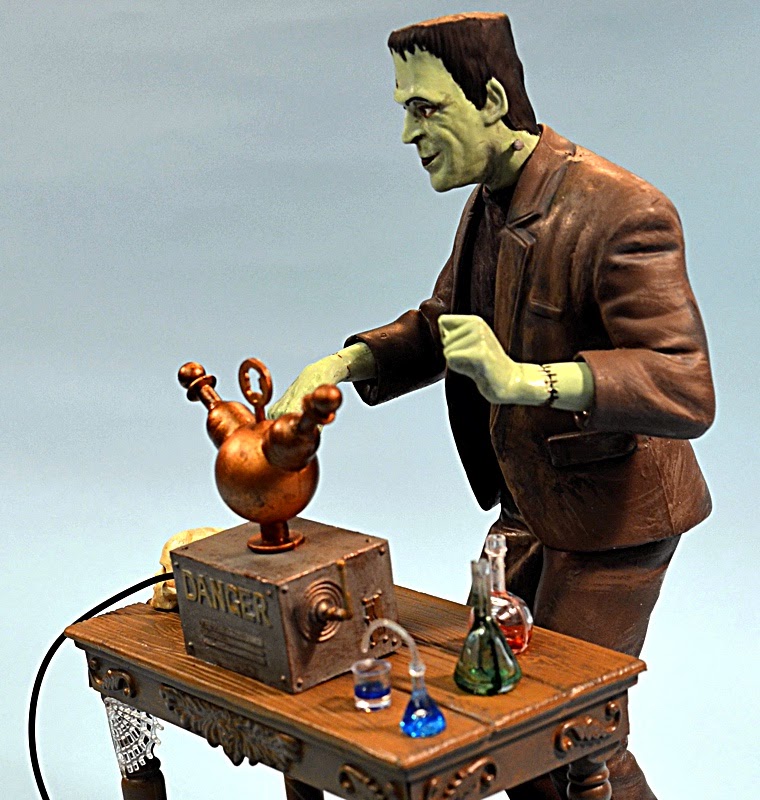 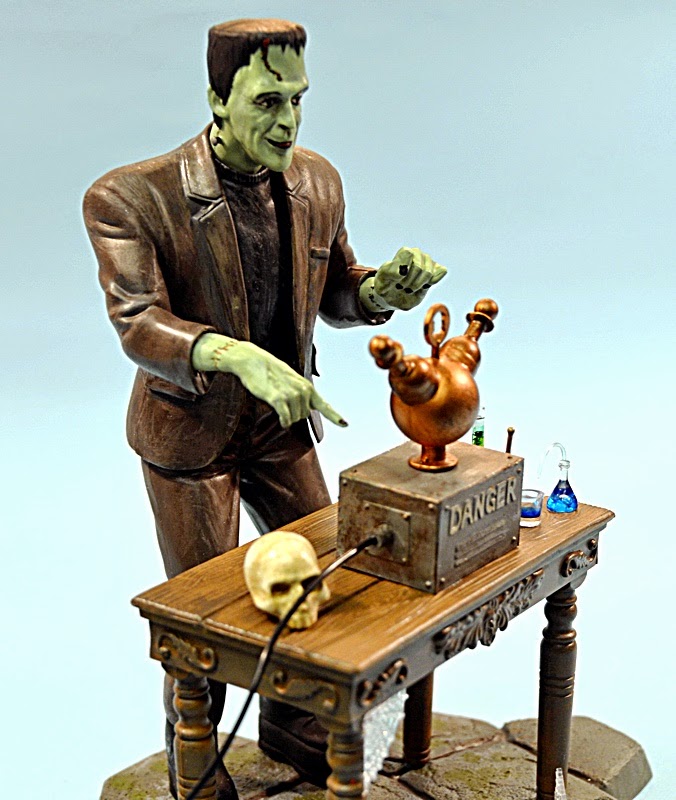 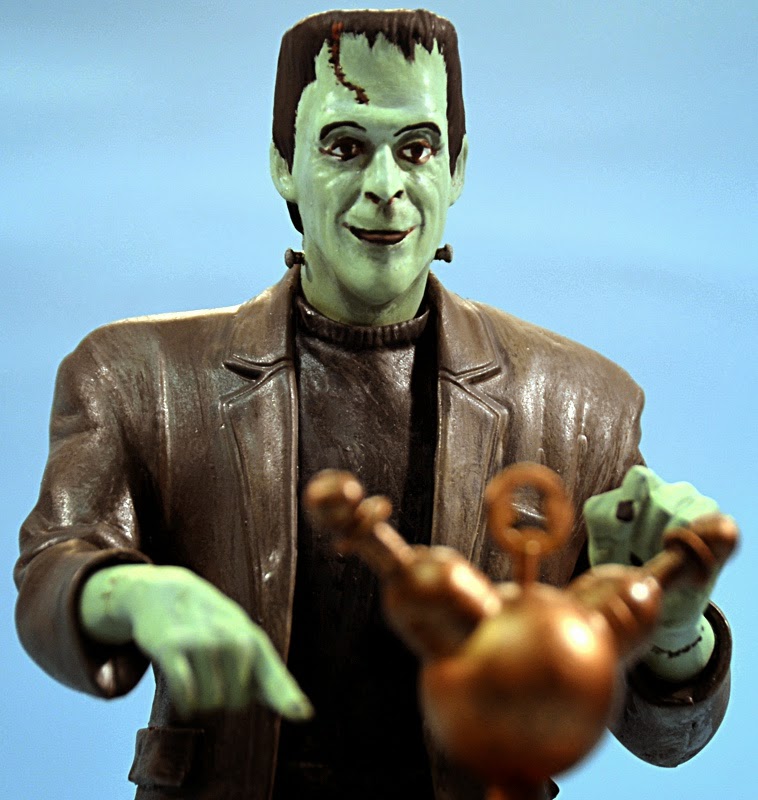 The extra section of base (below) comes from the Grandpa Munster kit, more of which in the near future. Grandpa is several centuries old, so a short wait until his review appears won’t make much difference! 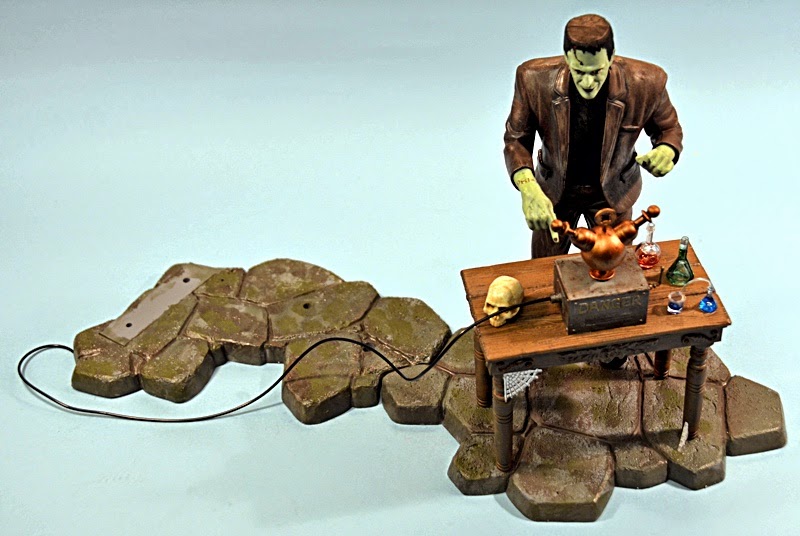 SMN Note: This looks a decent kit of a fave childhood TV series, but the scale is perhaps an odd choice. 1:6 or 1:12 we can understand, but 1:9?

Thanks to Moebius Models for the review kit