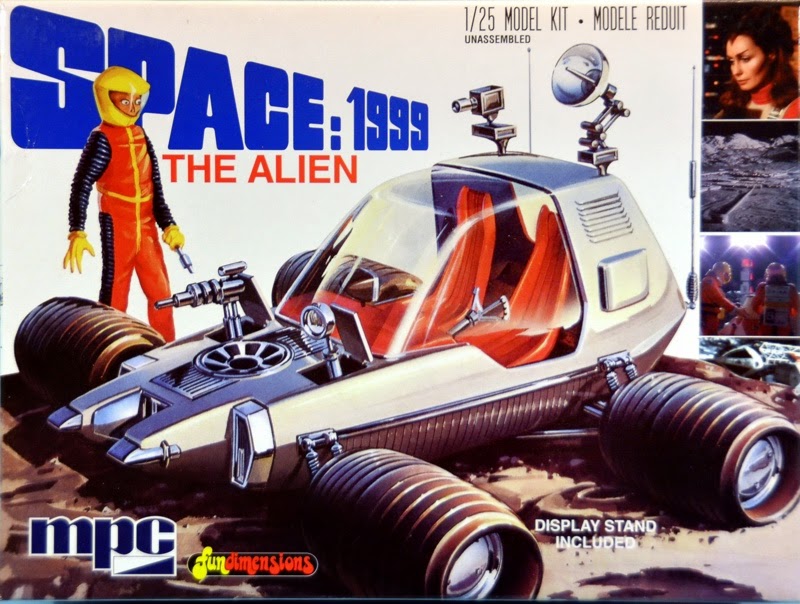 After Thunderbirds, arguably the second most popular Gerry Anderson production was the live-action TV series Space: 1999, originally aired from 1975-77. The series was based around the unlikely premise that the Moon was knocked out of its orbit round the Earth, to become a wanderer in space.


Mat Irvine: As with other Anderson productions, many of the craft and vehicles seen on-screen were bound for reproduction as model kits. Examples from Space: 1999 include the Eagle Transporter, the Hawk warship and Moonbase Alpha. These three were modelled by the original MPC company, but then came the subject of this review, a lunar roving vehicle called The Alien.

But The Alien never appeared in Space: 1999, instead being a small lunar car which used the TV series name for marketing purposes. 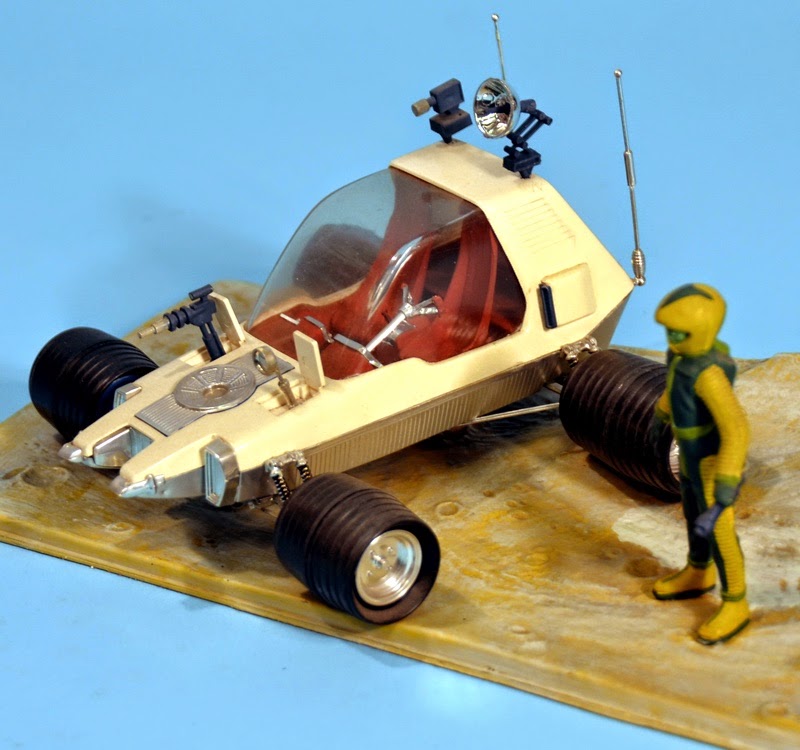 The Alien kit is usually quoted as being a modified Moonscope, which was a semi-practical George Barris custom design for a stylised lunar rover, which MPC had earlier produced as a kit. 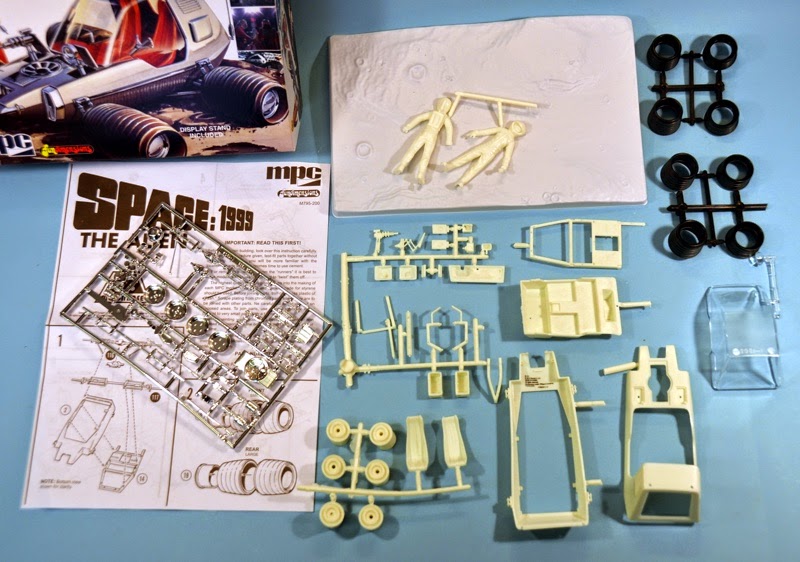 But in reality, The Alien was virtually a brand-new kit. Some elements were copied across, mainly with the interior tub and parts of the chassis, but that was about it. The body itself was new and the Moonscope’s six wheels were reduced to a more conventional four-wheel arrangement.

The 79 components of this latest release of The Alien 1:25 scale kit are moulded cleanly considering their age. Assembly is reasonably smooth, with no major fit or finish problems, though you will have to be careful when removing fairly large chunks of moulding stem, clearly visible in my pic (above).

The rectangular vac-form base makes it easy to produce a diorama featuring the assembled vehicle (below). The MPC Alien’s latest box is not a new design, as it neatly reproduces the original 1977 design. I completed the model (below) without any major modifications. Here the vehicle stands on the supplied vac-form base, with the extraterrestrial figure standing on the right. This can be completed as you like. I gave it a green face with matching spacesuit, rather than the red and black clothing shown on the box. 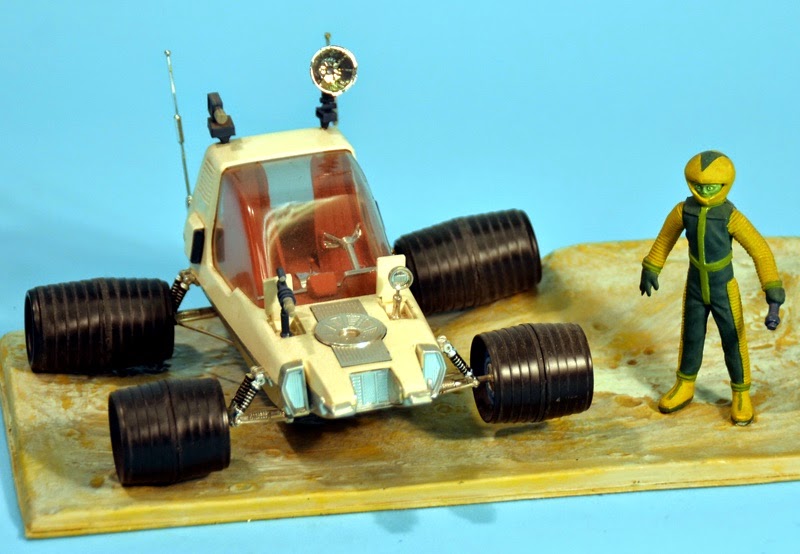 Exactly why this modification was needed seems to be lost in the mists of time. The original Moonscope was issued in 1970, but The Alien’s first issue didn’t come along until seven years later. It would have been more logical (and easier) to reissue the Moonscope, so the change was likely down to licensing, with The Alien being made different enough to become saleable as a new design. 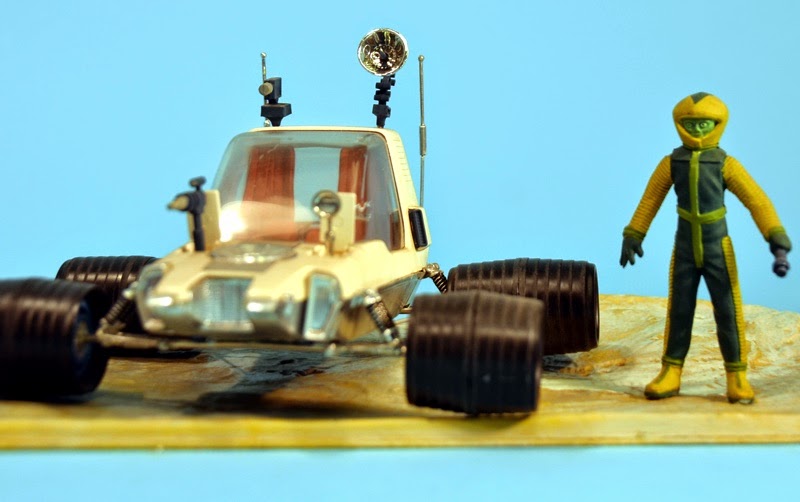 As a kit, The Alien is much like an MPC custom car of the time, albeit retaining the Moonscope’s simulated electric motor and battery pack, rather than a V-8 engine and gas tank. There are chrome-plated front and rear axles, and a two-seat interior. One thing The Alien did have (which the Moonscope oddly didn’t) is a fully-enclosed interior, so in theory it could provide the crew with a shirtsleeve environment. Mind you, the Apollo Lunar Rover didn’t have an enclosed cabin, and was driven by suited-up astronauts. 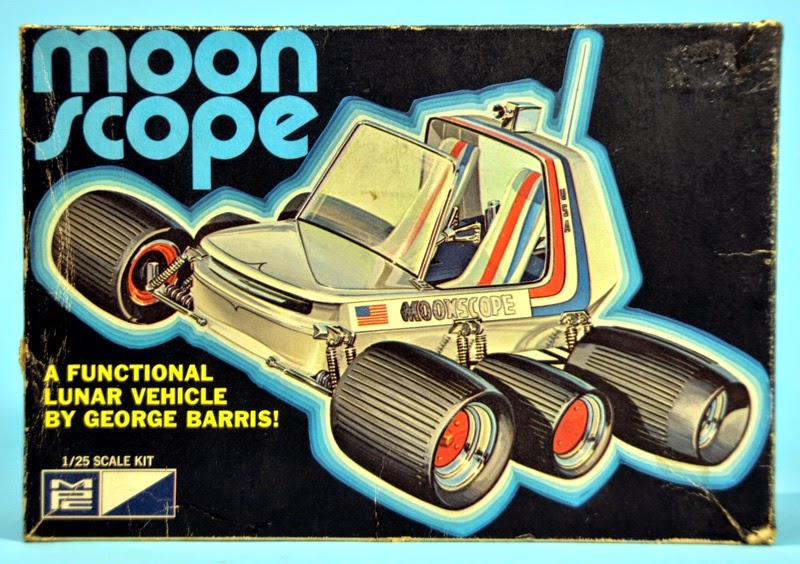 The Alien’s large balloon tyres, again suitable for lunar traverse, are different to those supplied with the Moonscope. The Alien has weapons the Moonscope lacks, but does retain the latter’s communications antennas. 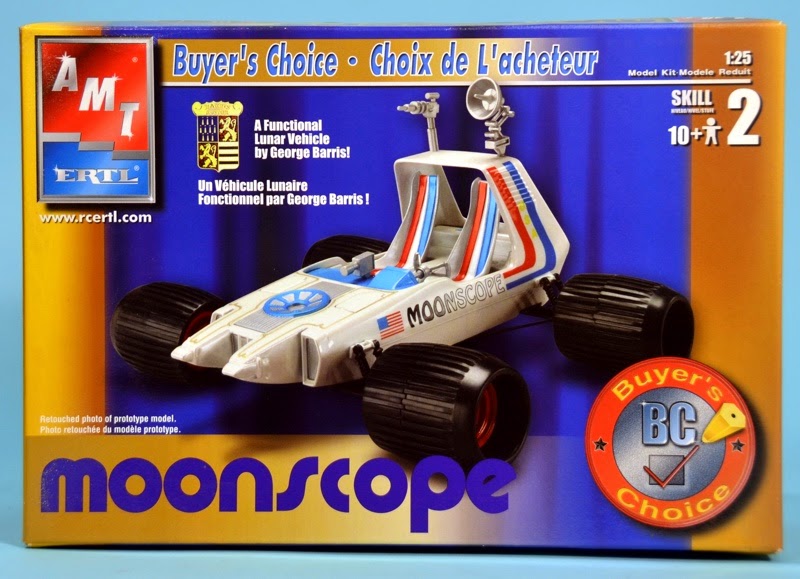 The original kit supplied an alien figure and a vac-form section of lunar surface, and both are retained in this issue. What is new this time around is that while the box-top retains the original artwork, what used to be dead space, the box base, is now used to give the model maker more detail about the kit. 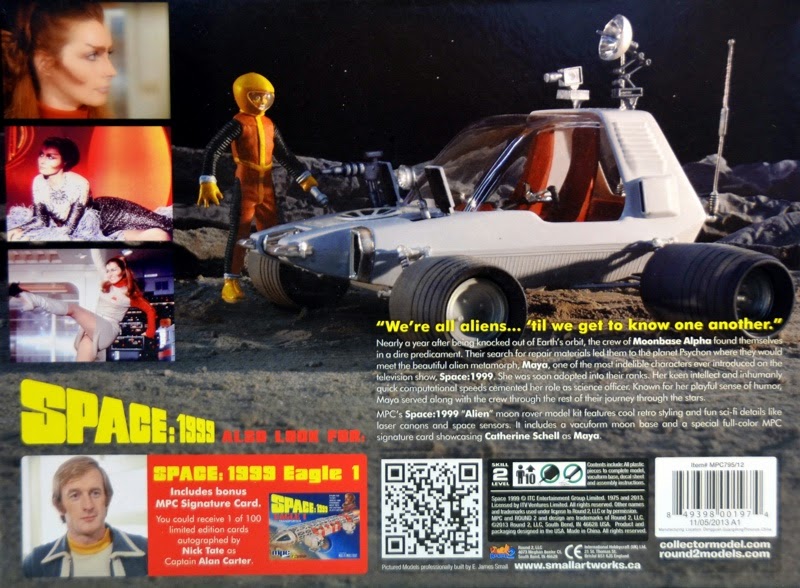 The new MPC Alien kit has also been tied into a specific Space: 1999 character, Maya, played in the series by Catherine Schell. I should point out that she is not the subject of the plastic figure supplied in the box - this is a different entity altogether - but as she was the only continuing alien character in the series, it does link the kit slightly more to the show than the original issue ever did. The pack designers have also taken the opportunity to present a photo of the finished model on suitable lunar background, again new to this issue.

Also new is a card (below) featuring actor Catherine Schell. Some kits also have a limited edition in which the card is signed, but finding one of these is purely by chance. 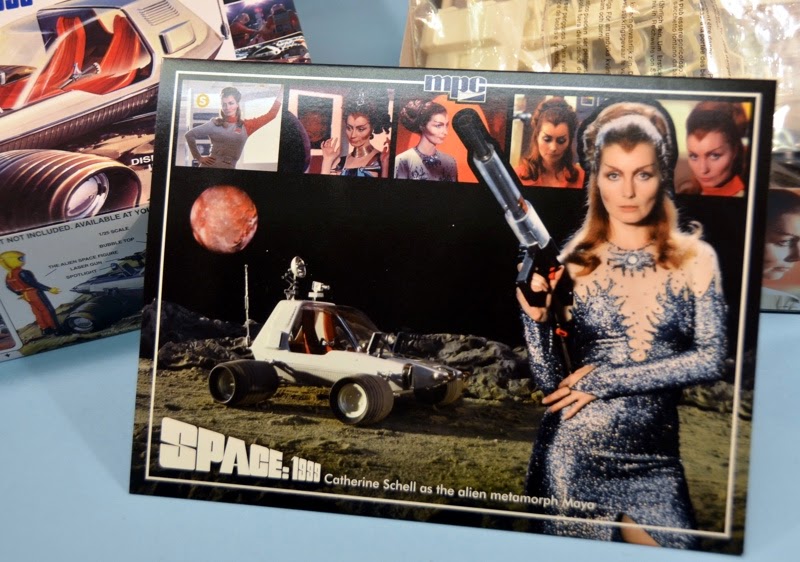 Moonscope or Alien?
The Moonscope was reissued by MPC’s previous owners, RC-2/Ertl, a few years ago - except that it wasn’t. That release was actually a reissue of The Alien, without base or figure, not the original Moonscope. Most likely, the tooling inserts that would have been in the steel mould to make the original parts either could not be found, or have been permanently lost. Consequently, unless retooled, the original Moonscope has to be regarded as a ‘lost kit’. 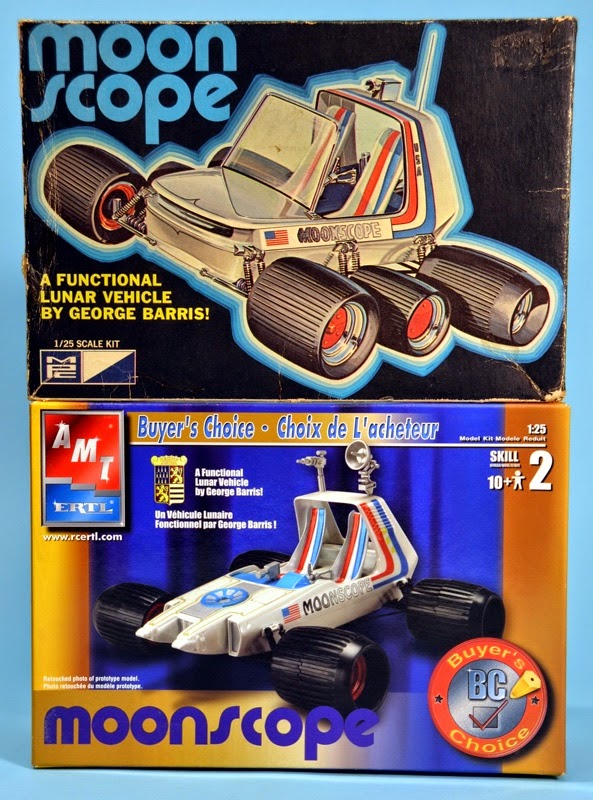 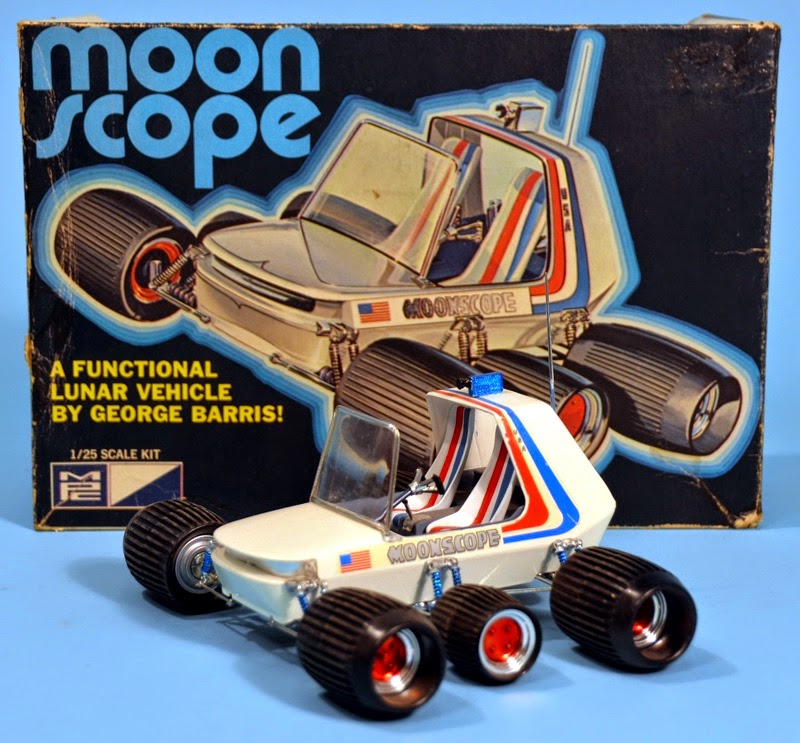 The original Moonscope box (above) and ‘new’ one (below) which was a basic reissue of The Alien version. 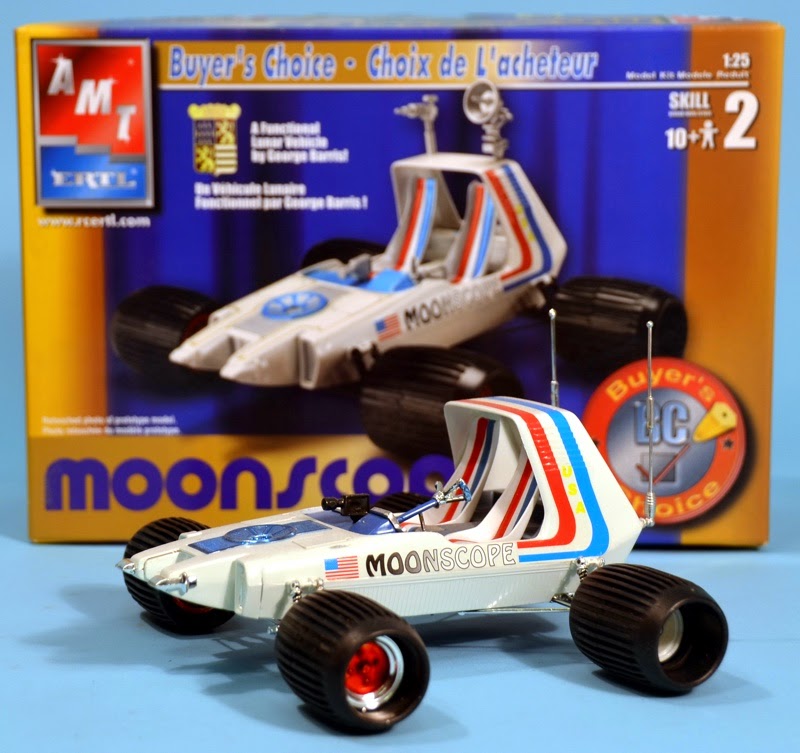 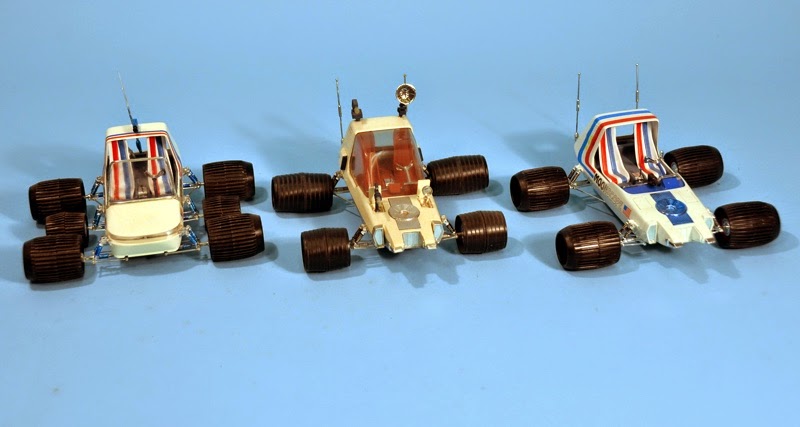 Views (above, below) of the assembled original Moonscope (left) The Alien (middle) and new Moonscope. Differences between them include the varying body shape and number of wheels. The new Moonscope (right) does not have an enclosed interior, nor the six wheels. 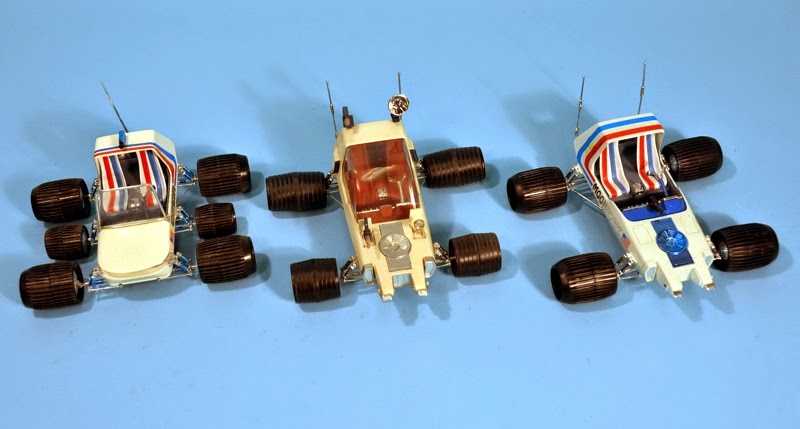