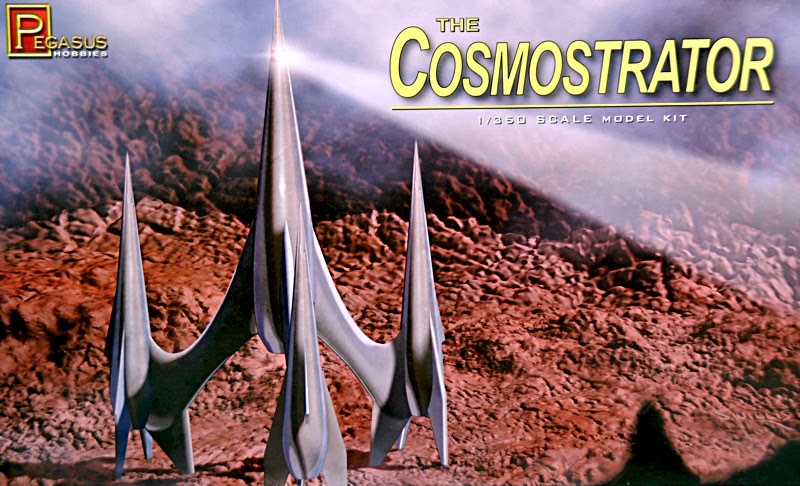 HERE’S A PUZZLE - WHICH SPACESHIP TAKES THE PRIZE for the most distinctive science-fiction craft ever designed? Star Trek's USS Enterprise or the Blake’s 7 Liberator? Star Wars X-Wing or the Millennium Falcon? A strong quartet for sure, but here’s another, lesser-known design, the sleek multi-finned Cosmostrator which starred in the 1960 movie First Spaceship on Venus.


Mat Irvine: Pegasus Hobbies has now added this distinctive spaceship to its list, with both kit and a ready-built versions available to purchase. The Cosmostrator is to 1:350 scale, which seems to have become a default scale for ‘large structures’ probably helped by its wide use as a standard nautical model scale. 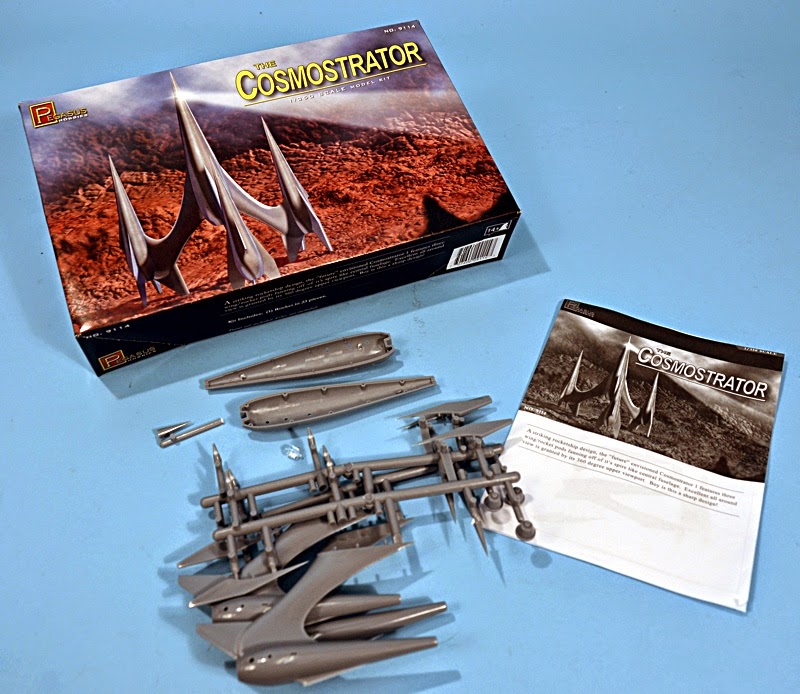 The design of the Cosmostrator is fairly typical for the late 1950s, with a sleek aerodynamic shape, rather than the nuts-and-bolts realistic look exemplified by the later Discovery One from 2001: A Space Odyssey. 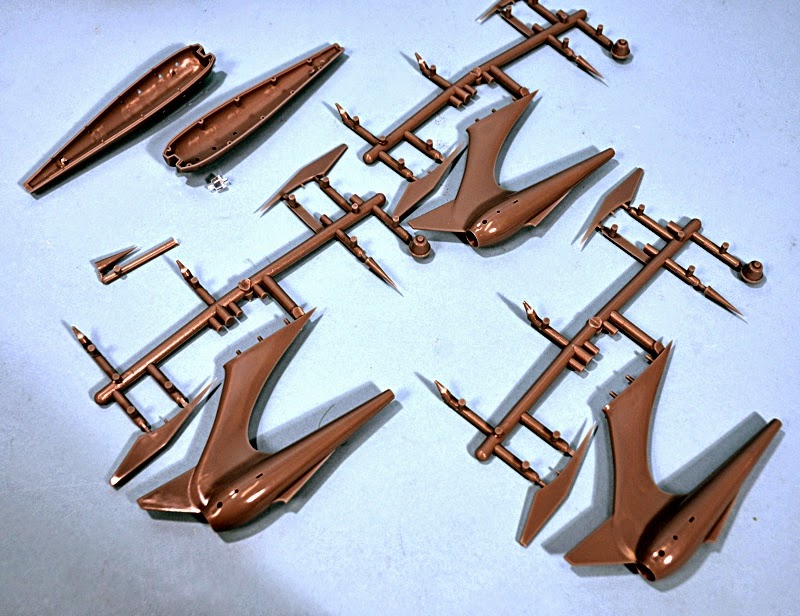 Despite Cosmostrator’s multiple fins, the parts count of this Pegasus kit is just 22 - four for the main hull, including a transparent cabin panoramic window, and six each for the three pods. The instruction sheet actually shows the central hull with five parts, including a separate engine nozzle, but this is now moulded in with the hull halves. 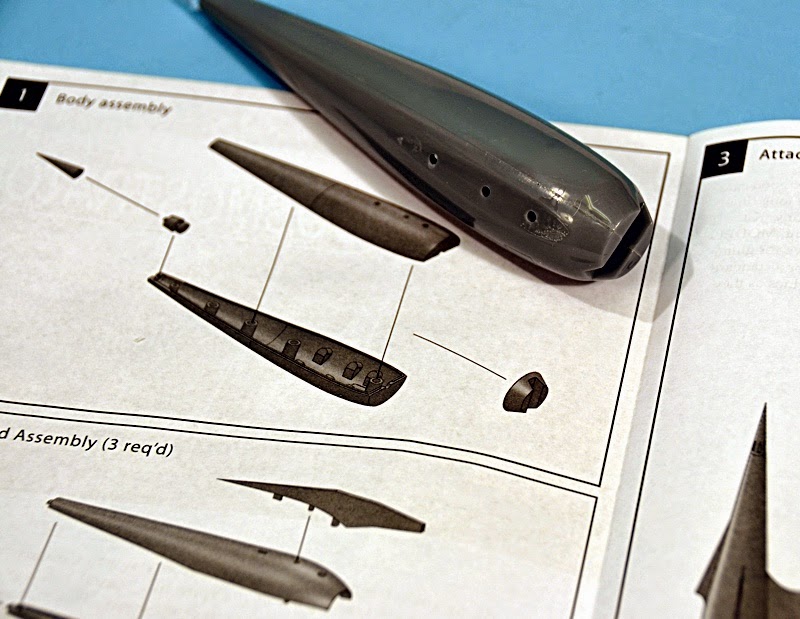 That low parts count means that assembly time is short. The component fit is good, though you may need to use a small amount of filler to smooth the seams where the outer sections connect to the main hull. 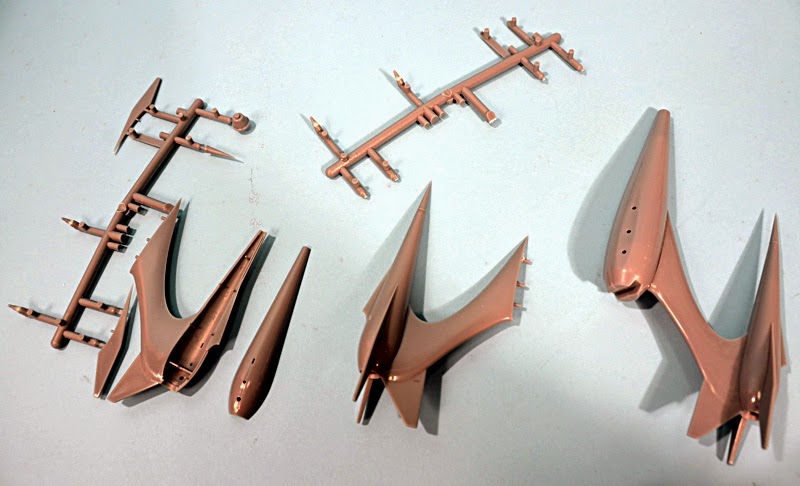 As for the Cosmostrator’s finish, this is also straightforward. To paraphrase the immortal words of Henry Ford, “You can have any color you like, so long as it’s silver.” The ready-built version comes finished virtually chrome-plated, though personally I find this a little too bright to be realistic. 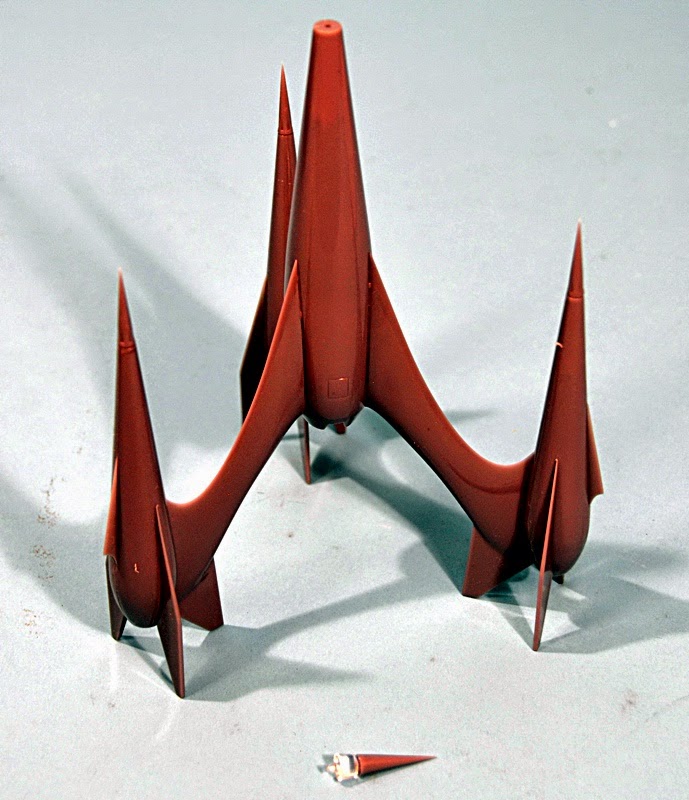 For the assembly kit, I opted for a coat of Testors Chrome, which admittedly is also a bright finish. It’s the best chrome-from-a-can that I know, but for this purpose it looks even better for an oversprayed mist coat of Testors Polished Aluminum. This doesn’t change the basic chrome look, but does knock it down a bit, for a less in-your-face appearance. 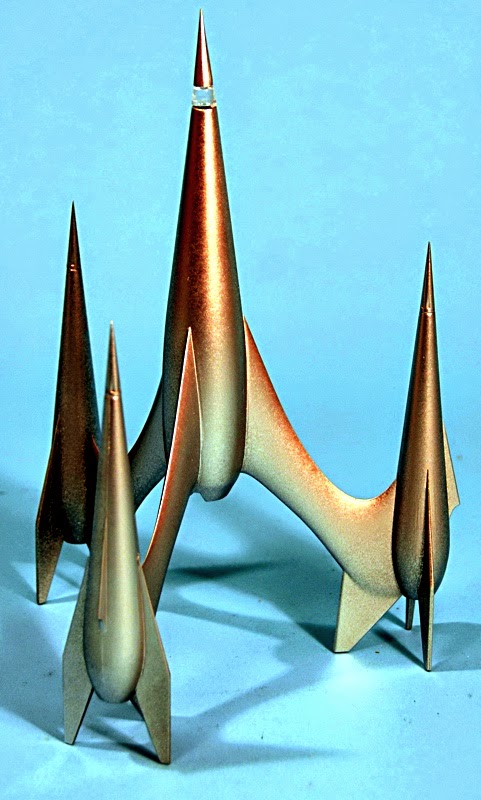 The Cosmostrator begs to be displayed on a decent diorama landing zone, though at the time of the movie, no one knew what the surface of Venus looked like. It wasn’t until Soviet Venera probes soft-landed in 1970 that we found out that Venus is more like a vision of hell than the comparatively tranquil landscape depicted in First Spaceship on Venus. For this diorama, I created a rough textured surface treatment, with a plain blue backdrop for the sky. In the movie, there are plenty of shots with swirling cloud and mist, so it would be possible to include these by adding a cloudy layer in Photoshop. Mind you, that works for a digital image, though it's not so easy for a model display. So on balance, the simple plain background has probably worked out best - and it’s easier, too. 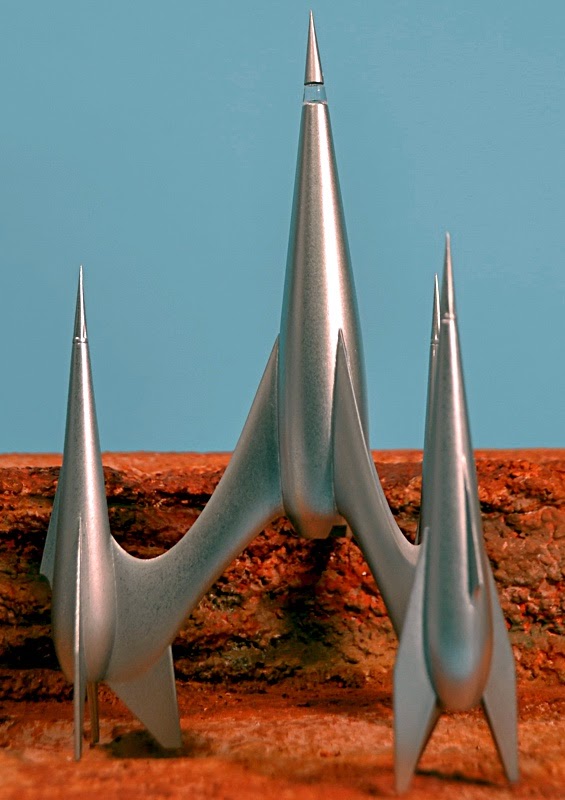 For more on the Cosmostrator, and the movie in general, I can recommend Spaceship Handbook written and illustrated by Jack Haggerty and Jon C. Rodgers. The book features a whole section on the movie, and drawings of the ship. Click below or at the bottom to see it at Amazon.

View the movie First Spaceship on Venus here. The script isn’t much, but the effects are worth a look, if only for historical interest. And you do get to see plenty of robotic tech as well.

And finally, is this is first Cosmostrator kit? Actually, no. Lunar Models has the distinction of being the first garage company to specialise in science-fiction subjects, and the Cosmostrator featured in its 1989 catalogue. The kit (below) was considerably larger at 1:144 scale, and was made from solid resin, almost certainly the older, and less easily worked, polyurethane. However, although mastered by the expert pro-modeller David Merriman, it did take quite a lot of effort to make it look good. The new Pegasus kit makes the whole job far easier. 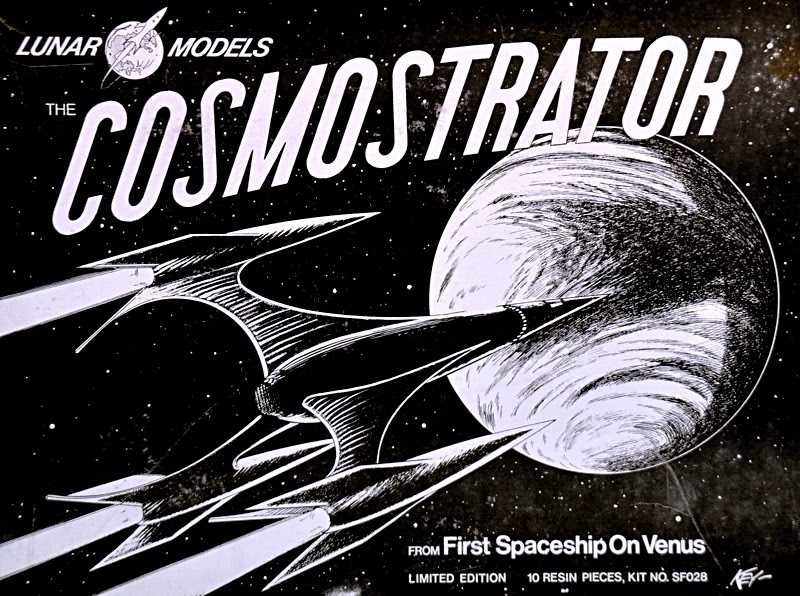 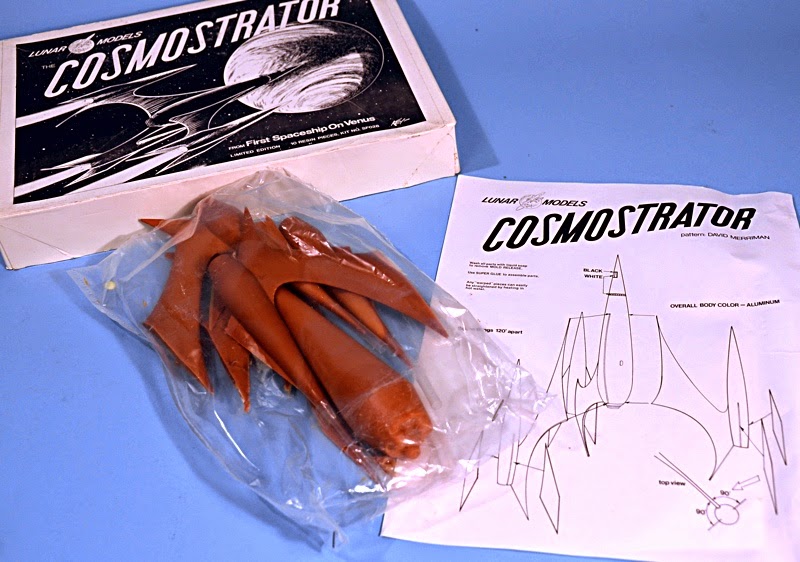 About the movie
The Cosmostrator originated with an East German/Polish co-production, based on a work by Polish writer Stanislaw Lem, better known for his classic Solaris. 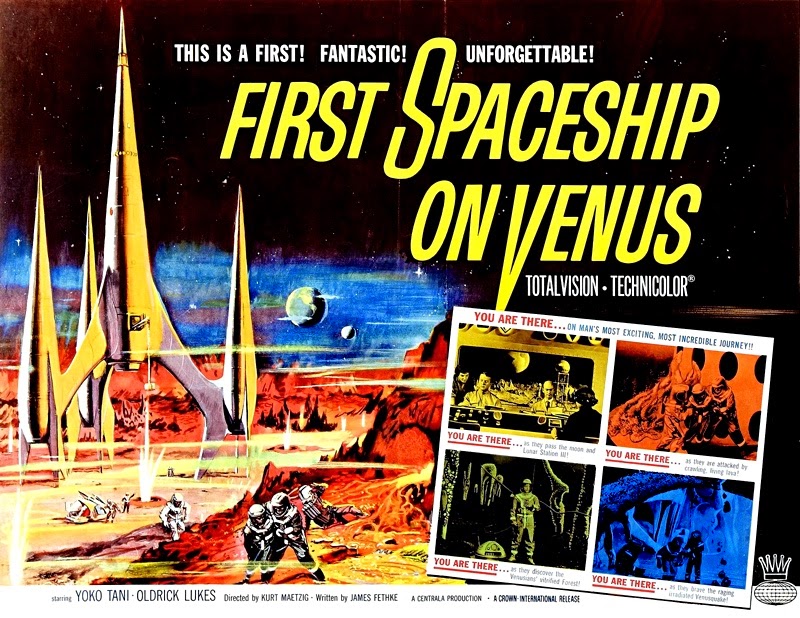 First Spaceship on Venus was based loosely on Lem’s 1950 story Astronauci (the Astronauts), published in English as The Planet of Death. First Spaceship to Venus was released in German as Der Schweigende Stern (The Silent Star) at which point the ship was called Kosmokrator.

The movie was then edited and dubbed into English, primarily for the US market, with the spaceship’s name anglicized to the familiar Cosmostrator. 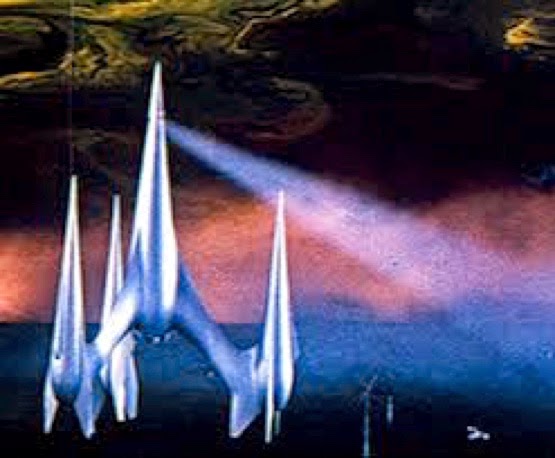 Thanks to Pegasus Hobbies for the review kit.