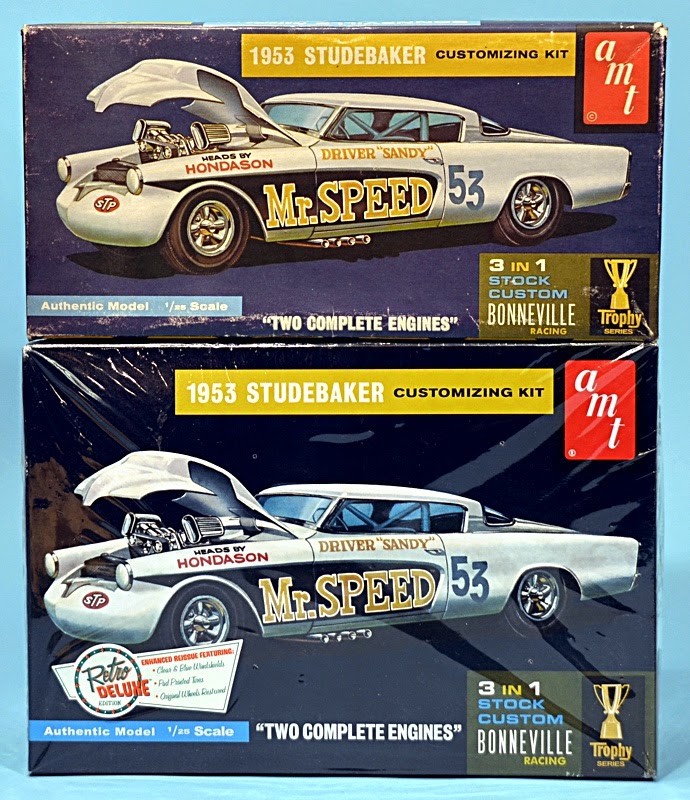 THIS IS A VERY WELCOME REISSUE of one of AMT’s classic Trophy Series kits from the 1960s. The kit has seen several releases in a variety of forms over the years, but this issue returns the kit to the original parts layout, allowing a modeller to build one of three versions - stock, custom or competition.  Our header pic shows the original box (top) with the bigger new release (bottom).


Mat Irvine: The AMT Trophy Series had plenty of detail - underside and steerable front wheels, and exhaust system. This was unlike the ‘Annual’ kits that AMT made at the time, which usually had a simplified chassis, drivetrain and exhaust system.  Old and new boxes for the 1953 Studebaker are shown (below) the bigger new one at the bottom. 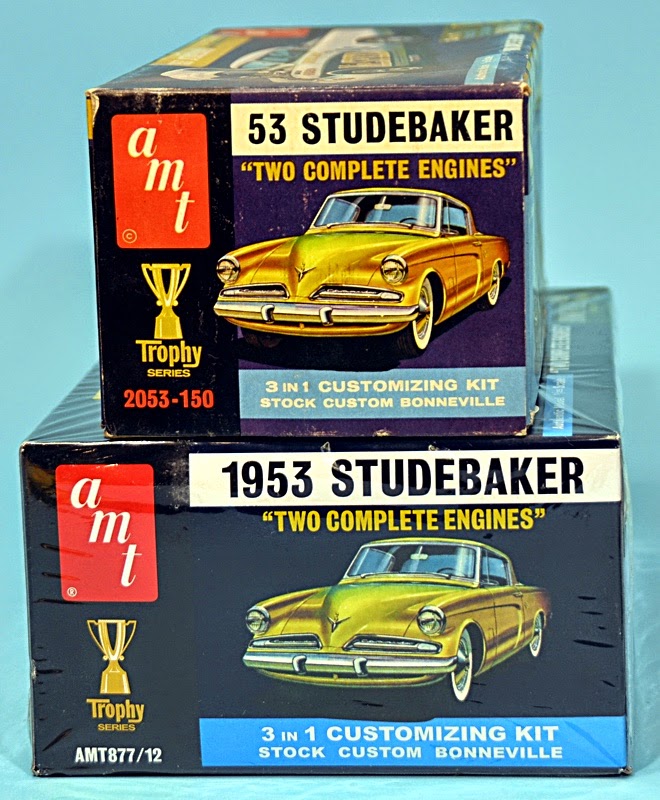 With this latest 1:25 scale 1953 Studebaker, AMT has returned to the original white plastic components (other reissues have been moulded in light grey) and this makes applying any top-coat colour very easy. The layout of parts (below) shows the new blue-tinted transparent parts (foreground) in addition to the standard non-tint versions. And note the return of the ‘Mr Speed’ markings to the decal sheet. 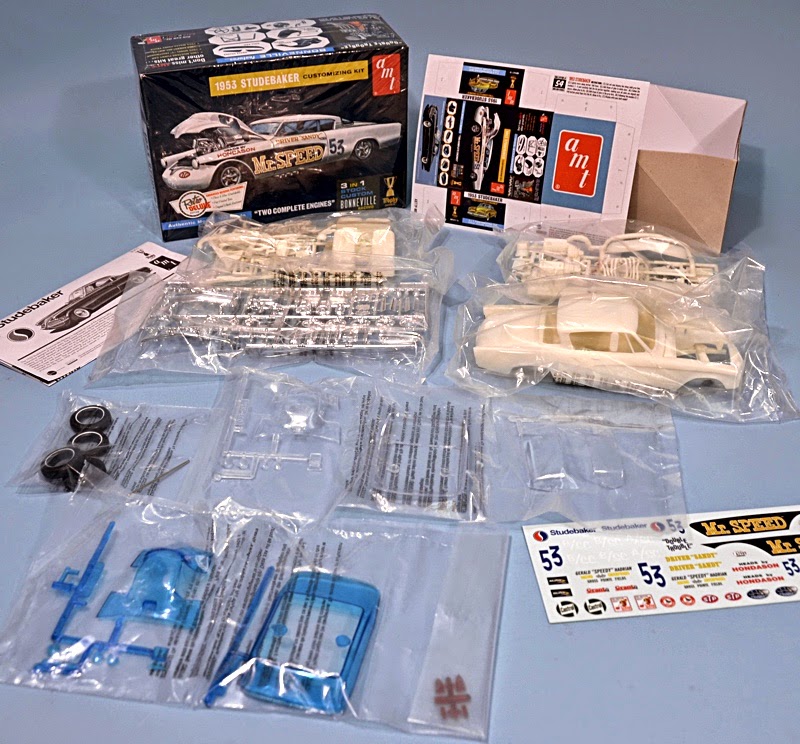 The Studebaker kit returns with the famous ‘Mr Speed’ decals to decorate the Bonneville racer version. For this, you also get a large Chrysler V-8 engine block, as an option to the stock engine, with not one, but two superchargers. This alone has made the kit popular with modellers for use in other builds - and will doubtless be just as useful this time round.

The well-packed original kit (below left) compared with the reissue. It was a wonder that they got all the parts into one of these original boxes. In fact, there was the urban myth (possibly well founded) than once you’d unpacked an original AMT, you could never get the parts back in, or the box lid on securely! Could this be a reason for today’s larger boxes? 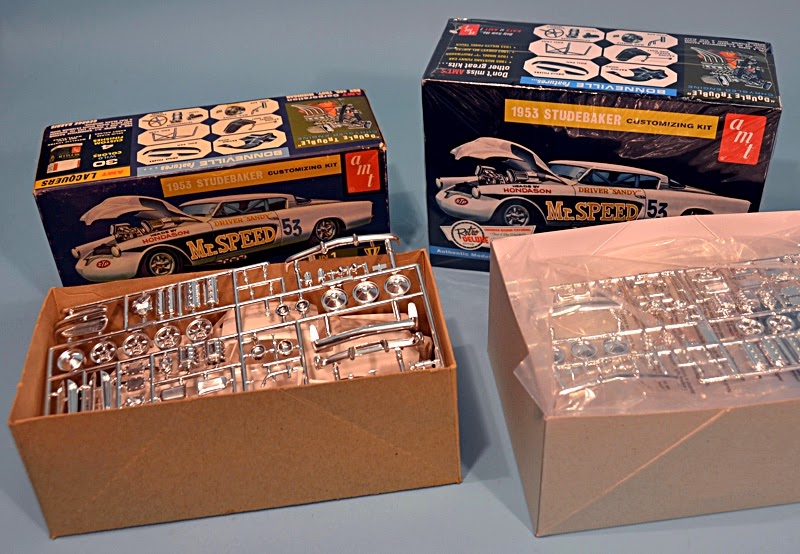 You also get the option of a chopped top to lower the roof, and this can be used with either custom or competition versions. And if you build the car as a stock version, well, you will have a model of one of the most iconic and stylish cars ever built. The built custom (below) shows off its chopped roof. 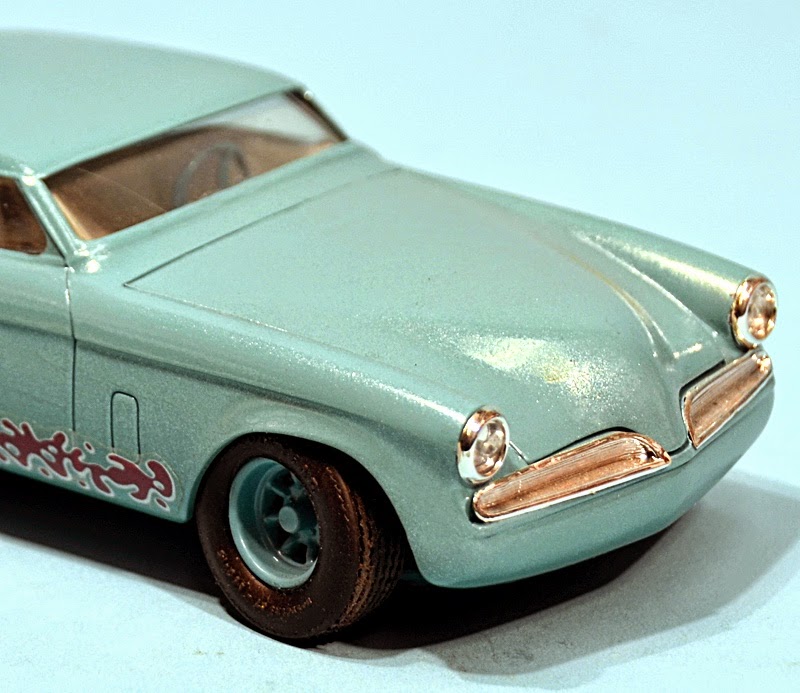 The assembled stock version (below) of the 53 Studebaker looks drop-dead handsome, as did the real thing when it was cruising the streets. 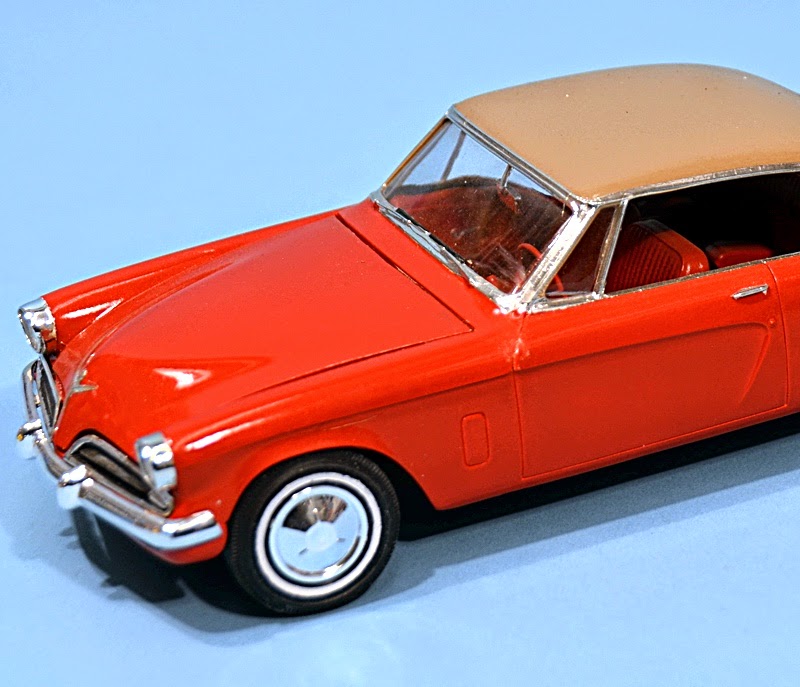 Built as the great-looking Bonneville racer (below) and sign-written with Mr Speed decals on the flanks. Note the side-mounted exhausts. 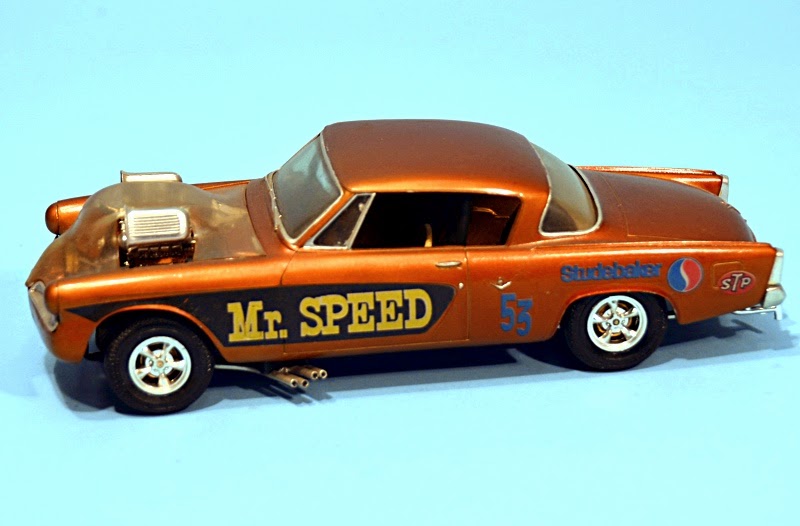 I’ve already built all three versions over the years. The Mr Speed one goes back to the very first issue, but you never know - I could be tempted to build a fourth! 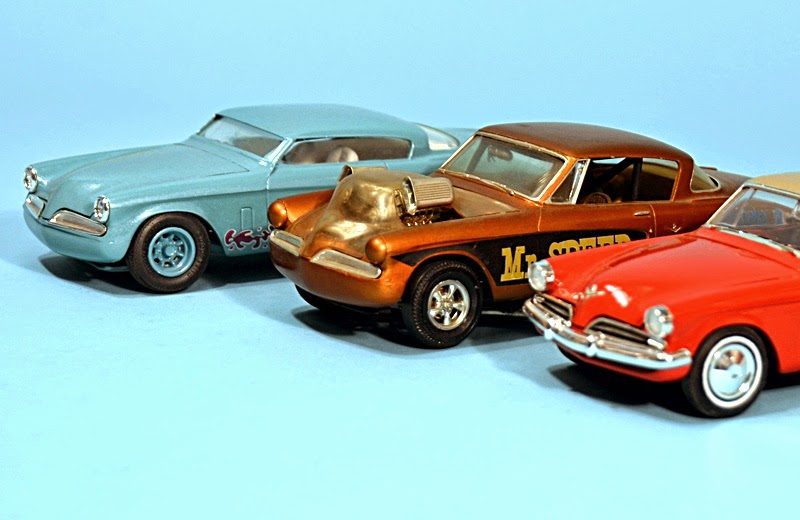 If you are a Studebaker fan, it has to be worth getting a trio of kits (above, below) and building all three versions - they look terrific lined up on display. 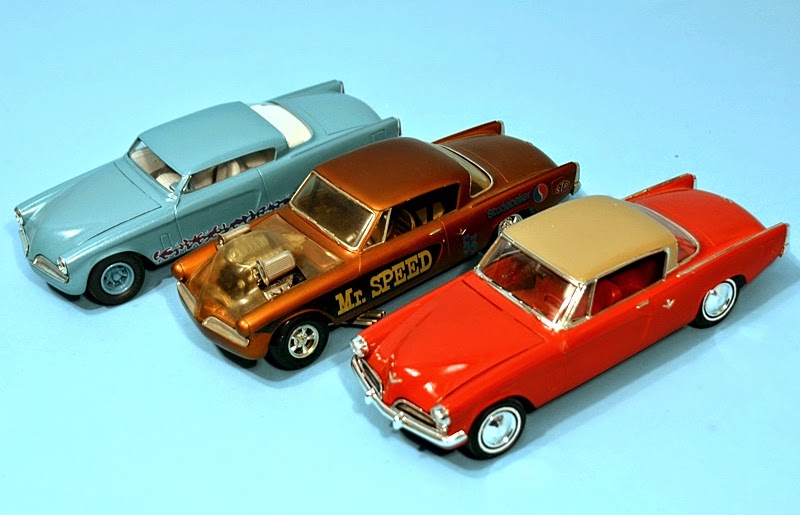 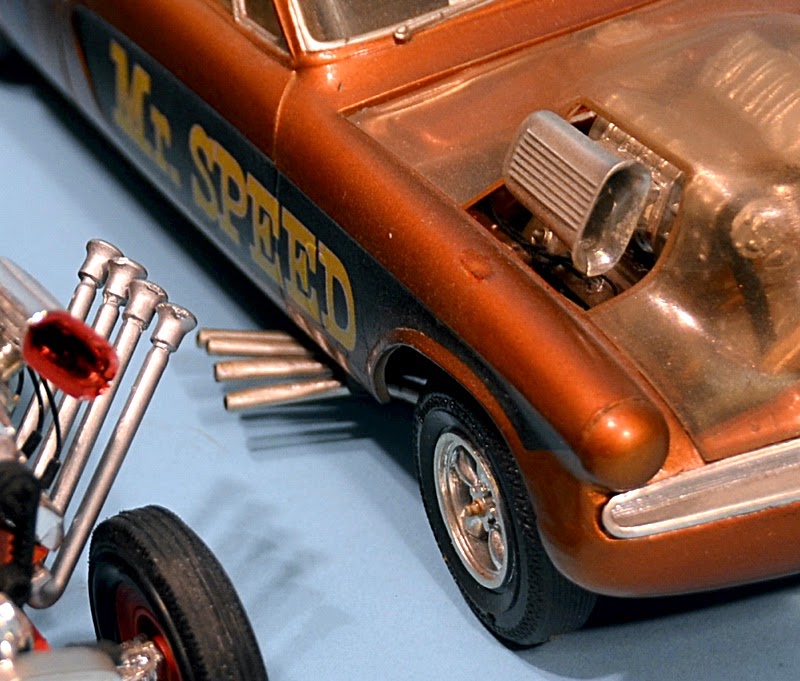 I reused the twin blower V-8 Chrysler engine in a Rat Rod (above, below) as featured in my book Scale Car Modelling. 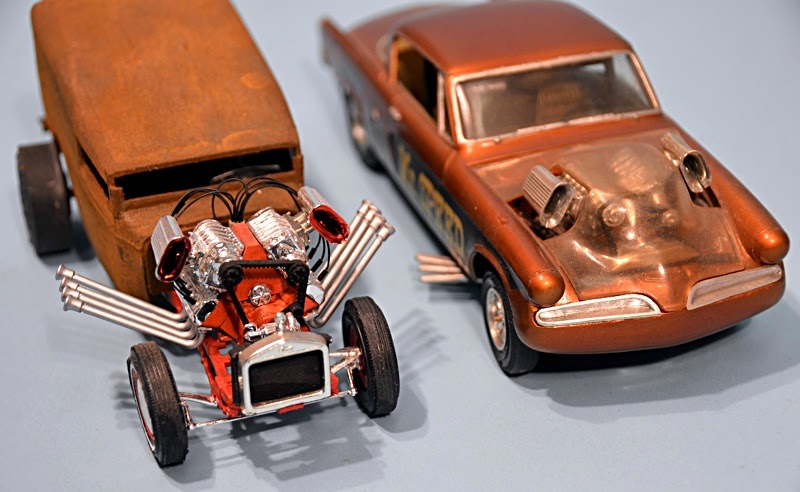 Two other issues (below) that have been released over the years. Box art got very bland in intervening years, as shown in the lower example. Thankfully, there has been a return to the more interesting style of the 1960s, as depicted in the Double Whammy version, and the new Mr Speed reissue. 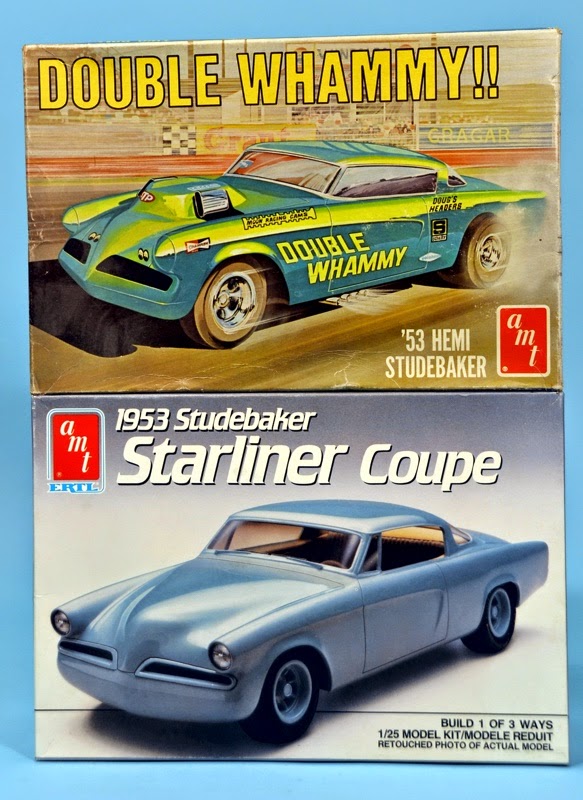 Last but not least, a box inspection (below) reveals that the original (upper) advertised AMT’s own spray lacquers, which have long been unavailable. The ad for them is omitted for the reissue. The original AMT Corporation did a wide range of over 30 colours and finishes. It's a pity they can’t be reintroduced. 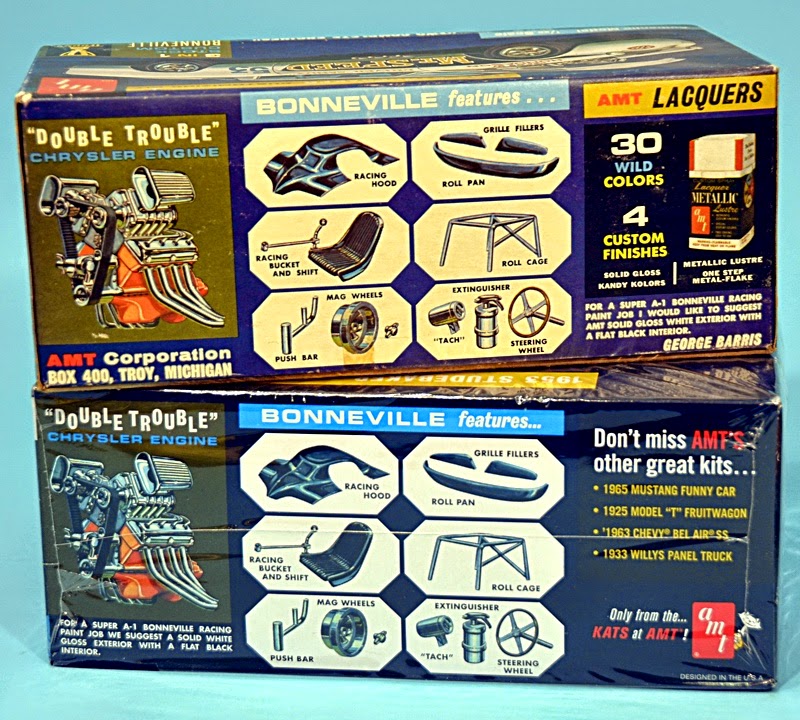 The other side panel (below) shows the same illustrations on both boxes, though note that the original box has yellowed somewhat over the years! 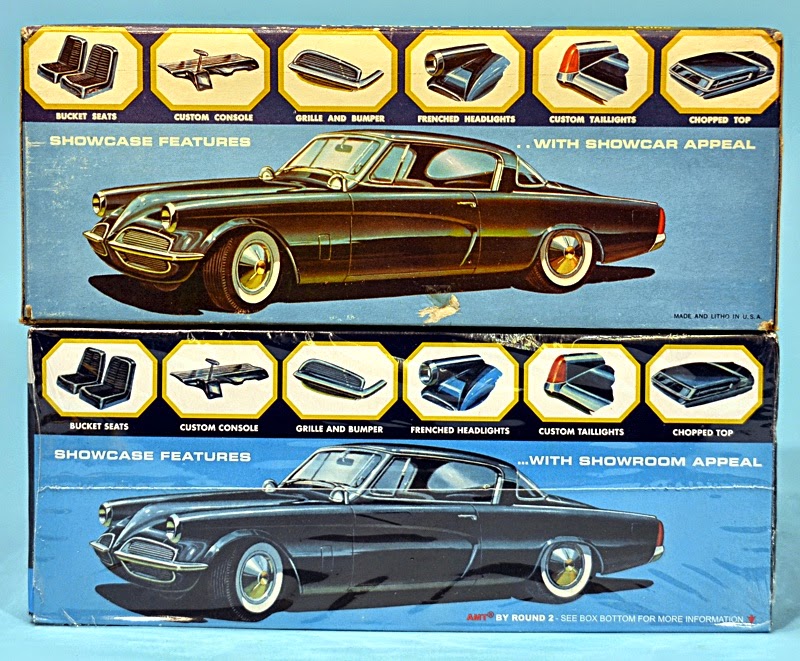