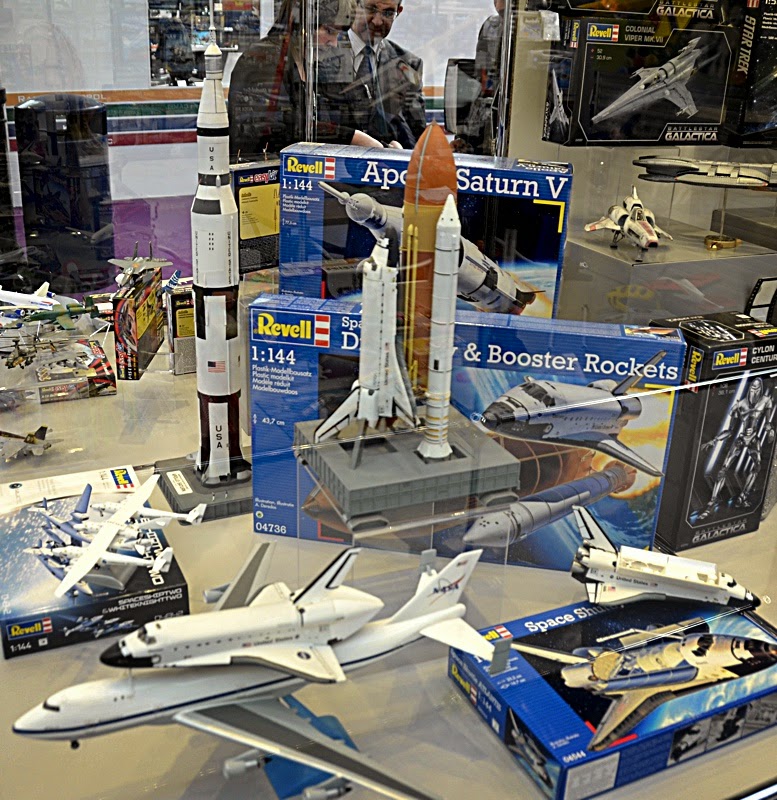 THIS SPACE AND SCIENCE-FICTION ROUNDUP concludes our review of Revell kits on display at the 2015 London Toy Fair. It's a good range with plenty of choice, whatever your interest.


Mat Irvine: Unlike Airfix, which has no space kits in its 2015 range, Revell continues with a selection that includes the 1:144 scale Apollo Saturn V (header, below). It's an impressively large kit when assembled, though the display model here still shows the incorrect lettering for 'USA' and 'UNITED STATES' in black. This was an error that crept in when the model was issued by Revell-Monogram a few years ago, from where the display model originated. Fortunately, Revell Germany corrected this for the new release, so just to confirm that you get the decals with this lettering in the correct red colour.

The Space Shuttle may have stopped flying in July, 2011, but that hasn't stopped Revell making three 1:144 scale kits available. The Space Shuttle Discovery and Booster Rockets kit includes a decent representation of the massive transporter/launcher. The Boeing 747 carrier plane looks hugely impressive with an Orbiter on its back, while the Orbiter on its own looks good with its long, bay doors wide open.

The Revell 1:144 scale SpaceShipTwo and WhiteKnightTwo combo-kit (below) is still available. Virgin Galactic's carrier plane and suborbital craft are both somewhat odd-looking creations, and the Revell kit reflects their looks very well indeed. For space fans, the weird wing ensemble is a must-have, especially as the kit is made to standard model airliner scale, and of course matches the Revell Saturn V and Space Shuttle kits. 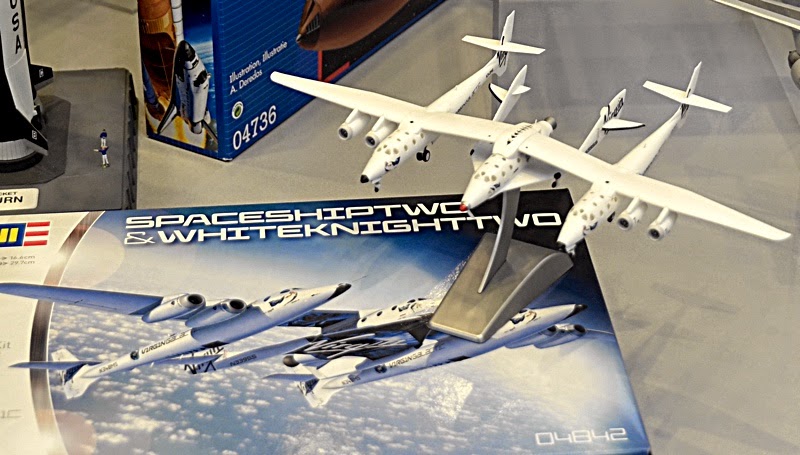 The latest incarnation of the Star Trek USS Enterprise NCC-1701 (below) as featured in the re-imagined movies directed by JJ Abrams. The kit is made to 1:500 scale, giving it a fully-assembled length of some 588 mm (23.2 in). 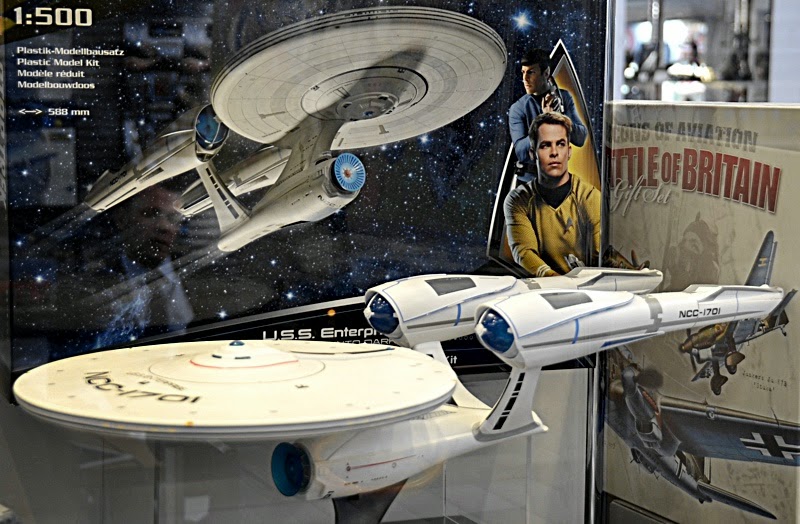 The classic USS Enterprise from the original TV series (below). This kit is to 1:600 scale, making almost the same size as the very first such kit, from AMT. 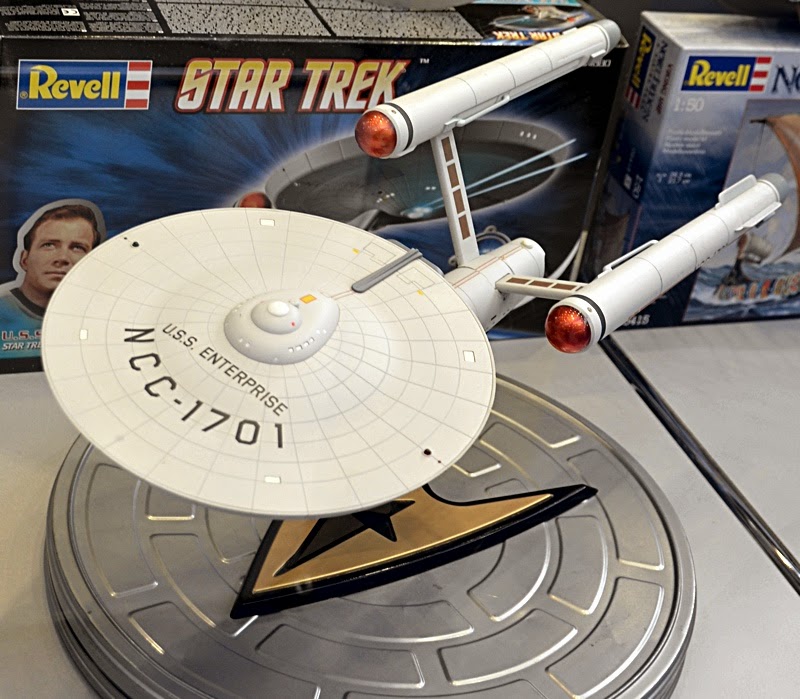 Revell has repackaged Moebius science-fiction kits (below) for the European market. The Battlestar Galactica assembles to a length of 338 mm (13.3 in) which makes it 1:1405 scale. The single-seat Colonial Viper Mk VII shown on the box top is physically only a little smaller, at 309 mm (12.1 in) long, but that makes it to the useful and widely-used 1:32 scale. The assembled model in the pic is the retro Mk II, as per the design in the original series. 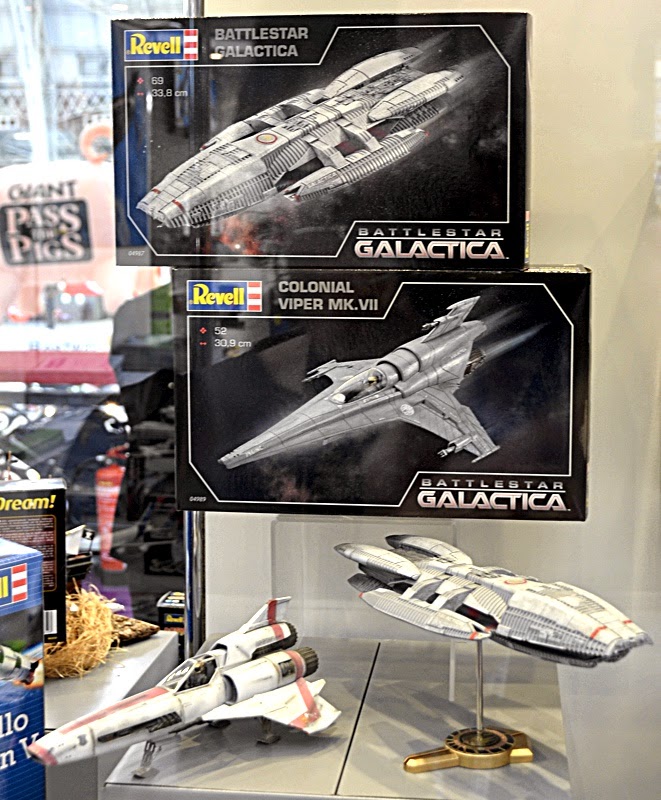 The somewhat bandy-legged Cylon Centurion (below) is another repackaged Moebius kit. But for fans of Battlestar Galactica, it's a useful addition that stands 361 mm (14.2 in) high when assembled, making it about 1:6 scale. 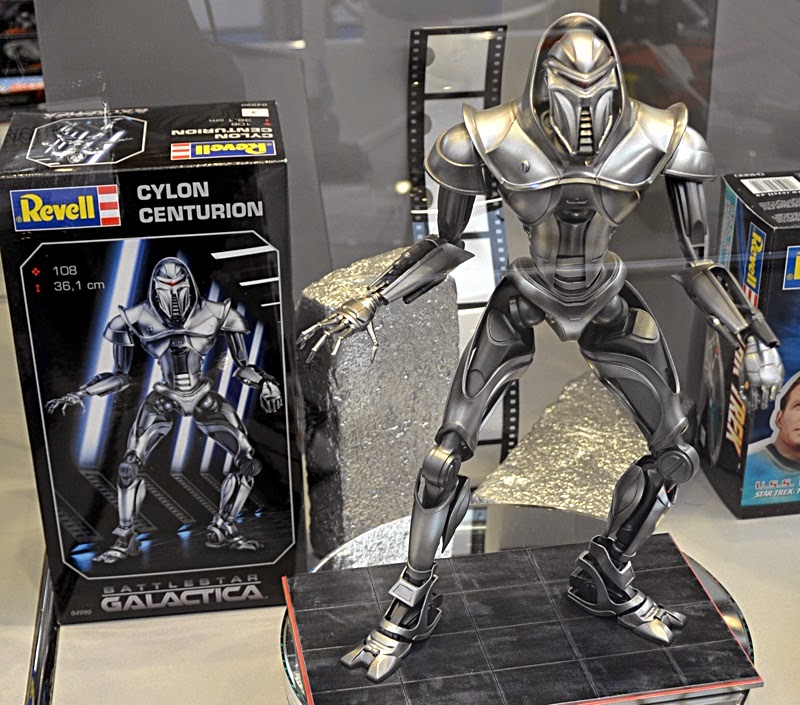