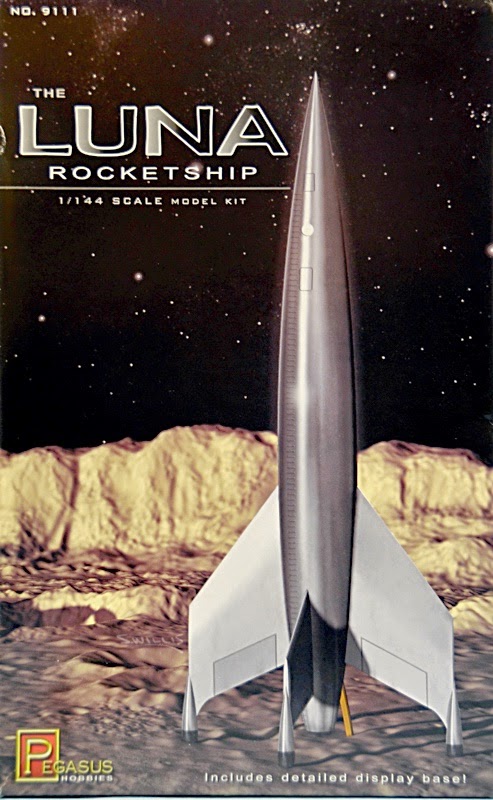 WE’VE FEATURED THE LUNA rocket from the 1950 movie Destination Moon before, but this new kit from Pegasus Hobbies assembles to make the tallest model yet. Luna comes in the accepted rocket scale of 1:144, so can be stood next to a Space Shuttle or Saturn V for comparison.


Mat Irvine: The Luna rocketship had a classic 1950s streamlined rocket shape, and reflecting this, the kit is simple in construction. The model is moulded in Pegasus Hobbies’ usual ABS plastic, rather than styrene, which is tougher, and gives a shinier finish. The kit is intended to be cemented together, but the mouldings are accurate enough that it could almost be a snap-tight model.

Assembly is an easy matter with few parts (below). The plastic lunar regolith base is a neatly sculpted and moulded item. 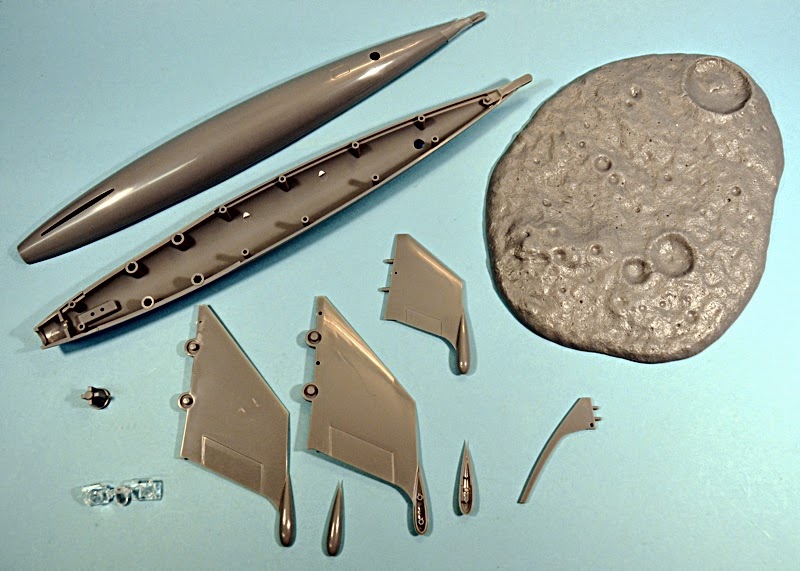 As was also common for the 1950s, Luna in the film had an overall silver finish. Pegasus recommends silver/chrome, but I feel this is a tad too bright. Testors Chrome would be a good choice, but Humbrol has introduced chrome in its new acrylic spray range, which is less bright but I feel works better.

The only break in Luna's colour scheme are the lowest tips of the landing legs, which should be finished in black, and two small cockpit portholes, which are supplied in transparent plastic. These fit from the inside, so have to be fitted in place before the two hull halves come together. A tint of blue on the portholes helps the finished appearance of the model. 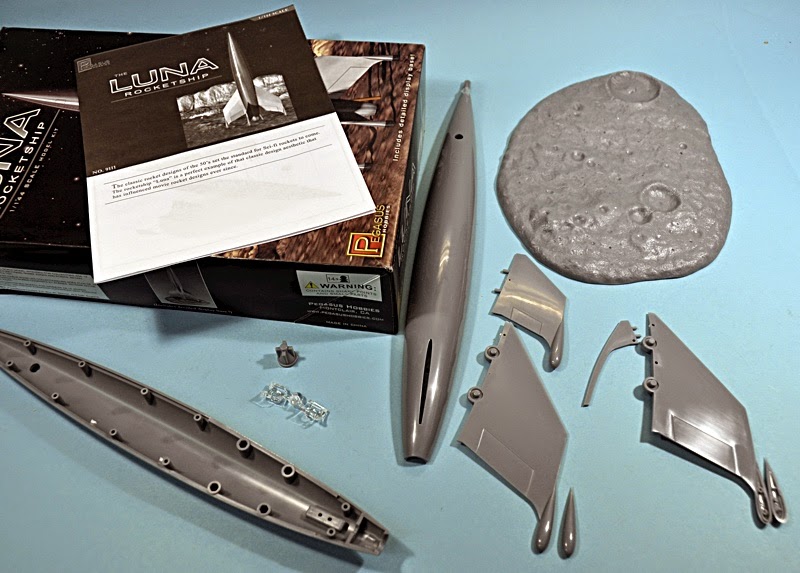 When the portholes are fitted and the fuselage halves joined together, mask the ports before you paint. You can use specialist masking tape, or even a small piece of Blu-Tack, as I did here. Don't use Plasticine though, as unlike Blu-Tack, the paint won’t dry on it and you’ll end up with a soggy mess.

The only other colour change needed is to the ‘fourth leg’ which was added to the original for technical reasons. Although the ship will just about stand on its three landing legs, it really is only ‘just about’, and successfully landing such a craft vertically would have taxed even the most expert pilot.

So the movie designers added the extra leg, which would supposedly fold out from the hull, rotating 180 degrees downwards as it did so. Oddly enough, its colour did not match the rest of the ship, instead being a shade of brick-red.


The sharp tips of the hull halves (below) are protected by these ‘keepers’, which just lift out. They are a neat touch that makes assembly somewhat easier, and certainly stops and breakages before assembly. 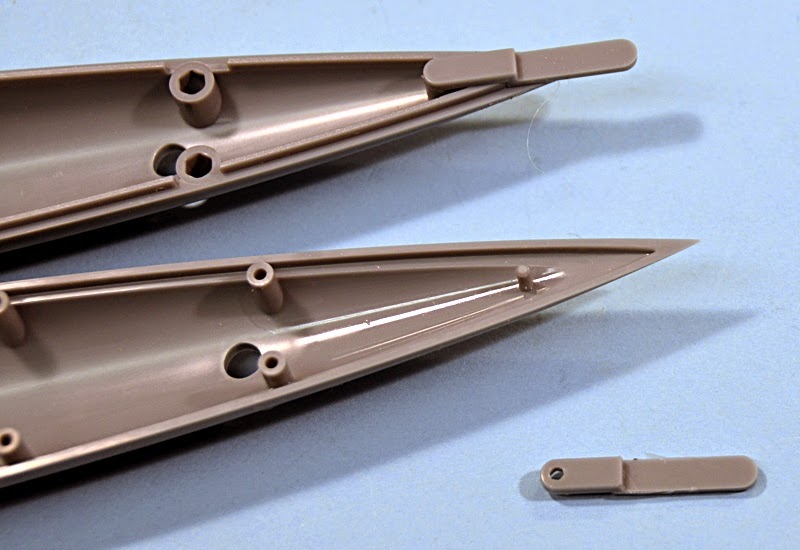 Attaching the fins (below) doesn’t really need cement, as the hull holds them firmly in place. 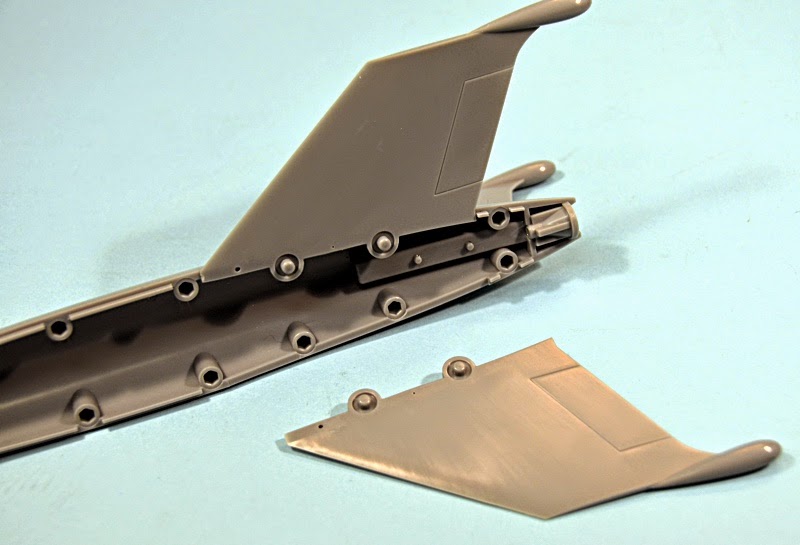 Fitting the portholes in place (below). I tinted them with Tamiya transparent blue. 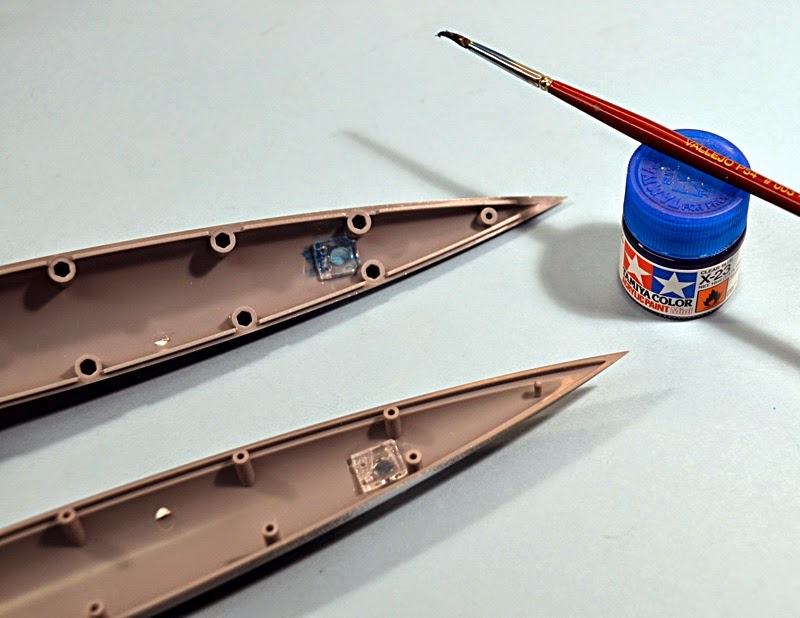 There are chunky locating pips (below) running the whole length of the hull, meaning that if you have an aversion to model cement, snapping the hull halves in place is an option. 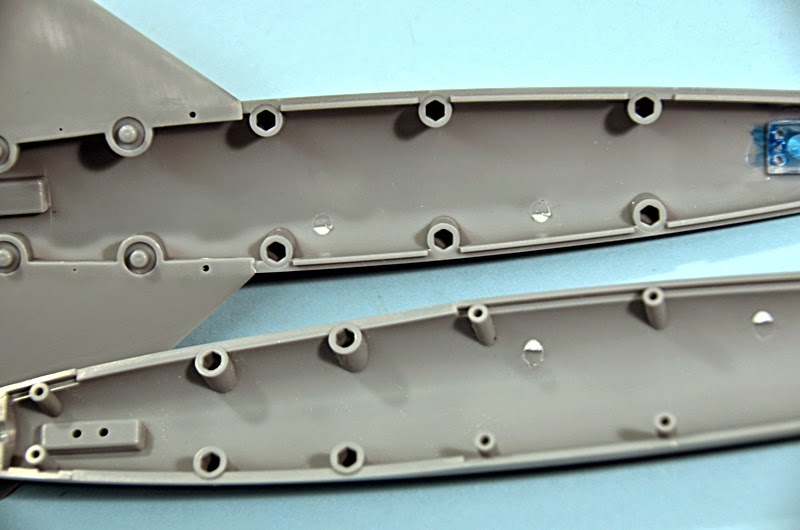 The tail section (below) with the three fins in place. 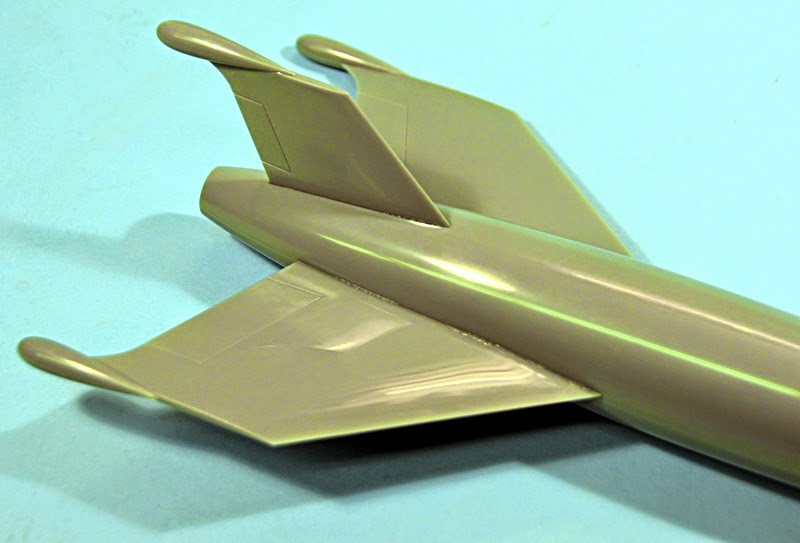 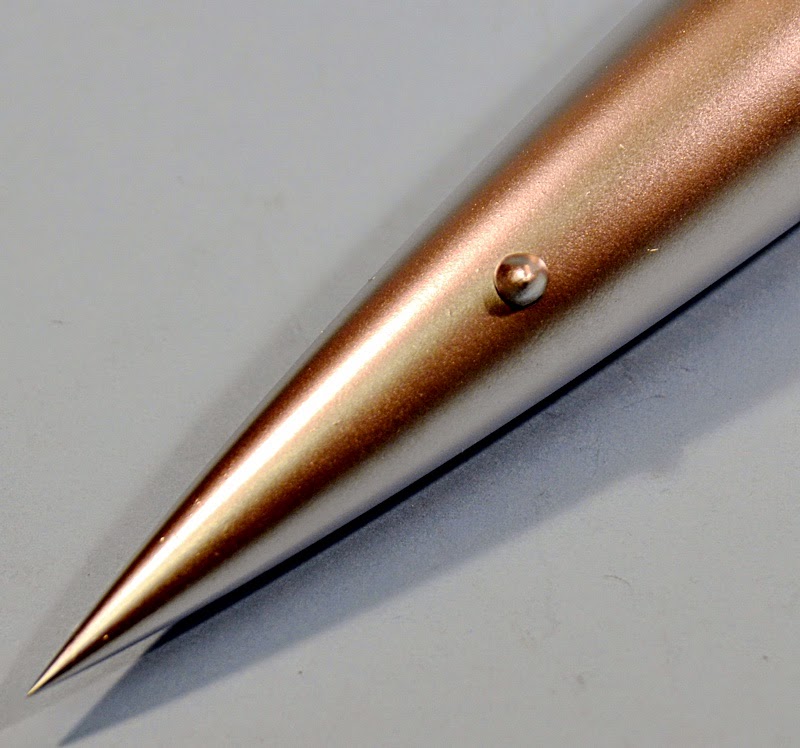 Masking the portholes with Blu-Tack (above) and (below) removing it. 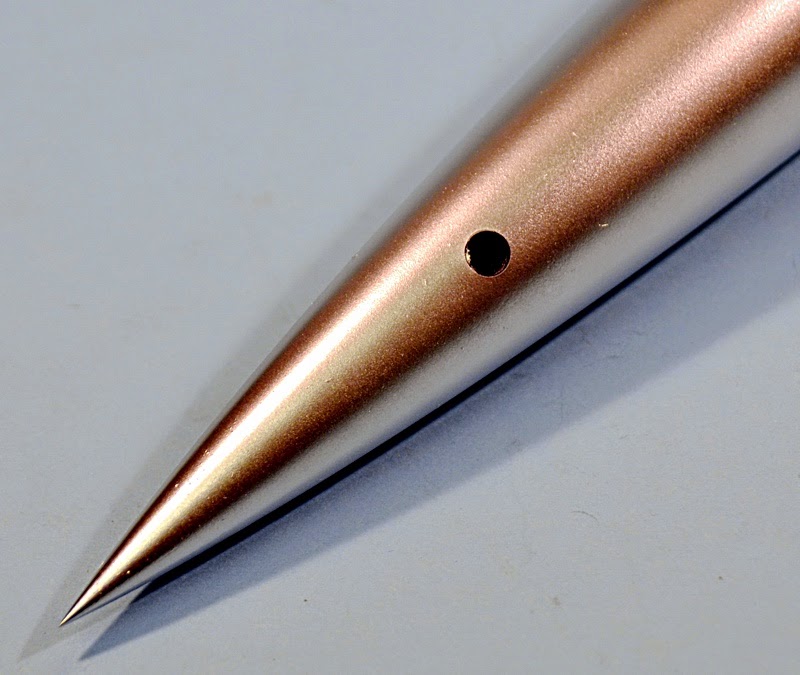 The rocket will just about balance on its three main legs (below) but I wouldn’t like to try and land it safely!

The fourth leg (below) was apparently added by the original designers as an afterthought. 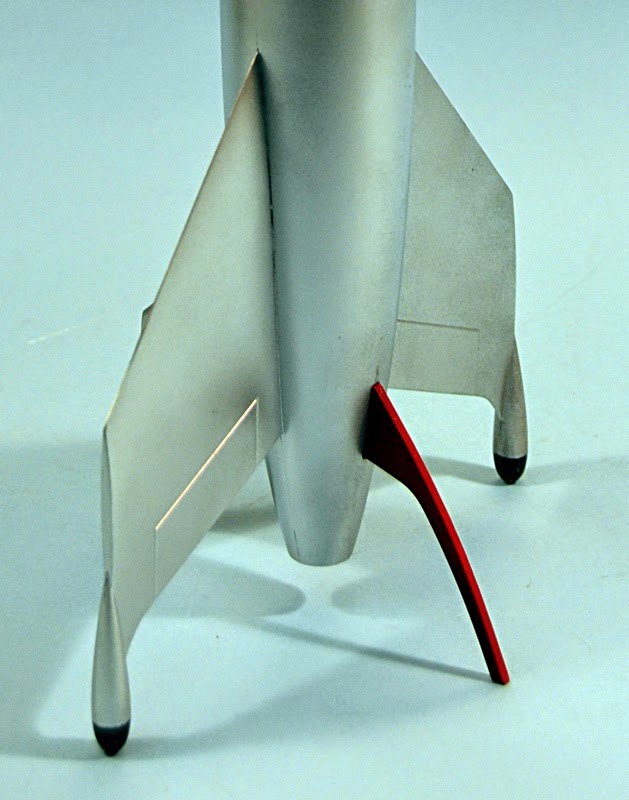 Black tips for the three main landing legs (below). 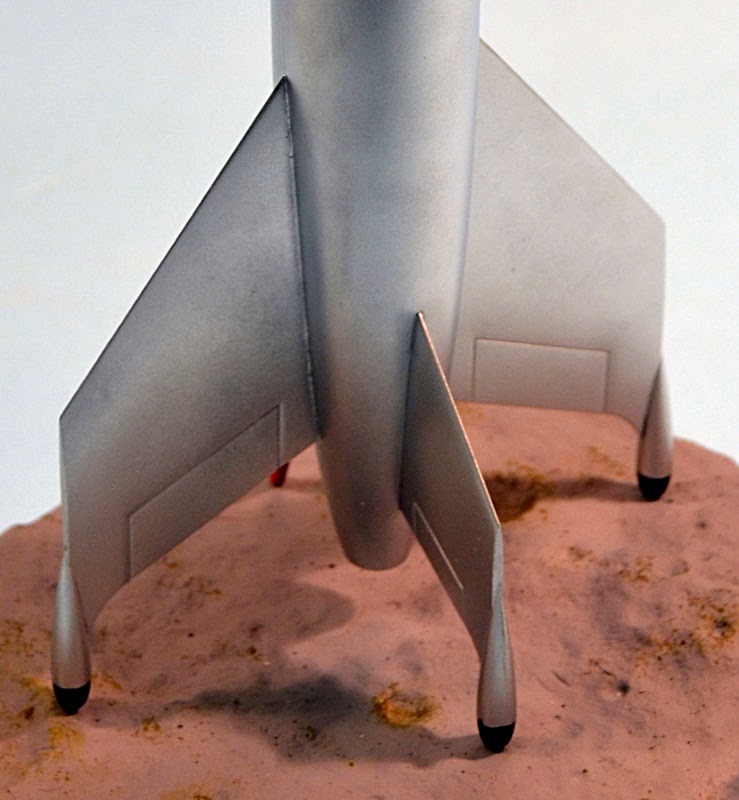 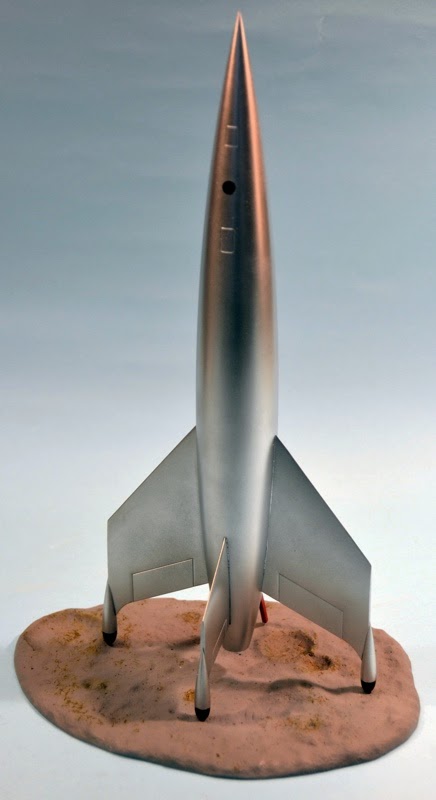 The curved fourth leg (below) kept the Luna stable and erect. The same is true for the Pegasus model. 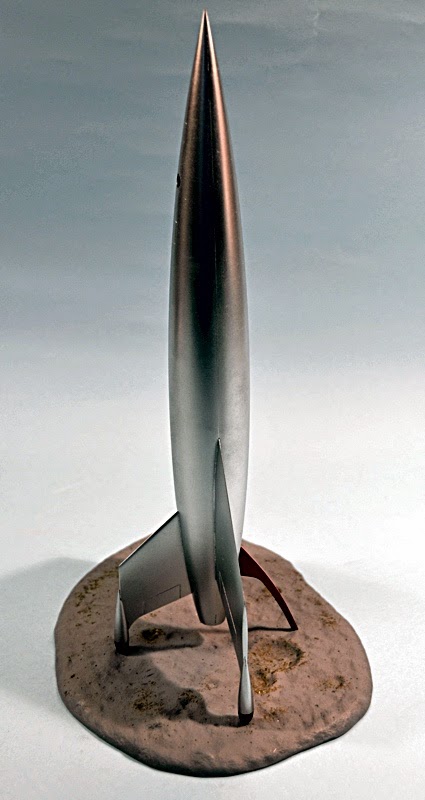 The finished Pegasus model (below) standing on the supplied section of simulated lunar surface. This is actually quite decently done - it's a reasonably convincing piece of lunar regolith, and includes some small craters. 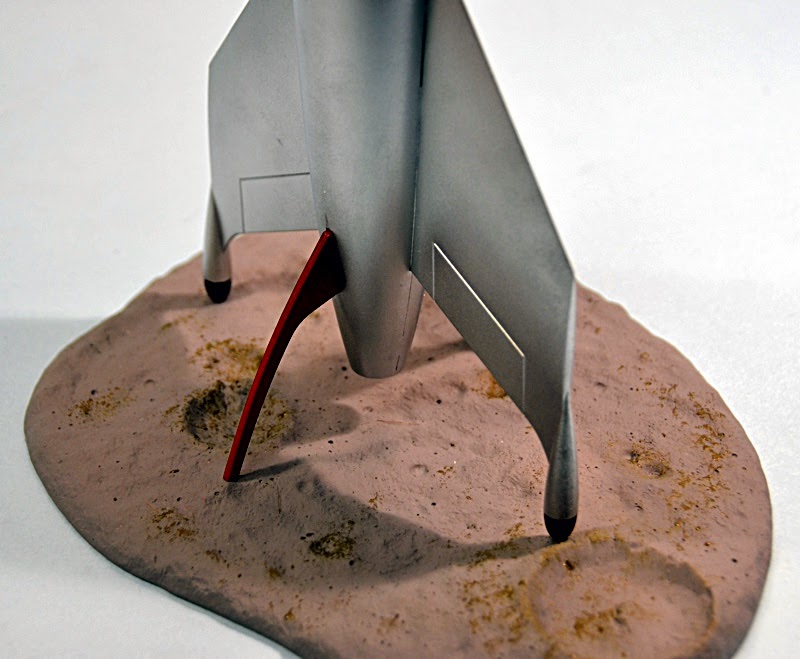 The elegant Luna compared (below) with the more workmanlike Space Shuttle, assembled here from an Airfix kit. Both spacecraft are made to 1:144 scale. 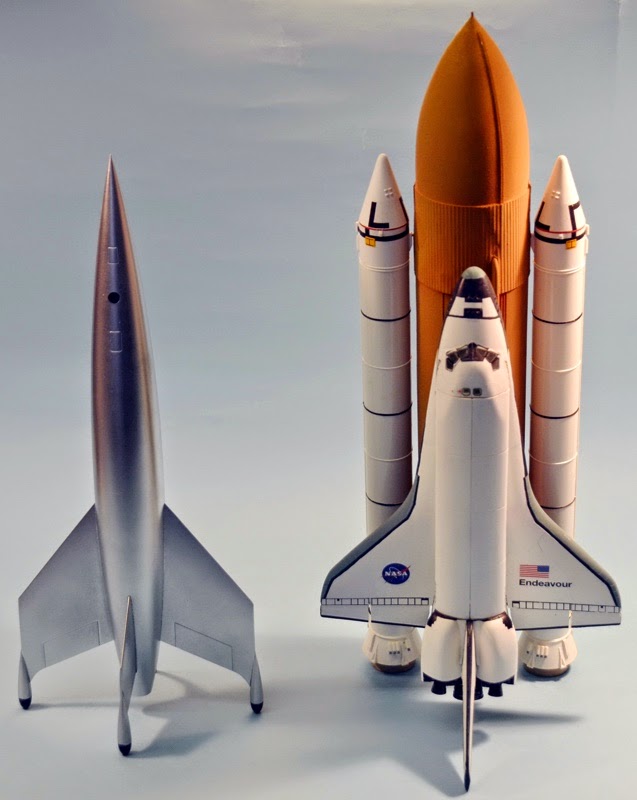 Pegasus also makes a 1:350 scale Luna kit (below) so the choice of scales is yours. 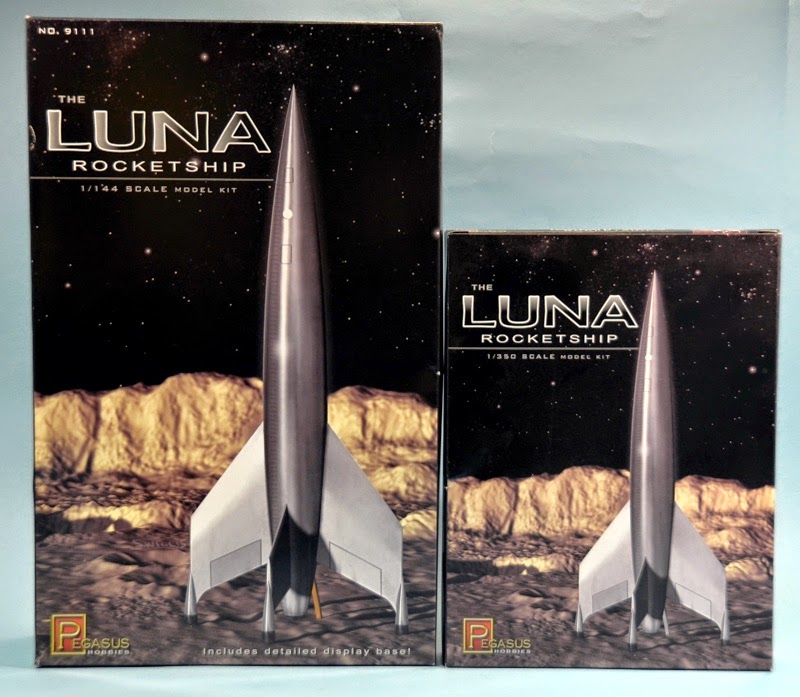 Summation
Luna makes a good addition to the significant SF spaceship kits from Pegasus. If you don’t have display room for it, Pegasus also makes a smaller Luna to 1:350 scale.

SMN note: Since SpaceX is currently using a drone ship as a landing platform for its reusable Falcon 9R launcher, it suggests a thought for the 1:350 scale Luna. The scale is the same as some Airfix ships, including the excellent HMS Illustrious. Hmmm... what about converting the 'Lusty' as a retro-future spaceport for the Royal Space Navy?

SMN comment: The fourth leg really spoils the elegant appearance of the original spacecraft. Why the Destination Moon designers didn’t simply have a triangular or cruciform fin arrangement? Click here for more from SMN.

Thanks to Pegasus Hobbies for the sample kit.