ADIOS TO SHERIFF ROSCO COLTRANE FROM THE DUKES OF HAZZARD 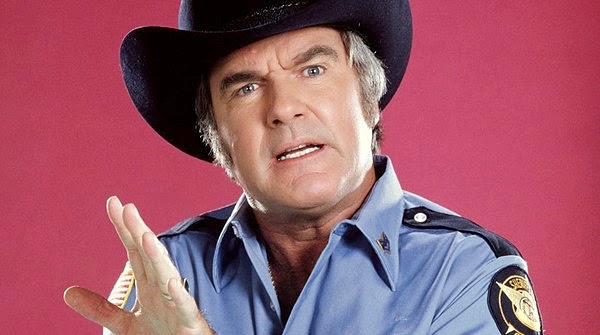 The modelling world lost one of its ‘characters by association’ with the death of American actor James Best on April 6, 2015. The modelling association is that although Best featured in over 40 movies and appeared in nearly 300 episodes of various TV series, it is one of the latter, The Dukes of Hazzard, for which he will almost certainly be best remembered.


Mat Irvine: For The Dukes of Hazzard series, James Best played the hapless Sheriff Rosco P. Coltrane, a role in which his police car seemed to get written off in every episode, each time being driven in pursuit of the Dukes’ hotted up Dodge Charger stock car (below) named The General Lee. 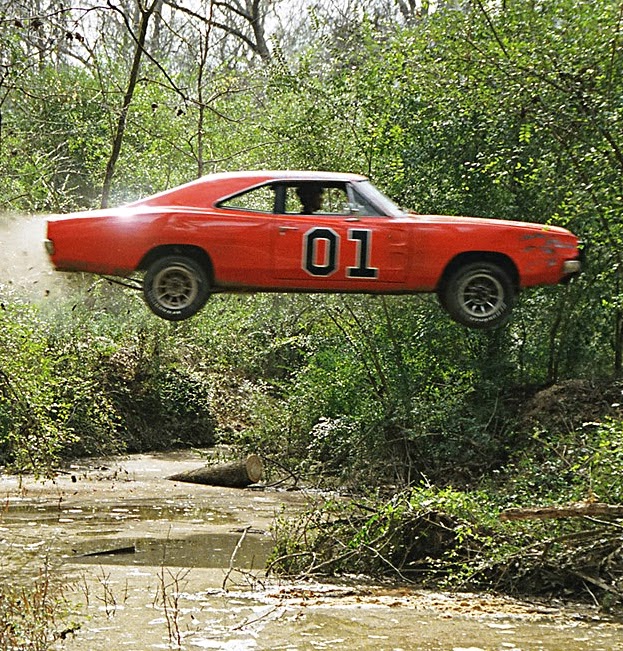 MPC provided us not only with 1:25 scale kits of The General and their lovely cousin Daisy’s Jeep CJ-7 Dixie, but also a generic Dodge Monaco police car as Rosco’s weekly ride.

As with most of the Dukes’ vehicles, the Dodge Monaco has been in and out of the MPC catalogue over the years, but current MPC owner, Round 2, has reissued it in recent years, and the kit is still generally available. The box is almost the same as when first issued in 1982, featuring Rosco and his basset hound police dog, Flash, as part of the box art.

The original box from 1982 (upper pic below) compared with the 2009 issue. Note that although the Rosco and Flash photo shows a similar scene, the pic is actually a somewhat different shot. 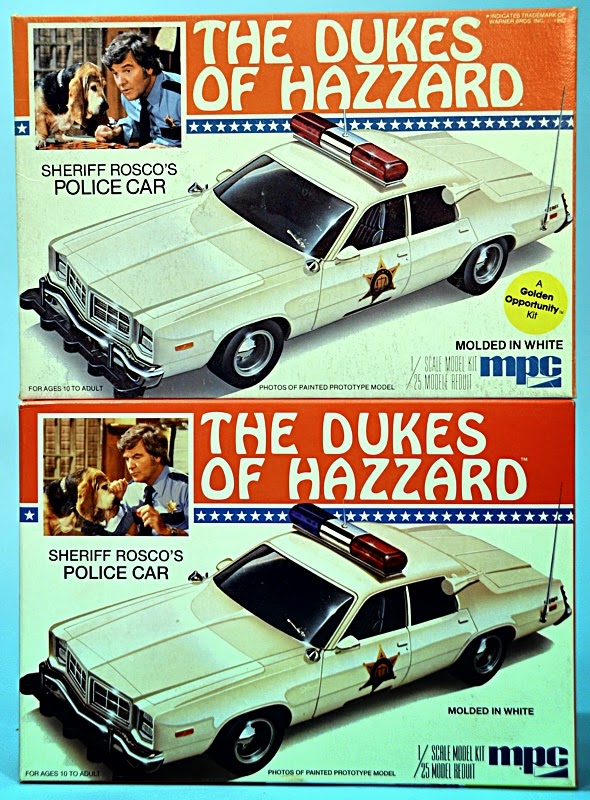 Comparison of the side panels (below). Again, although most imaging - apart from various promotions - is reproduced as the original, Rosco’s pic is different. 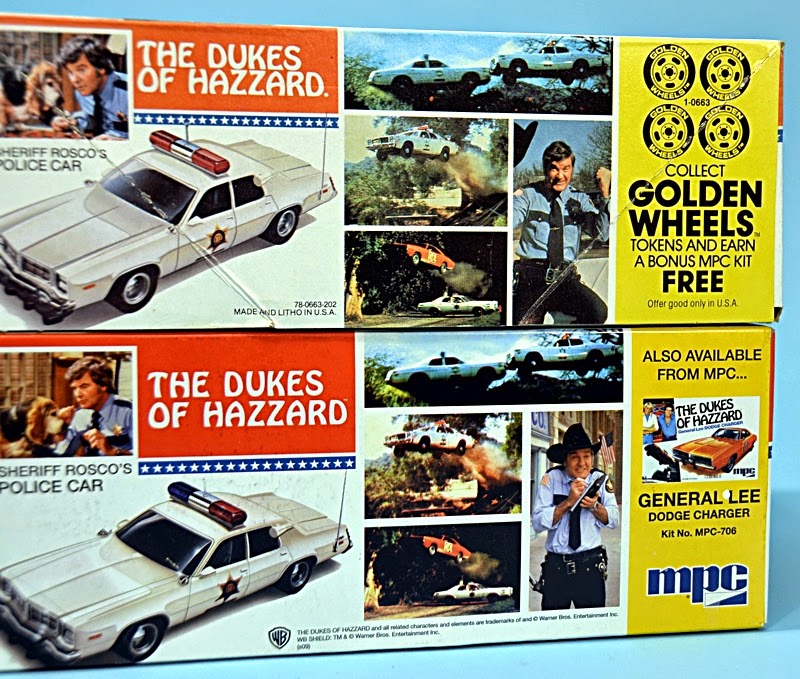 Parts layout (below) of the most recent kit. The components are similar, though you get more on the decal sheet, which now includes correct licence plates for the cars of Rosco and Deputy Enos. 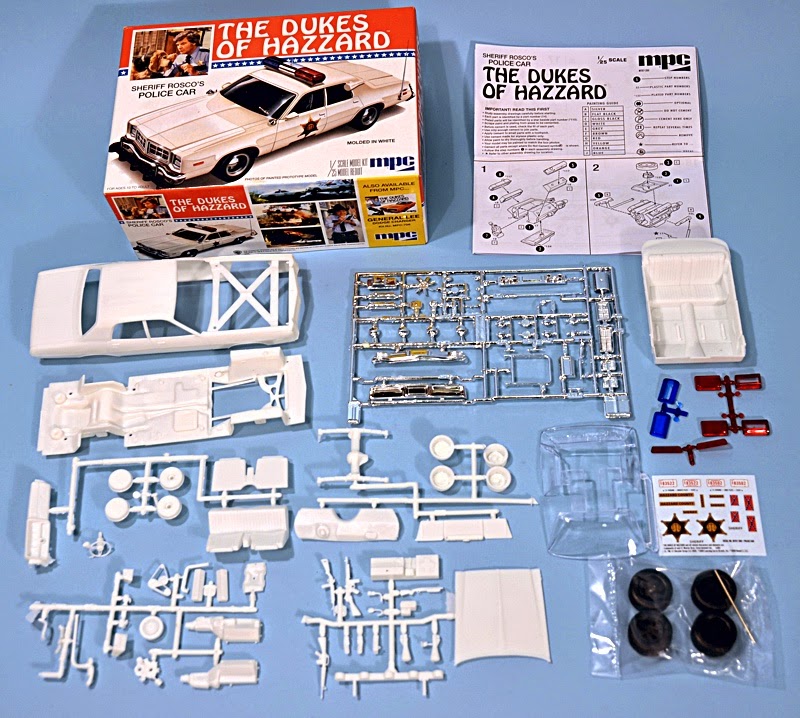 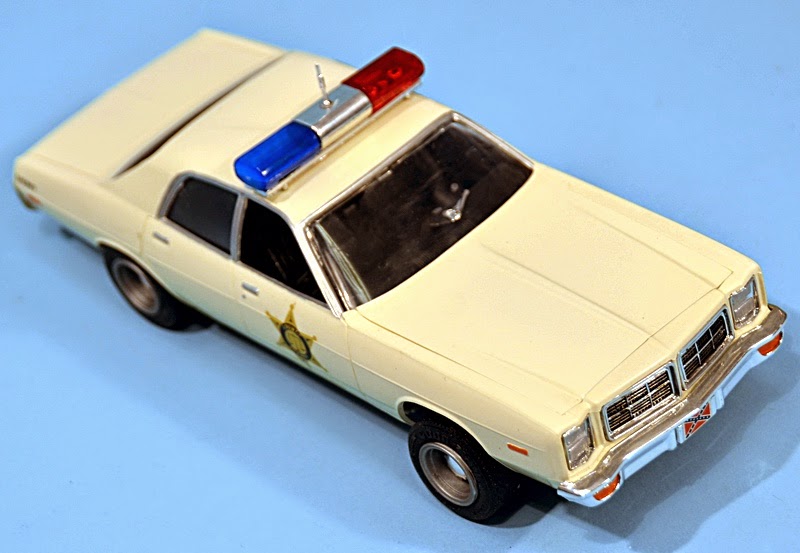 The assembled model (above, below) sits in a somewhat tail-heavy attitude - maybe it’s the weight of all those guns loaded on board. 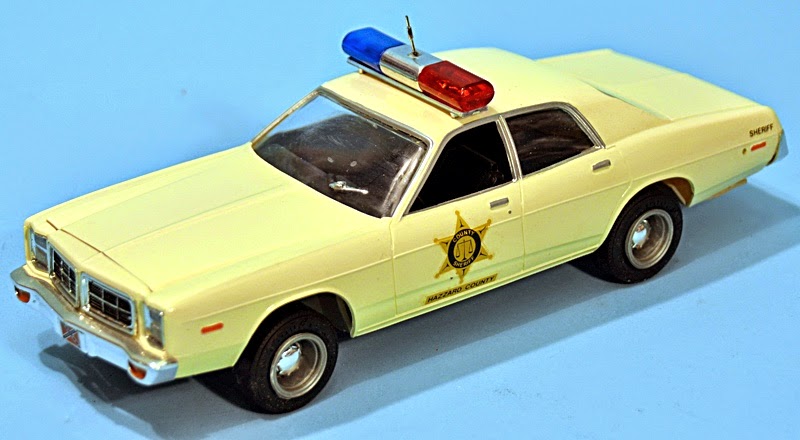 The 1:25 scale MPC Police Car is one of MPC simpler efforts, but none the worse for that. Components come moulded in white plastic, with chrome parts and black vinyl tyres. Light bar illuminations are provided in red and blue translucent plastic. Despite its age, the kit assembles easily, with no great fit or finish issues. The white moulding colour is ideal, not only for this particular subject, but also because it provides a good base for almost any shade you wish to paint.

The kit started out as the stock annual 1978 Dodge Monaco, not as some might think, the Force 440 Police Pursuit Vehicle that was made about the same time. The latter is a two-door, while the annual kit and Rosco’s car are four-door bodies, more usual for police vehicles, anyway. However, the Force 440 came with a bewildering - even for a US police car - range of armament and communications equipment, which got transferred to the Rosco version. However I’m not convinced Rosco knew how to use any of it, especially the guns.

The MPC Force 440 (below) is a two-door, whereas Rosco’s car is the correct four-door. 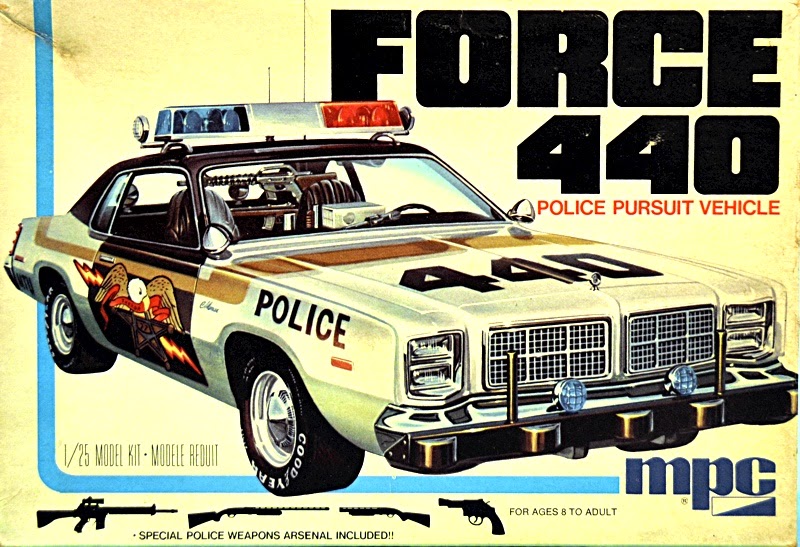 The Force 440’s special police weapons arsenal (below) is included with the Rosco kit. 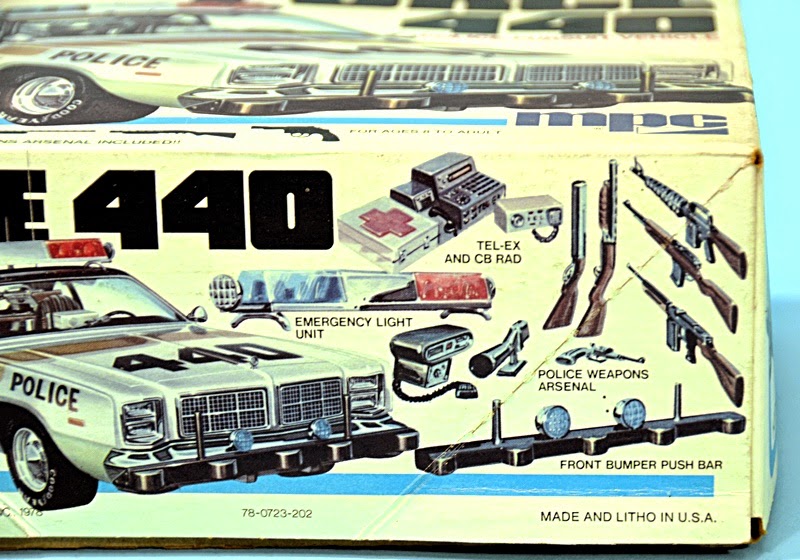 The Police Car version reappeared with additional ‘star’ connections, as the transport for William Shatner’s other on-screen alter-ego, TJ Hooker, and as both a Gotham City Police Car and a Joker Goon Car from Batman.


Cause of all the trouble, The General Lee, seen (below) in mid-jump. Rosco's attempt at pulling off the same stunt would doubtless end in the river. 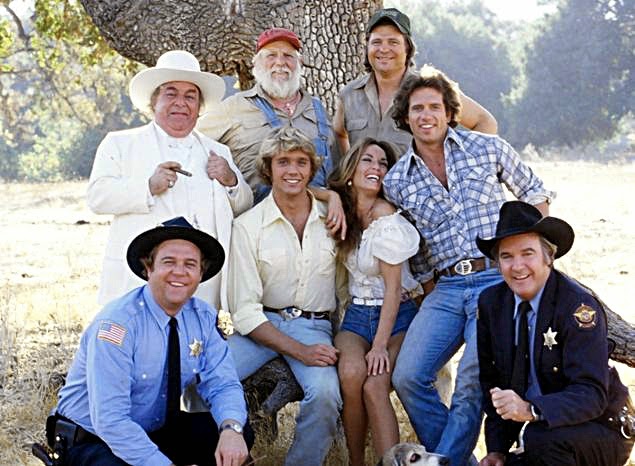 James Best also has a science fiction connection, as he was an uncredited crew member of the saucer-shaped star cruiser C-57D that featured in the 1956 classic Forbidden Planet. In this cinema still (below) Best is probably the crewman standing on the extreme right. 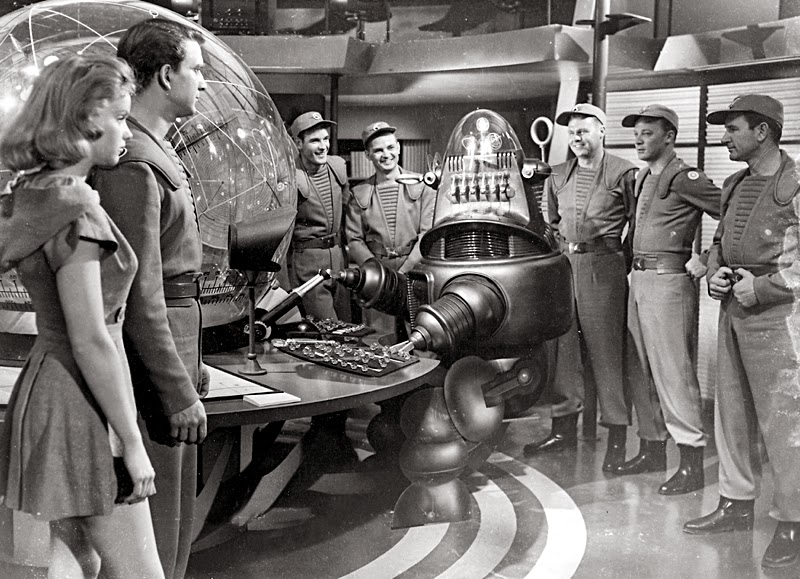 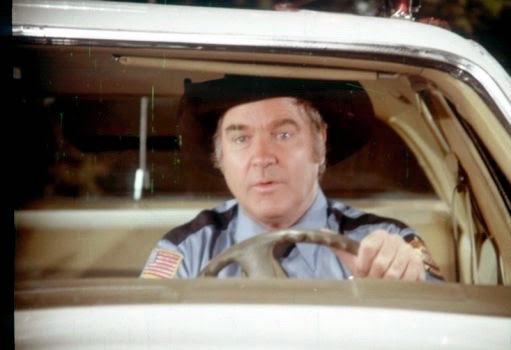 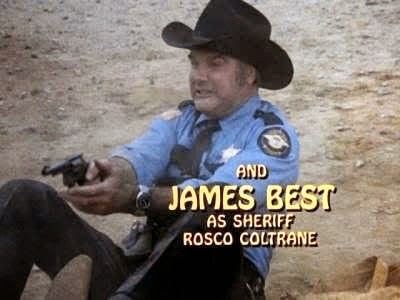