EARTH vs THE FLYING SAUCERS: WE COME IN PEACE - NOT! 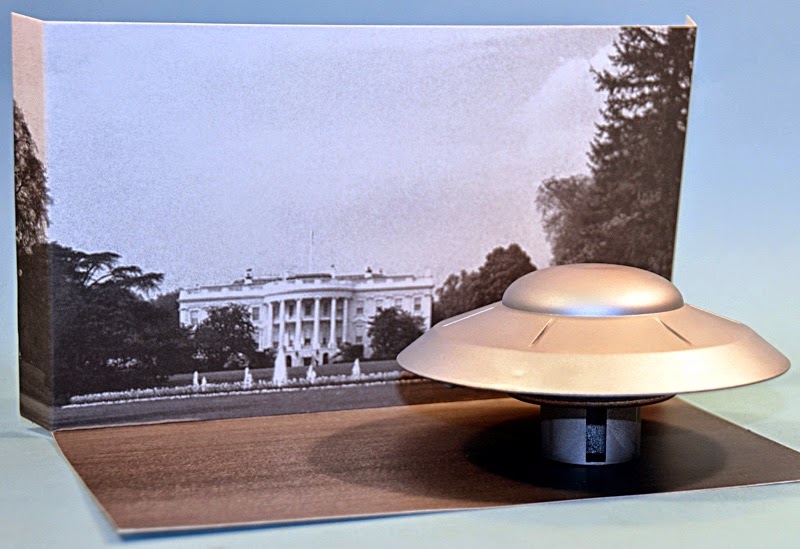 Atlantis Models seems to be vying for the title of ‘model company making the most saucers’, with this latest UFO addition, the Attack Saucer from the 1956 movie Earth vs. The Flying Saucers.


Mat Irvine: This is a very simple kit, with a saucer that consists of upper and lower halves, plus a separate ray projector and central landing pylon. A small stand is also supplied to display the craft in flight mode, and a card diorama backer of the White House is included. This is to show off the finished model in a touchdown scenario. 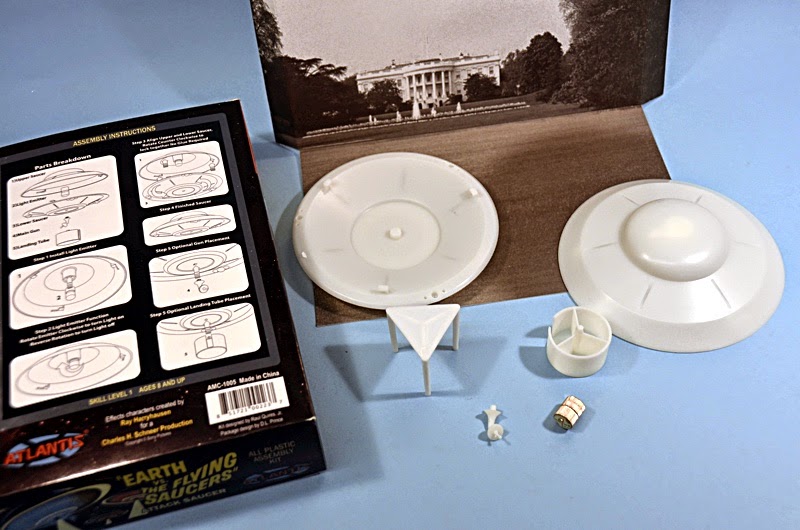 Although simple in construction, the saucer can be built in two ways and includes a self-contained LED to give an unearthly red glow. Either option consists of locking the upper and lower halves together - they don’t have to be cemented - so that you can access the LED that fits inside the upper section. The lower section has a central recess where either the flight mode projection ray can be pushed in place, or the pylon fitted for landing mode.

Closeup of small parts (below) shows the projection ray and LED. 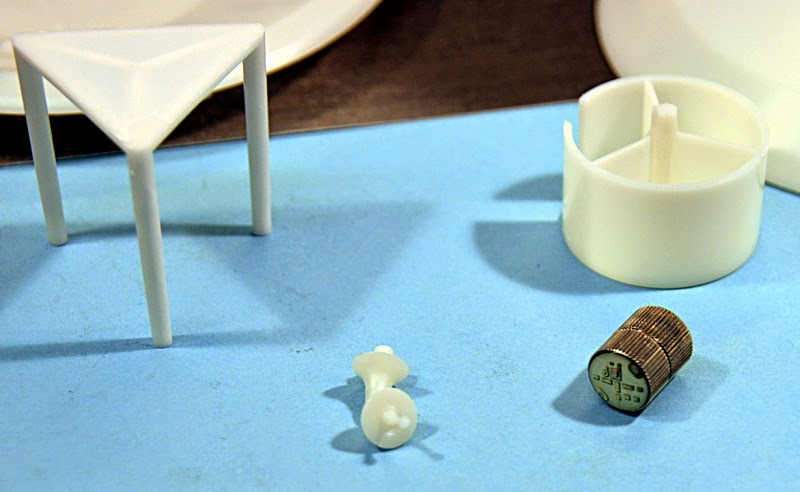 The 1956 movie was made in black and white, so the colours of the saucer are described as plain ‘silver’ though I made some variations in the shades. The main saucer was painted Testors Aluminum Plate, the pylon sprayed a darker metallic shade, and the projection ray in Humbrol Chrome Silver. The lower hull was first sprayed with Testors Transparent Red, then misted over with the aluminium. This aids the red LED effect, though frankly it’s only really apparent in a very dark room!

The upper and lower saucer halves (below) the lower having been tinted with Testors Transparent Red.

The competed saucer on the supplied base (below) which allows the projection ray to be fitted. 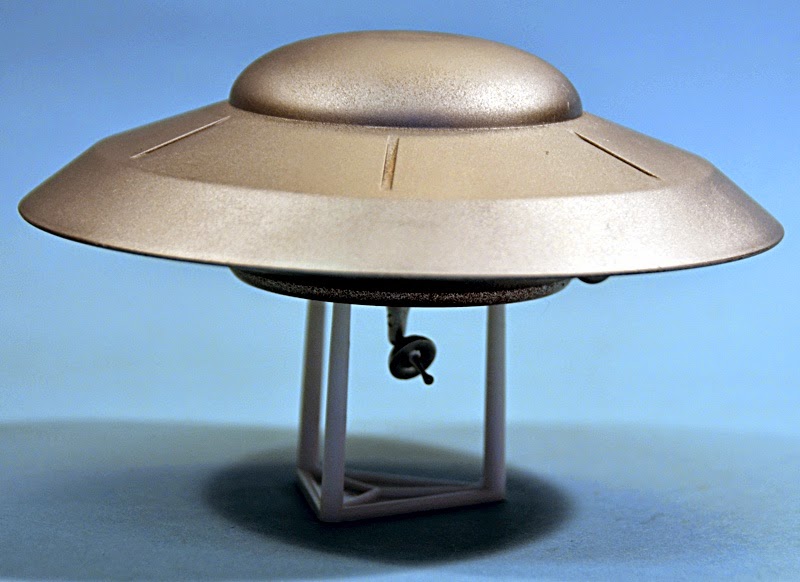 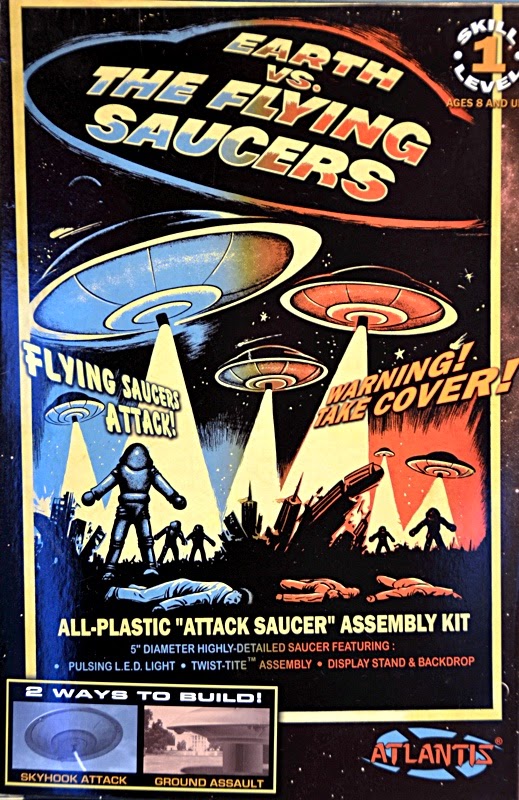 The box top (above) mimics the movie poster, while the bottom (below) features straightforward assembly instructions. 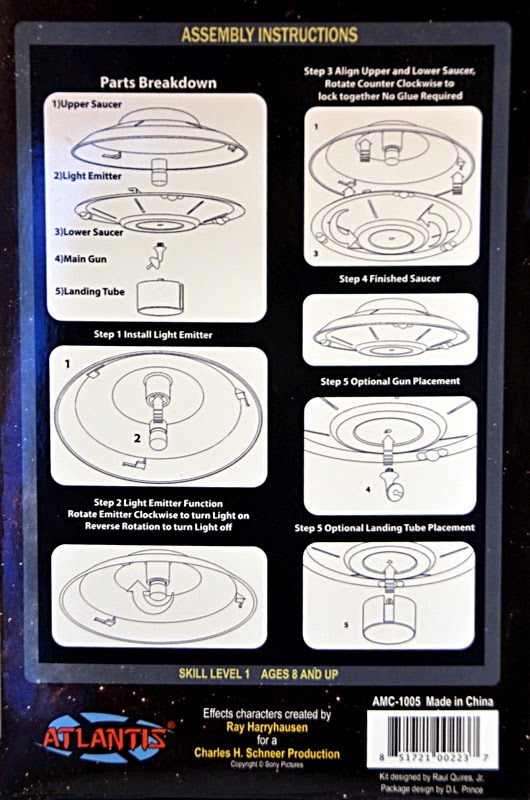 Earth vs The Flying Saucers was similar to other 1950s science fiction movies, many of them slated as not being very good or lumped together as B-movies. This was when cinemagoers went for a main feature, the A-movie, the evening's entertainment also including a shorter and cheaper one to see first, the B-movie. But in many ways this was unfair, as science fiction films such as Forbidden Planet, This Island Earth and The Day The Earth Stood Still were definitely A-listers, two even being in colour. Earth vs The Flying Saucers probably doesn’t make that banner, though isn’t perhaps as bad as it sounds, especially as animation guru Ray Harryhausen was on the production team.

The assembled saucer in landing mode (below) seen here in a suitable setting. 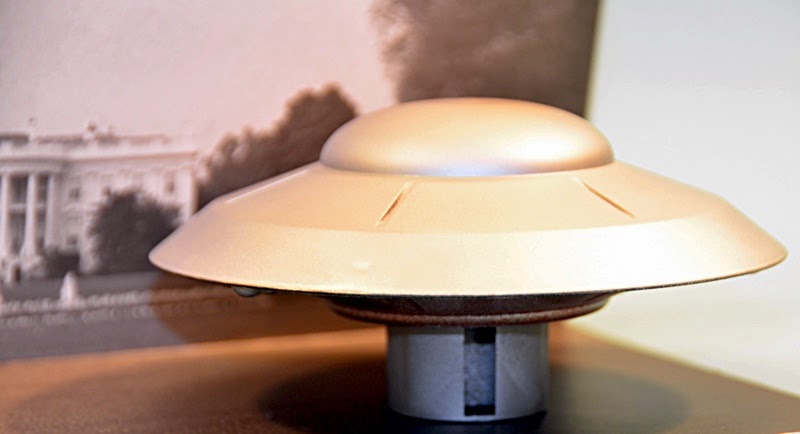 There have been a few models of this saucer before, but all have been limited-edition kits, usually moulded in resin. One even features a saucer crashing into the Washington Monument, but this is the first kit in injection styrene.

There’s more on the movie in the excellent book The Saucer Fleet by Jack Hagerty and Jon C. Rodgers (below). The book is presently out of print (I think I got the last copy) but is still available from Amazon (see bottom). It’s well worth the money. 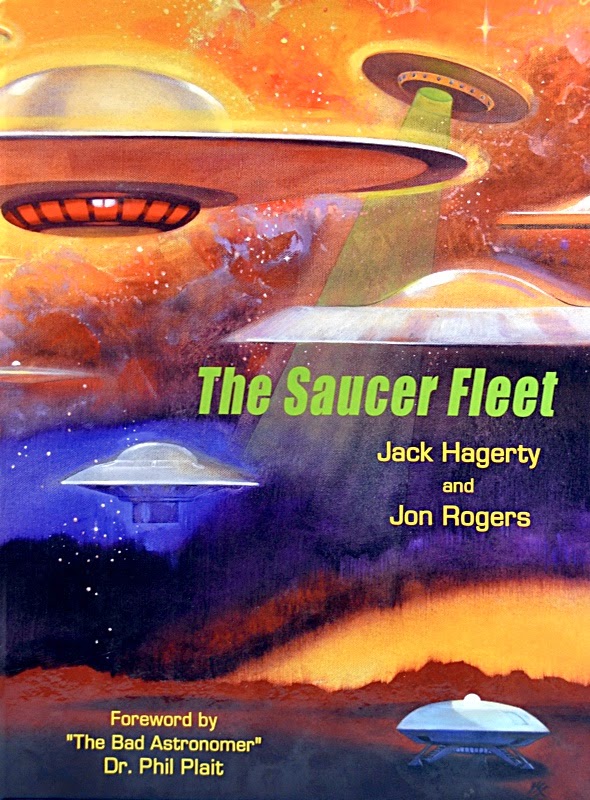 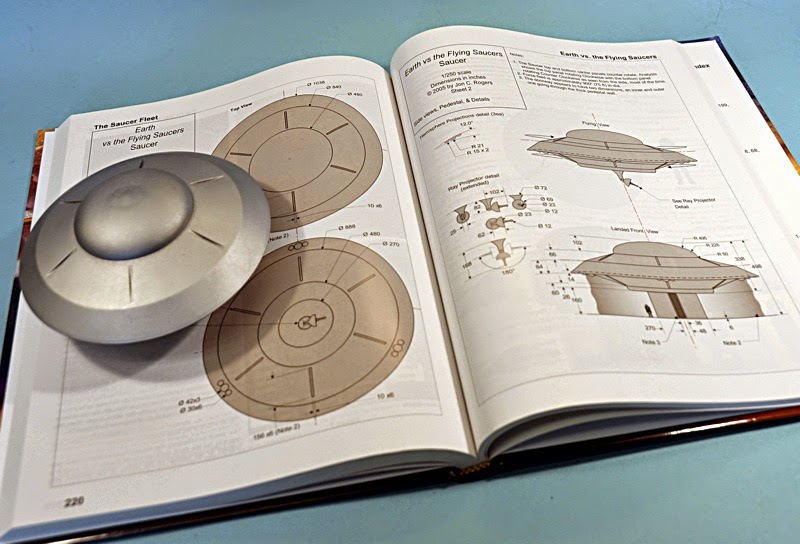 The assembled saucer (above, below) seen against two spreads from the book. 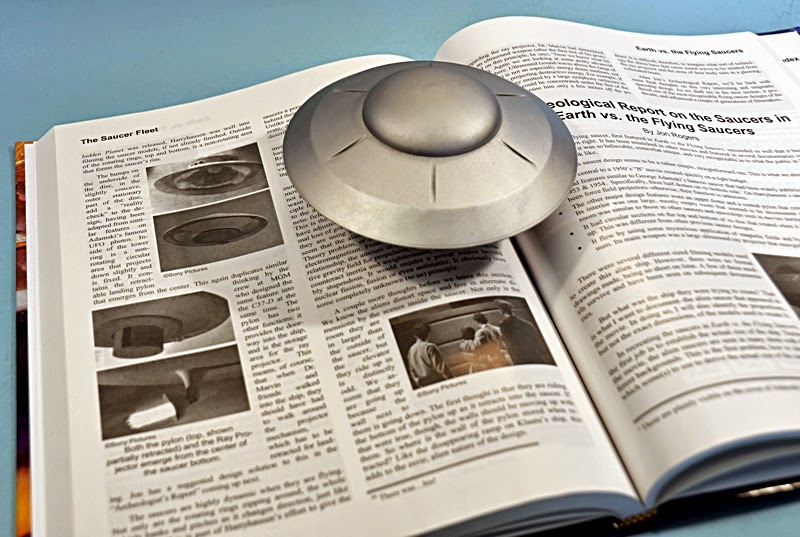 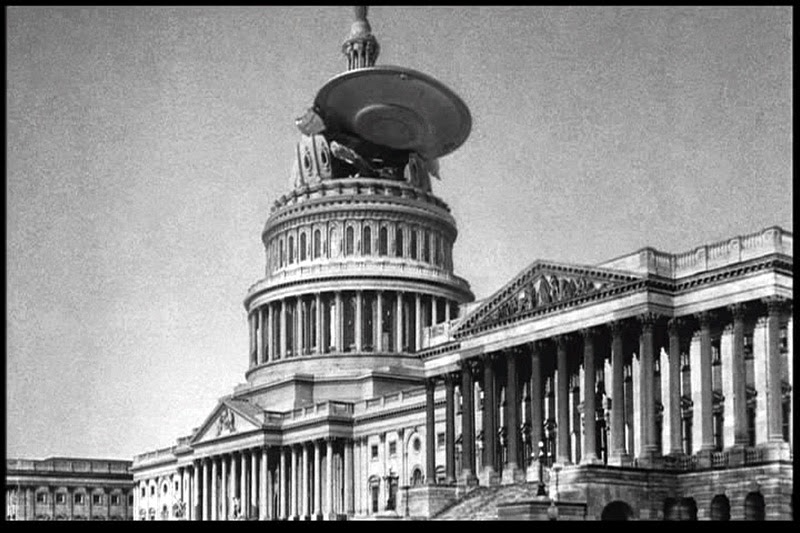 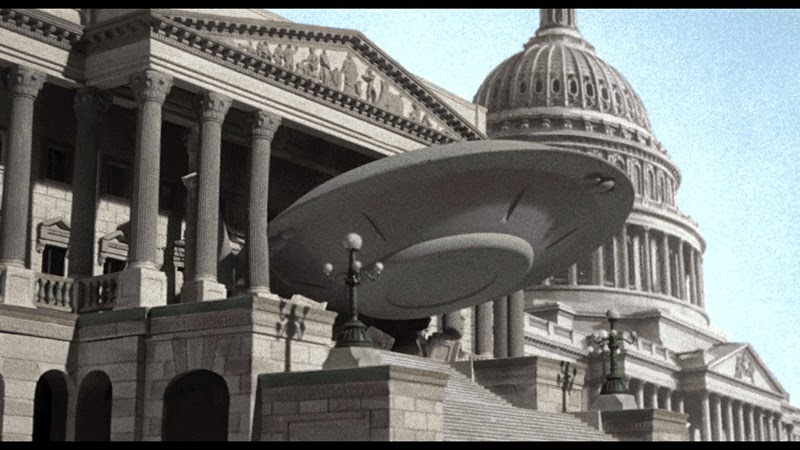 The movie's crash scenes we show here are especially interesting, as Glencoe Models has reissued the old Marx kit of both the Capitol and the White House. With these, you could present a diorama with more than just the card backer supplied in the Atlantis kit. Note that the pic (above) has been colorized - the movie was in black and white. 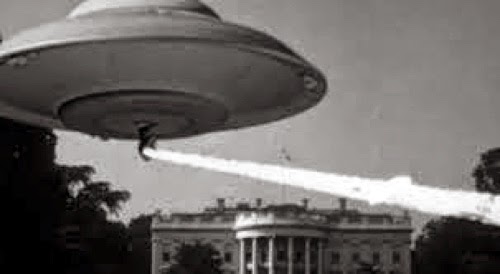 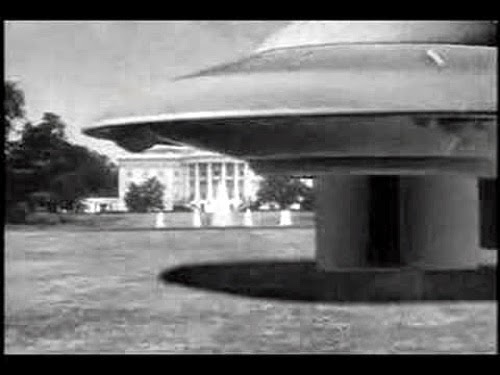 Oops - the Washington Monument (below) gets whacked by a space visitor. 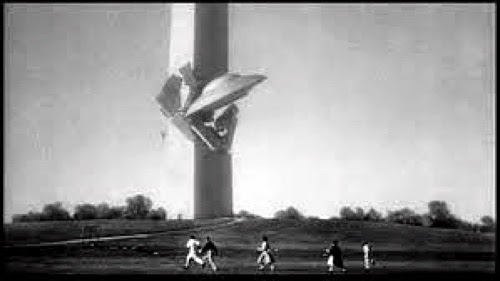 Thanks to Atlantis Models for the kit and to Jack Hagerty for digging out that ‘last copy.’