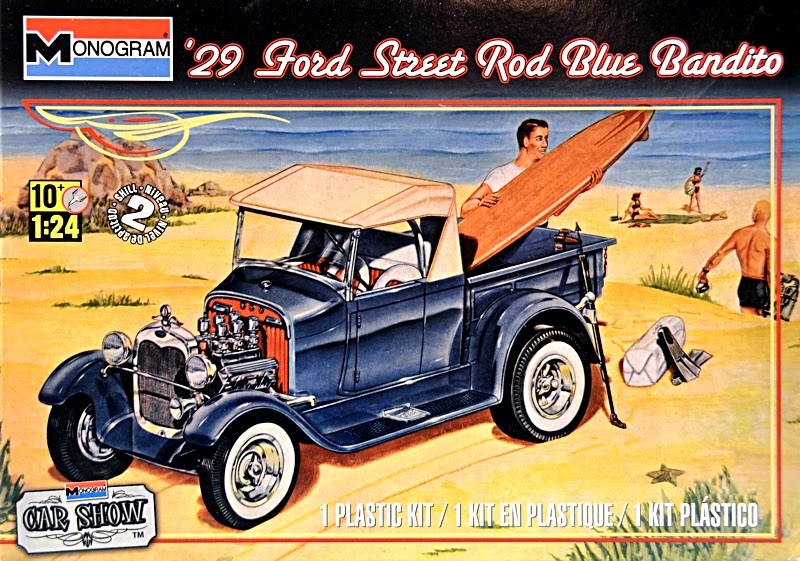 THIS IS ONE OF Monogram’s classic 1:24 scale Hot Rod kits, originally released in 1964 as the Blue Beetle, but now renamed the ’29 Ford Street Rod Blue Bandito.


Mat Irvine: The original Blue Beetle kit represented a custom car, based a 1929 Ford Model A pickup, fitted with a V8 engine, mag wheels and modern tyres. Included in the kit were a surfboard and scuba gear - tanks, flippers, weight-belt and goggles. 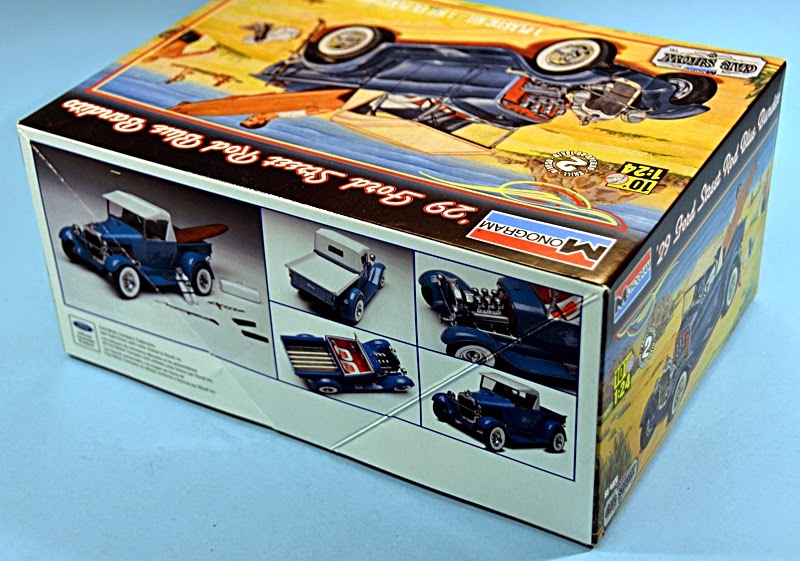 Now the Blue Beetle is back from Revell-Monogram, still under the Monogram banner (though the instructions include the Revell name) but renamed the Blue Bandito. The rest of the kit remains the same as before, and you still get customizing components for an alternative Roadster version, with a choice of wheels, dropped axles, engine mods, and wood-look stakes for the pickup bed.

Parts layout of the new kit (below) shows the 112 components on their runners. 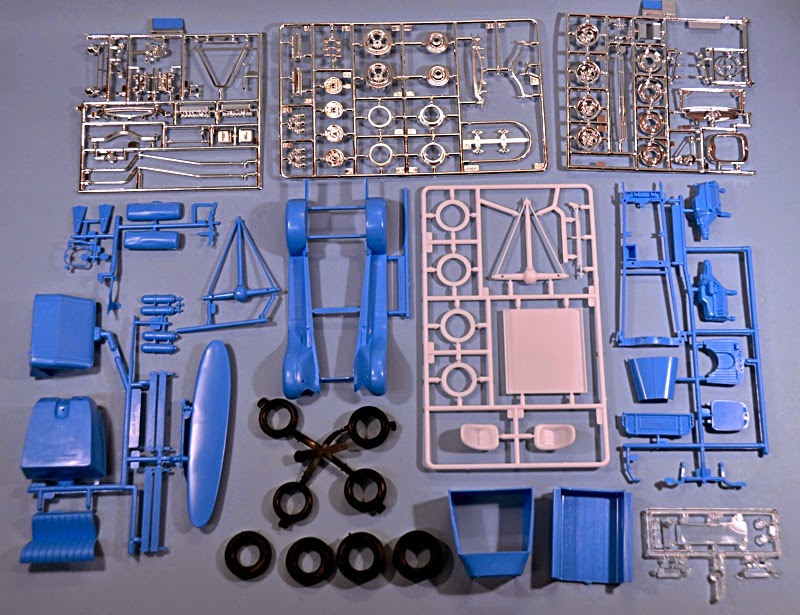 The Blue Beetle has been reissued once before though the basic kit was also released as a generic custom 1929 Ford Model A pickup, in a kit that included wooden slats for the pickup sides, but missing anything to do with nautical activities. 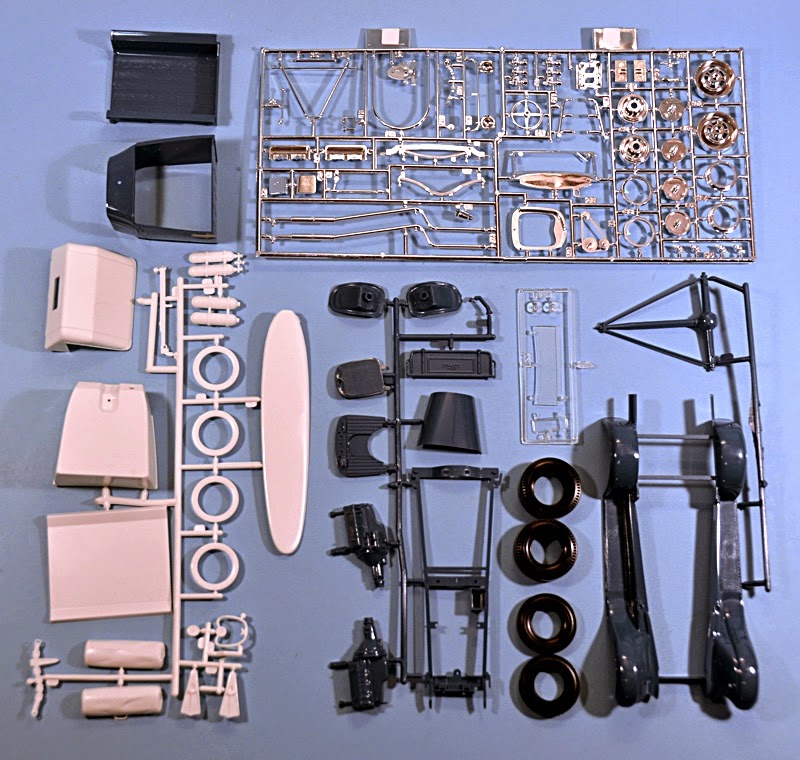 Old decal sheet (below left) next to the far more comprehensive replacement, which comes in the Blue Bandito box. 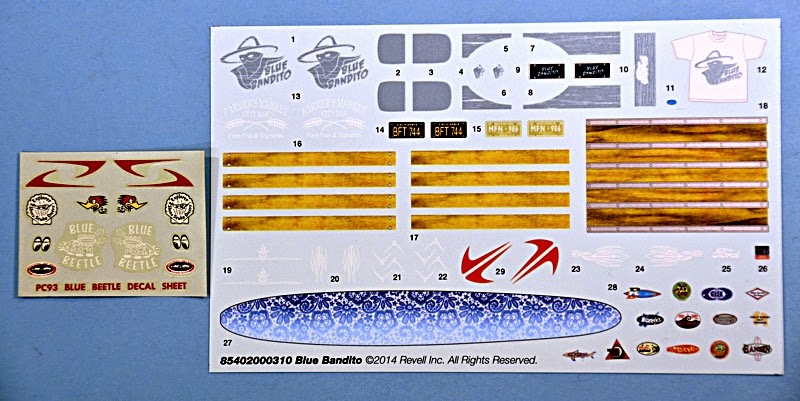 So far as building the Blue Bandito goes, the original Blue Beetle parts breakdown was somewhat simpler than the mouldings for a new-tool kit might offer. For example, the magneto is built in into the engine halves, rather than being a separate component, while the front and rear axles are offered as single items. But the final result (below) is none the worse for that, and being a Monogram kit, the moulding is top-notch, with excellent parts fit.

Five pix (below) show the assembled Blue Bandito. I created a suitable setting, and added surfside figure from the Jimmy Flintstone Studios range. 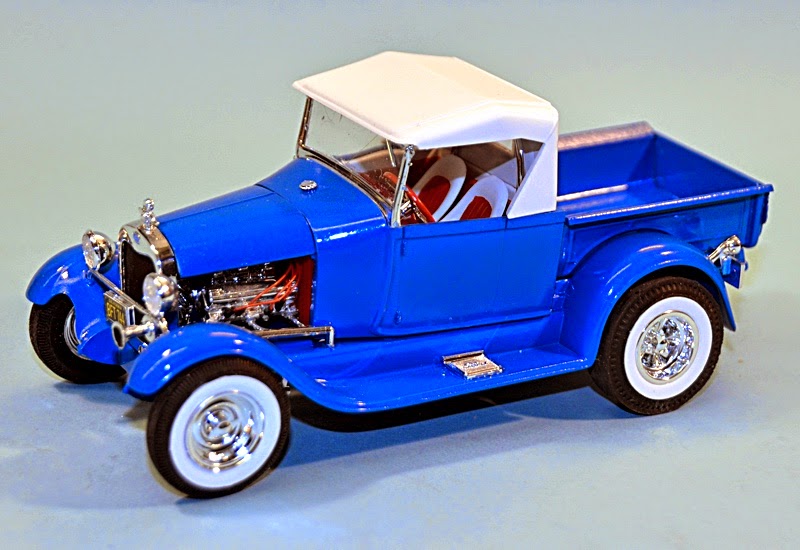 Engine detail (below) good, rewarded by some work with leads and plugs. 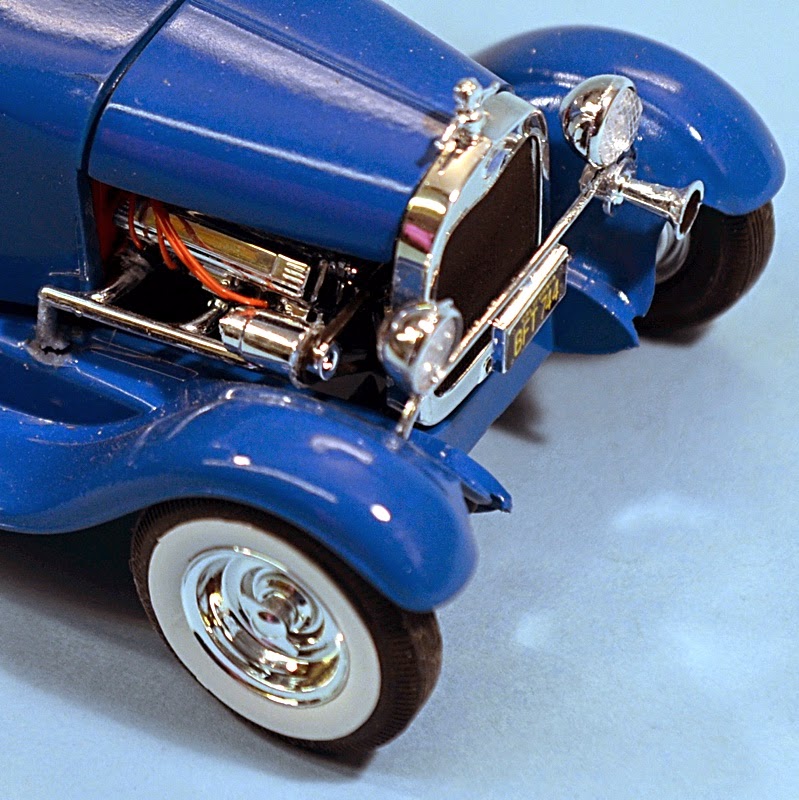 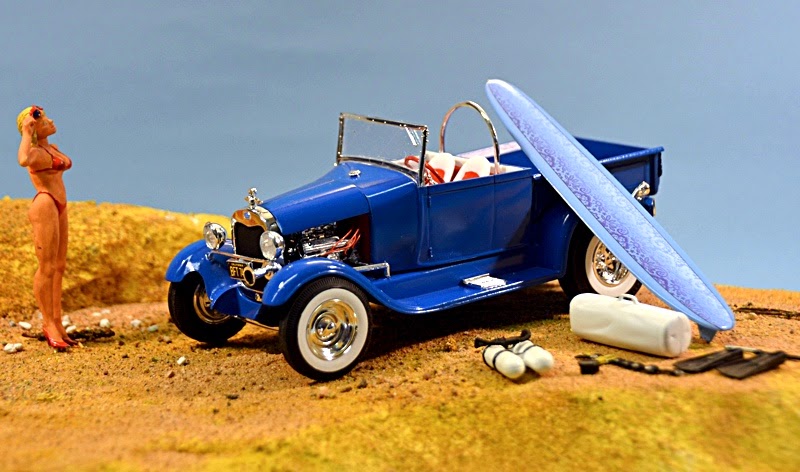 Choice of board colour is up to you, though the supplied decal is fine as is. 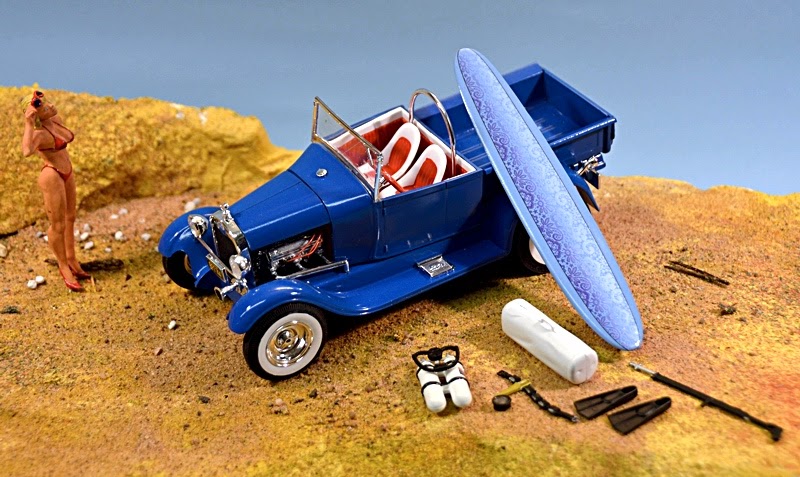 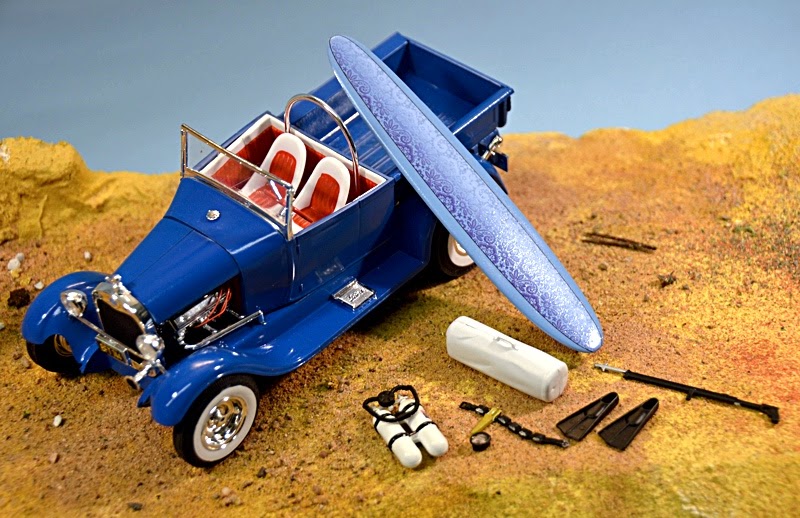 Assembled and painted models (below). Both versions assemble well and look good on display. 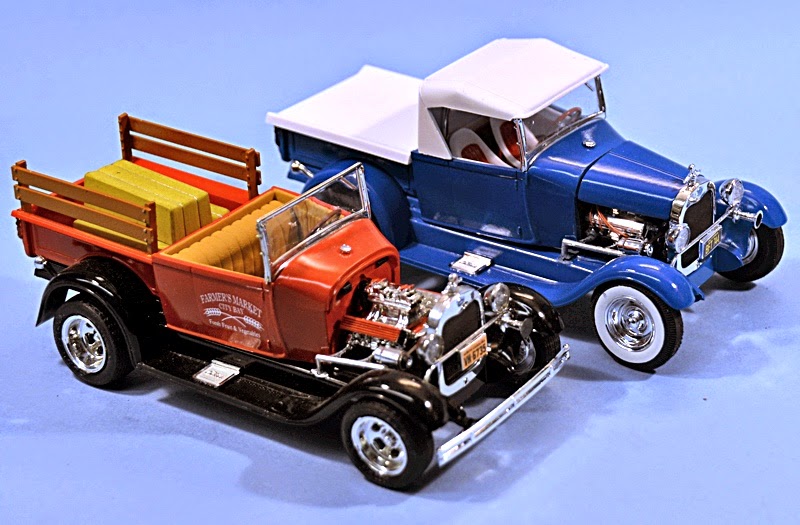 The original Blue Beetle (below front) shown with the Blue Bandito. 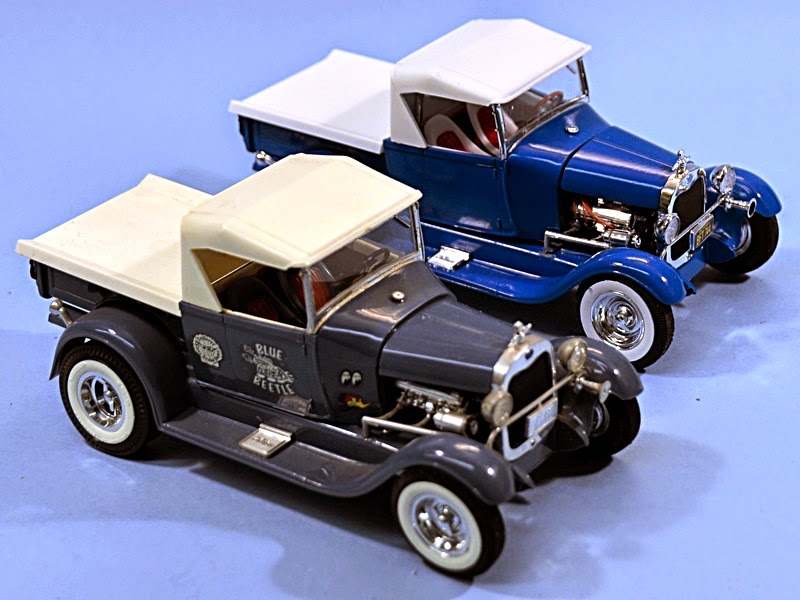 Monogram did a whole series of ‘colour’ cars, here (below front to back) the Blue Beetle, Black Widow, and Green Hornet. The spectrum was expanded later with the Yellow Jacket and Red Chariot, and I suppose you could also add Darryl Starbird’s Orange Hauler to the list. 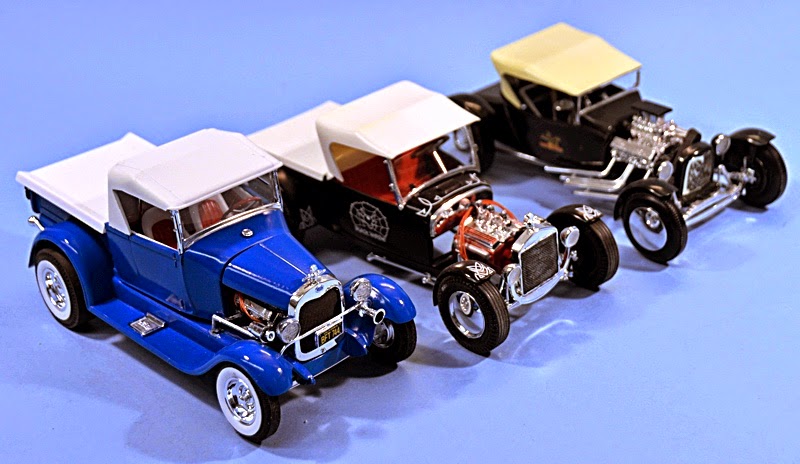 Summation
Another attractive kit that's been resurrected from times past. Goes together well and looks good when assembled. A great kit for all beach bums, especially with added glamour, courtesy Jimmy Flintstone Studios.