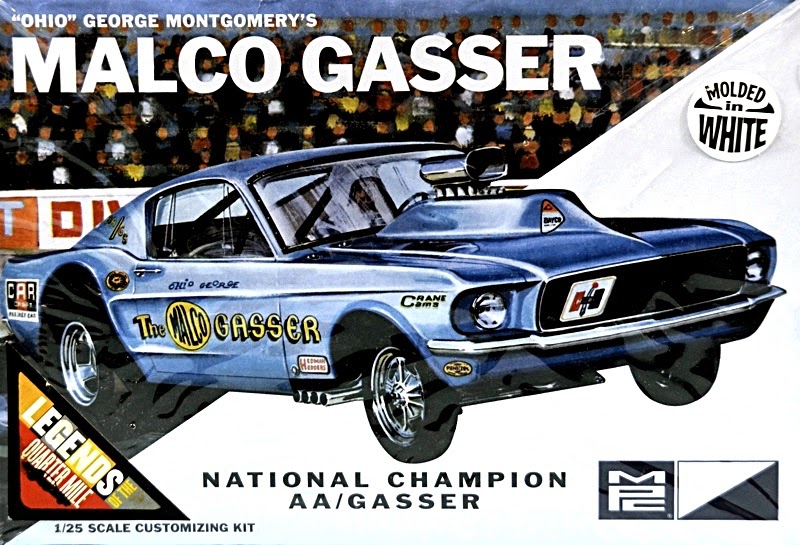 This is an MPC reissue of a 1:25 scale drag racer kit, “Ohio” George Montgomery’s Malco Gasser. The Gasser is based on a 1969 Mustang, but the body shape is where the resemblance ends, as everything else is pure dragster.

Mat Irvine: As with many AMT and MPC kits now being reissued by Round 2, a number of parts are new included either in separate tooling, or newly made. In this case modified or new components include the hood, wheelie bar, bumper and grille filler section. There are also new decals, and new tyres, including drag slicks that are also available as an AMT Parts Pack. 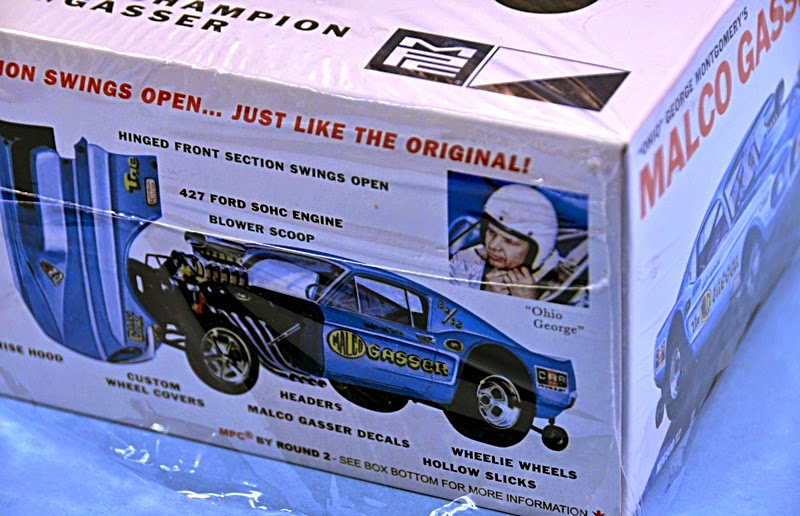 Model assembly is basically straightforward, though there are a few things to watch. The Ford SOHC V8 engine can be built up to start with, wiring the plug leads and adding other details if you want. The running gear is added to the underside of the chassis pan, while the two seats (the passenger seat is somewhat redundant, but has to be in the real thing for official regulation purposes) and the roll cage. A bit of fiddling is necessary to get the cage and seat harness to fit properly, but they eventually get there.

Component layout (below) shows the white-moulded body parts, an excellent base colour for overpainting a finished scheme. 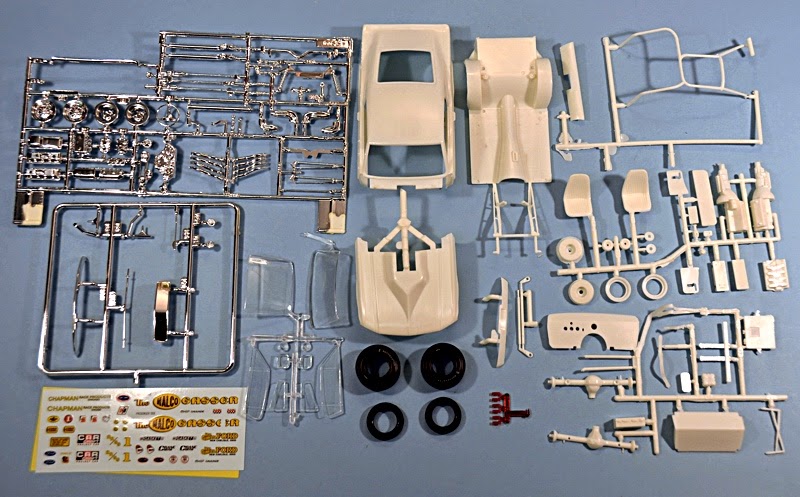 New or modified parts (below) include the hood, chrome parts, decal sheet and tyres. 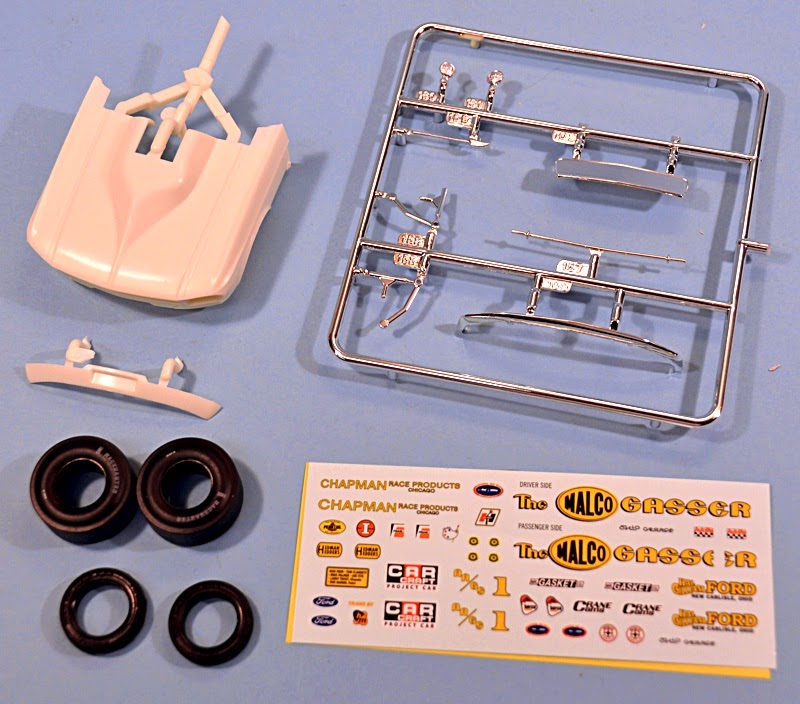 The bodywork features a flip-front hood, with new filler-piece. The assembly instructions are a bit vague about how the parachute frame fits at the back. They ‘sort of’ indicate that it fits to the chassis; in fact, the frame fits over the main bodywork and bumper.

There are some problems with what to do about the car’s markings and finish. Although it’s easy to say the car is ‘blue’, even ‘metallic blue’, virtually any photos of the car show it wearing different markings. This is primarily as cars like this may only race in a single scheme (including sponsor decals) for a day, perhaps even one race. 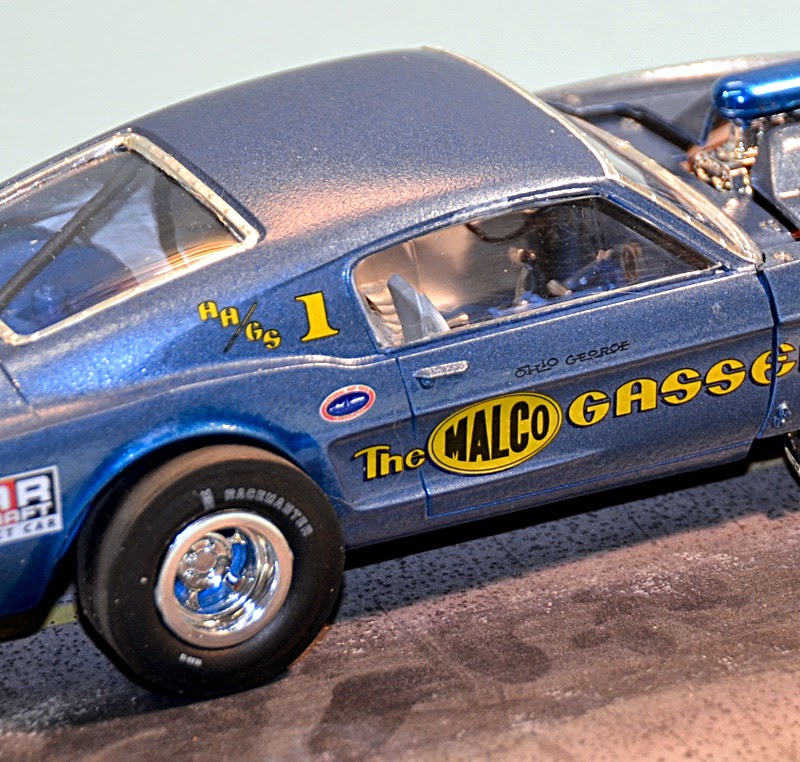 The kit supplies separate headlamps (they would be dummy, but they are there) but some photos show them covered over. Other pix show the grille-filler in various shades. The blower scoop can be chrome, or tinted blue. So really, you have to pick your preferred ‘finish of the moment’ and stick with it.

The completed model on a suitable base (below) with flip hood opened up. Note that I wired the engine with plug leads to give a realistic effect. 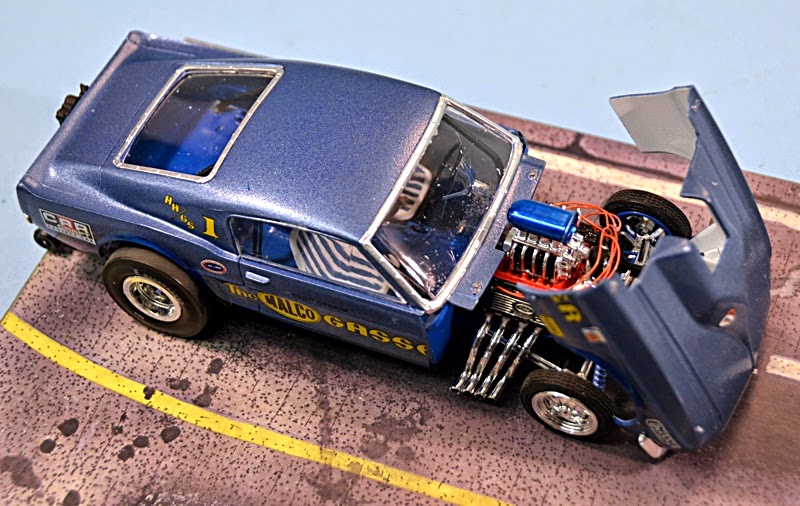 Incidentally, George Montgomery also owns the Little Eliminator Ford Ranchero service truck that was reviewed as an AMT kit a while ago. Displaying the two cars together would make for a good diorama possibility.

George's Gasser and Little Eliminator, seen (below) on a custom-made road bed.

Apart from the relatively minor assembly issues, the Malco Gasser makes into decent display model, and one that should be in the collection for anyone who likes hot rods, the dragstrip, or the Ford Mustang.