WHEN IS A BOAT NOT A BOAT? WHEN IT’S A REVELL HOT ROD HYDRO! 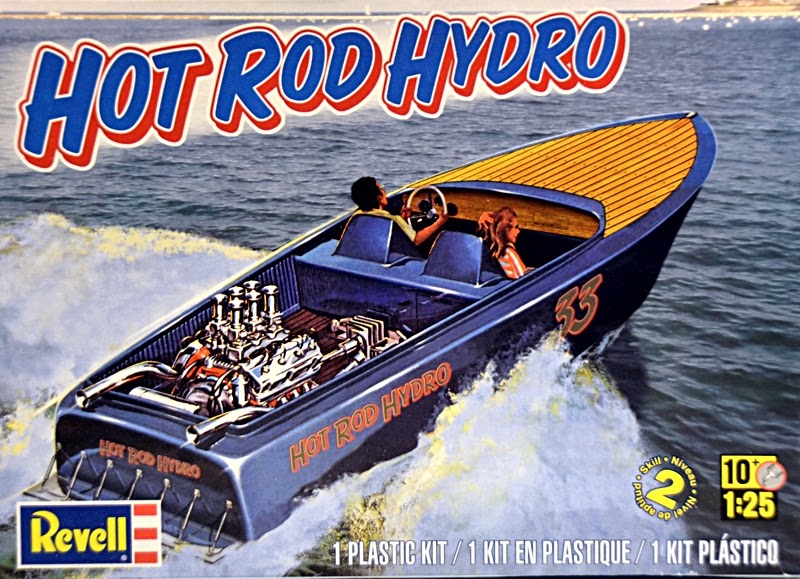 ANOTHER ANSWER TO THE HEADLINE question could be, “When it’s a car.” For this is how model companies have usually treated powerboat kits - as an extension to their model car catalogue.

Mat Irvine: This was primarily as these types of boats were towed on a trailer by a car, truck or pickup. Both AMT and Revell have made powerboat kits, and now the 1:25 scale Hot Rod Hydro kit is reissued as an updated version of the Revell Drag Boat and Hemi-Hydro, first released in the early 1960s. The automotive connection is again emphasised by the inclusion in the kit of chrome-plated parts, a car-type engine, and vinyl tyres for the trailer. The new box (above) has an illustration that depicts the boat from the same angle as the earlier Hemi-Hydro (below), but there are plenty of detail changes to bring the art up to date. 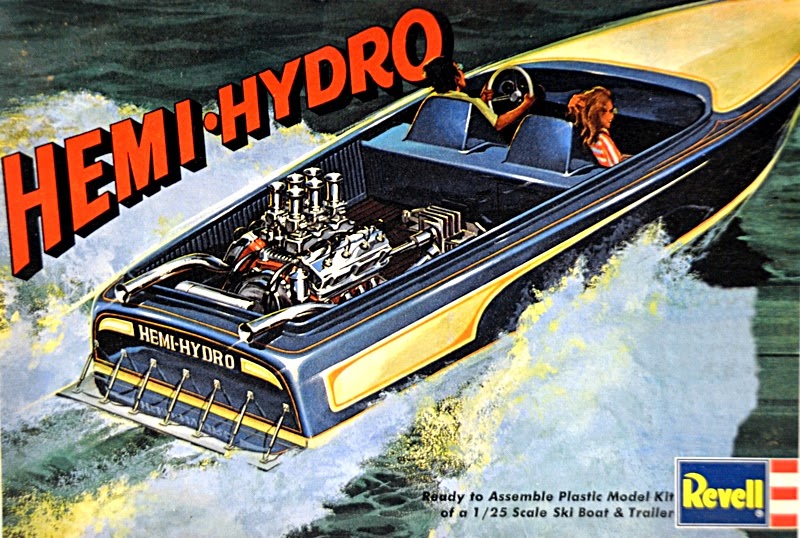 The large decal sheet (below) of the Hot Rod Hydro is far more comprehensive than before. The tan triangles can be used for the foredeck, or you can paint that area yourself. 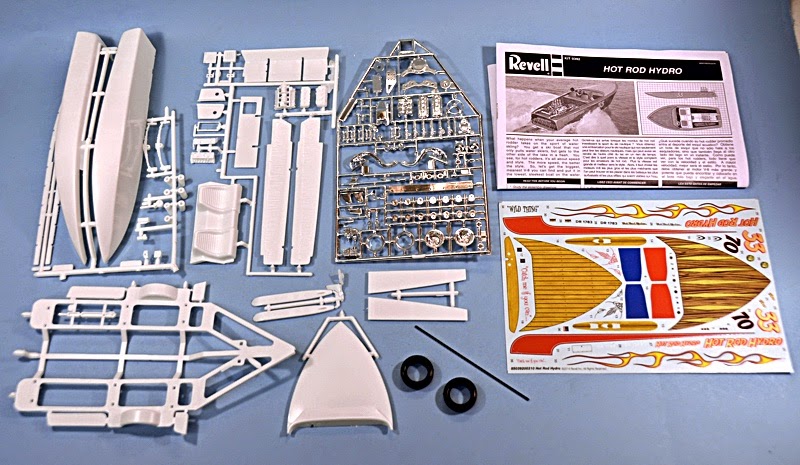 The Hot Rod Hydro has an inboard engine, in this case a Chrysler Hemi V8, so adding detail - such as ignition wiring - can be done as with an automobile engine. The hull is a two-piece moulding, and strictly speaking, items such as the propeller shaft need putting in place before the halves are cemented together. But the shaft can be cut in two, and the hull cemented ‘as one’, to allow the filling of seams, and sanding to get a smooth finish.

The Hot Rod Hydro has two large foredeck decals, though you can paint this area if you wish. When I made the Hot Rod Hydro, I first painted the hull in a wood colour, then masked and painted the exterior with metallic Moonlight Blue, a new shade in the Humbrol range. 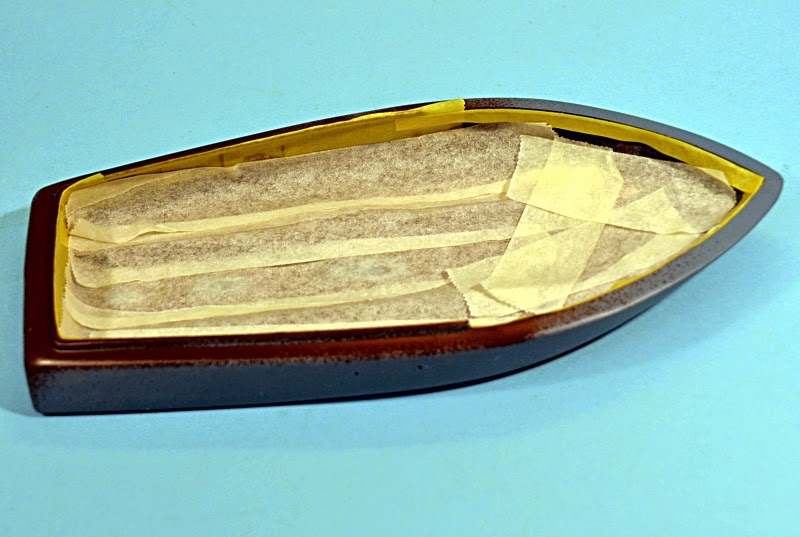 Painting the hull (above) with inner surfaces in wood finish, then masking applied.

Moonlight Blue has been applied (below). Note that the foredeck section at right has been masked, otherwise the blue would probably show through and darken the decal. The area over the instrument panel needs painting anyway. 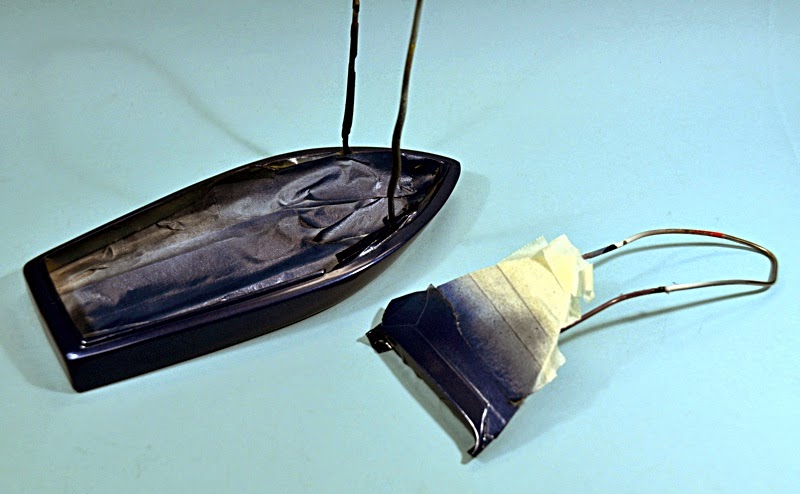 Masking the seating (below). Here the white has been masked for the seat centres, the rest will be sprayed in Moonlight Blue. 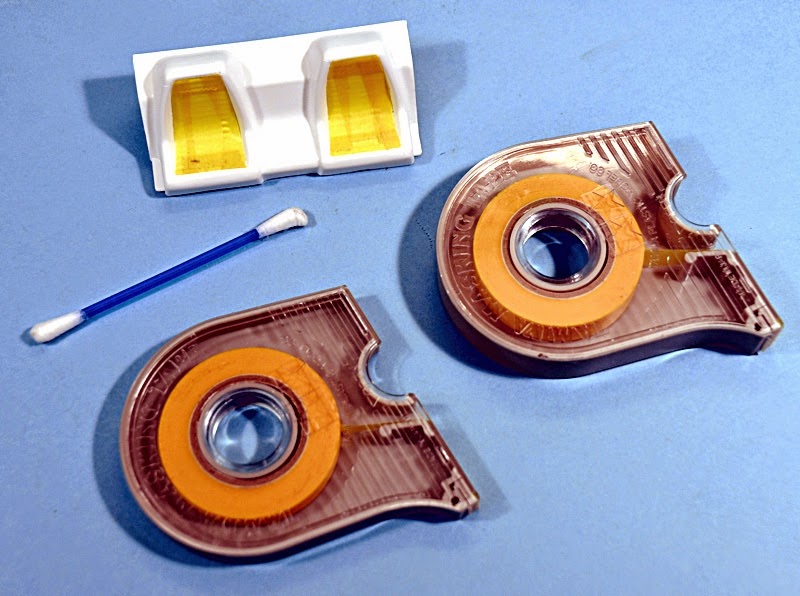 The finished engine (below) looks the biz with plenty of detailing. 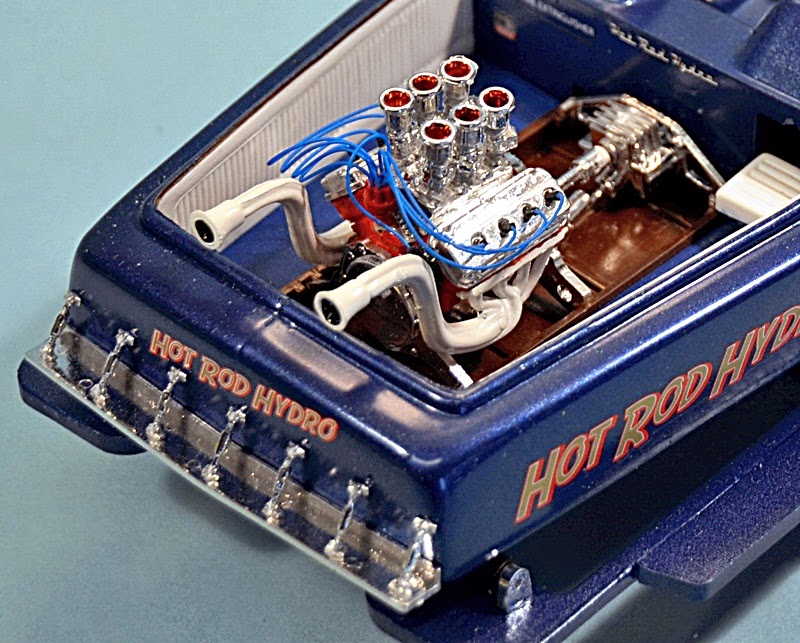 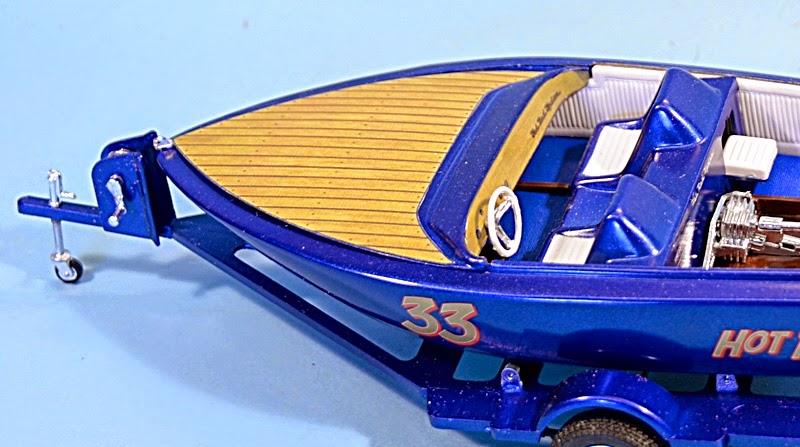 The Hot Rod Hydro kit includes large foredeck decals to represent strip planking, though you can paint this area instead, if you wish. Note (above) the nicely moulded winch and jockey wheel assembly.

Although I had found early versions of the new Humbrol acrylic aerosols didn’t actually give a high-gloss finish, the Moonlight Blue I used for the Hot Rod Hydro was pretty good straight out of the can. The seats (below) were painted white, then I masked off and painted the centre-section and surrounds. 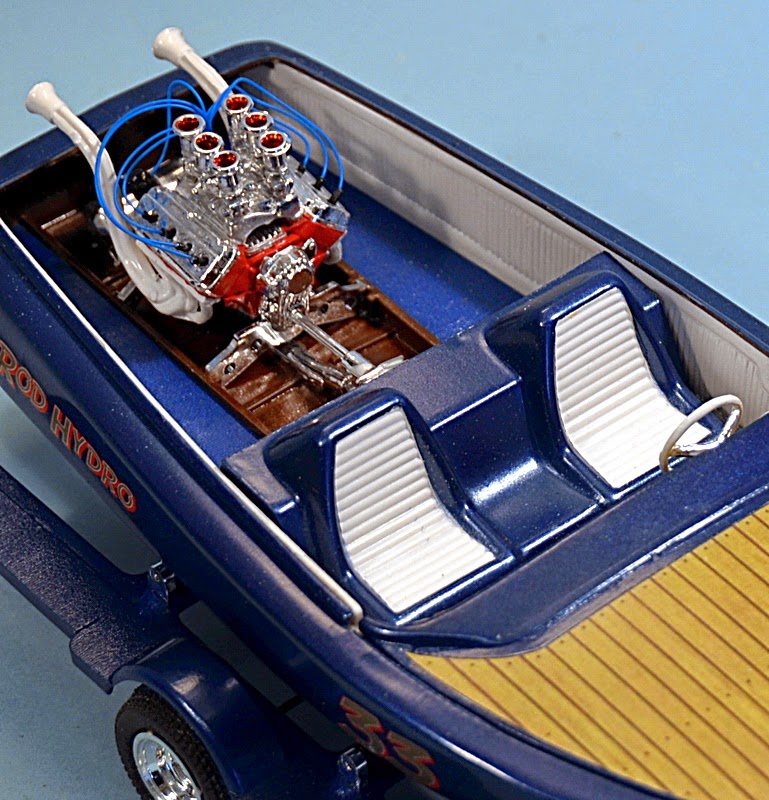 I painted the trailer in the same Moonlight Blue, then the rollers, on which the boat rides, matt black. You could add thin cord to attach the winch to the bow cleat. A trailer hitch is supplied to hook on to your favourite tow vehicle. Finally, you get a nicely moulded pair of water skis in the box - you could add a realistic water diorama, maybe even a bikini-clad waterskier. 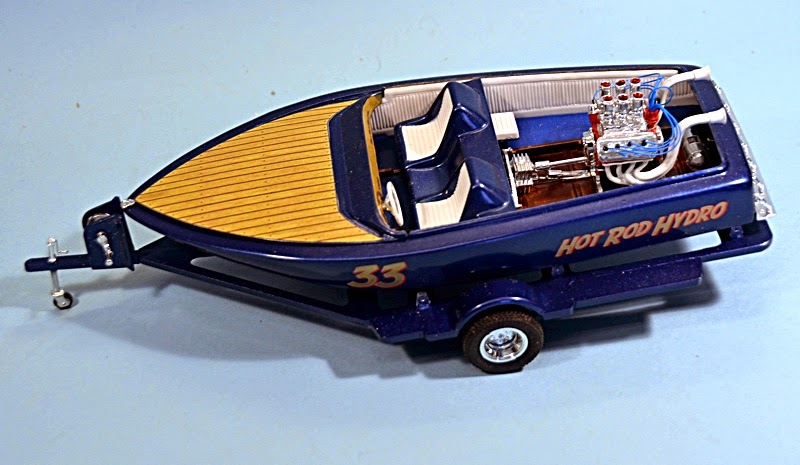 The earlier Hemi Hydro kit had some changes to the original Drag Boat, two to the boat itself, and one to the trailer. The boat changes were subtle but noticeable. The headers - exhaust pipes - for the Hemi V8 engine were altered, as was the seating, which was changed from a full-width bench seat, with two singles behind, to two large seats in front, a single jump seat behind.

Adding a tow vehicle to the Hot Rod Hydro (above, below) turns the kit into an excellent display piece. The Revell 1965 Chevrolet shown comes with its own tow hitch, though one is also supplied with the Hot Rod Hydro. 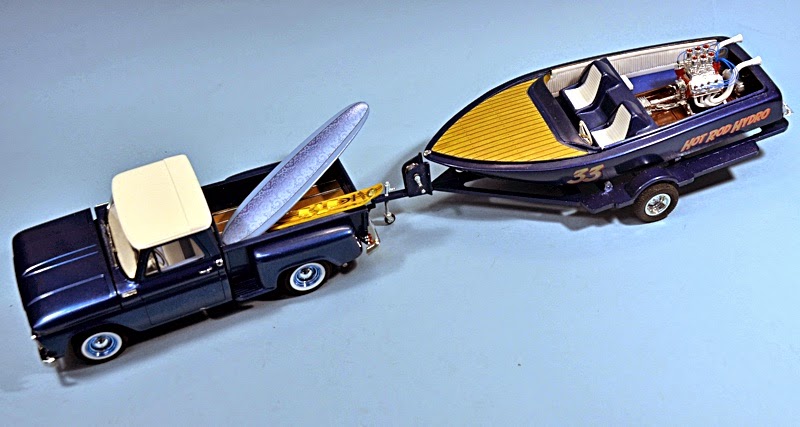 The Hot Hod Hydro’s trailer includes steps on either side, at front and rear of the wheels. Other than the greatly increased decal sheet, these are the only changes.

The previous Hemi Hydro issue (below) was near-identical to the new Hot Rod Hydro, apart from the steps and decal sheet.

The very first issue (below) when the kit was labelled as the 'Hot California Custom' Go and Show Drag Boat with trailer. 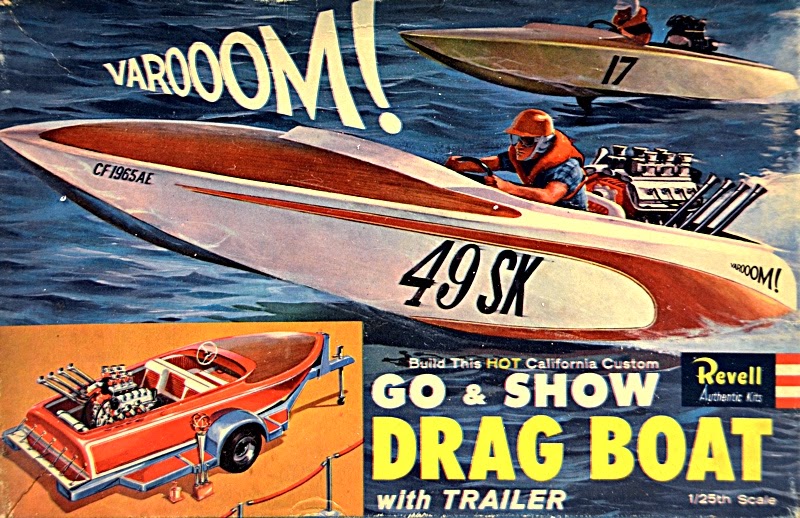 The Drag Boat listed full-size "Speed and Show" team customizers on the side panel (below). Most well-known in this lineup is is Ed ‘Big Daddy’ Roth, but the others all had creations kitted by Revell.

The other side panel of the Drag Boat shows (below right) the drag racing bucket seats, items that are omitted from the Hot Rod Hydro. 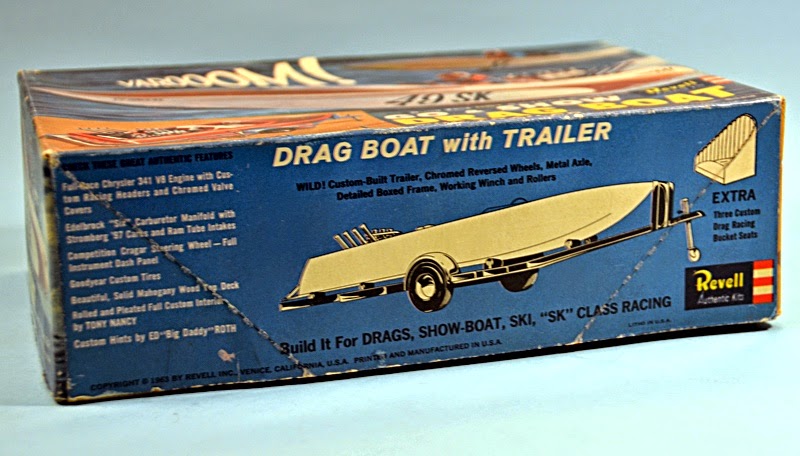 An original partly-assembled kit (below) seen here in a rather sorry state. 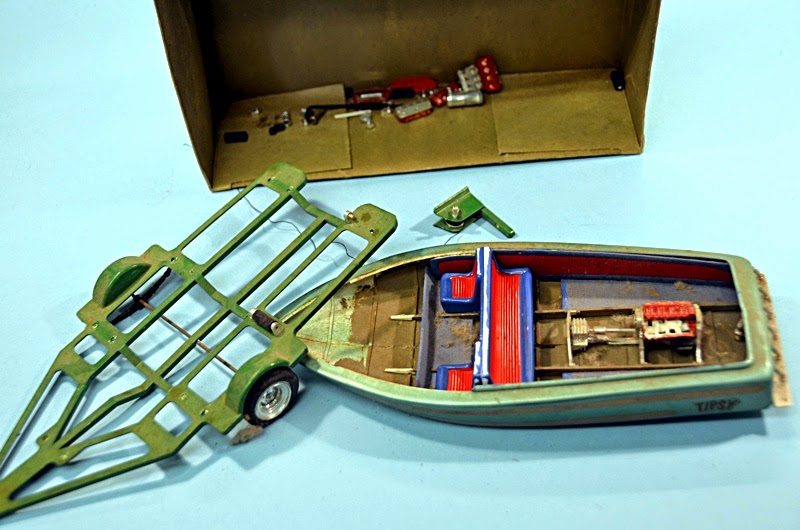 But I rebuilt it with some new parts, into an original version with bench seats and individual exhaust headers (three pix below) but using some of the new decals. Colour this time is Testors Aluma Yellow. 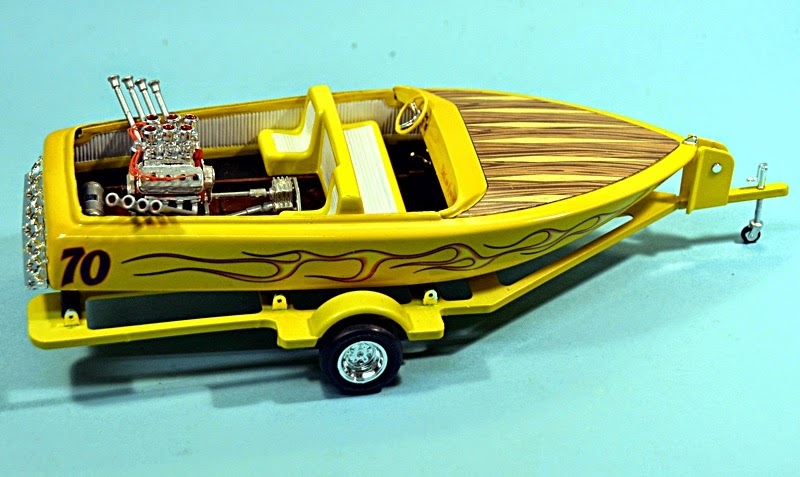 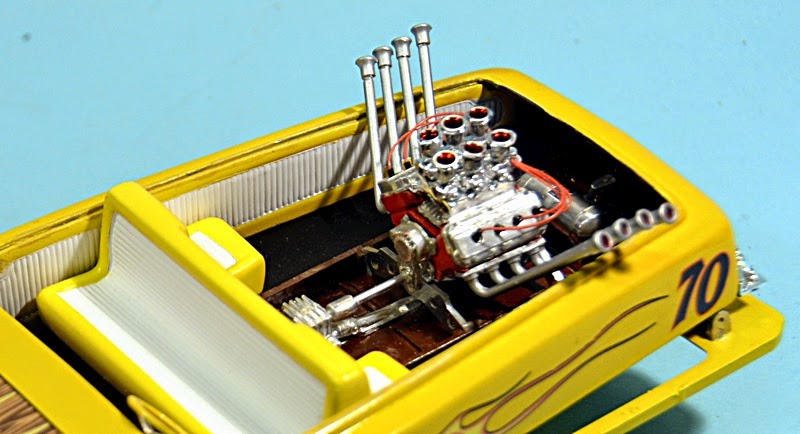 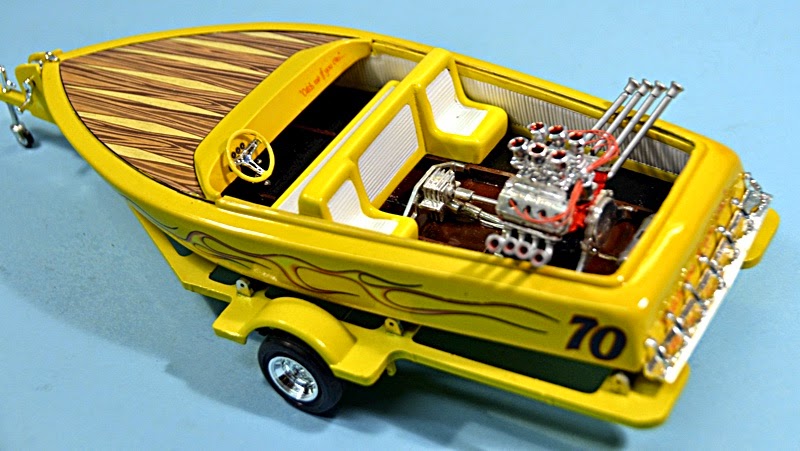 Old and new versions seen (below) for comparison. Differences are in the seating, exhausts, and new trailer side-steps front and rear of the wheels. 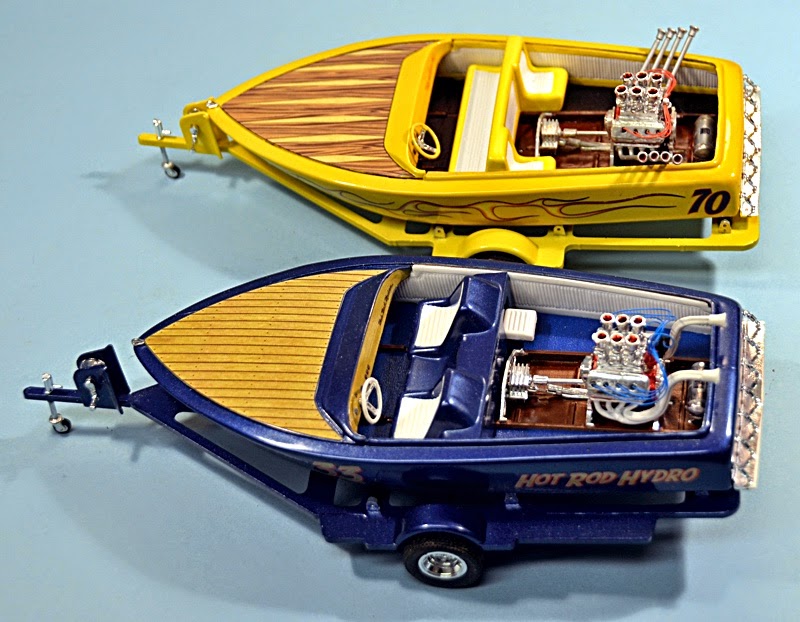