BIG 1:6 SCALE ROBOT B9 FROM THE ‘LOST IN SPACE’ TV SERIES 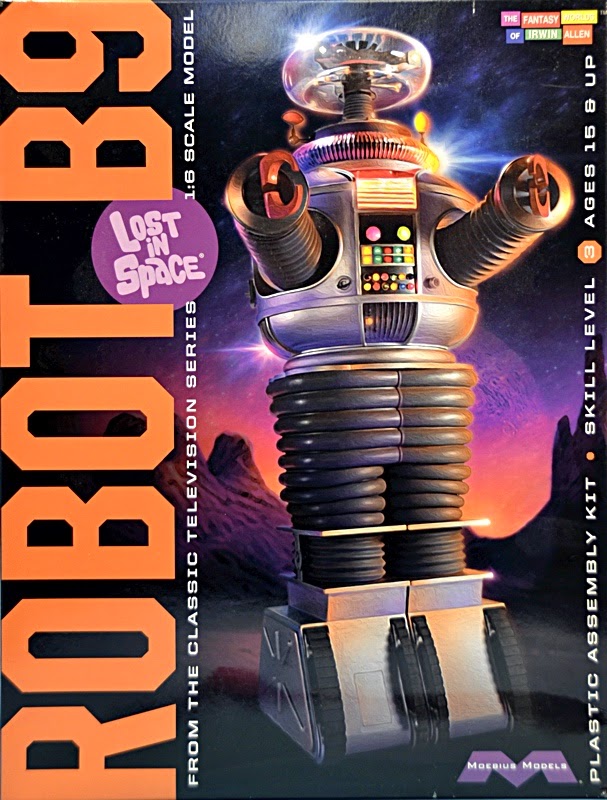 THE ROBOT B9 FROM THE 1960s TV series 'Lost in Space' is one of the best-known screen robots, though its role often seemed to consist mainly of flailing its arms around, while intoning the warning, “Danger, danger, Will Robinson.” However, Robot B9 is an iconic design and one that’s welcome as a 1:6 scale kit from Moebius Models.


Mat Irvine: The Moebius kit lists the robot by its technical designation, B-9 Class M3, and although very occasionally this was mentioned in Lost in Space, most of the time it was referred to as simply, ‘Robot.’

Comprehensive component set (below) include a group of flexible parts (lower right). 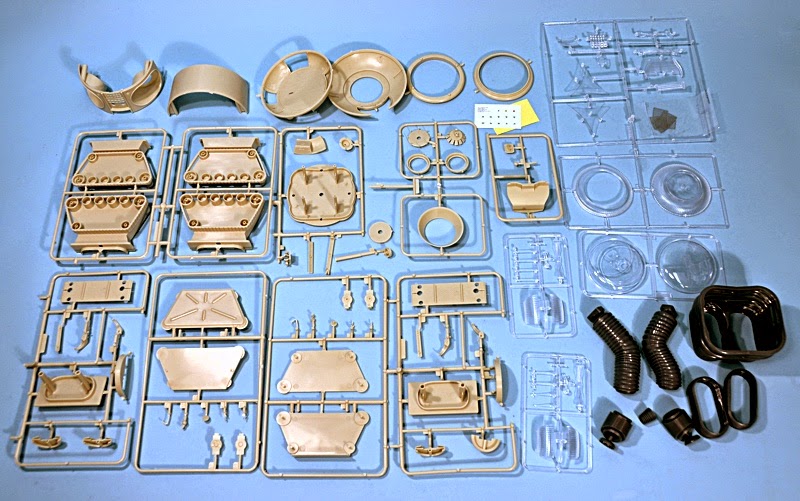 The Moebius kit is a large one at 1:6 scale, for as Frank Winspur, CEO of Moebius says, “It’s about the most popular figure scale here in the US, and it matches all the major doll figures. Also, the majority of resin figures are similarly scaled.”

B9's flexible components shown (below) in detail. The small part (lower centre) is for the neck. 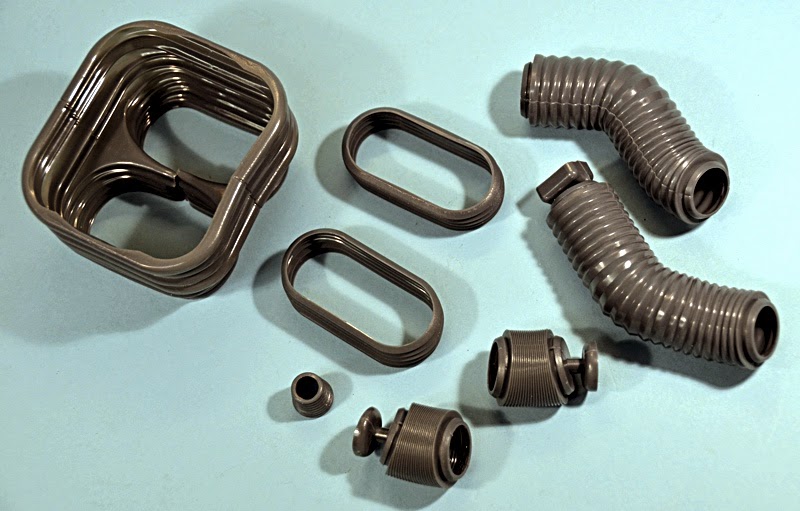 Robot B9’s main parts are moulded in light-grey plastic, while a number are transparent, these for the head and neck assemblies, and the chest pack. The arms and legs are moulded in a flexible plastic. The arms snap into the shoulder section, and into the claw hands. You get both retracted and extended versions of these, the extended ones of course being highly suitable for a ‘flailing around’ display!

Note the opening soil-sampler panel door (below) on one of the track assemblies. 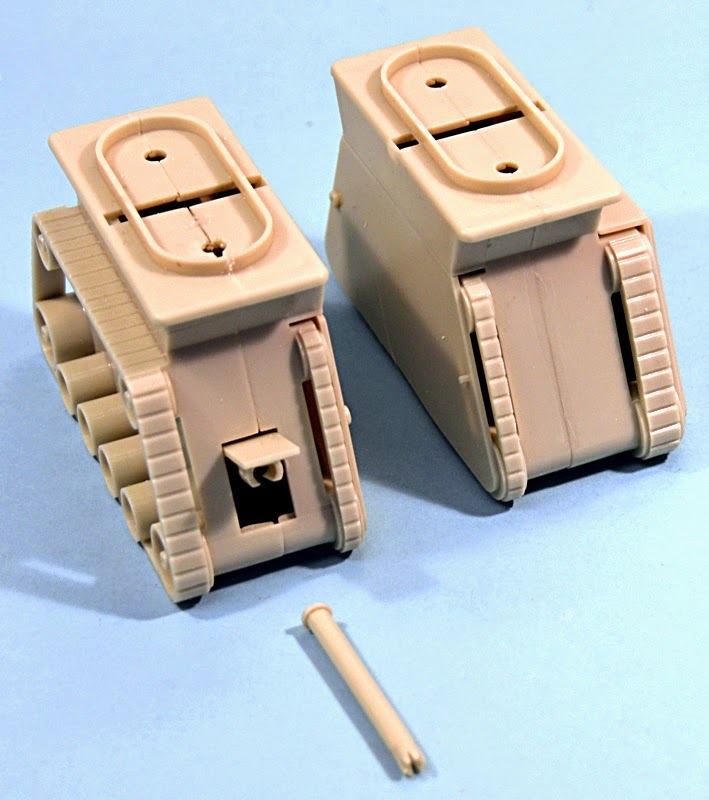 Robot B9’s moving features are restricted to rotating head and upper body, while the access door on the starboard track assembly opens for the soil-sampler arm (above). The four tracks are non-functional, which is a shame, even if manufacturing them might be rather tricky, even in this large scale.

I painted the tracks (below) first with satin black. After this, I masked off and followed up with an aluminium shade. 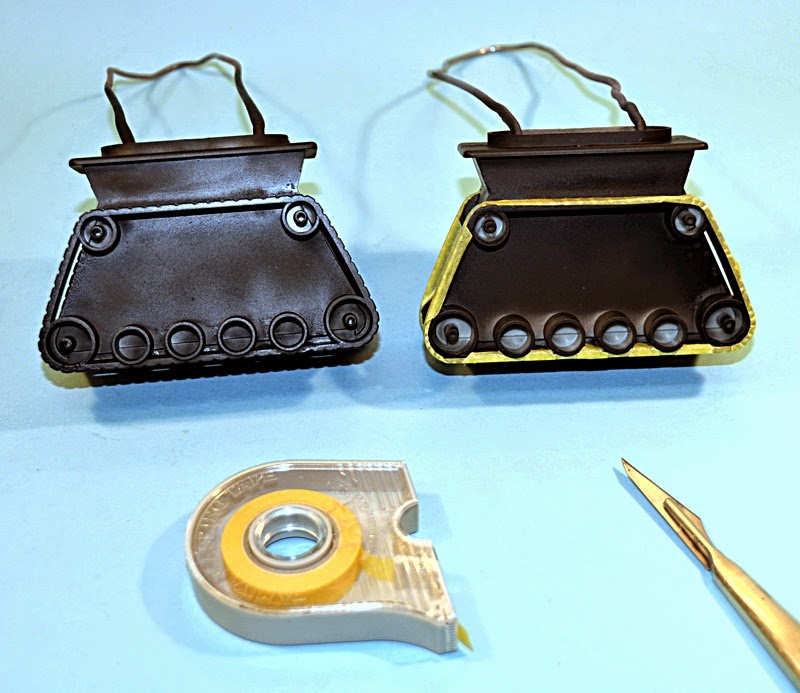 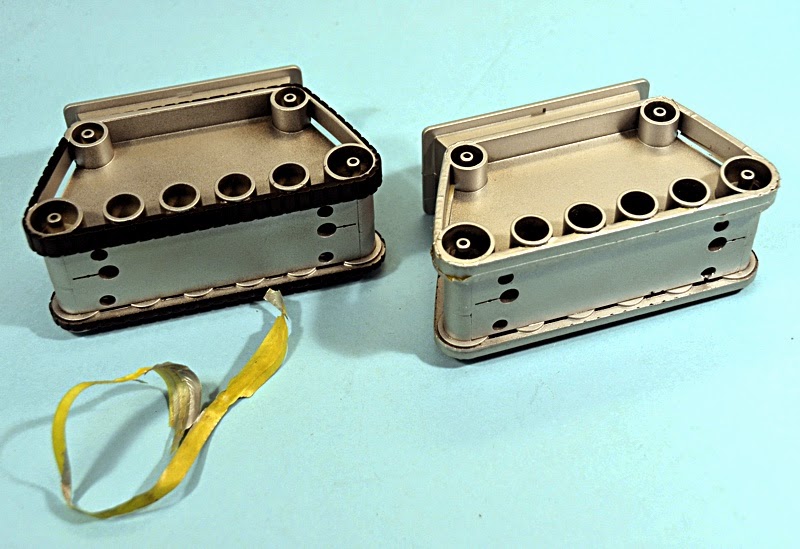 The main colour of Robot B9 is matt aluminium, and for this model I used a Tamiya product, while the flexible sections were left unpainted. The only bright colour touches on the finished robot are the gloss-red claws, and various buttons on the chest pack.

Fitting the knee-hinge components (below). 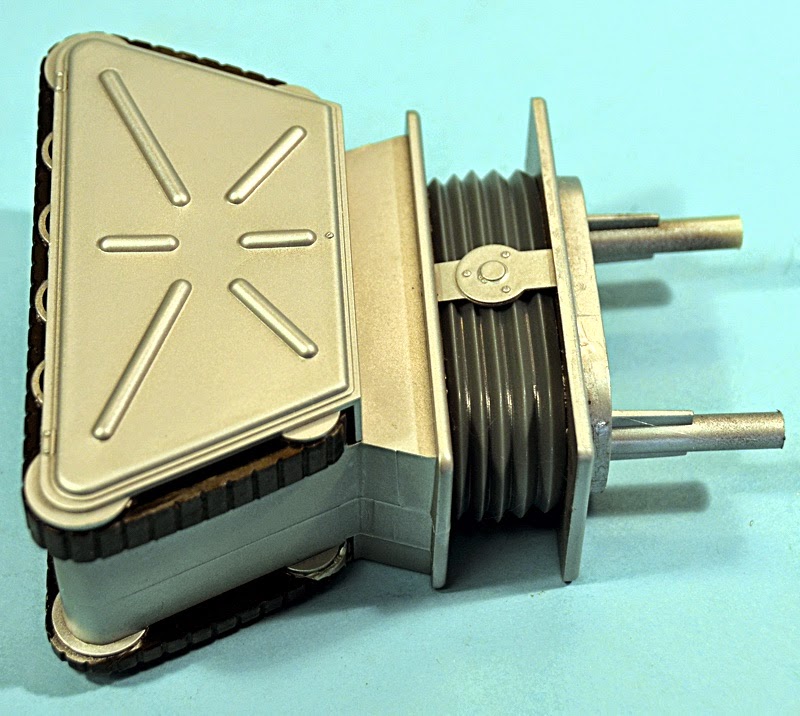 Fitting the upper leg section (below) which is supplied in one piece. 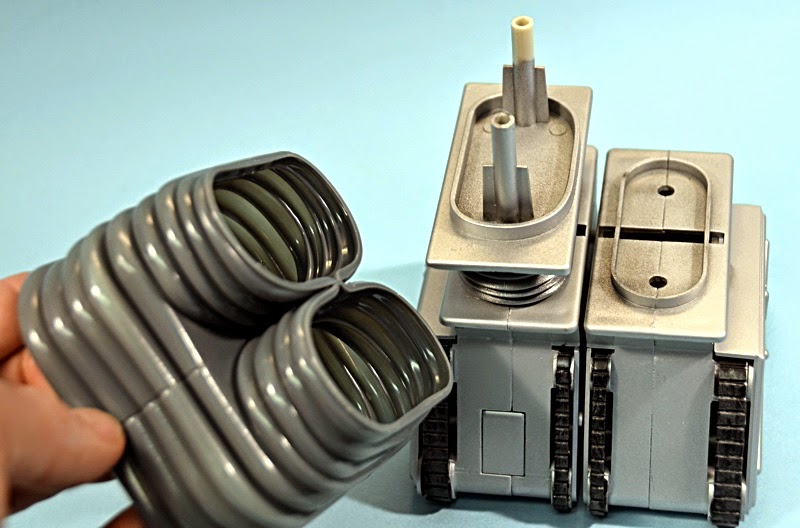 The completed leg-cum-track unit (below). The modular construction helps assembly to go smoothly. 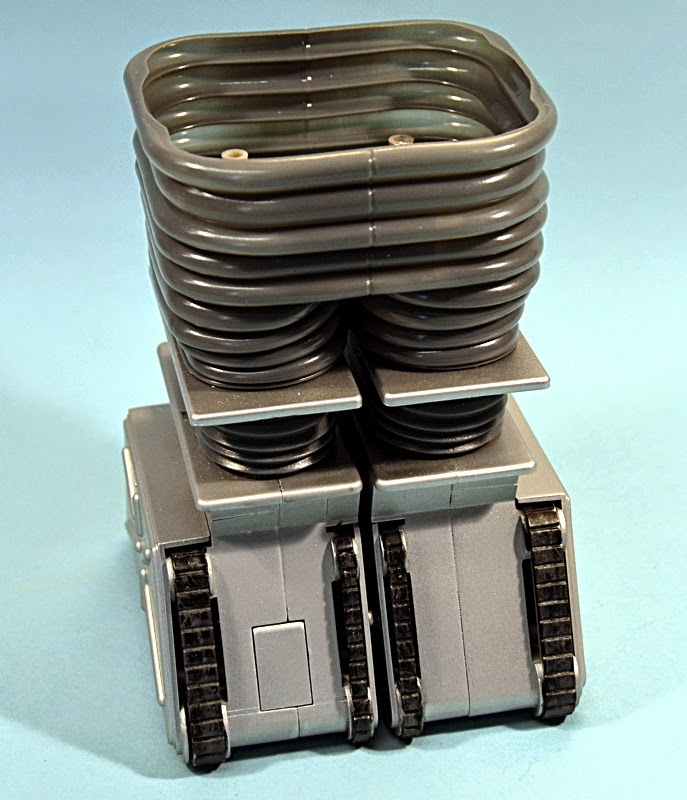 The robot's torso (below) has pre-cut instrument panel display apertures. 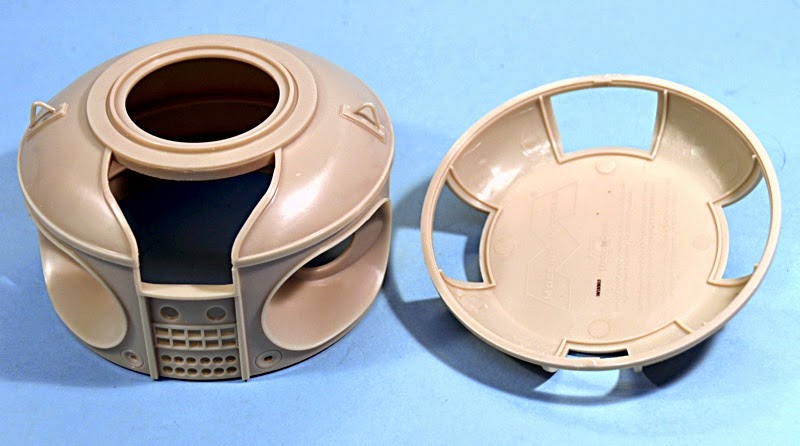 Shown (below) are the curved transparent sections, with photo-etch grids that fit behind them. 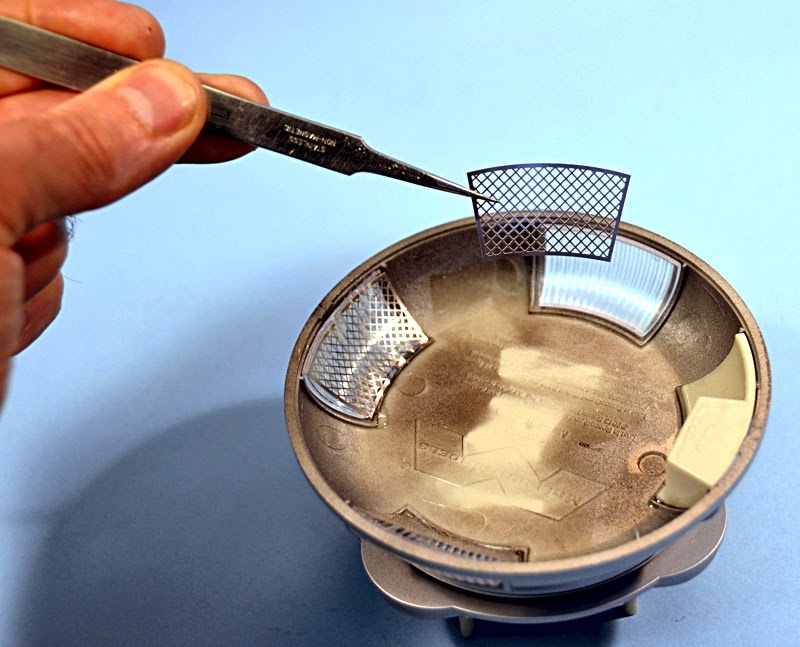 The lower clear section of the head has a centre part (below) shown here masked off for painting. 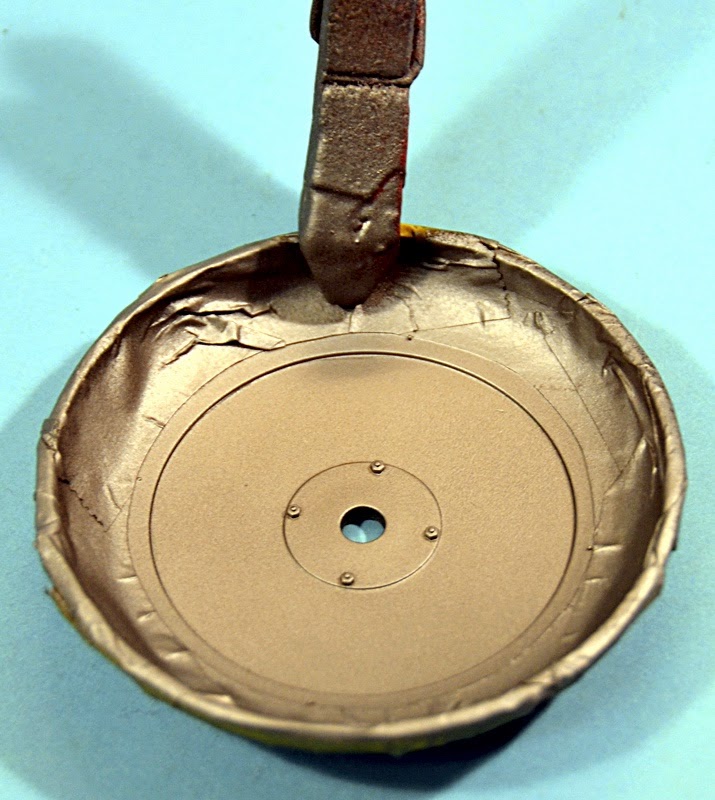 Robot B9 has 'hands' that are claw-like mechanical grippers, seen (below) as painted during assembly. 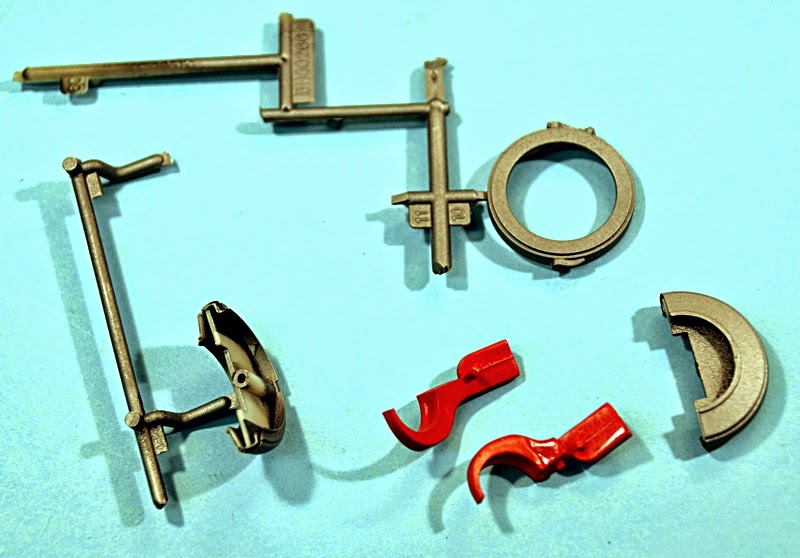 Tamiya has a good range of transparent paints (below) and I used these to tint relevant components on B9's chest pack.

The instruction leaflet details the colours used in the TV series, and the transparent paints come in useful for small details in the lower chest pack, the programming bay, and the power pack that sits on the main body side. 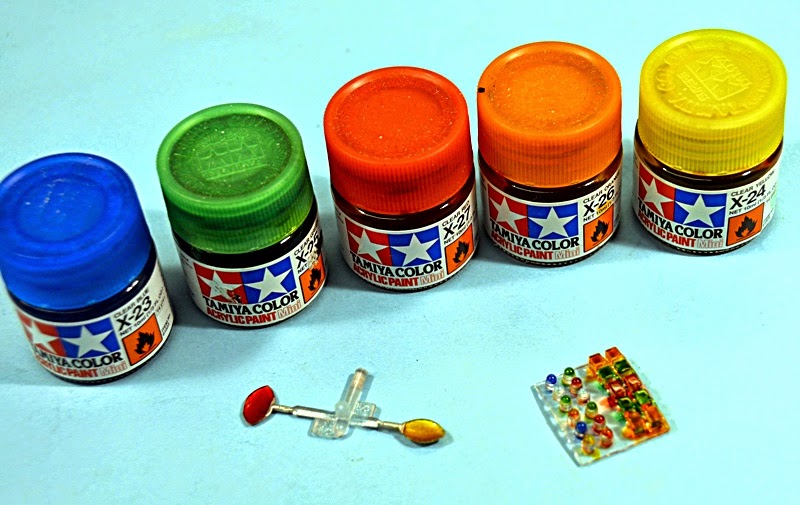 Once painted, the various panel lights (below) have a pleasing, jewel-like quality. Here, the pack has just been fitted into B9's chest. 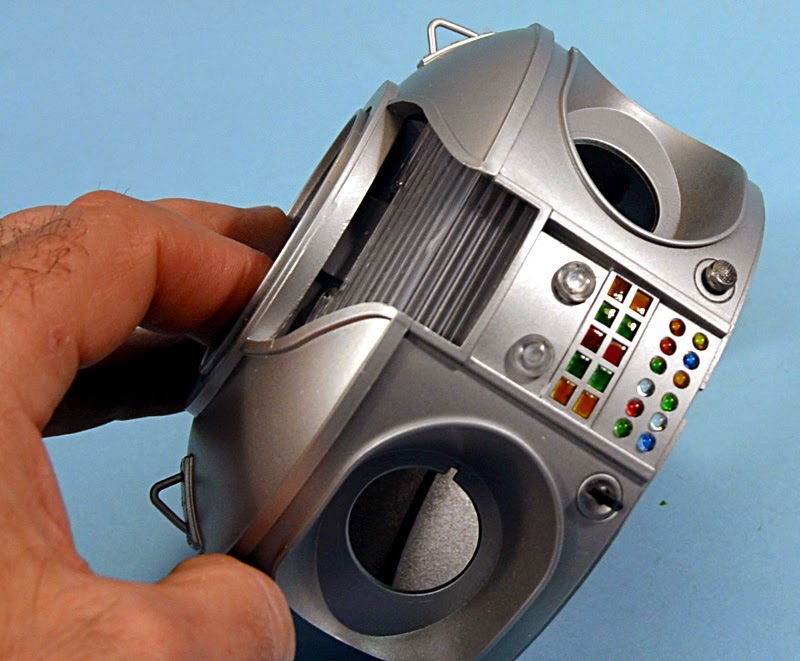 B9's extended arms are shown (below) fitted in place,  though you can also use the shorter, retracted pair if you wish. 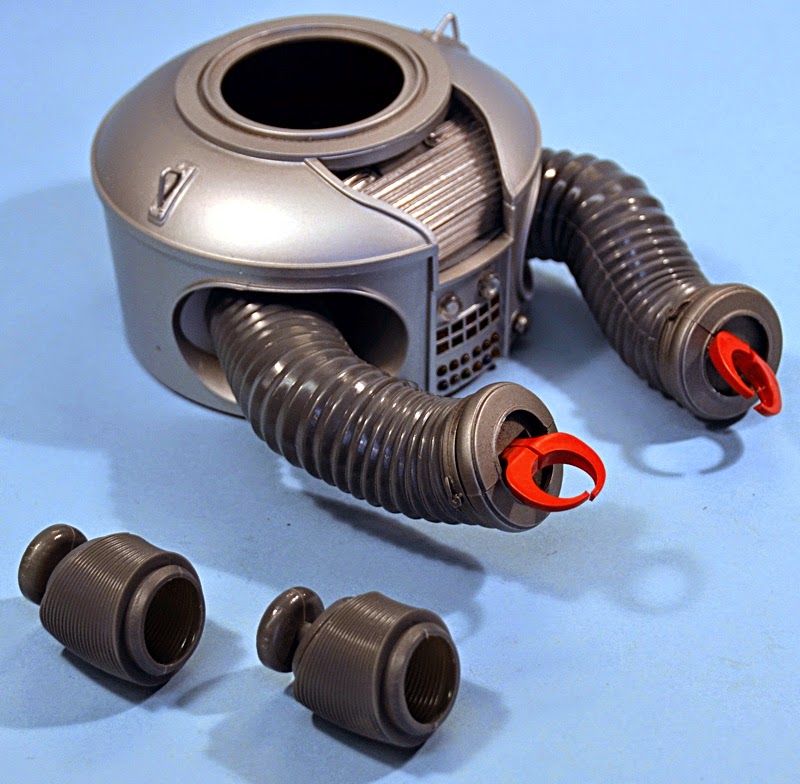 When fully assembled, the model (pictures below) makes an impressive figure that stands just over a foot tall. For display purposes, B9 just needs a companion in the form of its better-known mechanical cousin, Robby the Robot, star of the 1956 movie Forbidden Planet. 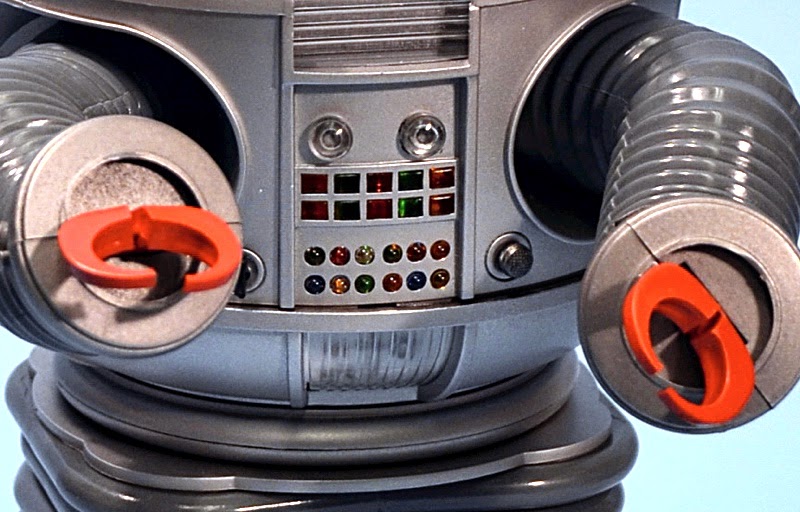 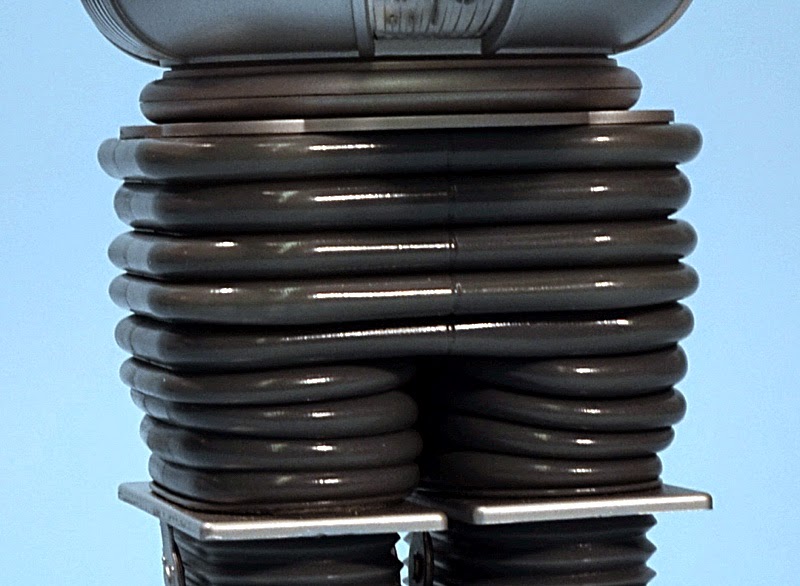 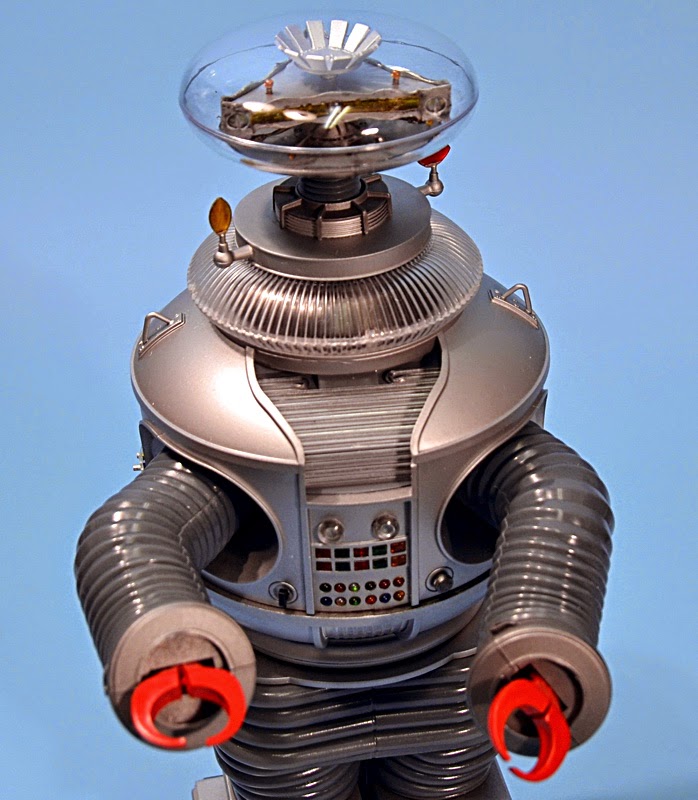 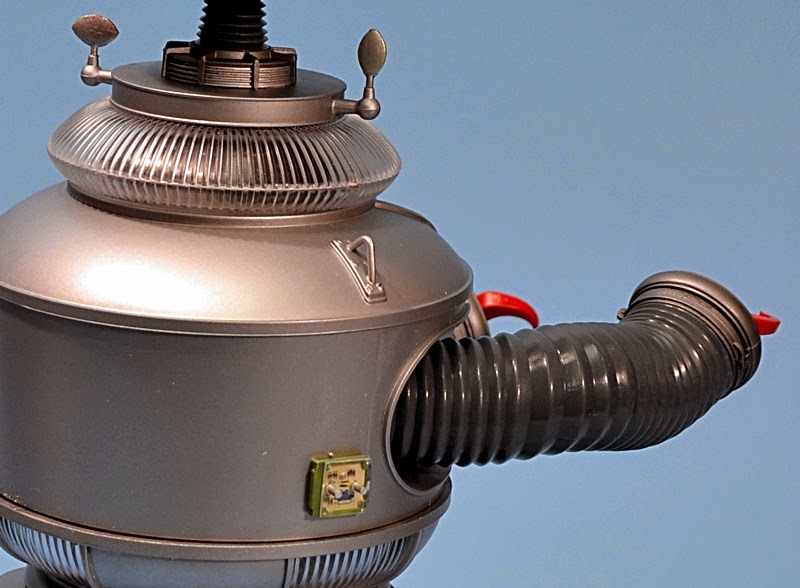 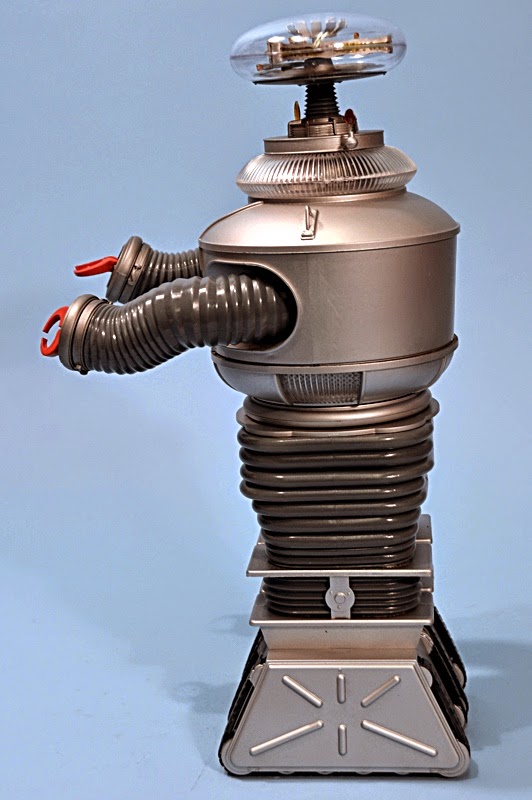 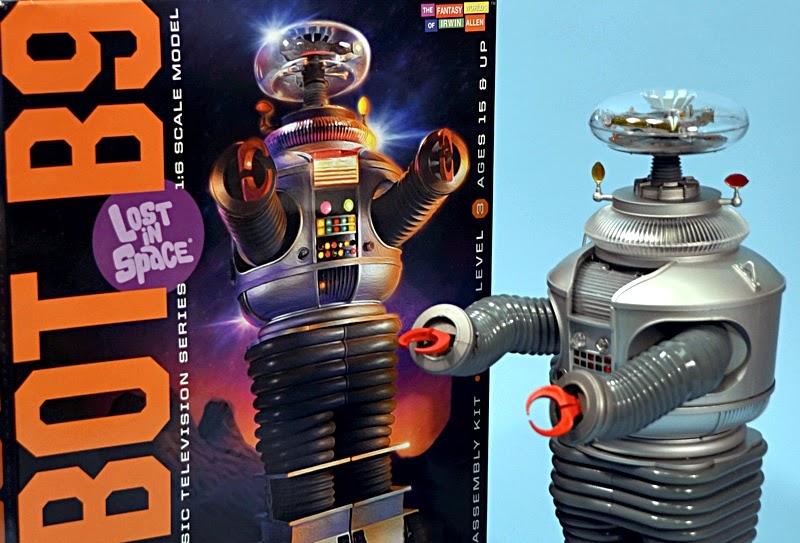 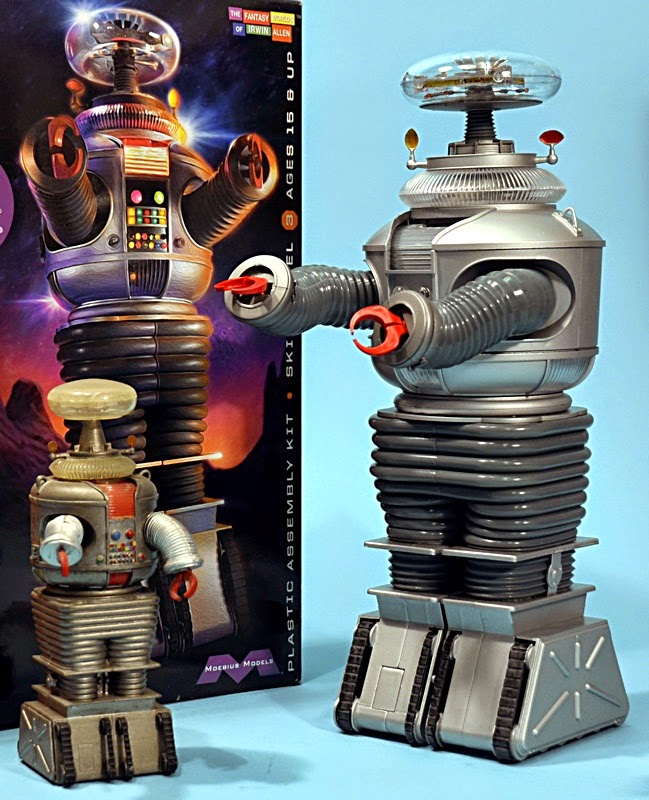 The original Aurora 1:11 scale version (above and below, left) stands next to the bigger 1:6 scale release from Moebius. 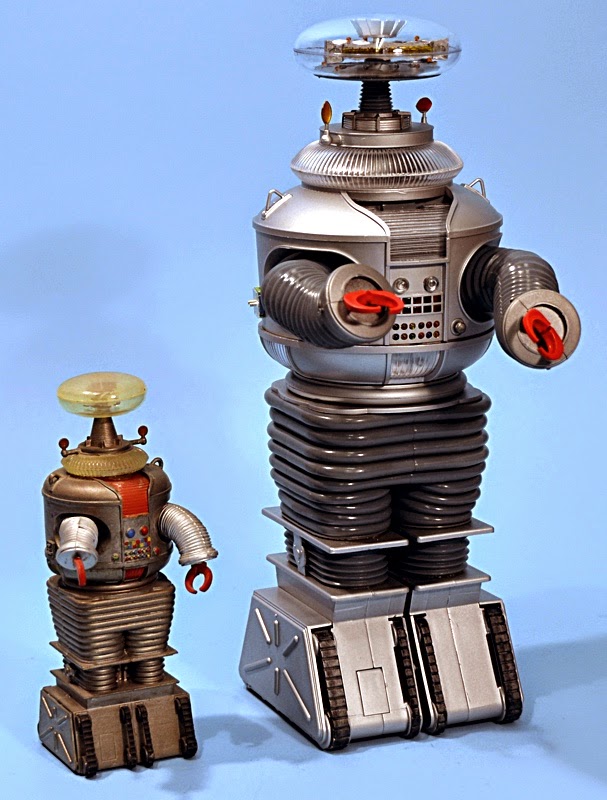 And here is the cast of Lost in Space (below) with Robot B9 standing behind. 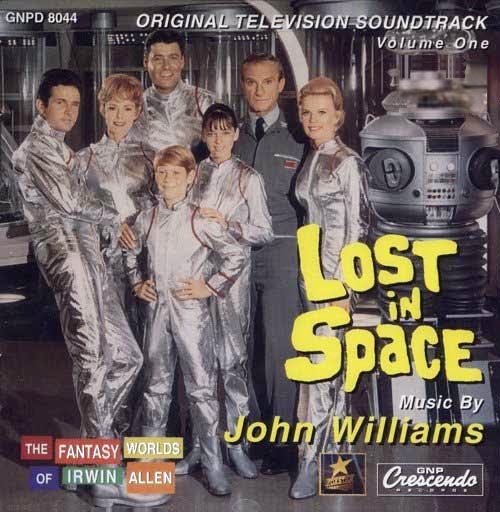 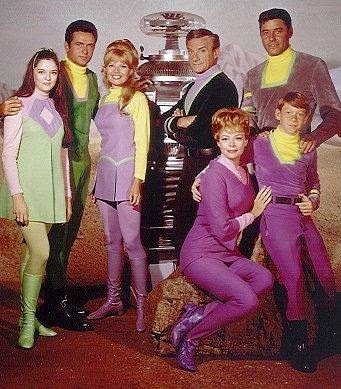