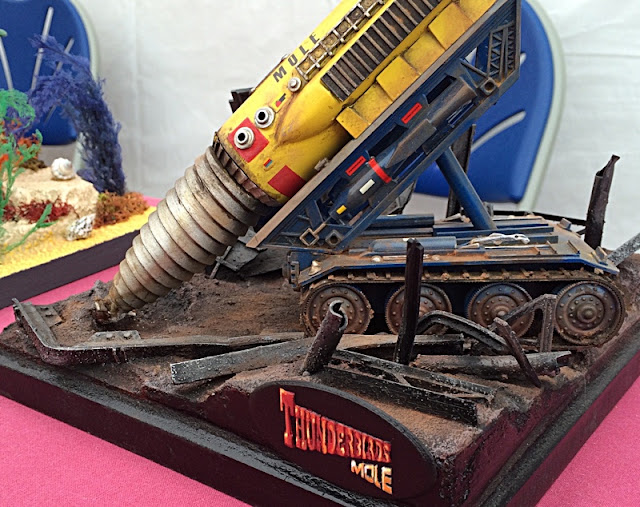 GERRY ANDERSON ENTERTAINMENT ruled children's TV in the 1960s and 1970s, with series after series, all achieving great popularity. Above, the Mole, from the all-time classic, Thunderbirds.

Forward sweep wing was an unusual feature of Thunderbird 2. It's been tried a few times with real aircraft, but materials technology has not yet been advanced enough to make it a production possibility.

The model (below) to about 1:200 scale, shows a neat diorama launch pad. Good as it looks, I can't help feeling it's time we saw some of these T-Birds presented in different markings. For example, it would be good to see a United Nations-sponsored version, painted white with blue UN flags.

Incidentally, a recent infographic we saw marked the XL-5 with a top speed of 24C - 24 times light speed. Does anyone know if this figure actually fits into the Fireball XL-5 fictional universe? 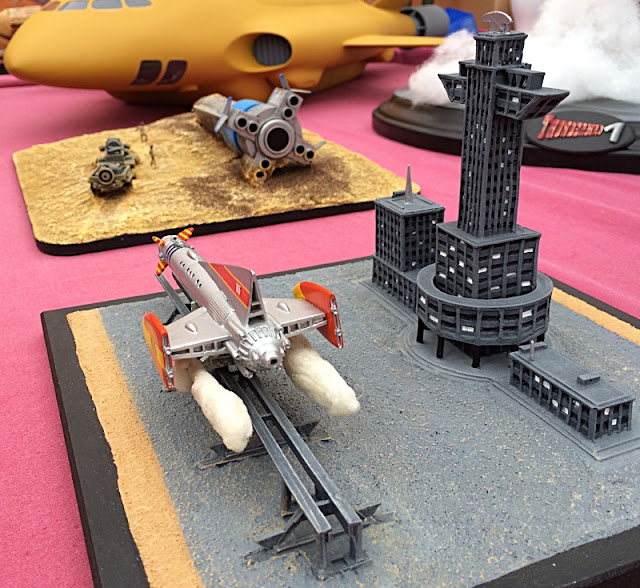 Simulated landing rocket smoke marked the Thunderbird 1 model (below right) from others at the show. It looked surprisingly realistic. The sand-painted Thunderbird 2 at left looks ready to receive its standard green finish. 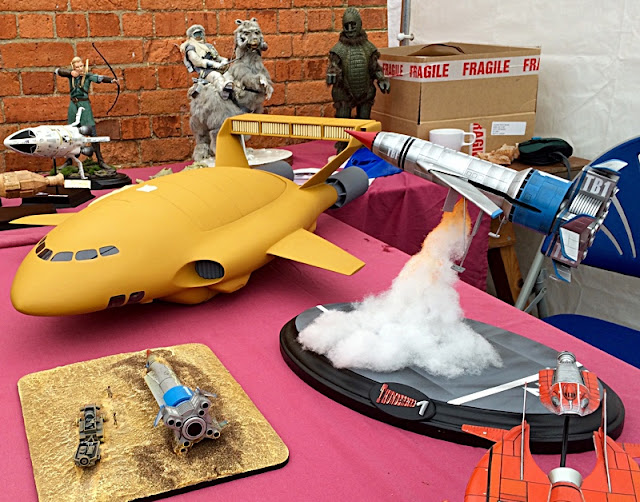 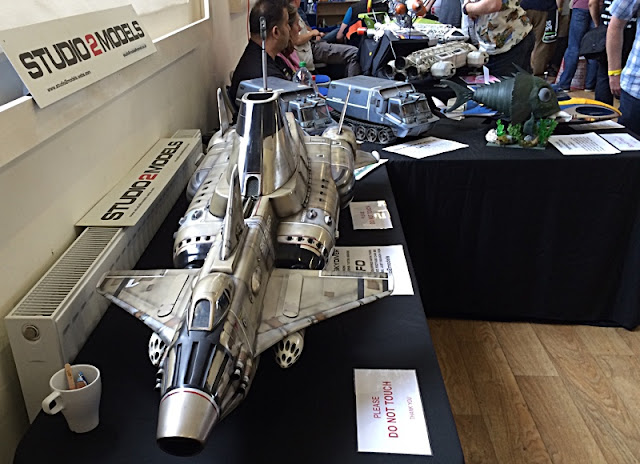 Studio 2 Models have been showing this Skydiver (above) from the UFO series at various shows. And quite right too - it's a very impressive piece of model making. 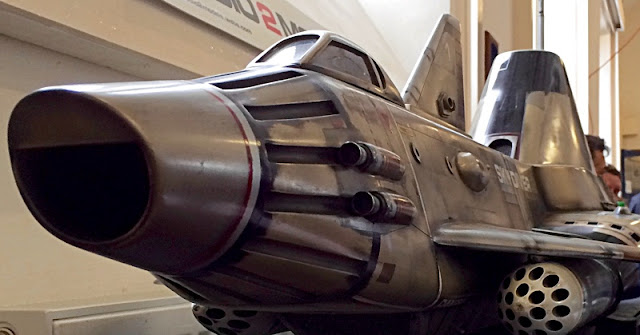 Skydiver was designed, like many other Anderson craft, by Derek Meddings. As conceived, the front section is designed to break away as a supersonic mini-fighter plane (below) called Sky-1. In fact, there were four Skydivers in the series, but Number One featured the most. 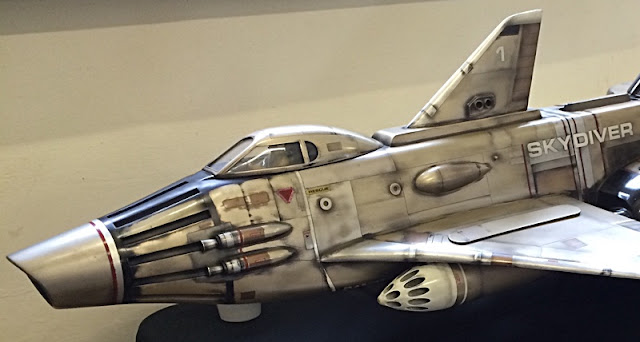 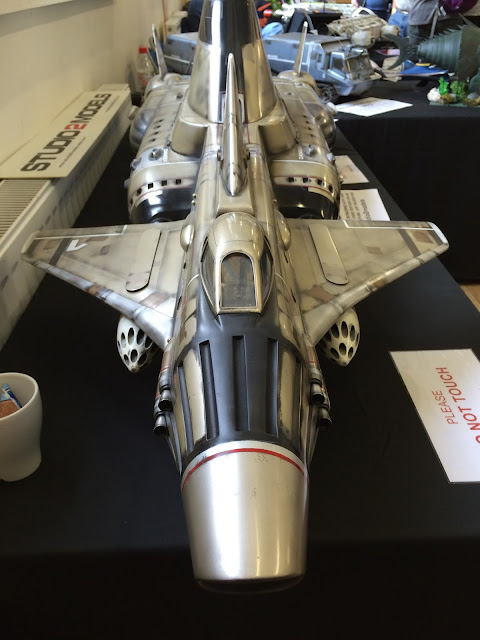 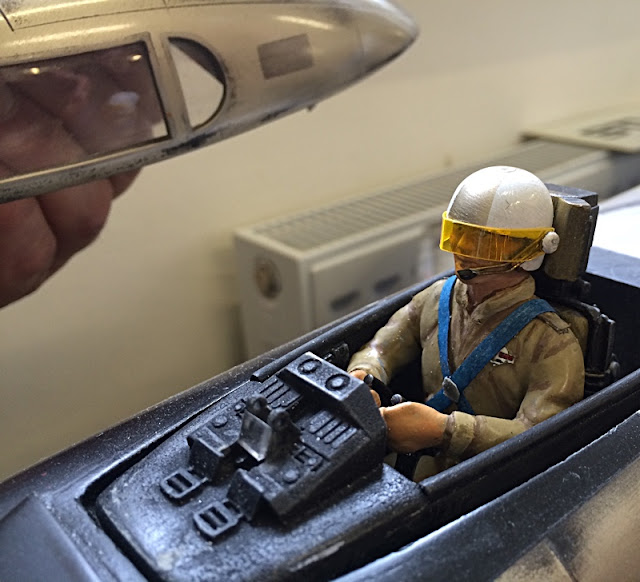 Pilot entry was through Sky-1's rear hatch, shown (below) by Mamas Pitsillis of Studio 2 Models. 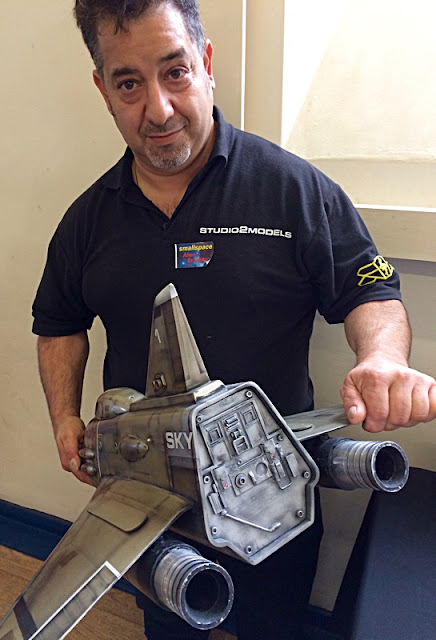 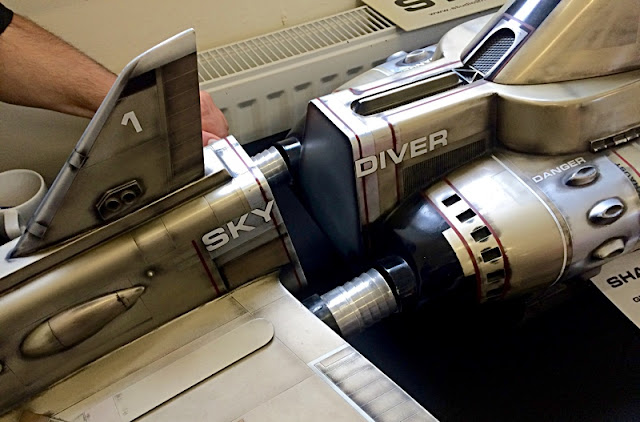 This smaller Sky-1 (below) was shown on another stand, finished and presented in a neat diorama display. 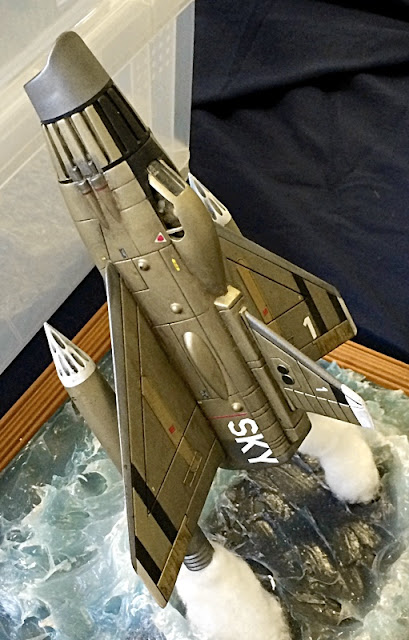 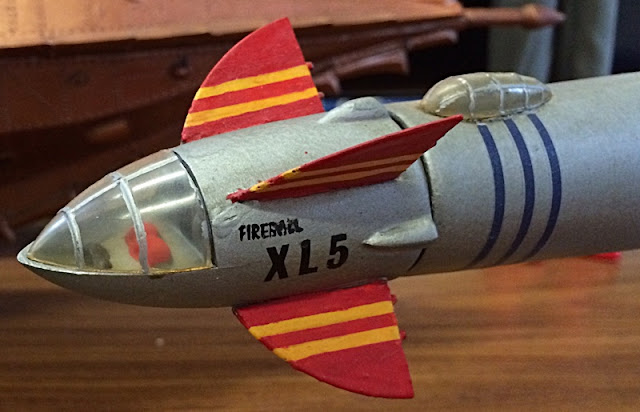 Fireball XL5 (above, below) modelled to around 1:48 scale. The bullet shaped design is very evocative of this era, which was well before the angular style that took off with movies such as Star Wars. 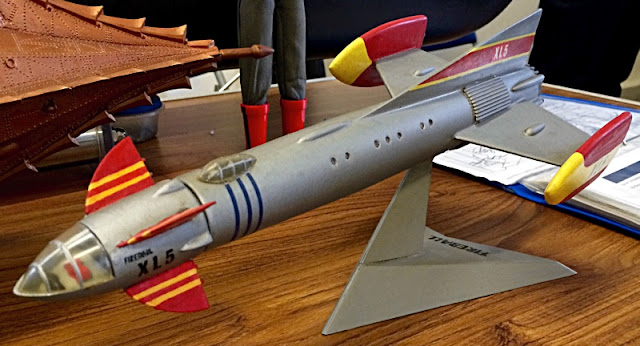 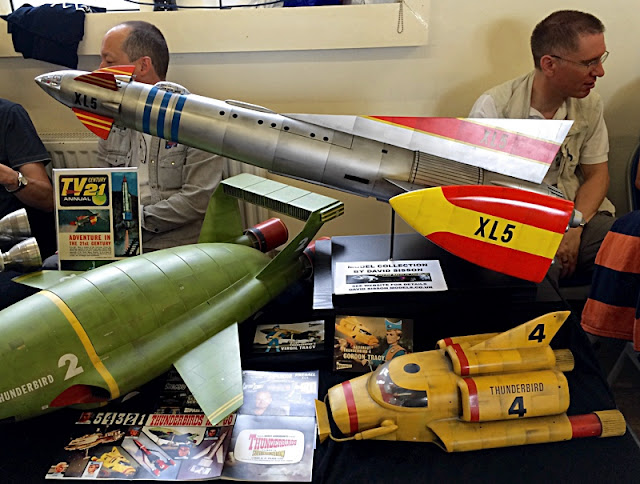 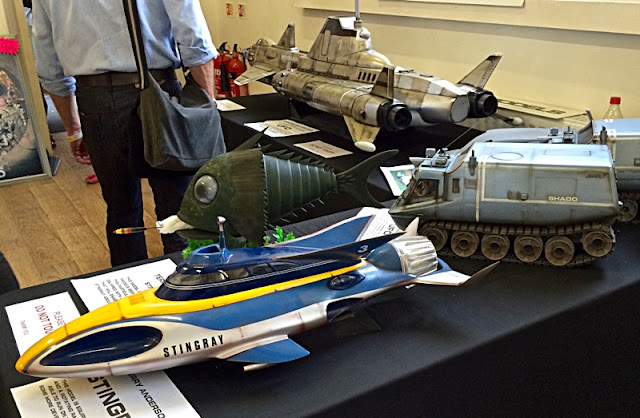 Stingray (above, below) was one of the earliest Anderson TV series, and is of course, the name for the eponymous super-sub. 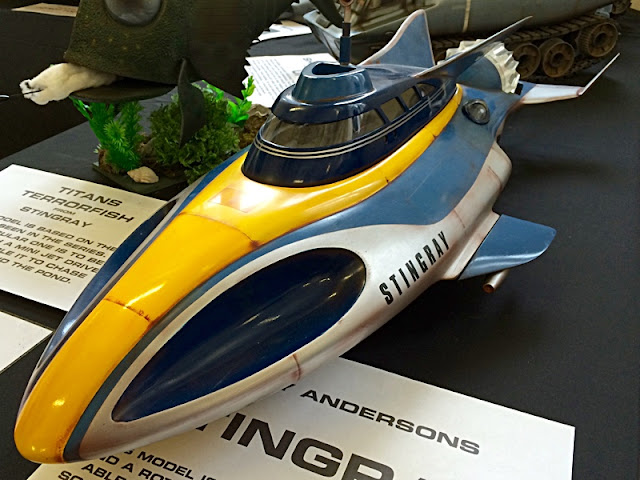 The bad guys moved around the oceans in the Terrorfish (below). It was a cute design, if not very hydrodynamic. 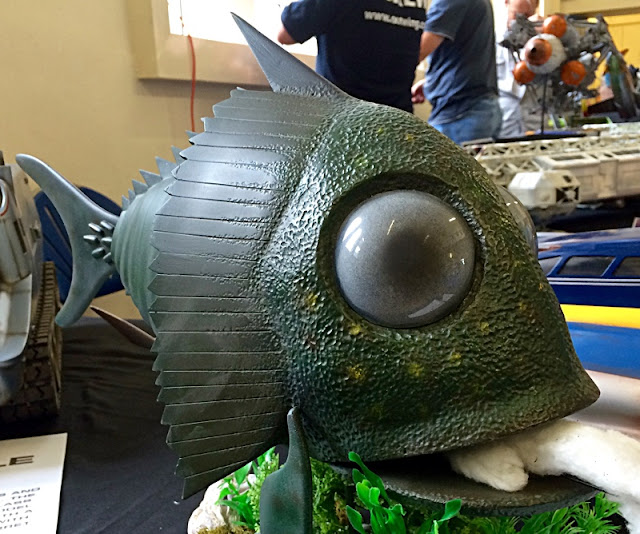 The famed Eagle transporter from Space 1999 has become a classic design, and looks as good today as when the TV series first aired in 1975. 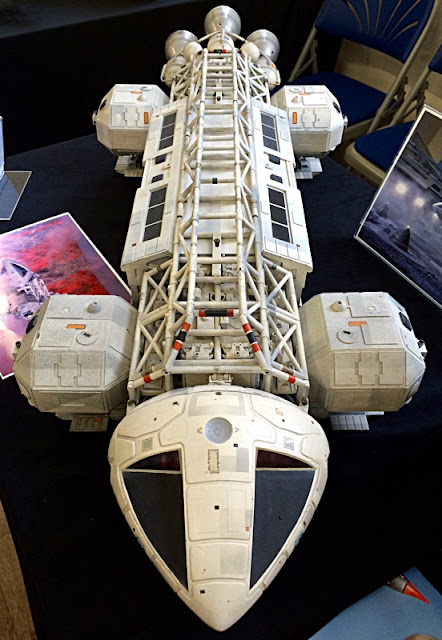 Is this the biggest Eagle model ever made? 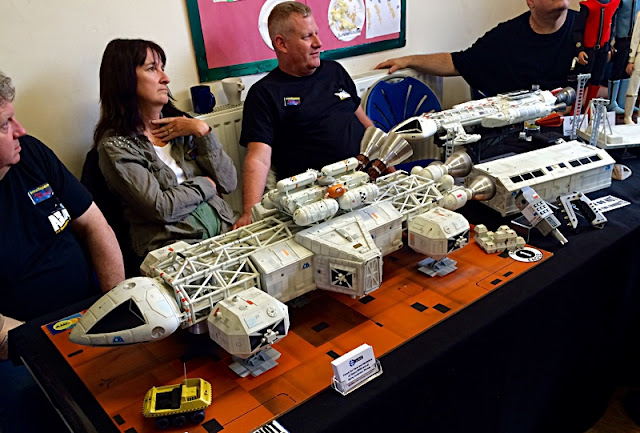 Detail view shows the great care and craftsmanship that went into the build. 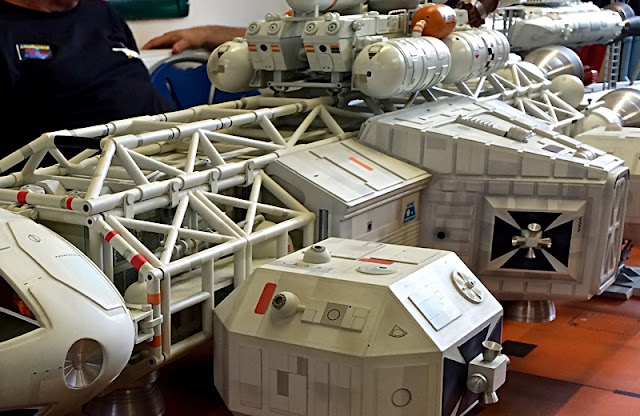 The split front windows became something of a hallmark for the various craft featured in Space 1999. Not so the alien saucer from UFO. 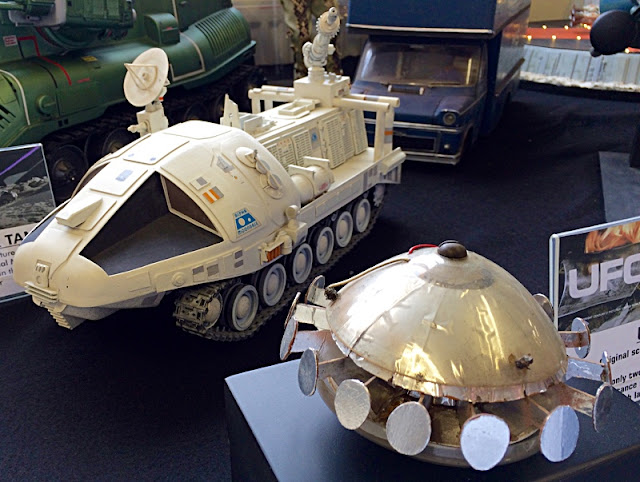 What could be nicer than Lady Penelope's FAB 1 Rolls-Royce? Maybe a modernised Ford version? Click here to see the redesign in a video we shot a while back. 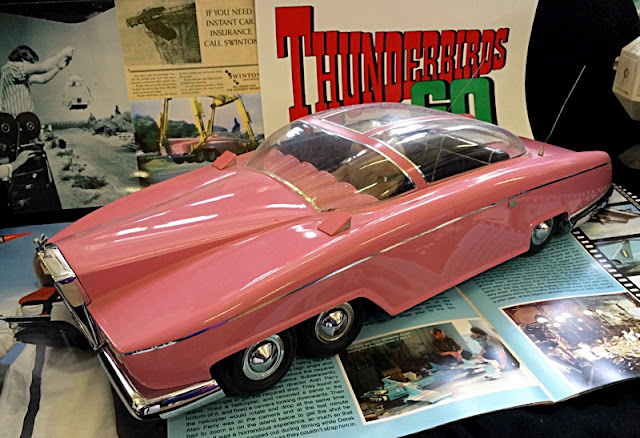 Radio control and electric power gave this UFO Shadomobile a decent turn of speed. See it in action in the Smallspace 4 video. 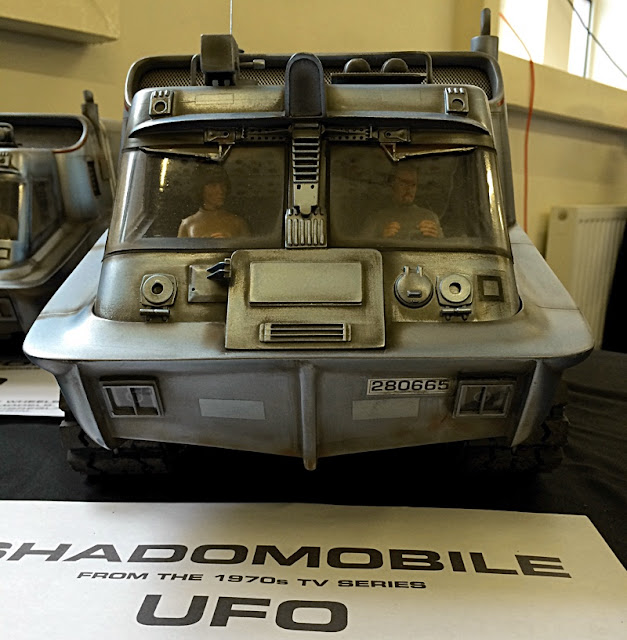 Keep watching for news of Starcruiser, an Anderson series that existed in picture strip form and as an Airfix kit. It's coming back soon, with books and more.