BEWARE! THE INVADERS ARE COMING FROM ATLANTIS 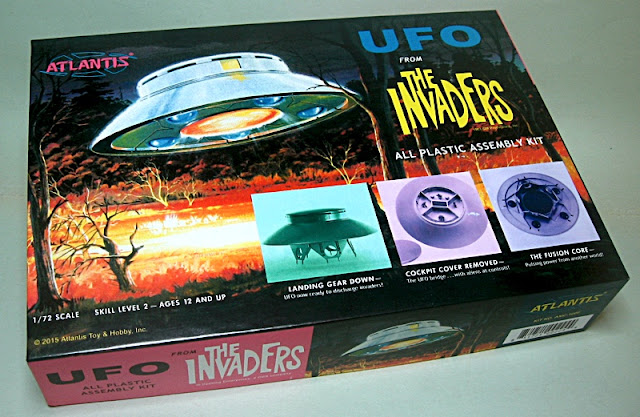 THIS IS AN ATLANTIS MODELS reissue of an original Aurora kit of the alien craft that featured in the 1960s TV science fiction series, The Invaders.


Mat Irvine reports: Andy Yanchus, kit historian, and long-time Project Manager with the original Aurora company, and now a consultant to Atlantis, has assisted with the preparation of this article.

The Invaders UFO is the archetypal ‘flying saucer’ and this 1:72 scale model features a reasonably detailed interior under the lift-off top. Inside, there is a set of walls around the outer rim, with parts that divide the space into four equal areas, and a further space in the middle. The walls are covered with suitable alien instruments, all which need to be painted. Decals have never been provided for these, and this reissue continues the tradition. There is a seat (the Captain’s chair?) and three transporter stalls for the four figures supplied in the box. 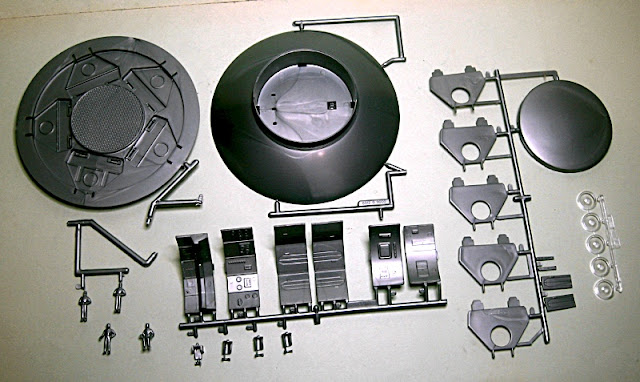 The instructions (below) label the model as ‘The Invaders Space Ship.’ Construction is not difficult, which is hardly surprising, as there are just 31 components. 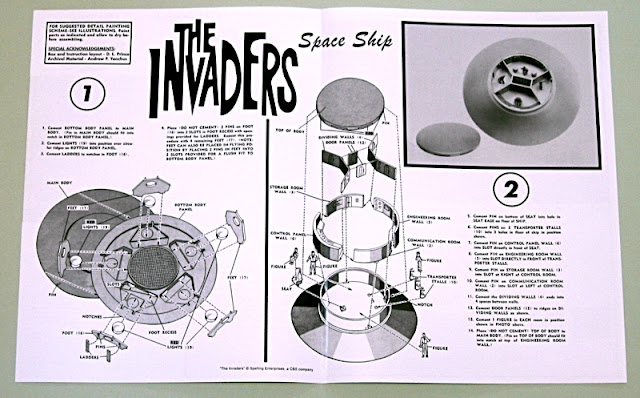 The instructions also include an introduction and reproduction (below) of the original Aurora sell-sheet. 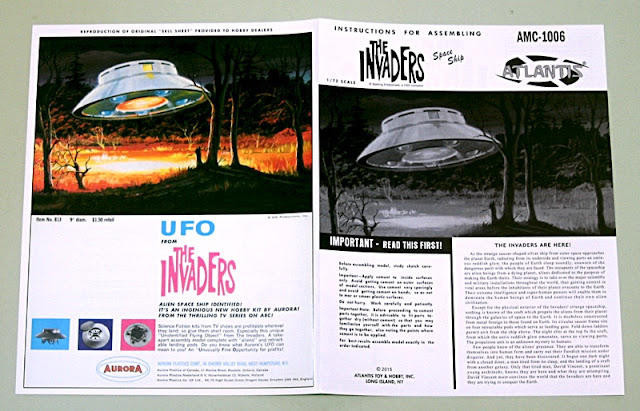 Three views (below) of an assembled and finished original Aurora kit. Here four grey-suited aliens discuss their plans to take over the Earth. 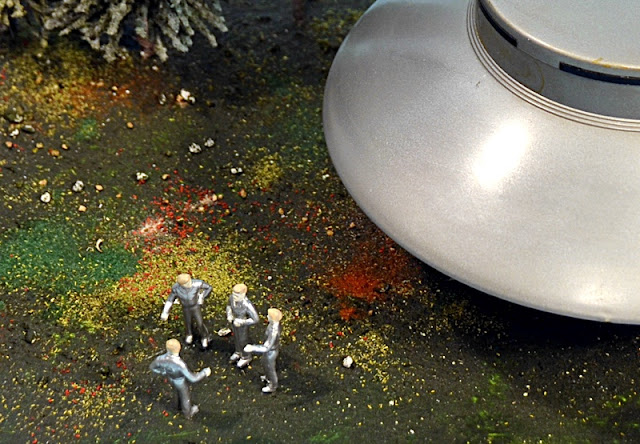 The UFO's unusual 'barn door' landing leg configuration is clearly shown (below) in this diorama scene. 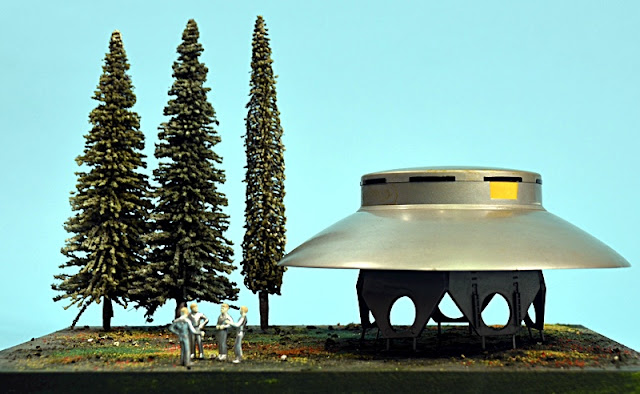 Is it an automobile hubcap or an alien flying machine? Your choice, but the diorama presentation gives the Atlantis model an authentic look. 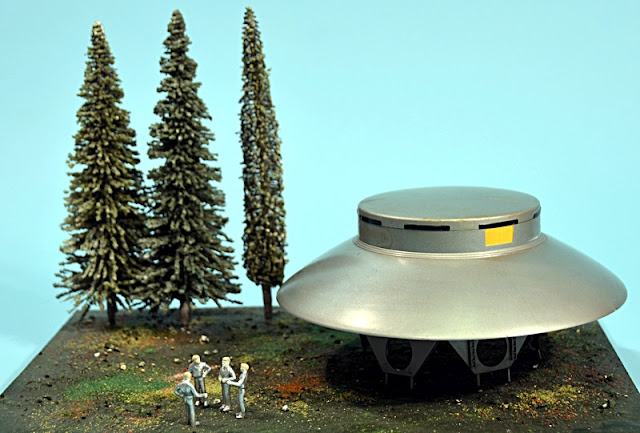 The interior (below) is neatly presented, and its appearance can be much improved by careful paintwork. The Invaders obviously have a taste for brightly coloured walls. 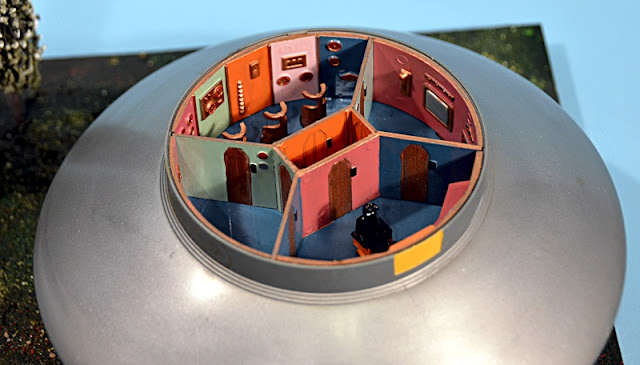 Under the circular hull are five mystery domes, the purpose of which has never been explained, though many UFOs seem to have them, often described as being part of the propulsion system. The Atlantis kit also includes five landing legs, which can be used extended for landing, or retracted for in-flight mode. The kit has only 31 parts, so all in all, that makes for a reasonably simple build.

UFO belly view (below) shows the quintet of power domes, here in transparent red, and retracted landing legs. Some weathering could improve things here, especially on the lower parts of the landing legs, which would dig into the soil of their forested target zone. 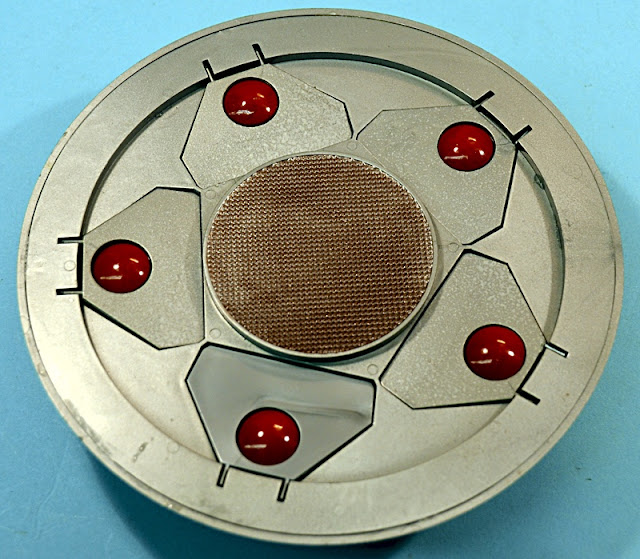 Kit history
The first issue was the original Aurora release, back in 1968. The kit was moulded almost entirely in silver styrene, except for two tops for the central section, one in opaque plastic, one in transparent. There were also seven figures included, though three of them were actually duplicates.

Aurora reissued the kit in 1975, not long before the company ceased trading. There was new box-art by well known artist, John Amendola, and although the kit was still moulded primarily in silver, you didn’t get the optional clear top, and ventral domes were supplied in transparent red. There were now 11 figures supplied, as the original seven were increased by the addition of the quartet from the Aurora Dick Tracy Space Coupe kit.

You also got the Space Coupe base, the only time this occurred. However this issue could have been slightly different as Andy reports when he was still at Aurora as one of the Project Managers, his idea regarding the figures was to leave out two original duplicates, and replace them with the Diet Smith and Moon Maid figures from the Dick Tracy kit, the reasoning being that Junior and Tracy would be too recognisable. 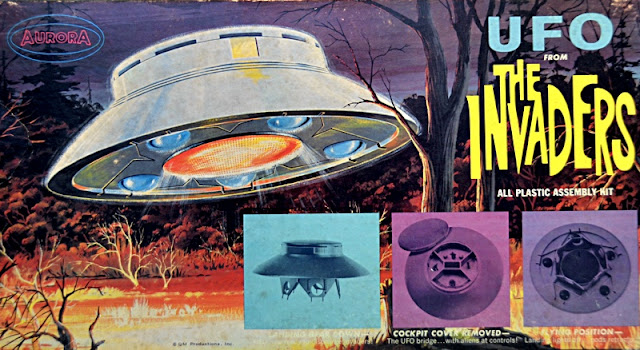 Box (below) for the second Aurora issue.

The first Monogram kit (below) was issued in 1979. 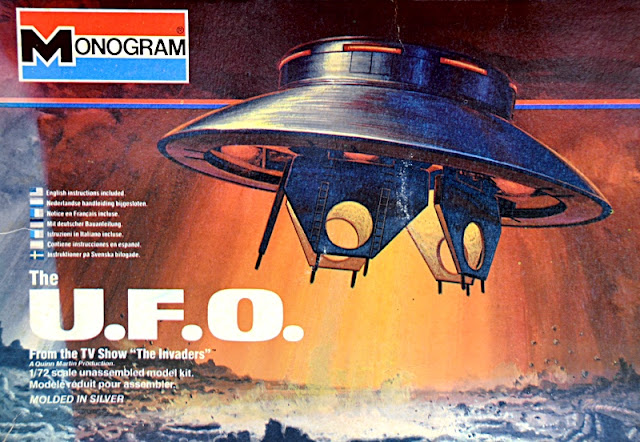 Comparison of the original Aurora boxtop (below left) with the somewhat larger Atlantis Models version.

The advertisement (below) for the original Aurora kit appeared in dozens of comics and magazines. 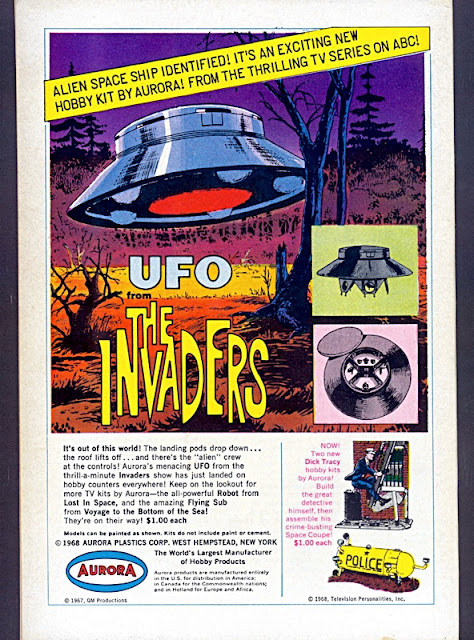 The way things turned out, Andy had left Aurora by the time the reissue was completed, so in the end both figure sets were included, to make the total of 11. Also, the name was changed from, ‘UFO from the Invaders’ to ‘Flying Saucer of The Invaders.’

The Aurora tooling was sold to Monogram in 1976, and three years later Monogram reissued the kit, using the same Amendola artwork on the box. However, the base was omitted, and the figure count went down to just four, with no the Dick Tracy figures. The underside domes were retained in transparent red, and the name was reinstated as, ‘UFO from The Invaders’. Monogram reissued the kit again 1996 and in 2003 as an SSP (Selected Subjects Program). In all cases, the plastic was the same, though the box first reduced The Invaders type size, then removed completely, simply using the title, ‘The UFO.’

Tsukuda in Japan also reissued the kit, as the company had a tie-in with Monogram.

This latest Atlantis kit is basically the same as the Monogram, though with the red domes now for the first time moulded in transparent plastic. The box is slightly larger, with artwork that returns to the first Aurora box style, though it has been completely re-done using artwork and photos from Andy’s collection. The instructions are the most comprehensive to date, and add the original Aurora sell sheet. This is printed in colour, so the plans have taken on a much more glossy appearance than before.

Summation
A welcome reissue not seen for nearly 40 years. It’s simple to build, but rates as another to add to the growing range of flying saucer kits from Atlantis Models. There are plenty of other UFO kits out there too, and it's worth having a look via our featured ads (above and below).