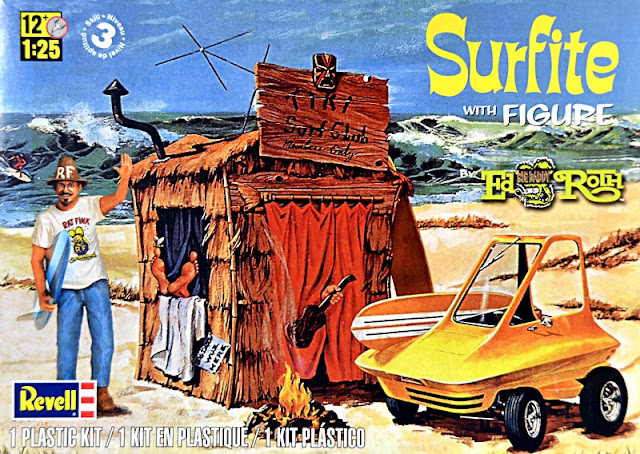 THE SURFITE IS A REISSUE OF one of Ed Roth’s smallest custom vehicles. Revell originally issued the 1:25 scale Surfite in the 1960s, and it has had just one reissue since. This was part of the SSP (Selected Subjects Program) Phase 4, Fall 1993, so even that was more than 20 years ago.

Mat Irvine reports: One intriguing thing about the Surfite is that it is powered not by Ed’s usual choice, a big American V8 (or in the case of his Mysterion, two V8s), but by the diminutive British BMC A-Series four-cylinder engine from a junked Austin Mini Cooper he found in a scrap yard.

The component layout (below) reveals that the Tiki Hut takes up almost half the parts. Without the hut, the Surfite would be a very small kit indeed. 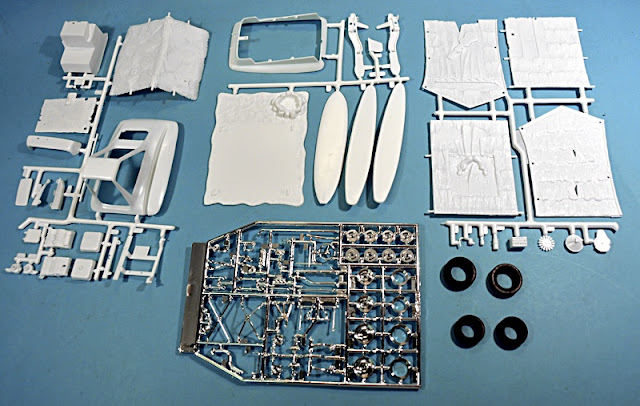 The Surfite kit provides the tiny A-seriesengine, complete with front-wheel drive set up, and the sub-frames, onto which the tiny body is fitted. Also, the whole purpose of the Surfite (not that Ed necessarily needed a reason) was to carry a surfboard, and so the kit supplies three of them, which you can see in the parts layout (above).

The decal sheet (below) has optional logos for Ed’s T-shirt, Surfite number plates, stripes for the boards, and the Tiki Hut signs - though frankly, these last are still better painted on. There are even flames to cut out for the small fire in front of the Hut. Note the decent instruction sheet, and new supplied scale figure. 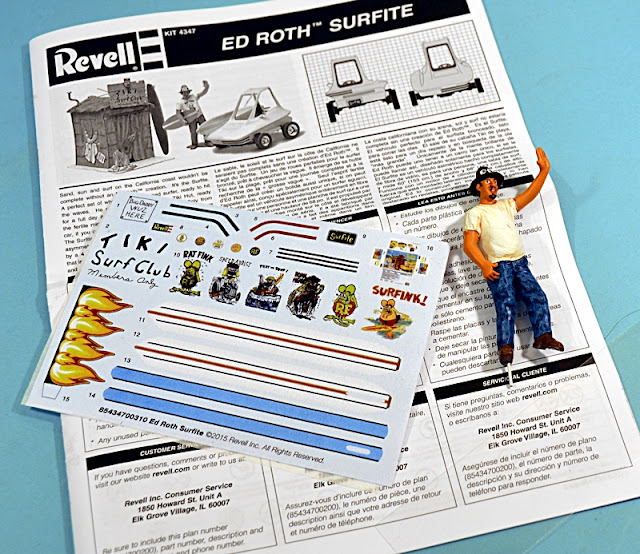 There’s a plus - and this is almost certainly because the Surfite alone would not be a very large kit - so you get the Tiki Hut (below) a suitably cool place to relax on the beach, out of the midday Californian sun. According to early reports, the hut was planned initially as a cardboard cut-out, in much the same way that Revell-Monogram produced Highway Scenes in later years. However, when the kit was released, the parts were in injected styrene.

I finished the Surfite (below) on a suitably sandy, diorama base. Unusually, a clear acetate sheet is supplied for the windshield but this is no bad thing. Clear injection styrene is usually too thick for window glass, so for the Surfite’s small flat screen, acetate is ideal. 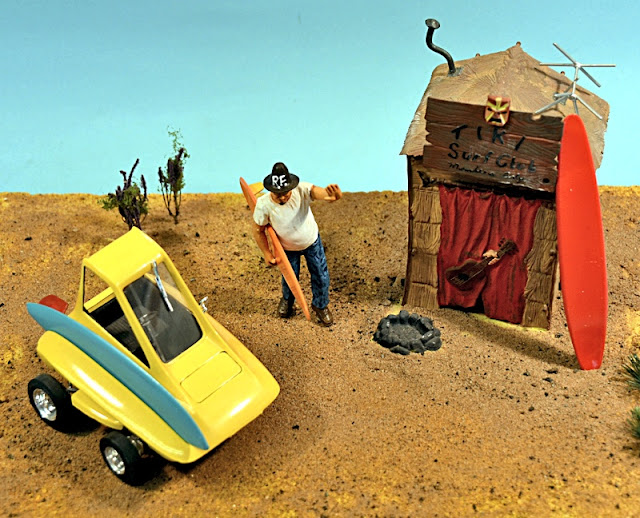 There’s more... this reissue has extras. The main one is a figure of ‘Big Daddy hisself’*, Ed Roth. The figure (above, below) is nicely pre-painted, though a slight correction to the eyes will help, as they don’t look quite right. The Big Daddy figure can also hold a surfboard, and for the first time a decal sheet comes in the box.


* SMN note : This is the way Ed usually spoke, and wrote. 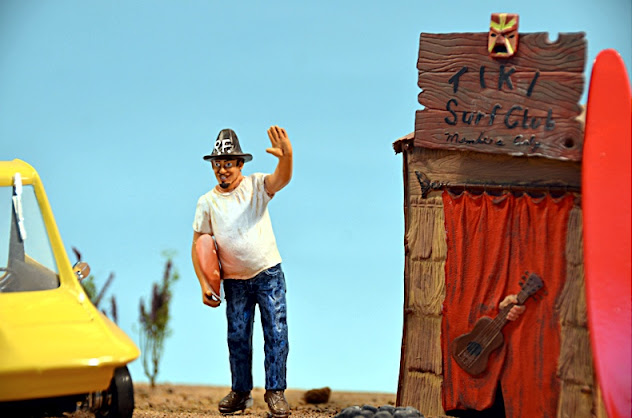 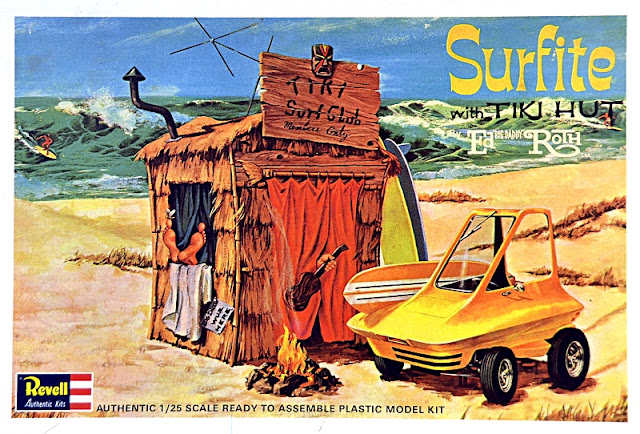 The original box (above) dates back to 1965. This one is actually an identical version, which was used for the SSP release in 1993. The SSP issue (below, lower) and latest box end panels shown for comparison. The original emphasises ‘with Tiki Hut’, the new one, ‘with Figure.’ 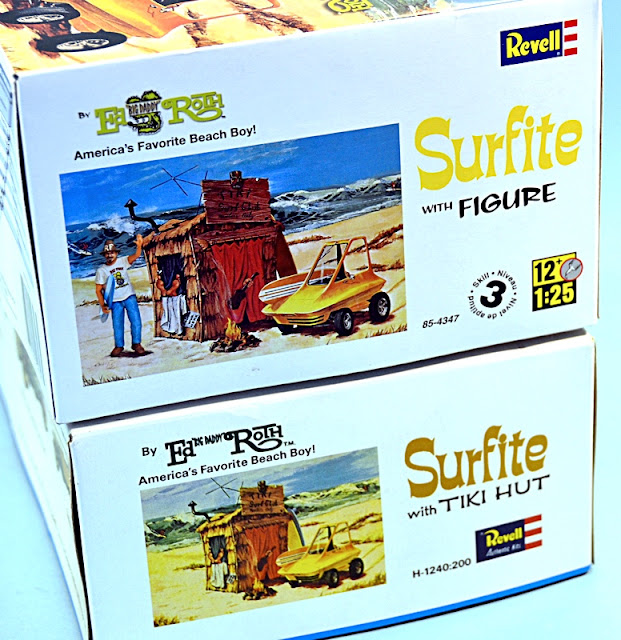 And the only mention that the Surfite could have been made to 1:12 scale? This is from the commercial buyers’ flyer (below) probably printed in late 1964 to show off the 1965 releases. Note the other five Roth cars mentioned had already been already released; only the Surfite was yet to come, and the underlined text claims, “It is our first car in 1/12 scale.” The blurb also mentions the Surfite’s potential appearance in the surfing movie Beach Blanket Bingo - but that’s another story! 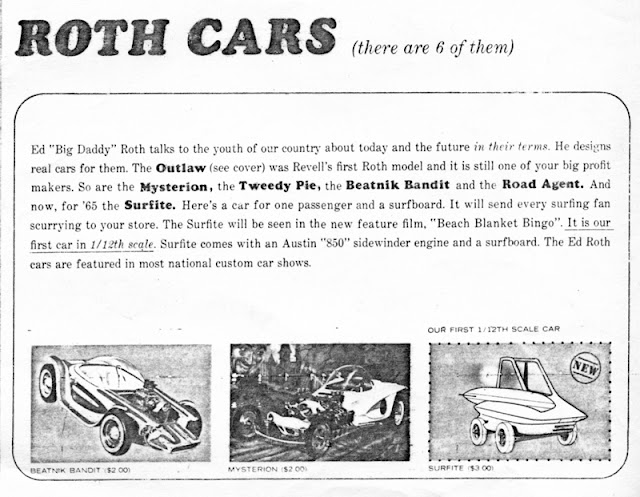 And one piece of information that is not widely known. Because of its small size, the Surfite kit was originally planned to be a 1:12 scale release.

But the Surfite name has never been explained - I reckon it’s short for, 'diminutive surfing vehicle.'