MUNSTERS OR MONSTERS? WE'LL TAKE BOTH WITH THIS 1:25 SCALE CHEVY TRUCK 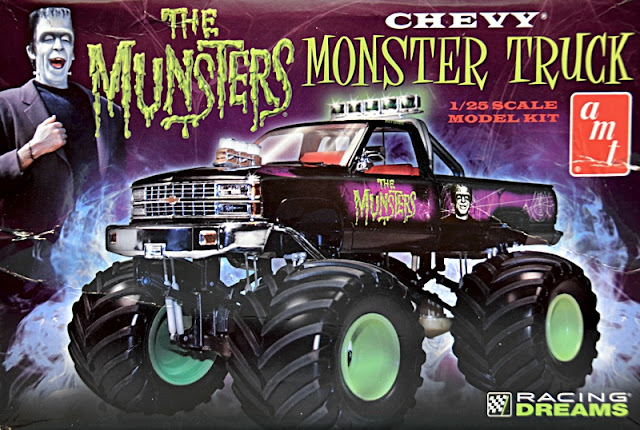 THE MUNSTERS CHEVY MONSTER TRUCK is a reissue of the existing AMT Chevy Monster Truck, but this time round, the kit is marketed as a vehicle supposedly used by The Munsters, the ghoulish family of a TV comedy series that first aired from 1964-66.


Mat Irvine reports: Real-life monster trucks take existing bodywork - usually a Chevrolet or Ford F-series - and plonk it on top of a dedicated chassis, with big engine, bigger axles and even bigger tyres. And this kit follows the same pattern, with parts and construction that are much the same as previous releases. 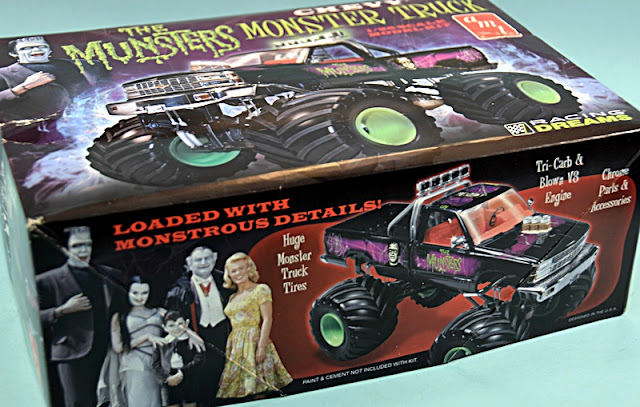 But of course this is a vehicle for Herman Munster, so it’s down to paint and the colourful supplied decal sheet to make the difference. Finishing the kit is helped by the useful closeup pictures on the chunky box sides. 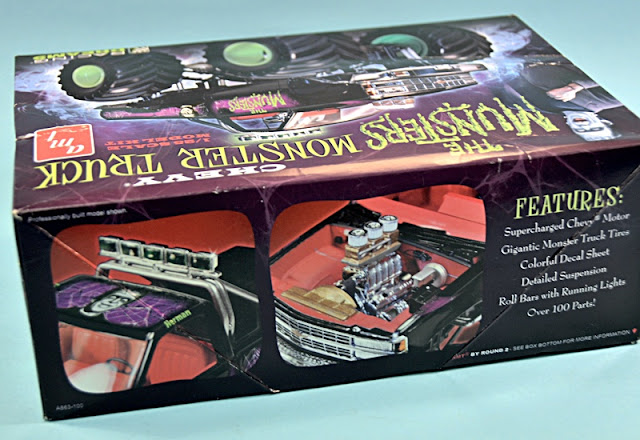 The components (below) are cleanly moulded, and go together without major fit and finish issues. 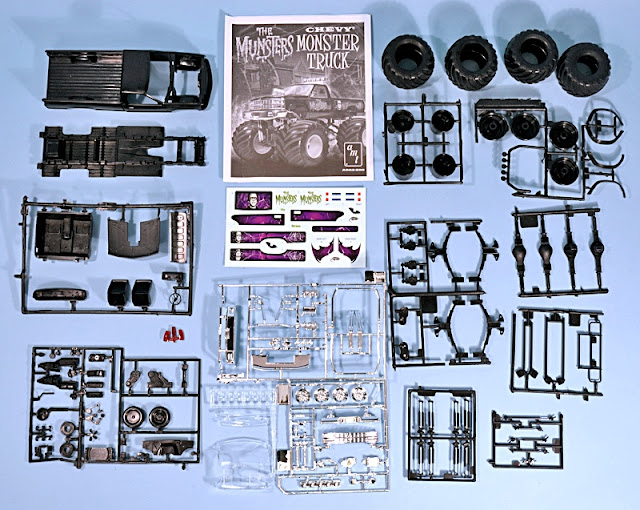 To match another, smaller kit, the AMT 1:25 scale Munster Koach, I made the primary body colour black. But I added a touch of funereal colour by using one of the new range of Humbrol acrylic sprays - in this case, Gloss Purple. I sprayed the engine, axles and wheels in this colour (though the box art shows the latter in green). I also used it for the interior, but topped off the seats with a matt varnish to better represent the appearance of the material.

Component sub-assemblies (below) ready for final fitting. Clockwise from front: the interior cocoon, chassis and engine, wheels and axles.

The Munsters have ‘gone racing’ before, which is why the Drag-U-La was introduced - it featured in the movie Munster Go Home. As far as we know, Herman never actually got behind the wheel of a monster truck, although it’s perfectly reasonable to assume he would, if given the chance. 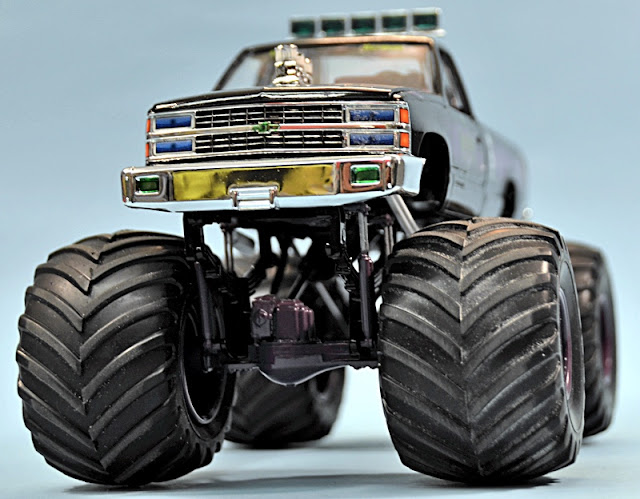 The fully assembled and finished truck (above, below) stands high on four  mega-size tyres, to create an impressive model. 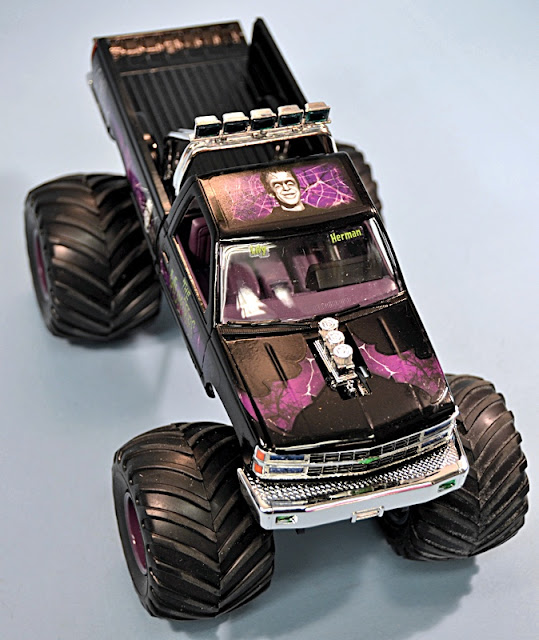 Because of the racing connection, I took the opportunity to add a Jimmy Flintstone figure that ‘slightly’ represents Herman in a leather jacket, even if it’s not officially named as such. The figure was really intended to go with the Munster Koach or Drag-U-La, but fits in with the Chevy Monster Truck just as neatly. 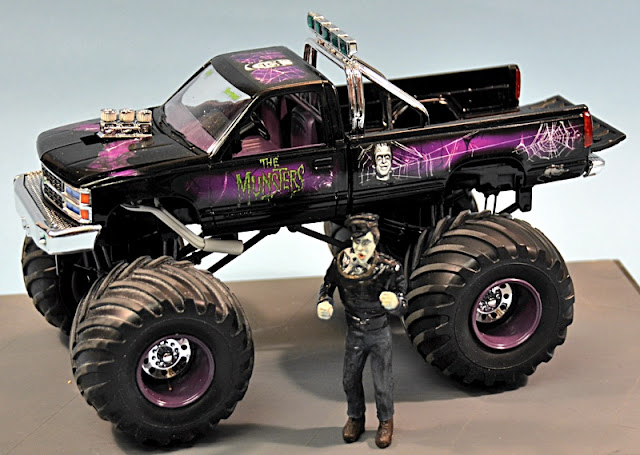 My Herman Munster (above, below) is depicted in a leather jacket, though the peaked hat gives him a somewhat raffish Village People look. 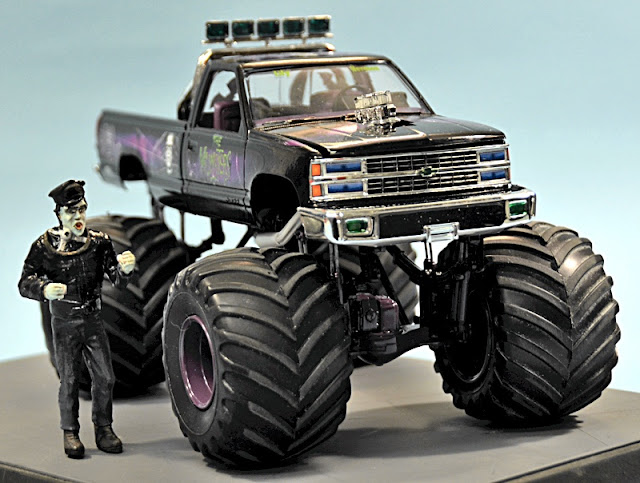 And how do Herman’s vehicles (below) compare? The AMT 1:25 Munster Koach is a fairly large model when assembled, but it’s utterly dwarfed by the Chevy Monster Truck. 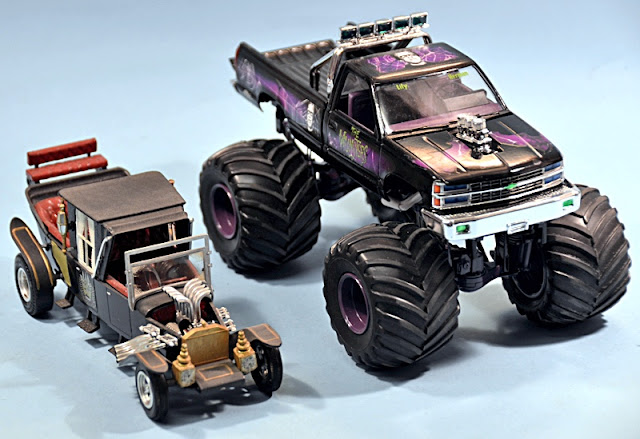 Summation
If you like The Munsters and have a thing for monster trucks, then this is an excellent 1:25 scale kit to go for. Adding the well sculpted Flintstone figure is an option that’s particularly useful if you like diorama scenes.