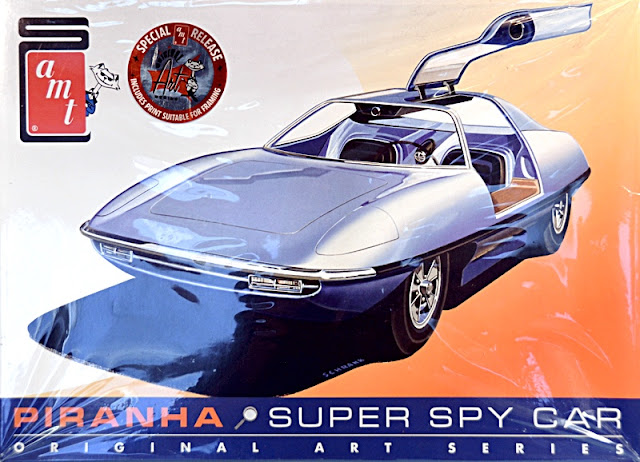 ROUND 2 MODELS HAS REISSUED A 1:25 SCALE AMT Piranha Super Spy car, though the box omits its heritage as The Man from U.N.C.L.E. car, with no mention either of the latest movie of the same name.


Mat Irvine: Even if not named as such, the Round 2 reissue was likely prompted by the movie release and at least there are no problems with copyright on the actual vehicle, as AMT not only made the kit, but built the full-size car as well.

The original kit, released as The Man From U.N.C.L.E. car, came out in 1967 and, apart from two connected issues, The Girl from U.N.C.L.E. and Mademoiselle L'Agente Secrete 97 (AMT’s own creation), that was it.

Although other model car companies, such as Revell and MPC, have sponsored racing cars, AMT is the only one to create both model kits and full-size cars. This was through the AMT Speed and Custom Division, based in Phoenix, Arizona, and run by famed customiser Gene Winfield.

So what’s this latest Round 2 release like? Firstly, there are two of them, the Special Release Original Art Series kit (above) and the Retro Deluxe Enhanced Reissue (below). 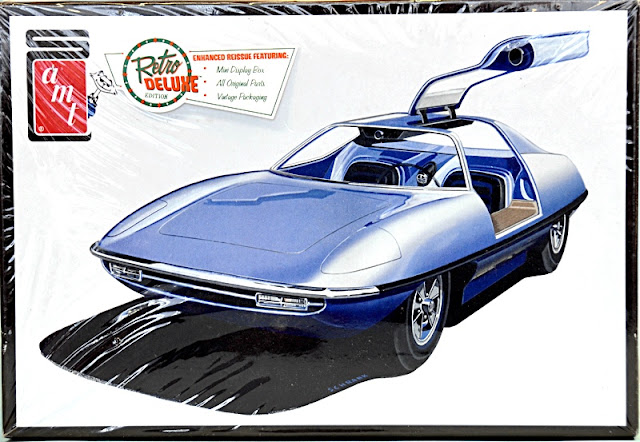 The Retro Deluxe version is moulded mostly in white styrene, with some components in transparent plastic, a red-tinted taillight item, and a chrome-plated runner. The parts are as those in the original kit, though Round 2 say they have retooled the windows and taillights. There is plenty of detail, including a multi-piece flat-six air-cooled Corvair engine, plus racing-type suspension and steering components.

Side of an original box (below, upper) shows the early U.N.C.L.E. connection. 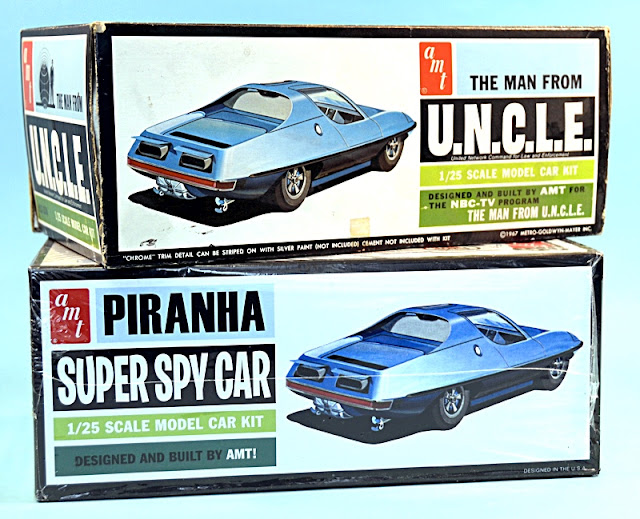 As the Piranha Super Spy car is actually the U.N.C.L.E. machine (with or without credits) you get all the secret agent gadgets. There are laser beams in the roof bar, a weapons panel behind the seats, a bulletproof windshield, guns in the front bumper, and rockets in the side door panels. There are even propeller shafts at the back for waterborne ops. There is no ejection seat, but otherwise this car combines in one vehicle most of the goodies that the infamous Q distributed amongst several cars driven by Agent 007.

Parts layout for the Special Release Original Art Series edition (below) shows the included booklet. Many of the decal markings are the same as those provided in the AMT Piranha dragster, another kit of that era. 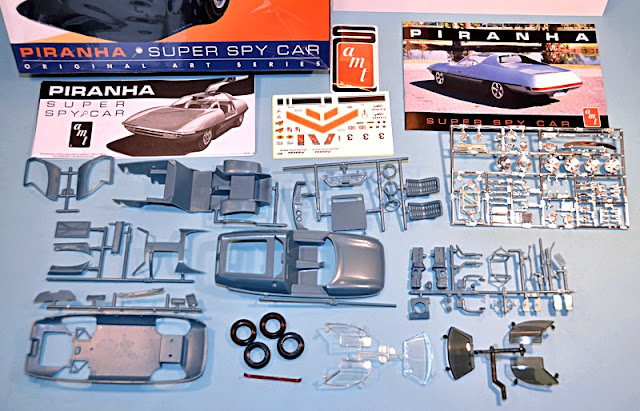 The Original Art Series kit comes in a larger box, and is moulded in blue, approximating the colour of the full-size U.N.C.L.E. car. Two sets of transparent parts are supplied, tinted and clear. The tyres are very neatly pre-printed with thin redwalls on one side, Goodyear letters and bluewalls on the other. You also get a large frameable print of the box art, and a six-page booklet, with some usefully detailed images of the full-size cars, including interior shots.

Both versions of the Piranha are nicely moulded, with no particular fit or finish problems. Assembly should be a breeze, esepcially if you are used to making car kits. There are 107 components, though the finished model is on the small side, measuring just 160 mm (6.25 in) from nose to tail. 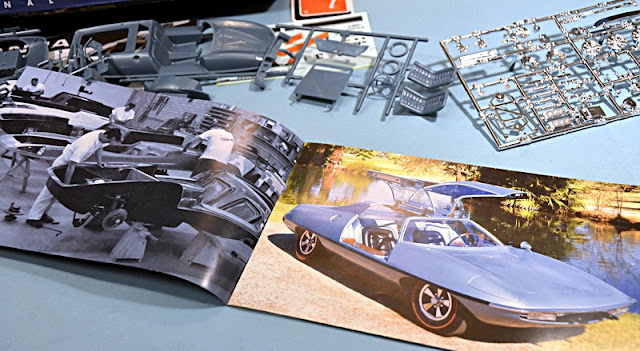 The booklet (above, below) includes some very useful reference photographs. 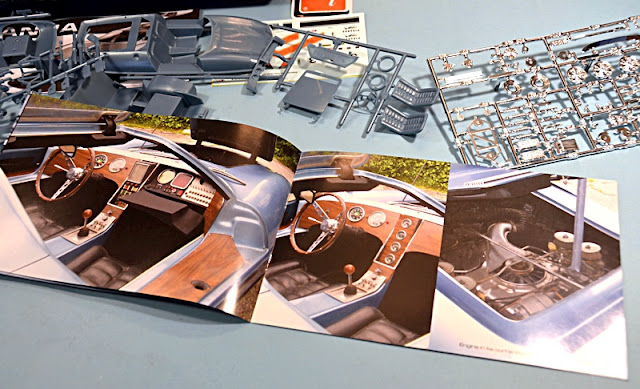 The pictures (below) show my buildup of a first release. I added the base later, and I think even now that as the Piranha is not a large model, the car could really do with some scale figures to set it off properly. 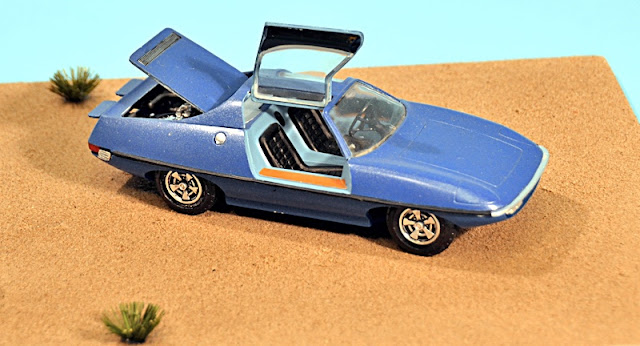 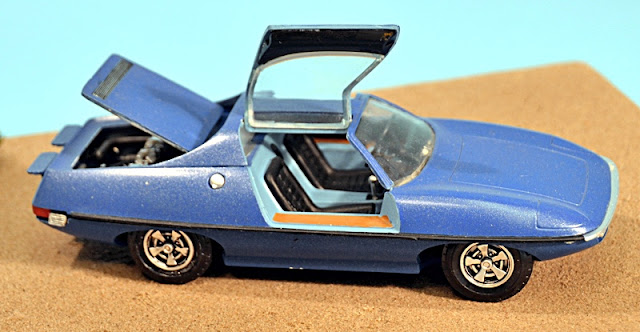 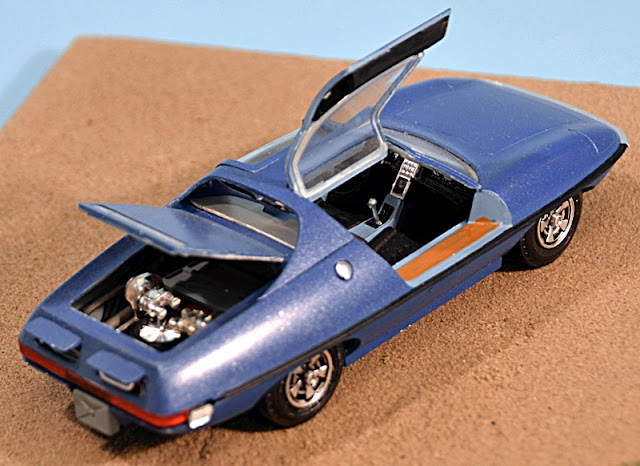 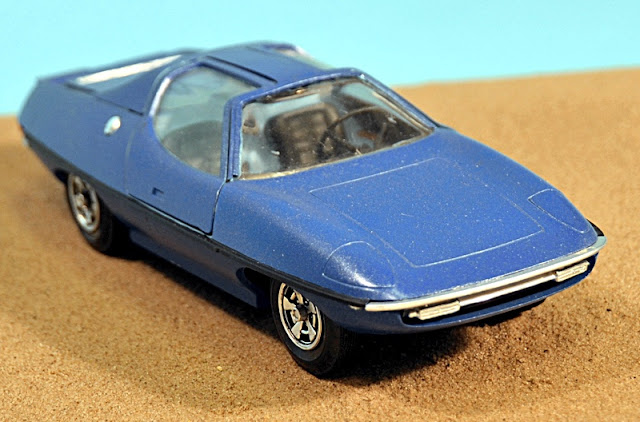 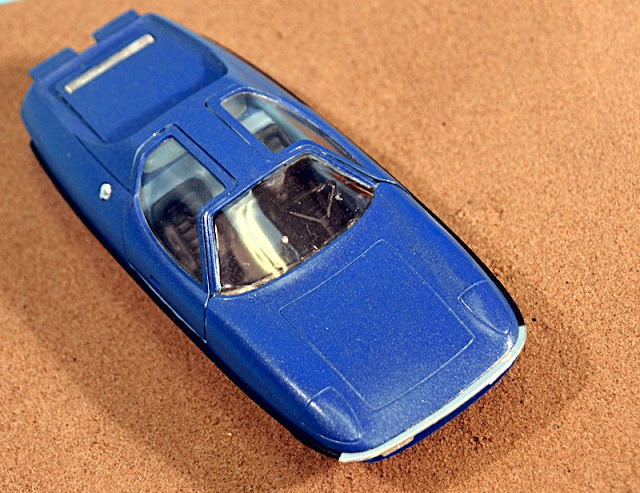 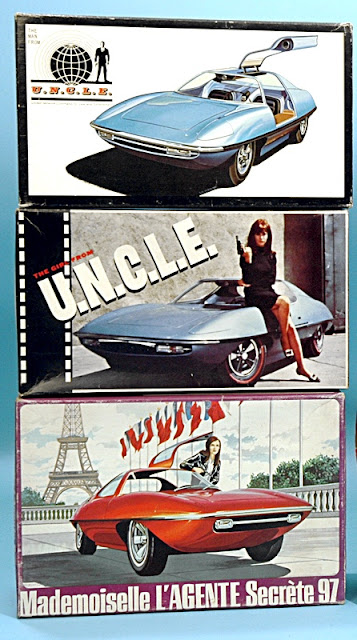 The Back Story
If that sorts out the AMT kits, the origin of this car kit is slightly more convoluted, as it didn’t start with AMT at all. Instead, it began as a project by the Marbon Chemical division of Borg-Warner, to promote the use of Cycolac ABS plastic for automobile structures.

Cycolac was different to GRP - glass-reinforced plastic, or fibreglass - that was in use, for example, to make Corvette bodies in the US, and Lotus and Reliant products in the UK. But with GRP each body had to be laid up primarily by hand, whereas Cycolac ABS could be moulded like a (very large) model kit.

Various CRV (Cycolac Research Vehicle) prototypes were built by the racing car specialist, Centaur Engineering, with moulded top and bottom body sections, basically as used in the kit. The CRV I series had a Hillman Imp engine, while the CRV II had a Corvair engine. In this form, they raced against competition names that included Austin-Healey, Jaguar, and Triumph.

After this came a roadgoing coupe, the CRV-IV (the CRV III was a crash-test vehicle) at which point AMT entered things and decided to manufacture a production version, giving it the name Piranha. However, sales did not match expectations, not helped by General Motors cancelling the Corvair and its engine. After building no more than about four cars, AMT’s venture ended.

The story then shifts to Gene Winfield, who was approached by the producers of a new TV series, called The Man from U.N.C.L.E., wanting suitable transportation for the stars of the show. Initially they had contemplated a Dodge Charger, but a non-commercial vehicle was reckoned to be a better fit for the series concept. So Winfield extended the Piranha’s body by 330 mm (13 in), lengthened the roof line, and added gull-wing doors. Then he added the gadgets thought suitable for use by the Man - or the Girl - from U.N.C.L.E.

Full details on the Piranha's history can be found at Nicholas Whitlow’s site.

And finally: The 2015 The Man From U.N.C.L.E. movie was reviewed in The Times by Kate Muir. She approved of the film, but added, “Classic car fans will mourn the absence of the original blue AMT Piranha sports car with gull-wing doors.”

SMN note: U.N.C.L.E. is an acronym devised for the original TV series that aired from 1964-68, the letters standing for United Network Command for Law and Enforcement.