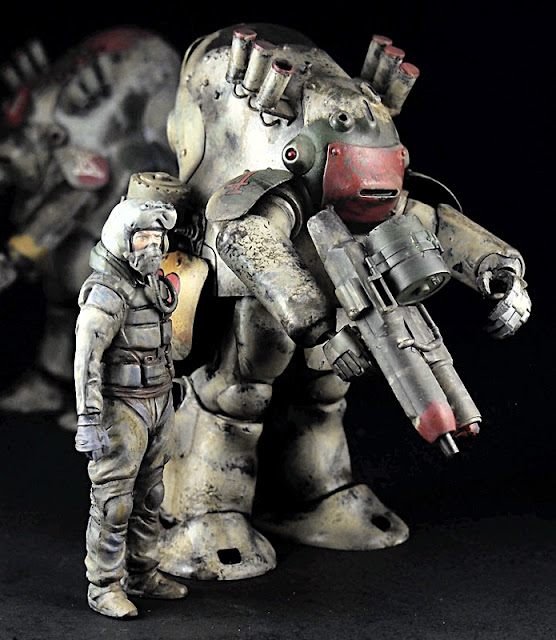 MASCHINEN KRIEGER, Ma.K FOR SHORT, IS A LONG running Japanese sci-fi saga of the future. Hasegawa regularly releases kits based on the Ma.K combat universe, such as this Type MK44 robotic power suit to 1:20 scale.

This particular kit rejoices in the title, Robot Battle V Maschinen Krieger 44 Type MK44 Limited Edition. Kinda long-winded, but it looks great when assembled and fully finished, which is the important thing.

Weathering fans can look forward to plenty of satisfying work, as the MK44 is a subject that really benefits from the application of grime, oil, dirt. Do all that and you get the tired look of hard working combat gear in a war-torn world of the future. 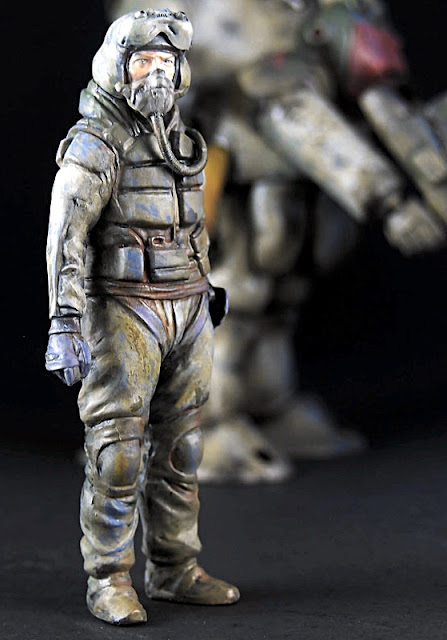 Logo (below) is applied across the range. 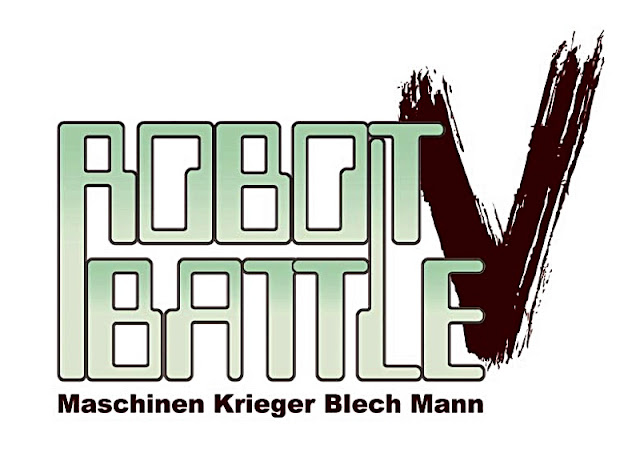 This should give you a taste for the future-noir plotline of these kits: "In the dark, futuristic world of Machinen Krieger, most of Earth's population was burned to ash by World War IV. As life returns, war erupts. The power-suited soldiers of the IMA struggle against the roving robots of the SDR. Innovation and adaptation is the key to the IMA's victory. New to the field are a sophisticated smartgun and a fixed arm gun - perfect for blowing apart mindless SDR constructs at maximum range." 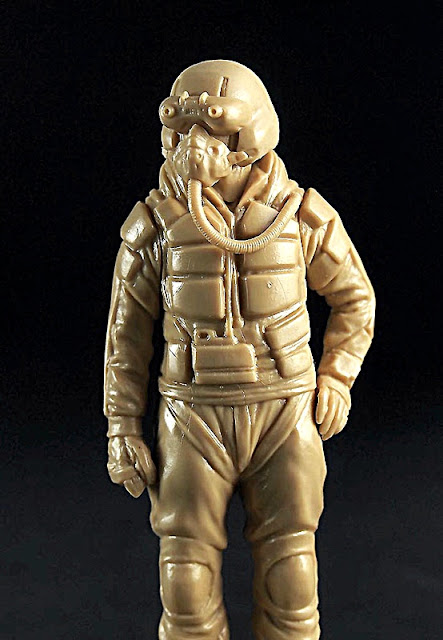 The other supplied figure (below) looks broodily ready for duty, less oxygen mask and with goggles flipped up. 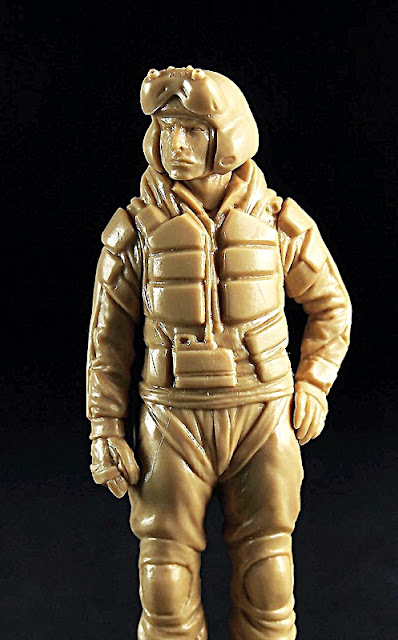 Figure and suit (below) painted and displayed. Even to biggish 1:20 scale, the finished model is not a huge one, the robotic power suit standing some 129 mm (5.08 in) high. Despite this, there is plenty of work involved in completing the kit, as there are 193 components to put together.

The man behind the whole Ma. K thing is Kow Yokoyama, whose homepage is here, where there is plenty of interesting stuff. It's in Japanese, so non-linguists be prepared to use translation software. It's definitely worth a visit though.

There are several different types of MK44, and the interior detail in this Ammo Knight kit is nicely done, allowing plenty of opportunities for the perfectionist to turn the suit's control centre into a fairyland of gleaming dials, switches, and instruments. LED lighting could also be added for a final touch. 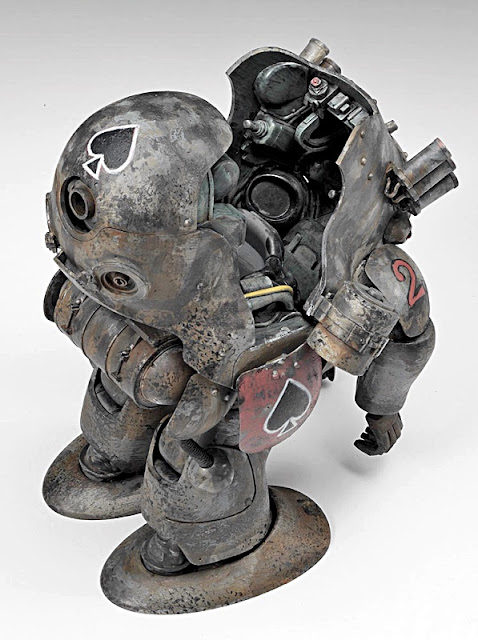 Handsome box design is a characteristic of the Ma.K series, the two packs (below) being typical of the genre. Decent photography and art are standard across the range. 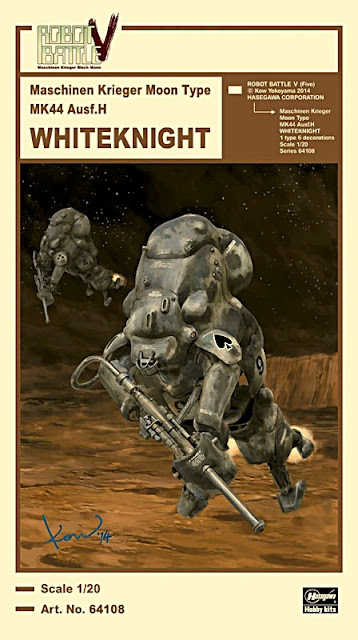 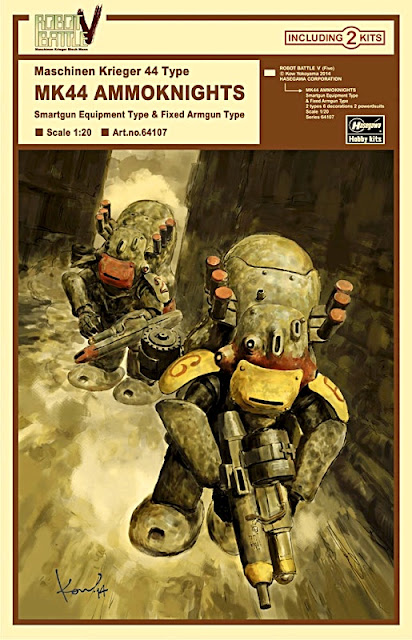 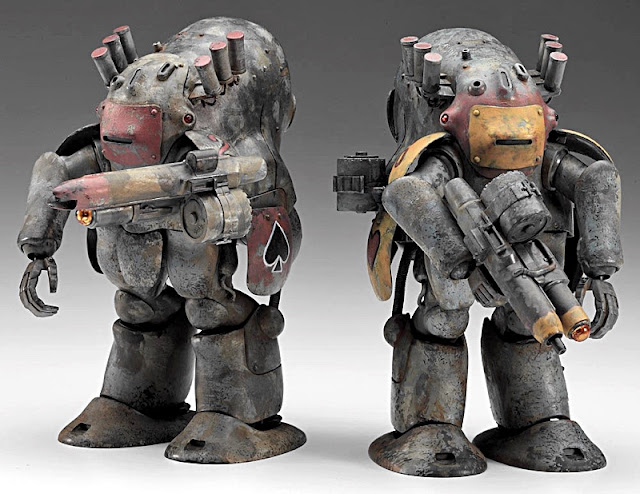