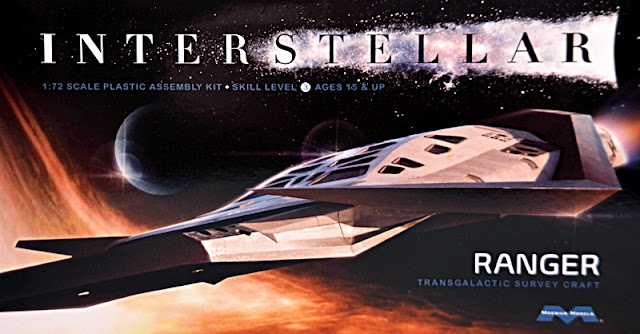 THE RANGER TRANSGALACTIC Survey Craft featured in the 2014 science fiction movie, Interstellar. And now here is a 1:72 scale kit of this spacecraft, from Moebius Models.


Mat Irvine: The Ranger Transgalactic Survey Craft that appeared in Interstellar was - perhaps unusually in these days of CGI - primarily an old-style movie miniature, even if the biggest Ranger model was 14 m (46 ft) long, not far short of its fictional actual size.

In the movie, the Ranger is capable of landing on and lifting off directly from planetary surfaces, and to reflect this, the Moebius kit has a four-point landing gear included, in lowered position.

In common with many recent models, the box base (below) is used for added background information. 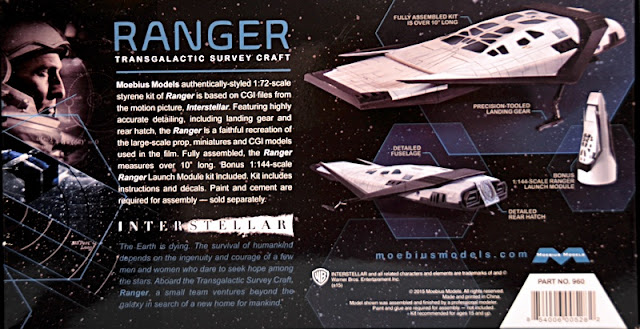 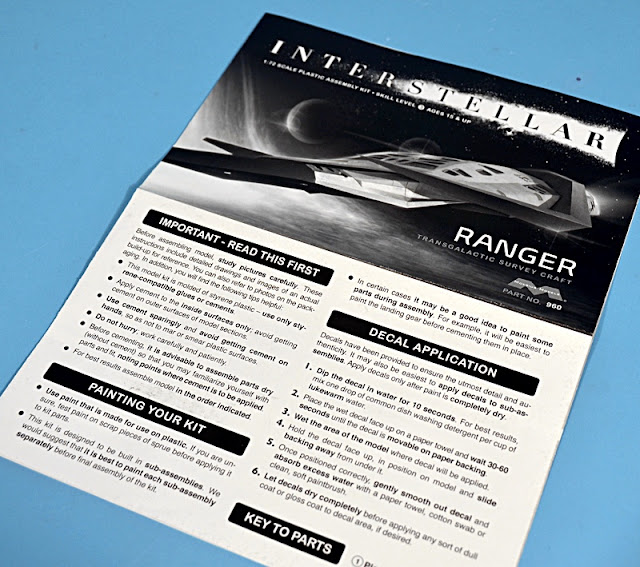 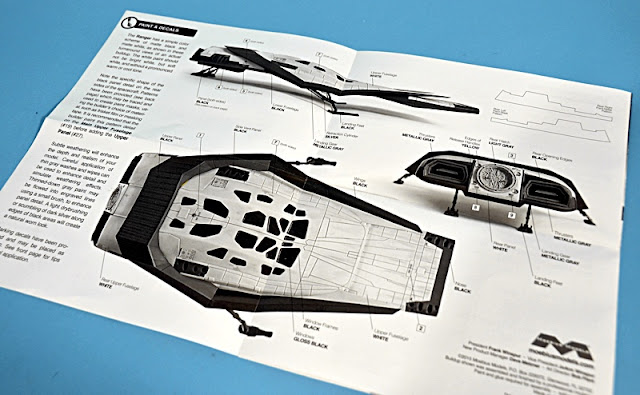 Construction from the 40 components (below) is relatively straightforward, but the paint scheme dictates that the upper panel-stubby wing structure has to be left off initially, as it is primarily black, whereas the hull itself is white on top, black underneath. 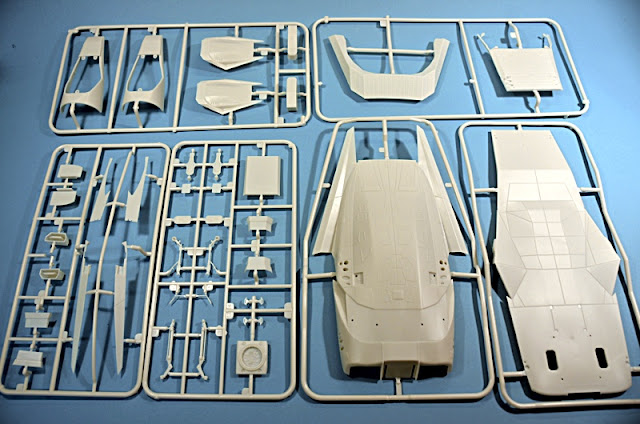 The rear pair of landing legs need to go in first as their retraction bays have to fit into the lower hull plate before the top and bottom are joined together. This leaves the legs exposed while this work is going on, and they are somewhat fragile - so take care at this stage of the build.

The forward landing legs can remain until last, but then they need to be very firmly cemented in place, though the plans make this clear. If you aren’t thorough about this, the Ranger will sink ignominiously when you try and place it on its feet.

Most of the work in this kit goes into the painting and finishing. The 22 windows are not supplied as separate transparencies, instead being moulded as depressions in the Ranger’s structure. Both windows and frames are nominally black, but look best with frames painted metallic black, windows in gloss black.

Careful masking (below) is essential with this kit. Here, the main hull top has been sprayed white, and is being masked so the windows can be painted. The main tape I used is from Tamiya, which does the job very well for the details, though I used more general masking tape to cover larger areas. 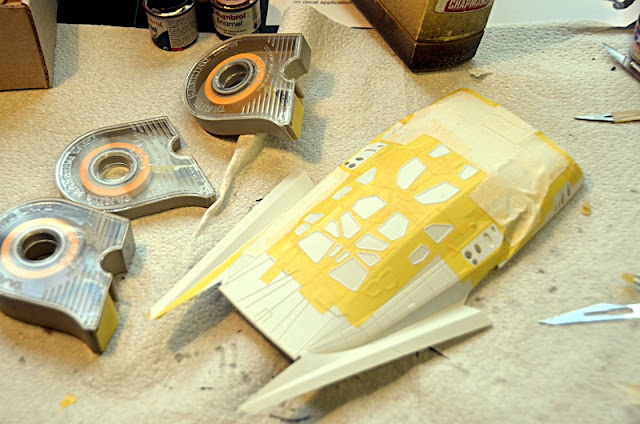 I primed the whole craft in Humbrol Matt White, then sprayed over with Humbrol Gloss White, though this has a more satin finish than high gloss. I then masked off the upper hull, leaving the  window frames to be sprayed with Humbrol Metallic Black, with the glass areas hand-painted with a thinned-out gloss-black wash.

After the black paint was dry, I started to remove the masking materials (below). 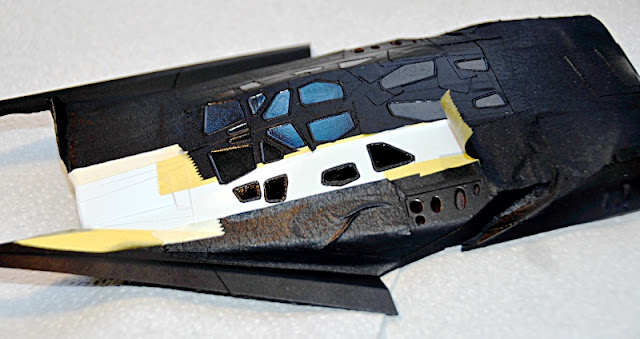 And here's the Ranger (below) looking good after all the masking was removed. 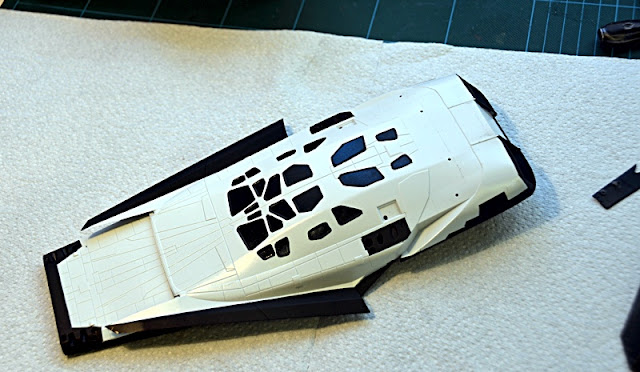 The thruster areas fore and aft are black, and the airlock at the rear, light grey. That is about it colour-wise, the fun then being in the weathering or dirtying down. Here I used dry-brushing, with a touch of paint on the brush, most of it then wiped away. I added texture to the ribbing and edges using Humbrol Aluminium (56), while Antique Bronze (171) worked on the thrusters, I used a 2B pencil for added emphasis to the panel lines. Lastly, I added smudges in places to break up the surface.

A few small decals are provided in the kit. These added some final details, after which I gave the craft a dusting of Testors Flat Varnish to pull it all together. 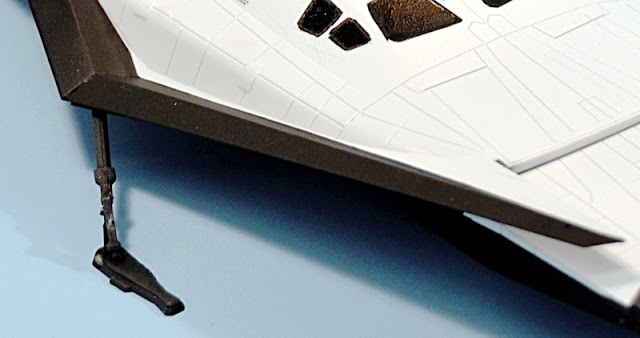 The assembled Ranger, here shown (above, below) in pristine just-painted condition, before weathering and dirtying down. 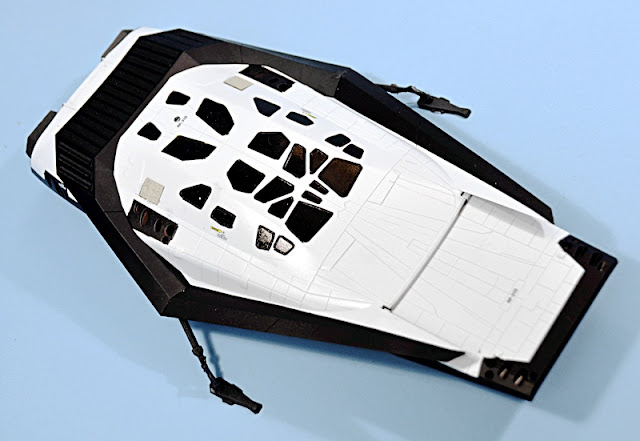 Subtle weathering has been added (above, below). 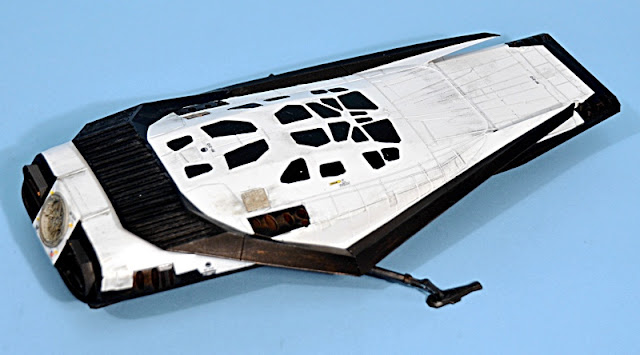 The ventral surfaces (below) also benefit from plenty of subtle weathering.

Finally, I added a suitable base for display purposes. Ranger came down on water and snow worlds, so you can take your pick. I chose to model a square section of the latter (below). 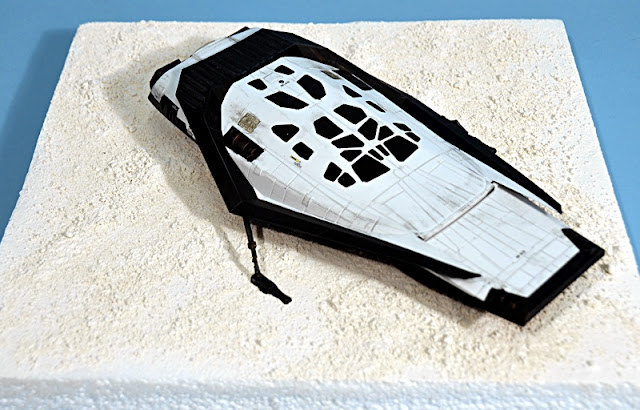 But that’s not all from Moebius, for the kit includes a bonus: two 1:144 scale Rangers with launch module, itself intended to fit on top of a 1:144 scale Saturn V launcher. Airfix and Monogram make kits of the Saturn V, so choose which manufacturer you prefer. 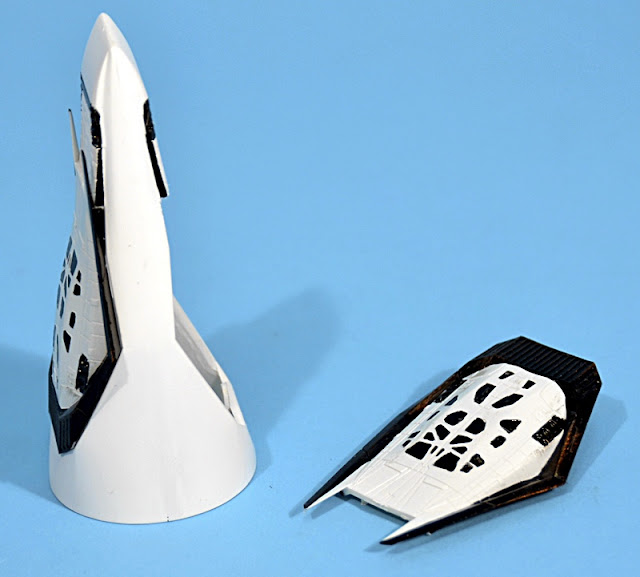 The two 1:144 scale Transgalactic Survey Craft fit snugly into either side of the supplied launch module  (below). 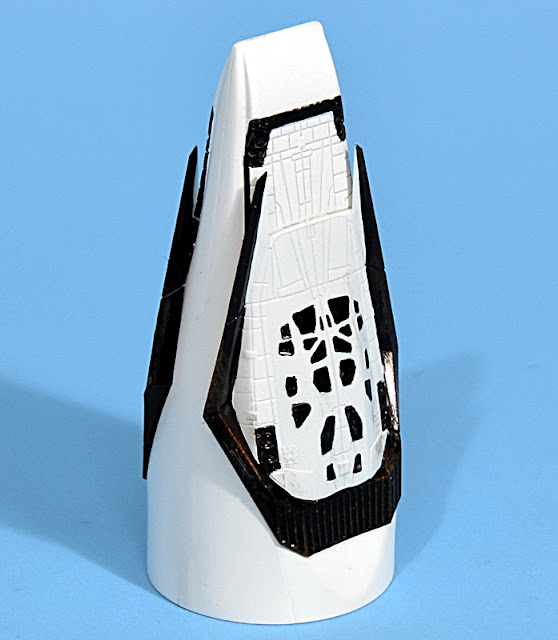 In the movie, the launch rocket is more implied that actually seen. There is a brief glimpse of the Ranger module, on what looks like the S-IVB stage of an Apollo launcher, but that’s about it - everything else is inferred.

The module can sit atop a 1:144 scale Saturn V (below) instead of the Apollo. This is the Airfix version, though the Monogram - most recently issued as a Revell kit - works just as well. 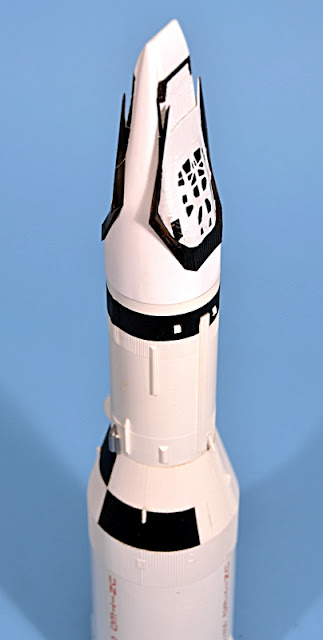 On a technical note, Interstellar was shot on film - both 35 mm and IMAX 70 mm - and was released in that medium in some cinemas that could still project film.

SMN note: The movie didn't explain why Ranger needed a huge booster to leave the Earth, when it didn't need one to take off from exo-planets. Oh well, that’s Hollywood scripting for you.