SMALLEST MODEL KIT EVER MADE? A NEW CONTENDER WITH THE 1:144 SCALE SPACE CRUISER FROM FREIGHTDOG MODELS 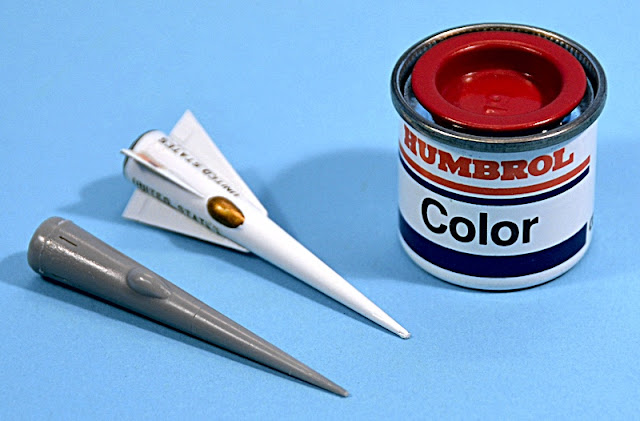 SOME TIME AGO WE POSED the question, “What is the smallest model kit ever made?” We came up with an answer in the form of the tiny two-part Nike Hercules missile included as a ‘Revell kit’ in the My Merry Hobby Shop children's play set.


Mat Irvine: But the Nike Hercules (below) had two problems: firstly, it wasn’t actually a Revell kit, as it just used the logo. And secondly, it was part of the goods on display in My Merry Hobby Shop, so it was really more of a toy than a true model kit. 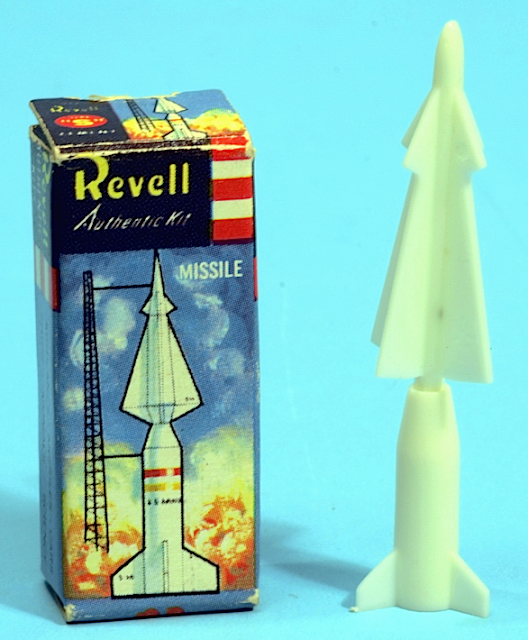 However, there is now a new contender for the smallest kit title. British garage company Freightdog Models has produced the Space Cruiser proposed Space Shuttle carried deniable weapon (below). And it really is tiny, as the assembled model measures just 55 mm (2.17 in) from nose to tail.

The Freightdog Models Space Cruiser is packed in a small plastic bag (below) which holds the five components. There are no supplied instructions, but with only a few components this is not an issue. 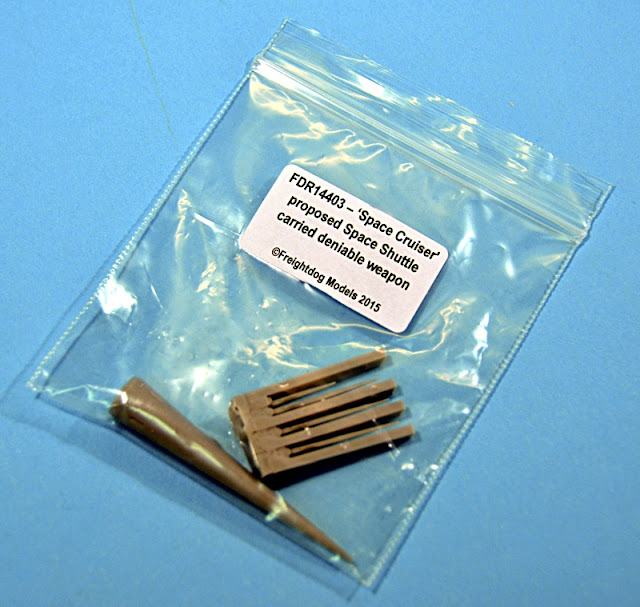 The Freightdog Space Cruiser (above, below) is comprised of just five finely-cast resin parts. There is one fuselage component, plus four fins - three long and one short. Construction consists of carefully removing the fins from the runner, then using superglue to fix them into locating slots around the aft of the fuselage. That’s it for the build, the only other thing being to decide what colours and markings to apply. 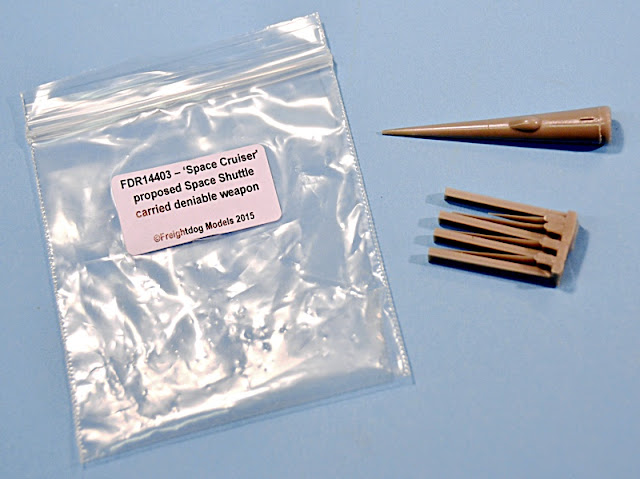 The Humbrol tinlet (below) gives a real sense of scale to this tiny wonder. I built two of them, and painted one in standard spacecraft white, the other in a black stealth finish. The white Space Cruiser received a tiny stars and stripes flag from the spare-decal box, and United States lettering from the same source.

The bubble canopies I finished in gold, to represent the same tint used for spacesuit helmet visors. I used lengths of stiff wire poked up the tail nozzles, joined at the other end to an L-shaped display base that I constructed for the tiny duo.

Two Freightdog Space Cruisers (below) one finished in black, one white, and both fitted to my scratch-built base. 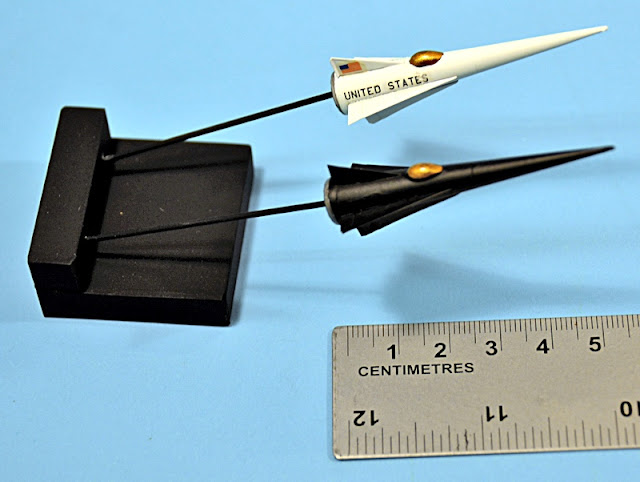 There’s no actual suggestion from Freightdog Models on how to display the Space Cruiser, though scratch-building a custom cradle to fit inside a Space Shuttle cargo bay could be a very interesting option. My simple stand was just for showing the two Space Cruisers in flight mode. 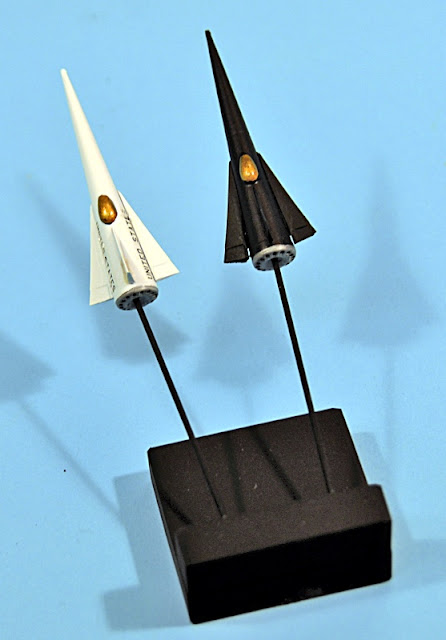 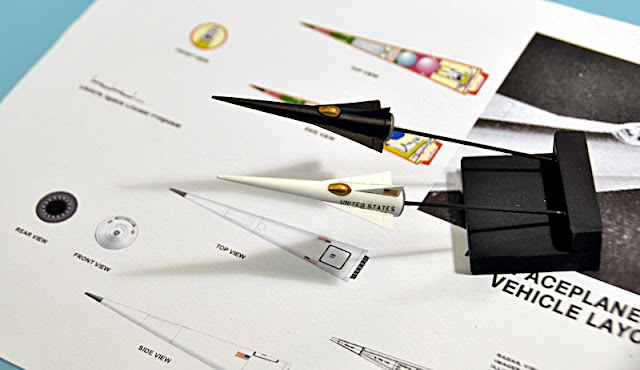 Backstory
The proposal for a single-seat spacecraft first came about in the 1970s, when US Navy researchers were exploring ways to attack Soviet spy satellites, which were then becoming an important part of the Cold War technology race. However the US Navy design was envisaged as a submarine-launched craft. The Space Cruiser was a different beast altogether, and came a decade later.

An artist’s impression (below) of how the craft might have appeared during orbital operations.

One plan was for the Space Cruiser to be launched atop a MX Peacekeeper missile, in a similar manner to Mercury or Gemini launches from earlier years. Another idea was for one or more to be carried to orbit in a Space Shuttle cargo bay, when the Space Cruiser could be released to search and destroy those enemy satellites.

A cross-section diagram of the original concept (below) shows plenty of equipment - as well as the pilot - packed into a small internal volume. 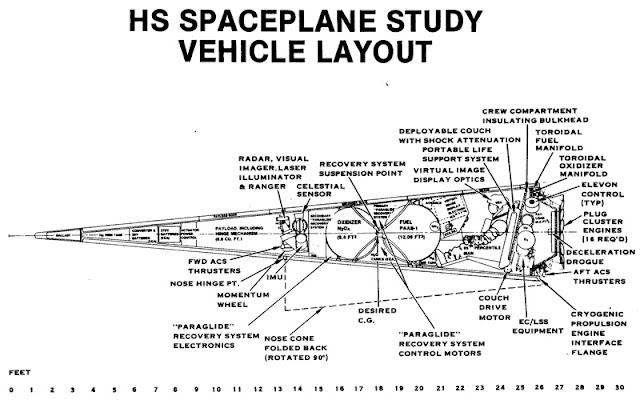 The ‘deniable’ tag came about as the Space Cruiser’s small radar profile meant that it could perform clandestine tasks while - in theory - remaining undetected. Hence my logical choice of a black finish. Another version could carry out research - perhaps even as an X-Plane - so the white finish with national markings would be appropriate.

Summation
An interesting little kit of a Cold War era concept, though references differ as to whether the fins should be there or not - but they do make the model more interesting to look at. Whatever, the Freightdog Space Cruiser manages to (just) take the ’smallest kit’ title away from that Nike Hercules.

Thanks to Freightdog Models for the review kits.