PROJECT VANGUARD WAS THE FIRST US space launch programme. Now Round 2 has released the 1958 Hawk kit of this most important pioneer of spaceflight’s early years.


Mat Irvine: First a declaration - I was consultant on the reissue of this 67 year-old kit, and wrote reference notes for the instruction sheet.

Space kits can be split into three basic types - launch rockets, crewed spacecraft, and uncrewed satellites. Until my book Creating Space was published in 2002, available kits for the first and second categories were pretty numerous (comparatively, as I am not talking aircraft, tanks or cars here), but the number for the third was easy to remember. There were just three, one of these being this 1958 release, the Hawk Project Vanguard Satellite.

The new box was created in part by digitally scanning my original Hawk box top (below, upper). 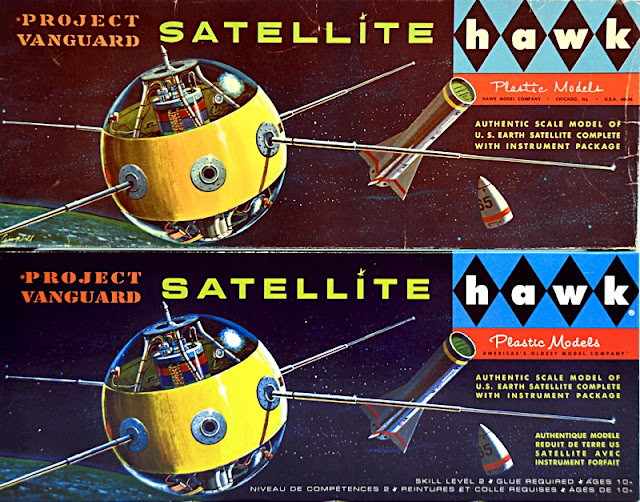 In the words of Round 2, the company that owns the Hawk brand, “This classic kit from the Hawk models tooling vault presents an early speculative look at the satellite. It features opaque and clear parts along with decals to label every aspect of the exploratory craft.”

The reissued kit is sold in cellophane shrink-wrap, with added info (below) on attached stickers. 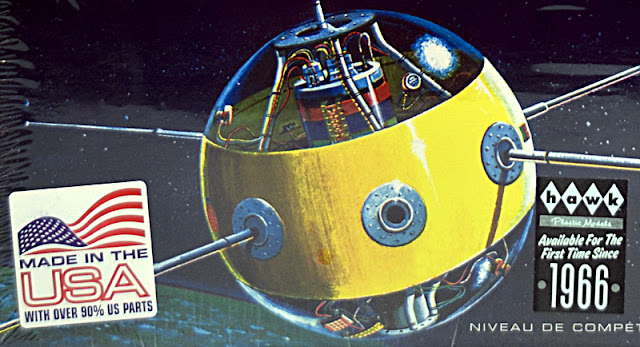 The Hawk kit represents the Vanguard 2 satellite, rather than the grapefruit-sized Vanguard I. Vanguard 2 was an aluminium sphere 510 mm (20 in) in diameter, inside which were fitted a variety of experiment packages. In the Hawk kit, the sphere is assembled from four plastic sections, two opaque and two transparent.

I wrote an information panel (below) for the box base, which supplies background details.

Vanguard 2’s centre section was an instrument module, which carried experiments, batteries, and an early form of computer, termed a Data Coding Device, to store information during each orbit, then releasing it for transmission to Earth, via four antennas. Kit maker Hawk did a good job in supplying just about everything it could for the interior, the clear sections being a necessary modelling extra, without which none of the interior details can be seen.

The 27 components (below) are moulded in light grey, with two transparent parts for the sphere, three for the stand. The kit supplies decals which were not on the real thing, so if you include these, the result is more of an educational display version, no bad thing at all. 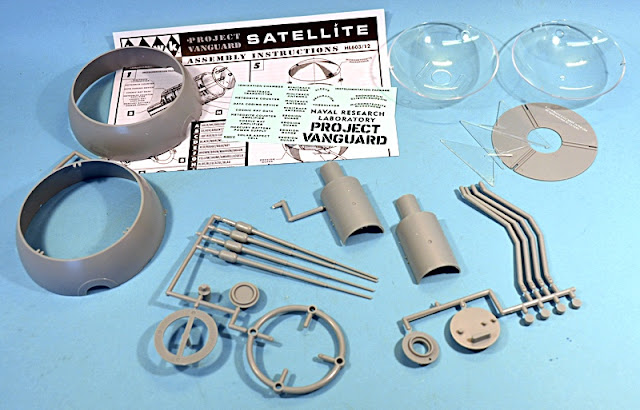 One thing that was not corrected with the new kit is that the instructions and box art depict the satellite in a yellowish-gold colour. In fact, the exterior of sphere was aluminized, a highly-reflective finish that allowed Vanguard 2 to be spotted by Earth-based instruments.

The Hawk instructions (below) are basically the same as the original kit, but the English text has been replaced with multi-language versions. 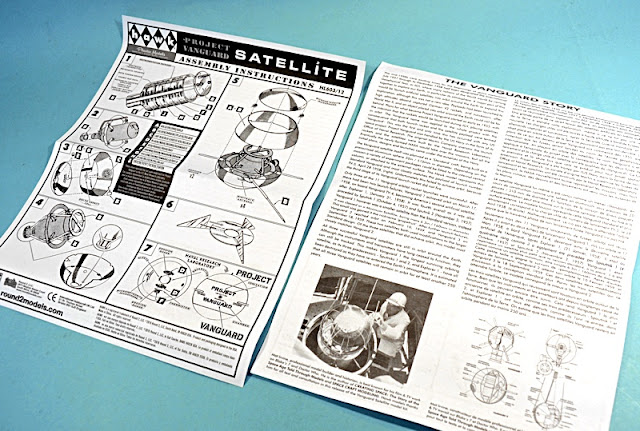 The new kit is cleanly moulded and easy enough to assemble. Sphere components and instrument package (below) are shown here being dry-assembled to check fit - which proved to be good. 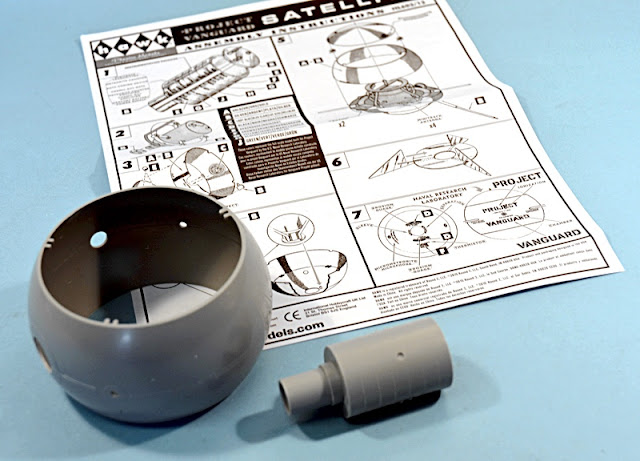 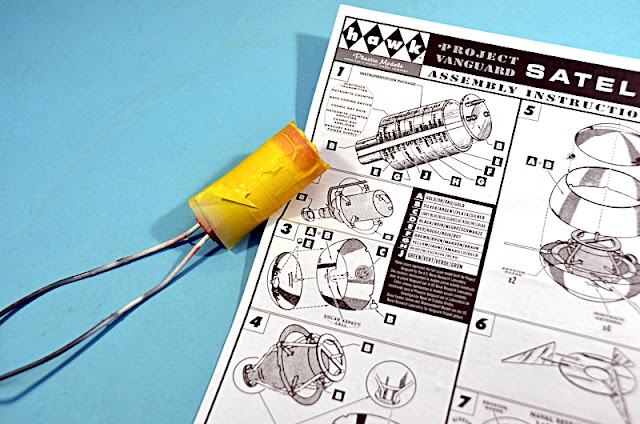 Painting of the instrument package (above, below) requires five colours for an accurate representation. 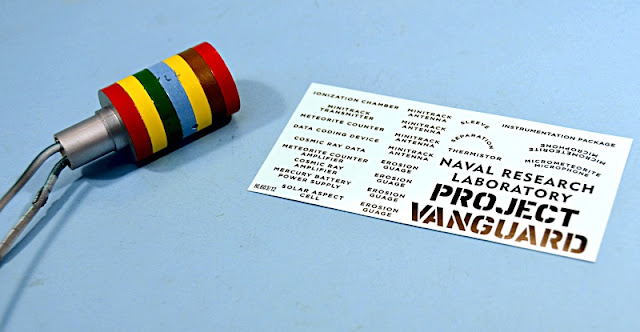 Care is needed (below) when the support section is attached to the instrument package. Note that the decal lettering has to be applied beforehand. 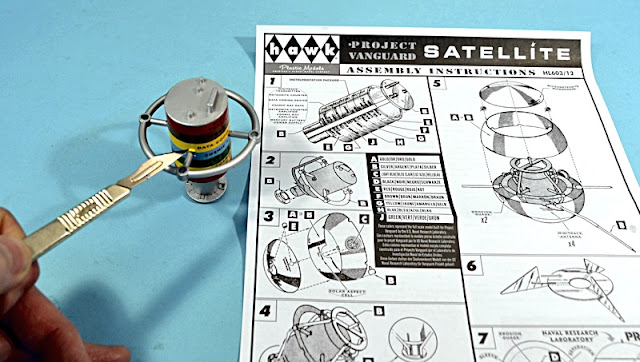 Attaching microphones (below) onto the clear dome. They are tiny and need great care to place them accurately. I found it best to use a non-styrene cement for this fiddly work. 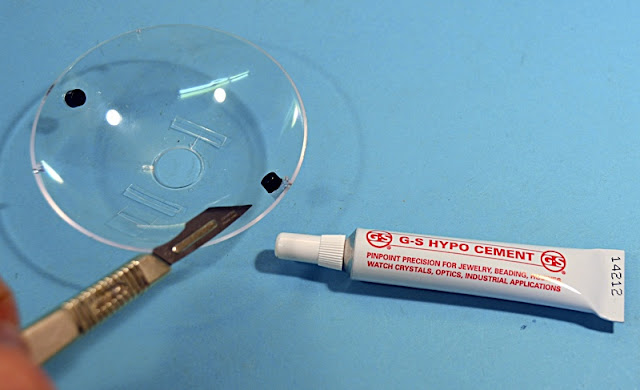 Components for the sphere shown (below) painted and with markings applied, all ready for final assembly.

Oops! The decal spelling error ‘guage’ must be corrected to 'gage' by careful use of knife or scissors. 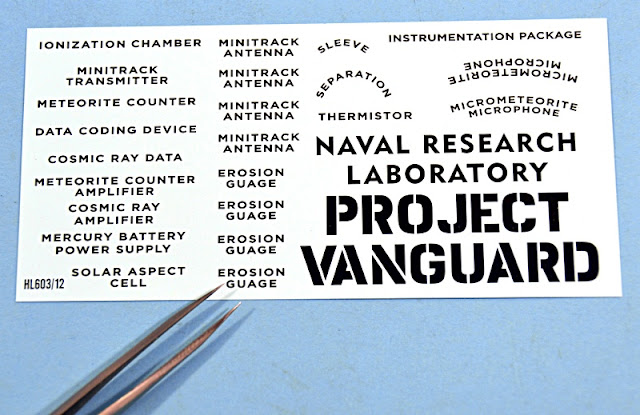 On the real thing, erosion gauges measured hits from space dust and micro-meteorites. On the model (below) I thought it best to represent them with rectangles of black decal sheet, as it’s a neater option than painting. 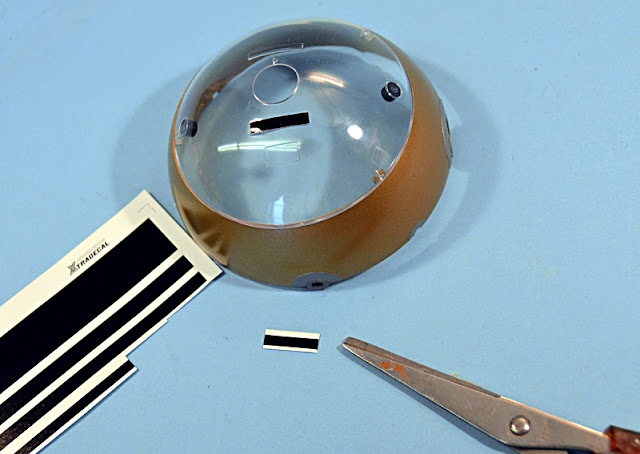 The completed and painted model (three pix below). The decals give it a satisfyingly busy appearance. 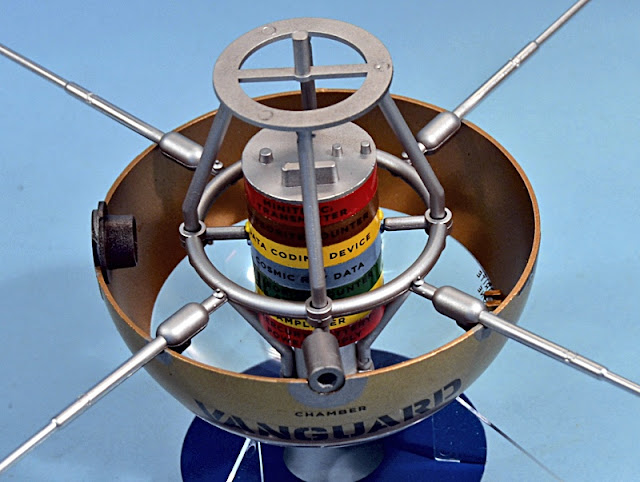 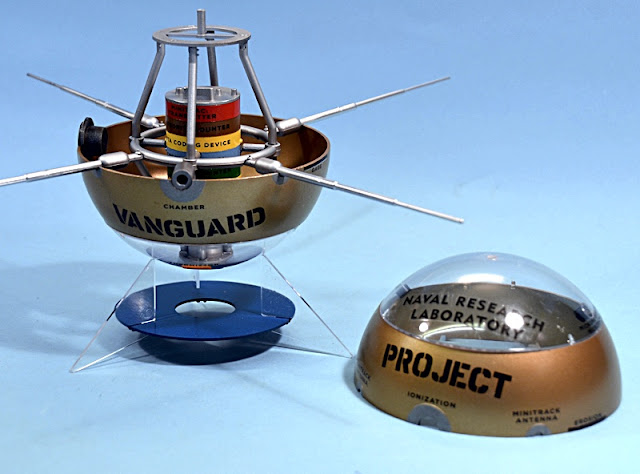 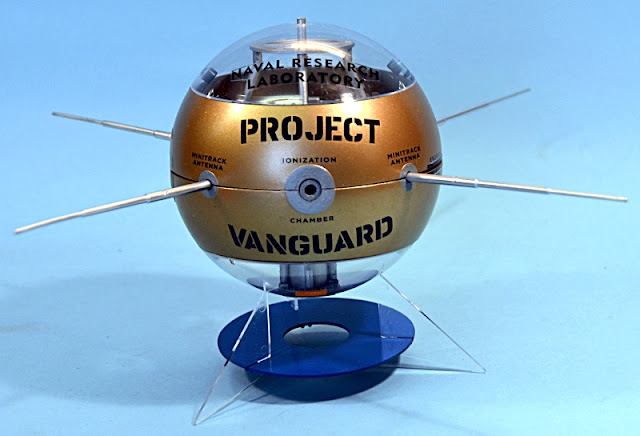 You could also build the model as I have shown it (below) as it would appear in orbit. I achieved this look by painting the model gloss black, then airbrushing overall with Alclad II Chrome high-shine finishing lacquer. 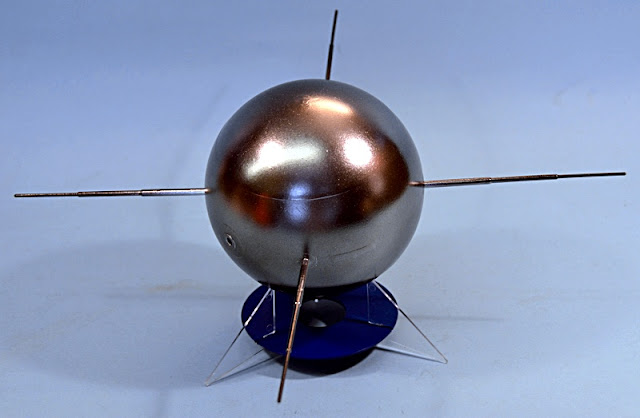 Both versions (below) showing that the gold version looks a lot more interesting, even if it is really an educational concept model. 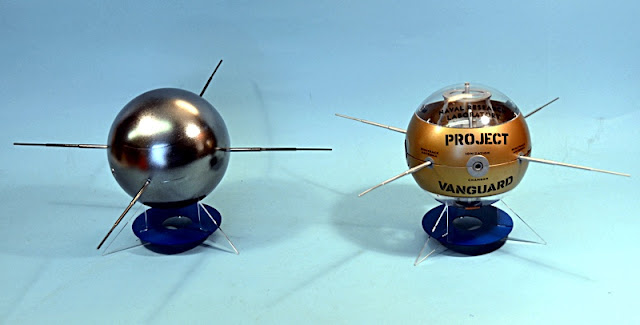 Unfortunately for the original Hawk kit, it was almost too up-to-date with satellite developments, for the model represents what was originally intended as the first Vanguard satellite. But Project Vanguard was plagued with launch failures (only three of the planned 11 were successful) and the first success was with the much smaller Vanguard 1 on March 17, 1958. However, while we don’t have a Vanguard I here, the kit does closely match Vanguard 2, which went into orbit on February 10 the following year.

Vanguard 1 (below) being inspected in launch configuration. 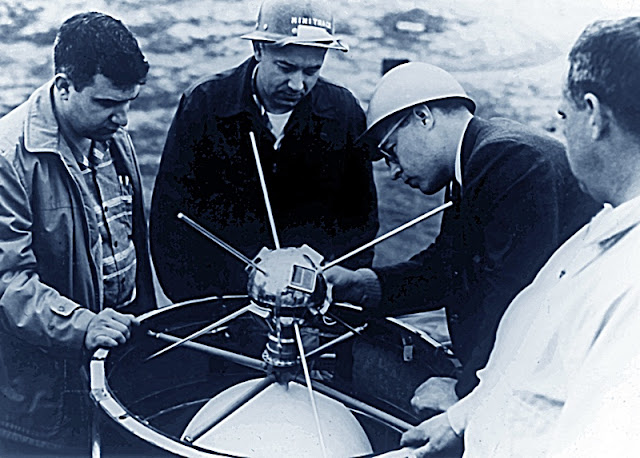 Despite the multiple failures, the Vanguards that made it into space are some of the longest surviving artificial satellites. Vanguard 1, 2 and 3 are still orbiting the Earth, and are likely to remain out there for another 250 years or more.

US Senator Bennett (below) shown with two 1:1 scale models of Vanguard 2 on his desk. This was taken some four months before the launch of the first orbiting satellite, the Soviet Sputnik I on October 4, 1957. 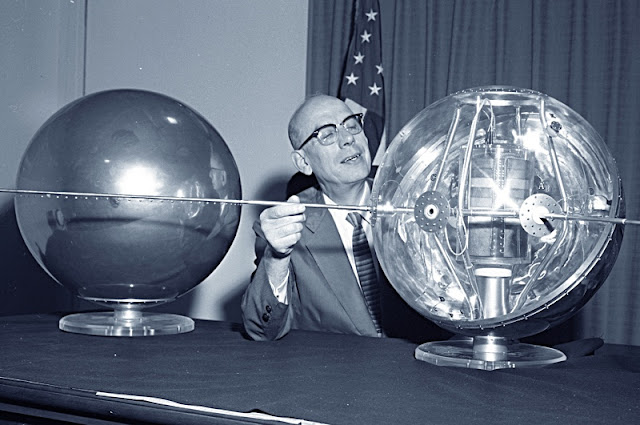 Summation
An interesting kit of a very important US space history-maker, and an excellent choice for reissue. The Project Vanguard kit is simple to assemble, but responds well to care in detailing, and to your choice of final colour. Recommended to all space fans.