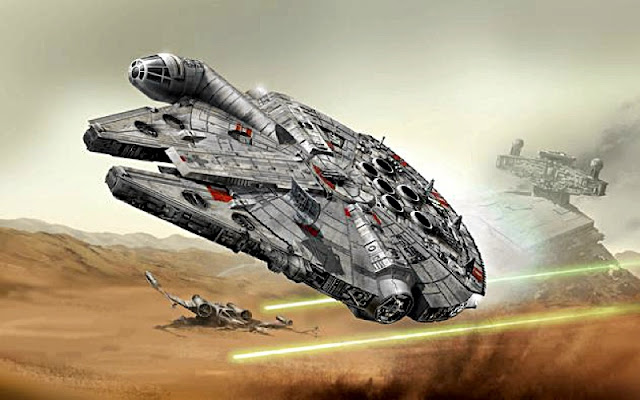 STELLAR NEWS FOR SCIENCE FICTION FANS comes with the latest Revell Snaptite kit of the famed Millennium Falcon starship. Released to coincide with the latest Star Wars movie, the kit has some significant mods to bring it up to date.

Assembly instructions (below) are clear and detailed. The kit goes together reasonably well, though a few components need some extra care when fitting. For a permanent display model, you could think about using liquid cement. 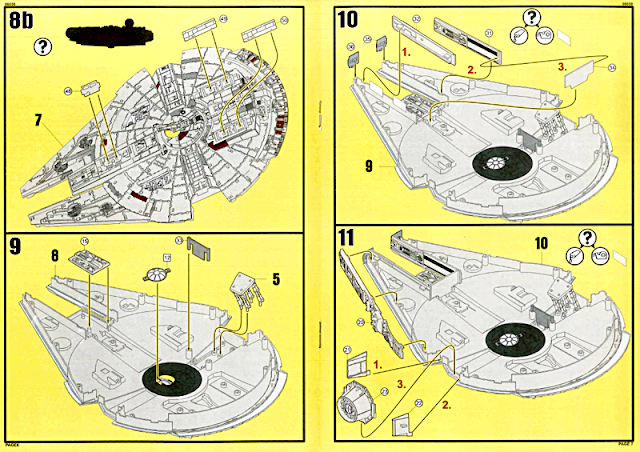 Differences in this latest Millennium Falcon include the antenna (below). It's no longer a dish, now a curved rectangular shape. Detailing is generally crisp, and even though there is plenty of pre-finishing out of the box, smaller details will look that much better if you go in with airbrush, markers and paints. 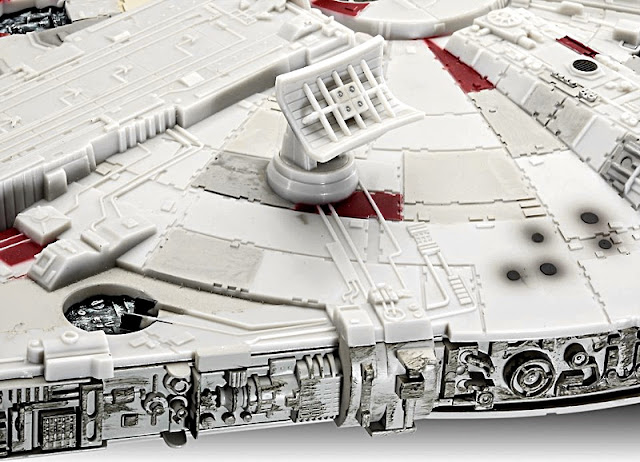 We prefer the original dish antenna (below) which has a more prominent appearance. But it's not a make or break thing, and in any case this sci-fi model invites conversion possibilities. We'll be going for a heavily armoured and up-gunned satin-black stealth version. 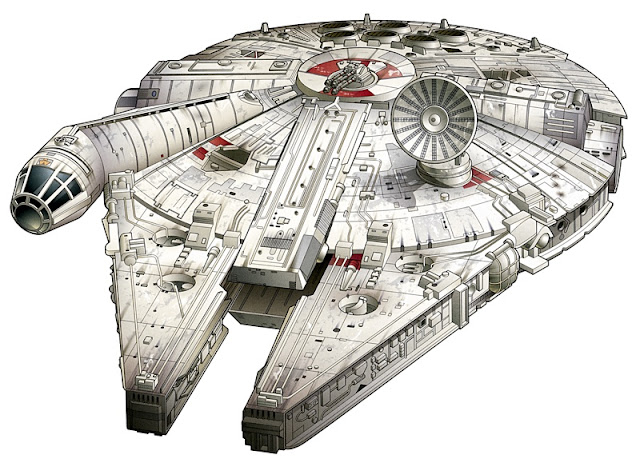 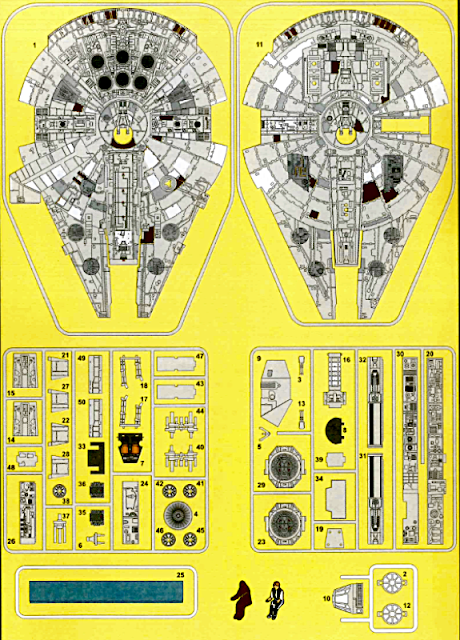 Cover art (below, header) shows the Millennium Falcon hurtling past the vast bulk of a crashed Star Destroyer. A smaller Snaptite kit in the new Revell Star Wars list includes lights and sound effects. It might be worthwhile buying that smaller kit, if only to add these extras to this big 1:72 scale model.

The Revell kit comes with plenty of ready-applied weathering (below) but you can add as much as you like to bring it up to display standard. The weakest point is probably the baby-blue applied across the rear drive efflux. Maybe it's not true to the Star Wars original, but we'd probably forget that and add some tech-looking nozzles and other impedimenta. Either that, or add a lighting system. 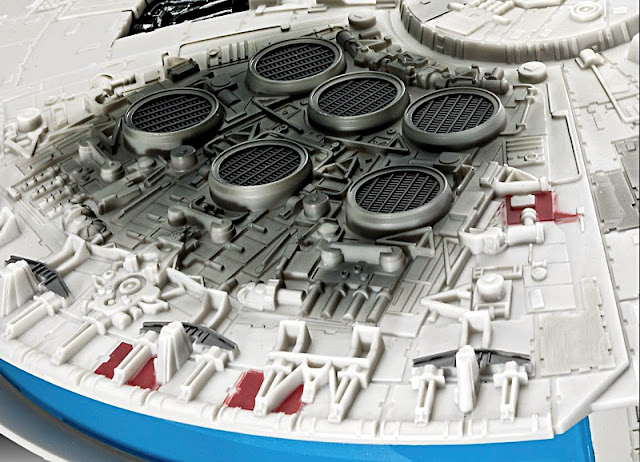 Landing gear is neatly moulded, as are the other parts of this most famous fictional starship. 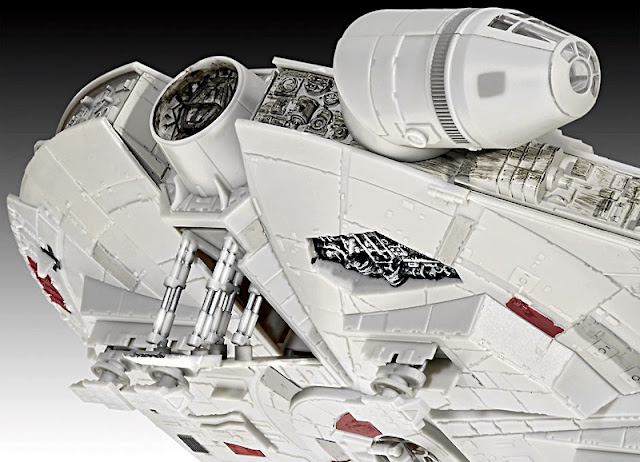 1:72 scale means the Millennium Falcon can be displayed next to a vast range of air and space model kits, which is great news. 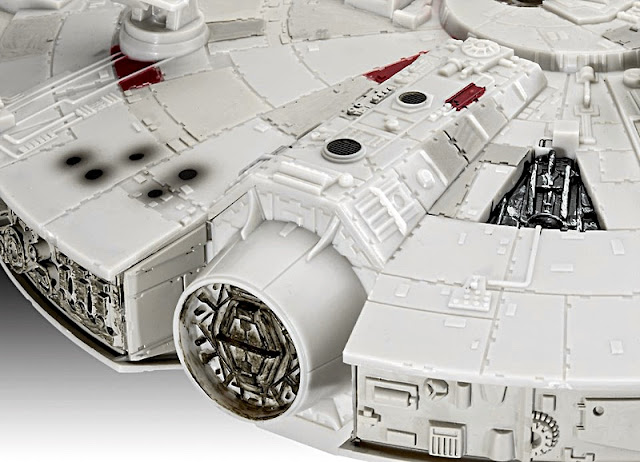 And here is the Revell take on the spacecraft: "... This Corellian transporter is reputed to be one of the fastest and best-equipped ships in the galaxy. The Millennium Falcon may look old and broken down, but continual modifications have made it into something special.

"The crew has for years consisted of the reckless pilot and smuggler become hero of the rebel alliance, Han Solo, and his co-pilot and technician, the trusty Wookiee Chewbacca. A long time ago Solo won the ship from Lando Calrissian in a game of sabacc.

"The Corellian transport type YT-1300 played an important role in the destruction of both battle stars and is probably the most famous ship in the galaxy. Inside the ship there is a hyperdrive that gives it almost double the speed of any imperial star cruiser. The heavily armoured Falcon has an illegal bank of sensors that can track distant imperial ships before they are aware of its presence. The ship goes into battle with the most up-to-date imperial deflector system, two quad laser cannon and two disruptors."