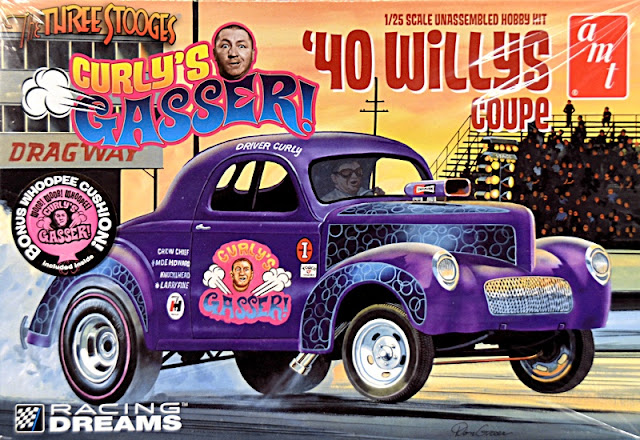 THIS IS THE SECOND AMT CAR KIT using the Three Stooges license originally acquired by Polar Lights. The first model featured a Ford Delivery truck. Now we have a Round 2 AMT 1:25 scale Willys Coupe drag car, configured as ‘Curly’s Gasser.’

Mat Irvine: Curly’s Gasser is a drag racing version of the 1940 Willys Coupe, which is an oldish AMT kit that has been issued and reissued a number of times. This has resulted in some tooling wear, but this is common to many older kits, and Curly’s Gasser still assembles well. New decals and tyres are supplied, the rear drag slicks being excellent mouldings. There is also a new set of wheels to fit these tyres.

The kit is basically designed to be built just the one way. There are a few spare parts for the bits-n-pieces box, including the original wheels, otherwise all the supplied components are used during construction. The component lineup (below) shows the new wheels (bottom of pic) and the two sets of transparent parts (lower right).

Incidentally, the Gasser has been issued in the AMT Racing Dreams series, whereas the ’40 Ford Delivery truck was released in the Silver Screen Machines range, though it’s not clear why that should be so. 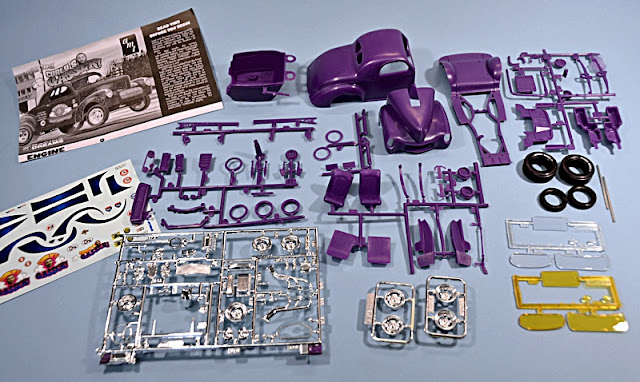 The moulding colour of the plastic is purple, and this was kept and emphasised when I sprayed with Gloss Purple, one of Humbrol’s new acrylic range. This is one of those shades that come up really glossy, even straight out of the can. Engine block and blower scoop were painted the same colour, and it was also used in the interior, after which this section was oversprayed with Testors Matt Varnish. Chassis, axles and suspension were sprayed with Humbrol Moonlight Blue metallic.

A regular feature in reissued AMT and MPC car kits, is that the box includes clear parts duplicated in a transparent shade, in this case orange (below) which works well as a contrast to the purple bodywork. 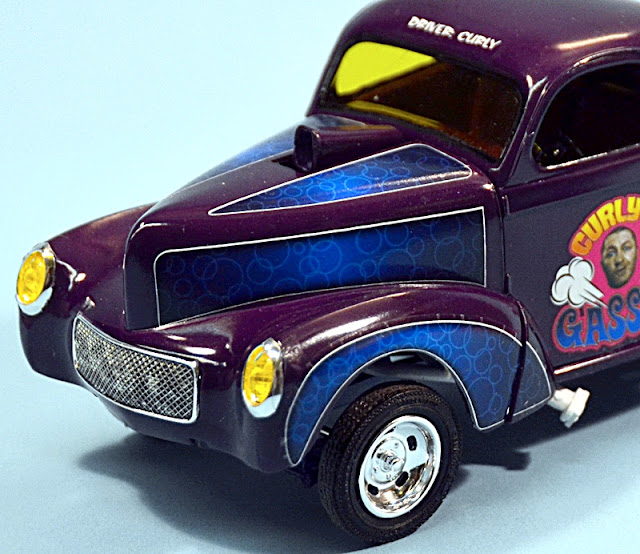 In many ways it is a pity that there are no figures included with the kit. At 1:8 scale, the existing figures made by Polar Lights are way too large, and anyway are specific to The Stooge's 37th short movie We Want Our Mummy. Given that Round 2 (owner of the Polar Lights name) has the Stooges license, new 1:25 scale figures would help considerably and would allow for many diorama possibilities. After all, The Munsters went racing, so why shouldn’t The Stooges?

Closeup (below) of the Curly’s Gasser decal used on each door. 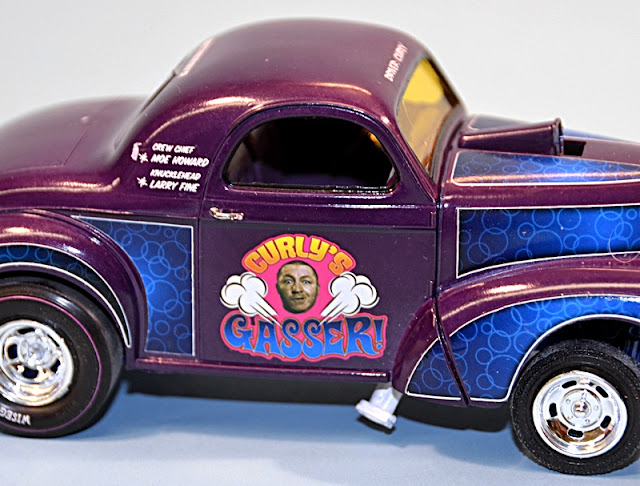 Incidentally, a dragster of this type is called a ‘gasser’ as its engine runs on standard gasoline, not a fancy nitro mix. It was quite likely the choice for Curly as, among his many trademark sound effects, he was constantly making ‘woop, woop, woop’ sounds, before often getting poked in the eye and hit round the head by his older brother, Moe.

Three-quarter rear view (below). Note the new redline drag slicks on the back wheels. 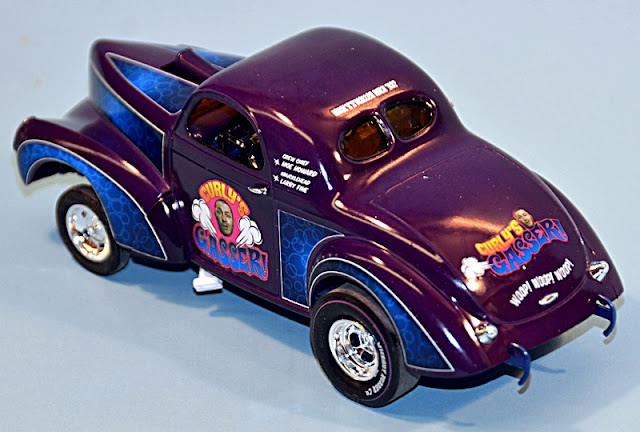 One-piece hood section removed (below) to expose the engine and blower. 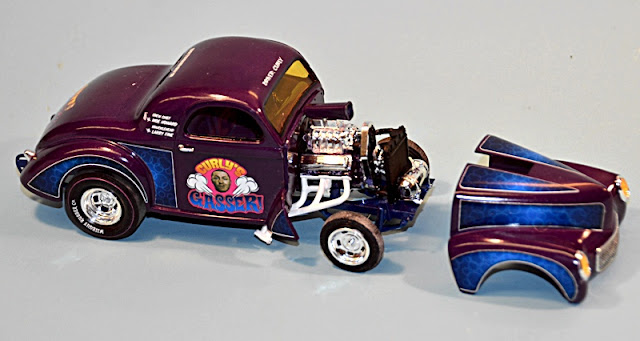 The Gasser's underside (below) was finished primarily in Humbrol Moonlight Blue. 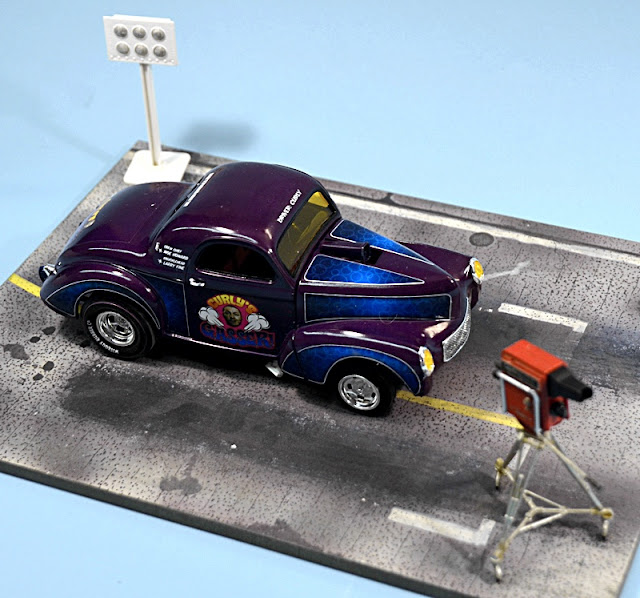 Curly’s Gasser (above, below) in a suitable drag strip setting that I made for the shot. The lights and TV camera came from the AMT Drag Strip Accessories pack. 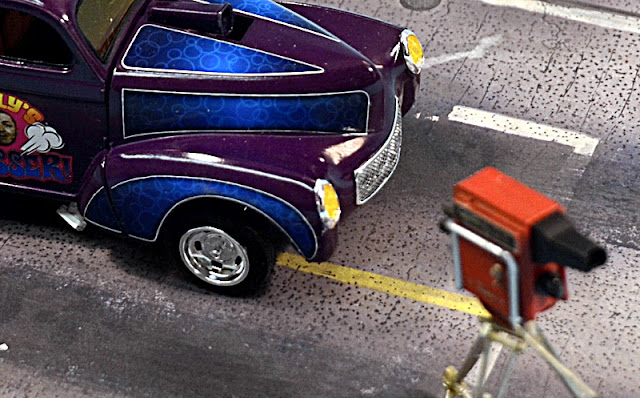 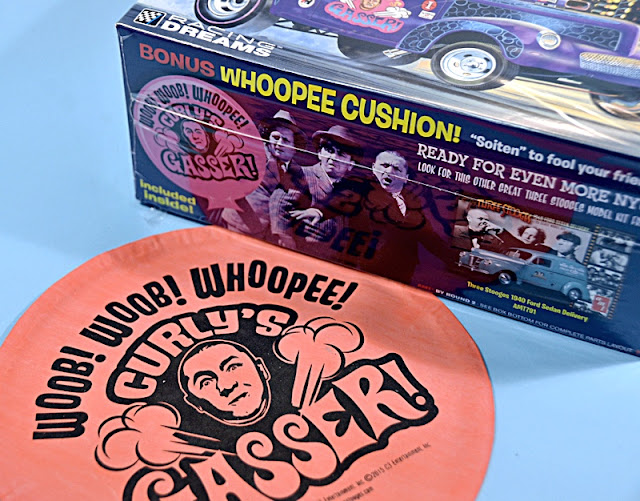 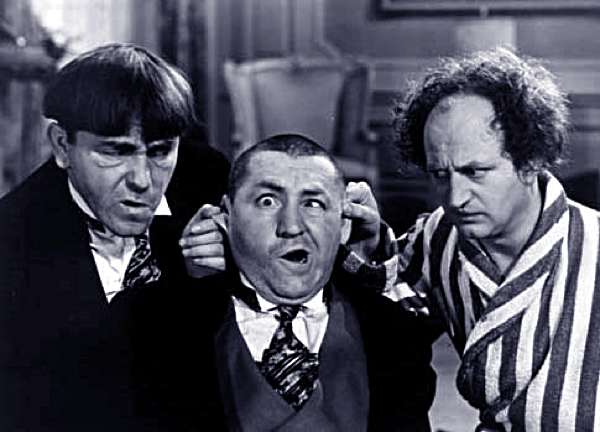 Info for non-Stooge experts: The Three Stooges were an American vaudeville and comedy act of the mid-20th century (1925-1970), best known for their many Columbia short films. Their hallmark was farce and slapstick. In films, the Stooges were commonly known by their first names of Moe, Larry, and Curly. There were six active stooges, five of whom performed in the shorts. Moe and Larry were always present until near the end of the ensemble’s 40-plus year run.

Curly Howard is universally acknowledged as the most creative Stooge of all, even though he had no specific actor training. Curly was initially brought in to replace one of his brothers, Shemp, who left the original lineup to go solo, though he later returned. In real life, Curly liked cars and Jerome Horwitz (Curly’s real name) owned such classics as a 1937 Lincoln Zephyr. Whether he ever drove a 1940 Willys Gasser dragster is another matter, though as Curly, he was up for most things, particularly if told to do so by Moe!