BACK TO THE PAST WITH THE MPC 'GENERAL' STEAM LOCOMOTIVE 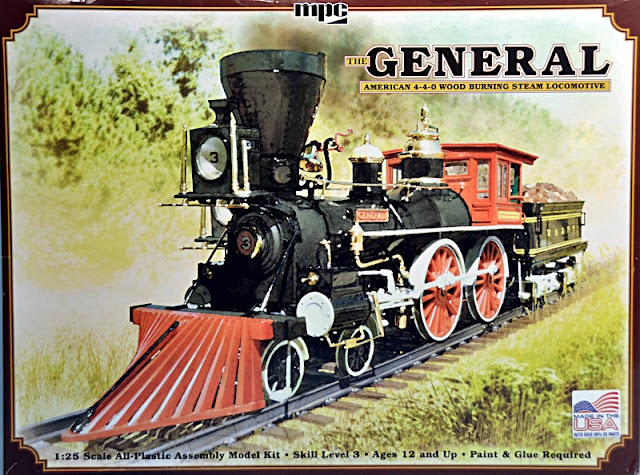 ROUND 2 HAS REISSUED ONE OF MPC’s most comprehensive and unusual kits, the American-type 4-4-0 wood burning locomotive, named the General.

Mat Irvine: A locomotive model is hardly rare in the US - railroads are the biggest modelling subject - but what makes this kit unusual is that it is not to a standard scale such as 1:87, but to the car kit 1:25 scale, making it a very big model indeed. The latest box (header) is the third version of the artwork, but the first that makes it look like a real loco running on rural tracks.

The box base (below), in common with many Round 2 kits, is used to present information that includes a photo of the assembled and finished model. 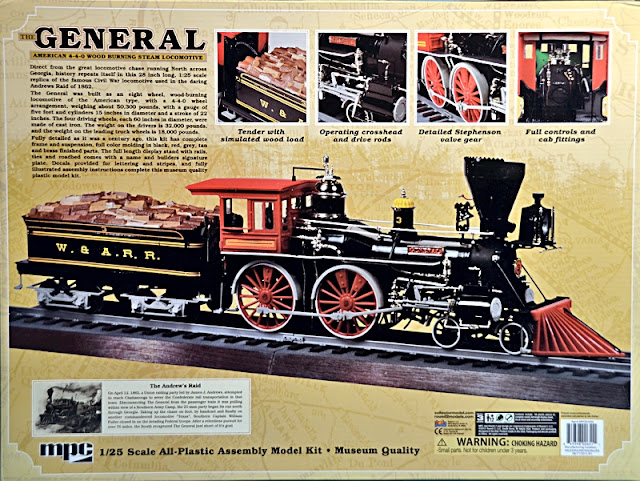 When assembled, the General and tender measure more than two feet long. There are more than 300 parts, moulded in black, red, grey, clear and gold-plated. The two-part display base is moulded in brown. Opening the box (below) reveals that it is packed very full indeed. 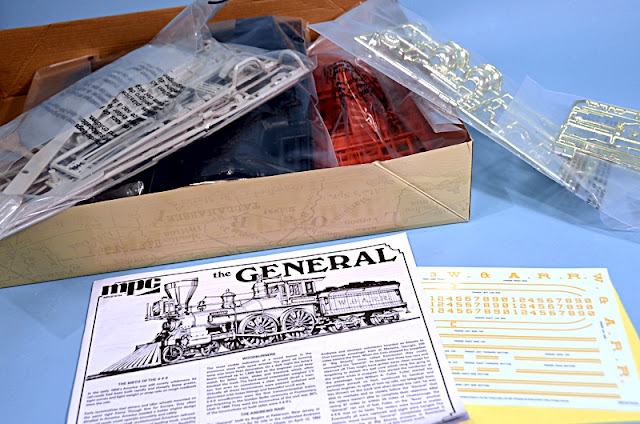 The General kit assembles into two basic modules, the locomotive itself and the large tender, complete with a full load of simulated wood. The General was brightly painted, and the plastic moulding colours give the main finishing colours. In addition, MPC has supplied a comprehensive decal sheet that includes numbers and yellow striping.

There are a lot of parts (below). These are just the black runners. 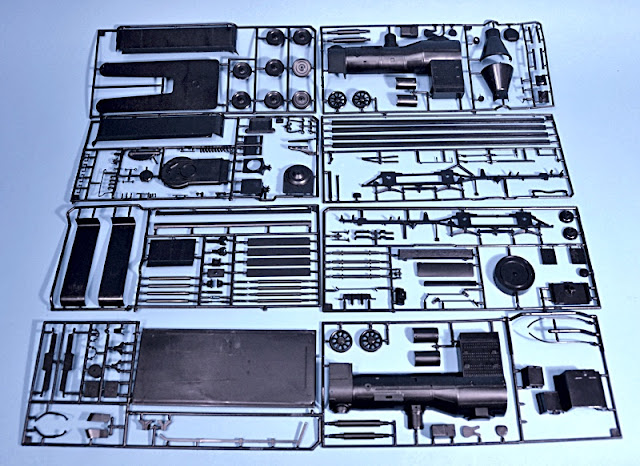 The kit represents the General as it was originally built, though the loco underwent various changes over the years, especially regarding fuel. As it was a wood-burning loco, the first fuel was indeed that. But in the 1870s, the engine was converted to coal, and that changed the appearance considerably, especially to the boiler and smokestack.

Other components (below) are moulded in red, grey, clear and gold-plated. 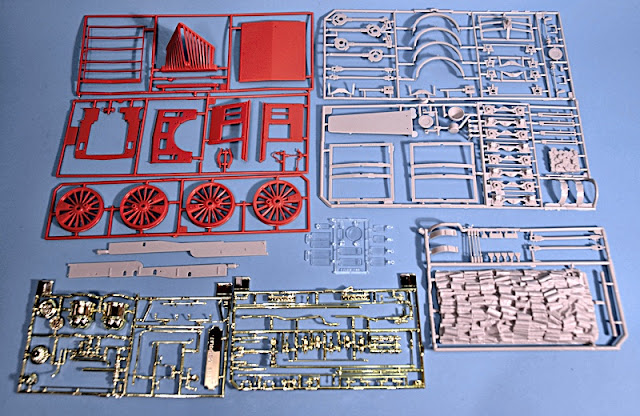 But by the end of the 1890s the General went back to wood burning, which converted the boiler back to look like the original. But that didn’t last long, it was converted back to coal, though this time the wood-burning ‘look’ of the boiler and smoke-stack was retained. Finally, in 1959 the General was converted to run on oil, though the original wood-burning was still retained, even down to a fake load of wood covering the oil tanks in the tender. Even the gauge has changed. Initially the loco ran on 5-foot gauge, changed in 1886 to US Standard Gauge, the same as British gauge of 4 ft 8.5 in.

Display track is also supplied in this kit. The track base (below) is formed from two brown plastic sections. Comprehensive instructions and decal sheet are also supplied. 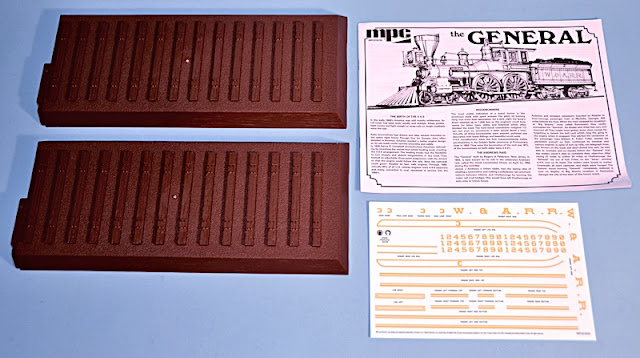 I decided to build a diorama, using the kit with a DeLorean car to show a scene from the hit movie Back to the Future III. But there was a snag... The General used the 4-4-0 wheel pattern, with four leading wheels and four driving wheels. Although over 90 percent of American locos of the period used this wheel arrangement, the one that starred in BttF III was a 4-6-0. 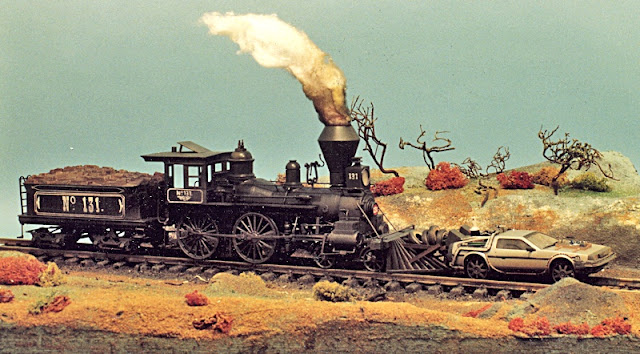 Consequently, I had to make a compromise. I started with the MPC kit but had to leave it as a 4-4-0, so the loco is not strictly correct. Instead, the diorama is intended to capture the ‘spirit’ of the movie.

Doc Brown’s DeLorean was made from the Aoshima kit, also issued by Halcyon and as an Ertl Blueprinter. Round 2 issues its own snap-tite kits of all four versions of the BttF DeLorean under the Polar Lights name. 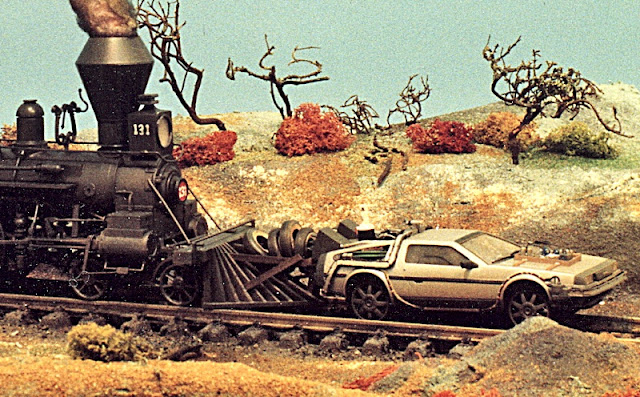 In real life, the locomotive became famous as a result of its part in the Andrews Raid, better known as ‘The Great Locomotive Chase’ of April 12, 1862, during the American Civil War. Unionist James Andrews and colleagues boarded the General in Confederate territory, during one of its refuelling stops - then they stole it! 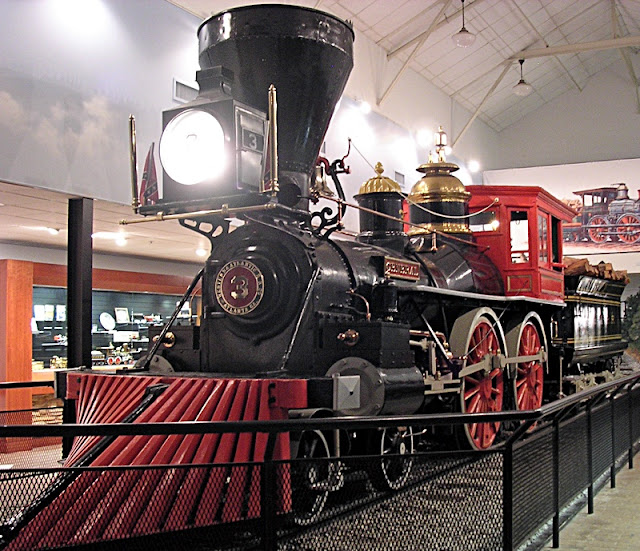 The story was made as a silent film by Buster Keaton in 1926, and a more authentic Disney version in 1956. The General was at that time still running and trackworthy, and made tours, but ironically the loco wasn’t used by Disney. Instead, it had a stand-in, the similar-looking William Mason locomotive.

The General can now be seen at the Southern Museum of Civil War and Locomotive History in Kennesaw, Georgia (above). Kennesaw was the town where the original heist took place, though at that time it went by the name of Big Shanty.