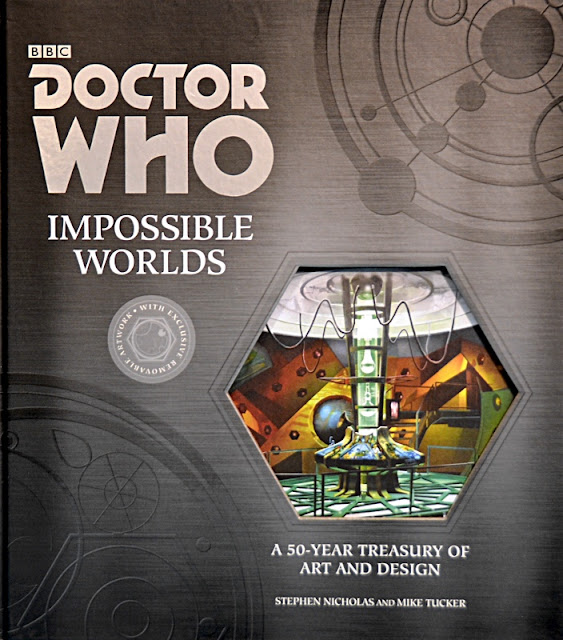 IF YOU HAVE RECEIVED a book or gift token this Christmas, how about splurging it on this lavish coffee-table book? BBC Impossible Worlds - A 50-Year Treasury of Art and Design provides a colourful look at the artwork from BBC TV’s long running science fiction series, Doctor Who.

Mat Irvine: Written by Stephen Nicholas and Mike Tucker, two people associated with Classic 'Old' and 'New' Who, Impossible Worlds charts ways in which the long-running TV series has changed over the years. It ranges from the somewhat simplistic look - primarily due to severe budgetary limitations - of Doctor Who’s early years, to the latest incarnations that use all the tricks of the visual effects trade.

Opening up the front cover (below) reveals the hexagonal cutout that allows the Tardis console to show through. 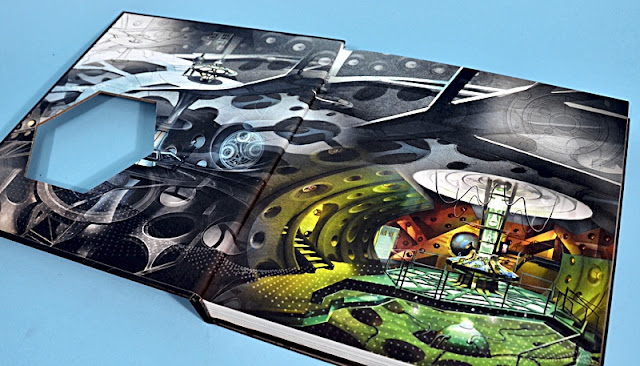 The book’s emphasis is on design and artwork, though there are also photos aplenty that show how the concept art was transformed into reality. Mike Tucker handles the early years, though he is one of the few people that have worked on both Old and New Who. Stephen Nicholas tackles the more recent series, and these have an advantage in that there is so much more available pre-production artwork.

Designs (below) for a few of the non-spacecraft vehicles that have appeared over the years. 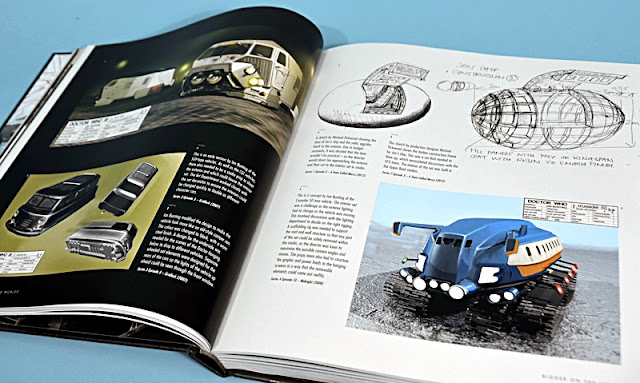 In the old days, frankly, we mostly just got down and built it, with design artworks being few and far between. But some designers did use traditional drawings, one of them being the late Ian Scoones, a brilliant artist who had previously worked for Hammer Films and Gerry Anderson.

Ian Scoones’ sketch (bottom left below) for the shuttlecraft as used in The Invisible Enemy. The model itself is shown above the sketch in its miniature setting. 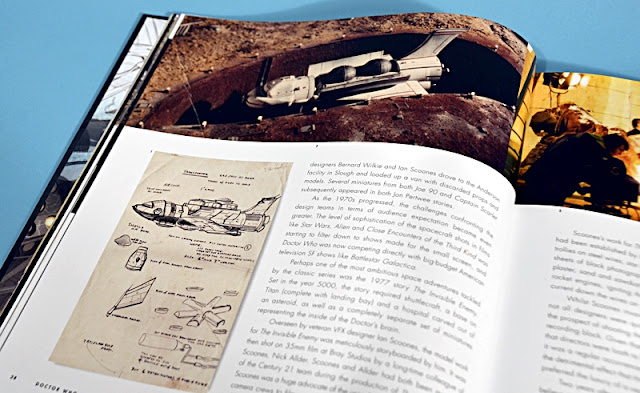 This has meant that Scoones’ storyboard images for such stories as The City of Death are in the book, pictured with what was eventually built. His sketches of the shuttle that featured in The Invisible Enemy is also shown. Incidentally, I built the model for this, even if we all got the look of the Saturnian moon, Titan, completely wrong. The Cassini and Huygens spaceprobes have since shown us the real thing, though reality hasn’t affected the story itself.

The older illustrations were in the main classic pen and pencil artwork, even if Ian could produce exquisitely detailed full-colour storyboards. These days images can be digitally generated.

Yes, you get Daleks in the book (below) and loads of them. This is just one spreadful. 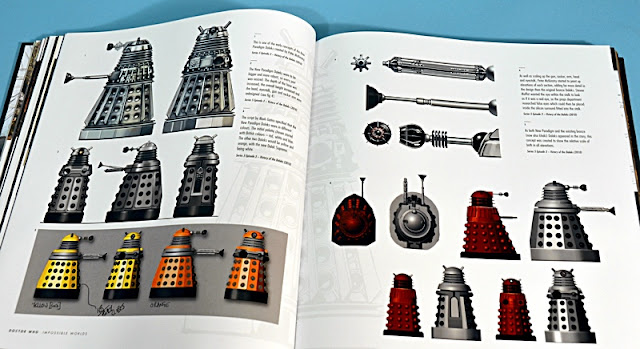 Daleks have formed a large part of Doctor Who scripts, and a whole chapter is devoted to them and their fictional creator, Davros. Some original Ray Cusick drawings have been discovered, including the initial plan (soon abandoned) that the Dalek operators would power them by riding a tricycle!

Small pix are included of the authors, Stephen Nicholas (below, top) and Mike Tucker. 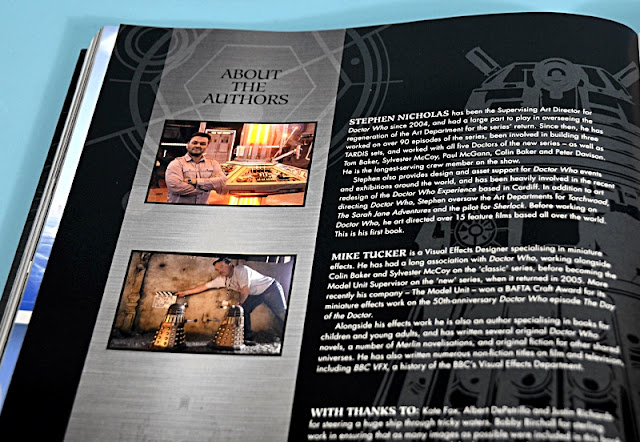 The Cybermen get a similar treatment, the authors taking us from the first versions with cloth face masks (which I still find more sinister than any modern style) to the latest designs, which makes them look less humanoid.

The back of the book includes a bonus (below) in the form of an envelope containing a collection of art prints. 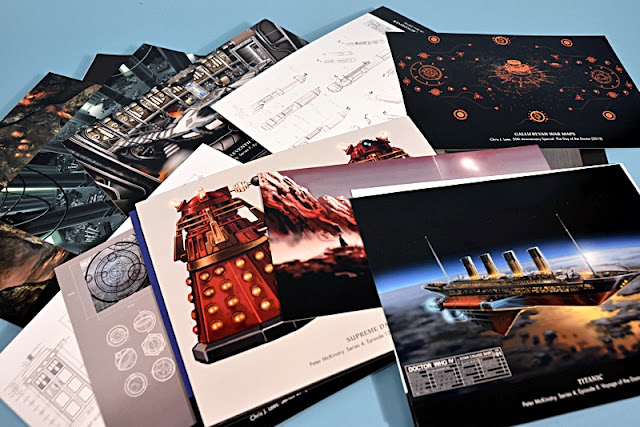 Gadgets have formed a major part of any Doctor Who story, and so yet another chapter pictures a wide range of technical objects. They are all here, from communicators, weapons, variations of the Sonic Screwdriver to the Marconiscope, the Bakelite Box, and beyond.

The final chapter of Impossible Worlds looks at alien planets. For off world environments, Classic Who stories usually relied on what was generally known as the ‘BBC Quarry’ (it was actually in south London) or the ‘BBC Forest’ (Black Park, outside Pinewood Studios). For anything further afield, miniature landscapes were usually constructed. Today of course, whole planets can be computer-generated, with the advantage that tiny details can be included - previously, they could have been too expensive to build.

Yet good as visual effects are at creating a realistic setting, when it comes down to it, any fictional film or TV show needs a good story, good acting and good direction (and, I would add, good editing). But it helps considerably when it all looks good as well - and this book certainly shows how far Doctor Who has come.

Summation
A big book that is packed with interesting stuff, making it an essential read for Doctor Who fans. For scale modellers, the miniatures shown give plenty of ideas for your own dioramas and other science fiction creations.