WE LIKE FLIGHT AND FLYING so offer no excuses for showing this short-short movie clip, shot on a GoPro from the front seat of an F-16 Fighting Falcon combat jet.


SMN report: Note the way the pilot flicks the plane off the deck, then holds it straight and level for a few seconds to build up speed and energy. Then a firm pull back on the stick, twin vortexes swirl from the wing leading edges, and whoosh... up he goes, ending the brief climb with a nice victory roll off the top.

Local airfield, clear the flight line. We feel a need... a need for speed...

The F-16 is well represented in the ranks of plastic kits, with some really good productions out there. It should be of course, as with production in excess of 4500 airframes, the aircraft is by far the most produced Western combat jet ever made. Of all those available, the Tamiya 1:32 F-16 CJ is probably our favourite.

The Tamiya F-16 F-16 CJ Block 50 Fighting Falcon is one of the company's 1:32 scale lineup that includes the F-4 Phantom II, F-14 Tomcat and F-15 Eagle. As a kit, we reckon it’s the most detailed F-16 available, and includes some features that would have been difficult or impossible to achieve in smaller scales.

Tamiya engineers have given considerable thought to the implications of the F-16's size and weight, by having a diecast landing gear for strength, with tyres moulded from rubber rather than plastic. The metal landing gear is something other large-scale manufacturers could ape, especially when it comes to 1:24 scale and bigger.

For those of us who hate filler, the F-16 construction breakdown will be pleasing. The upper wings are moulded to the fuselage in one piece, meaning there are no nasty joints or seams to worry about. 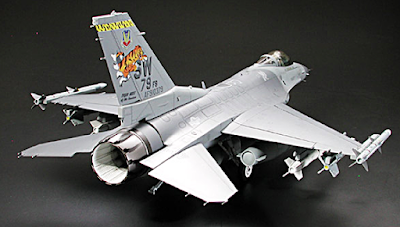 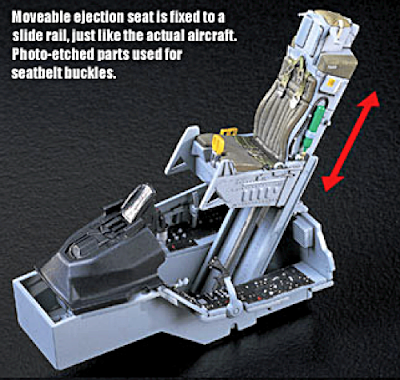 The ejection seat (above) has a moveable slide rail, and the bubble canopy (below) comes in two options - clear or smoked. Heavens be praised, Tamiya has included a more than decently sculpted pilot figure. 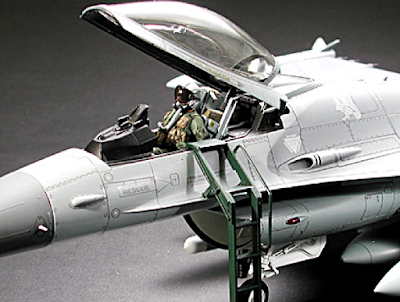 Moveable features include the gun door and nose cone, both of which can be opened to display the machine gun and radar system. The model is potentially a tail-sitter, but Tamiya has included a nose weight, so you won’t be hunting around in the spare-parts box for this essential item.

Tamiya has used miniature polythene caps for securing the supplied ordnance (below). Using the caps, missiles, ECM pod and external fuel tanks can be taken off at will, or moved to different stores points, allowing the model to be tailored for different combat missions. Polythene caps are also used for control surfaces, allowing free movement. 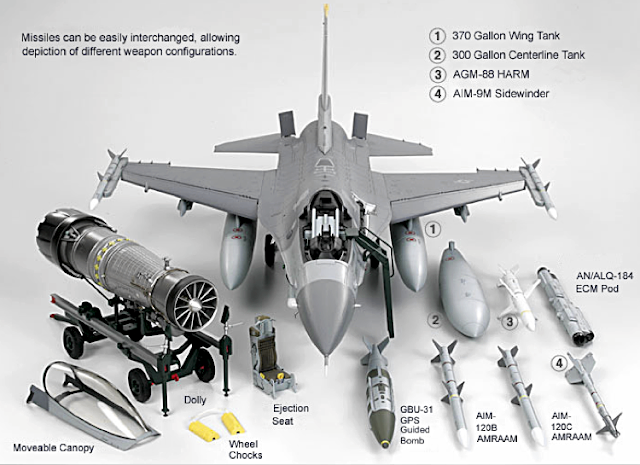 The box (below) is a truly useful feature in itself, as it has been designed to allow the fully-assembled model to be stored safely when not out on display. After the fin and rudder assembly are detached, the whole machine can nestle neatly in the space available. 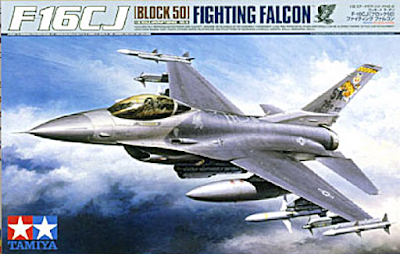 The General Electric F110-GE-129 engine (below) is nicely modelled and uses a hook and rail system to slide into place, as does the real thing. It can also be displayed on the included wheeled maintenance dolly. 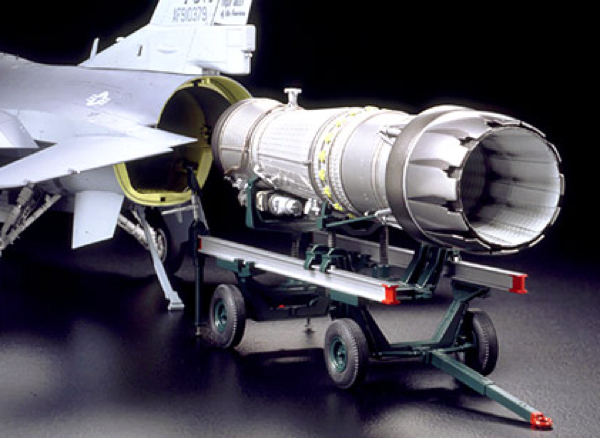 More metal components in the box include those for pitot tube and static discharge wicks, with photo-etch parts for seat buckles, radar antenna, chaff/flare dispensers - and an optional nameplate for display purposes.

About the F-16
The F-16 Fighting Falcon is presently flown by the air arms of more than 20 countries, and has been in service since its introduction in 1978. The F-16CJ Block 50 has upgrades that include a powerful General Electric engine, and the ability to tote the AGM-88 HARM (High-Speed Anti-Radiation Missile) and targeting system. The F-16CJ is used for ‘Wild Weasel’ SEAD (Suppression of Enemy Air Defense) missions, their aim to search for and destroy enemy radar and missile sites.