MERCURY RISING FROM DOWN UNDER - SPACE CAPSULE KIT FROM AUSTRALIA 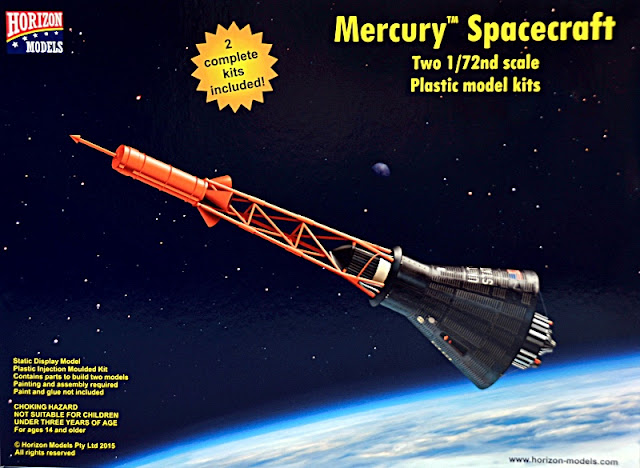 IT’S NOT OFTEN WE can welcome a brand-new kit company to the fold, especially one that is using injection styrene, so it’s a big hello to Horizon Models from Australia.


Mat Irvine: Horizon Models was actually started in 2015, issuing its first kit late that year, a 1:72 scale Mercury spacecraft. Some comments were made about the fact that Dragon had recently made a 1:72 scale Mercury, so why another? But no one seems to complain that virtually all the model companies make Spitfires, Mustangs, or Space Shuttles. So we don’t mind a bit if there’s more choice out there where space capsules are concerned. Also, the Horizon Mercury kit is more detailed than the Dragon release, and it  allows for more build options.

The kit box's side panel (below) shows two finish options. 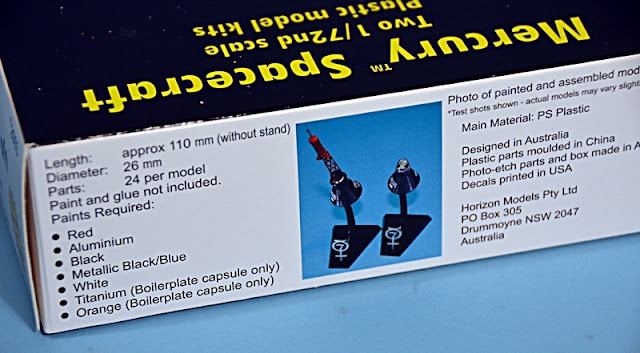 There is no separate instruction booklet. Instead, all details (below) are printed on the back of the box. These are comprehensive, although the Mercury book in Mike Mackowski’s Space in Miniature series would make a good additional reference. 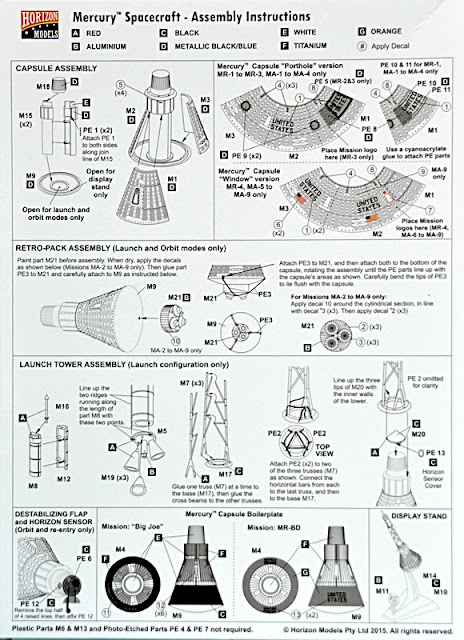 What’s in the Horizon Mercury box (below)? You get two identical component runners, two sets of photo-etch components, and a decal sheet that has most markings printed twice. The idea is that you can build any of the six manned Mercury capsules, or a number of the unmanned ones as well, including what are usually referred to as boilerplate versions, more of which at SMN here. 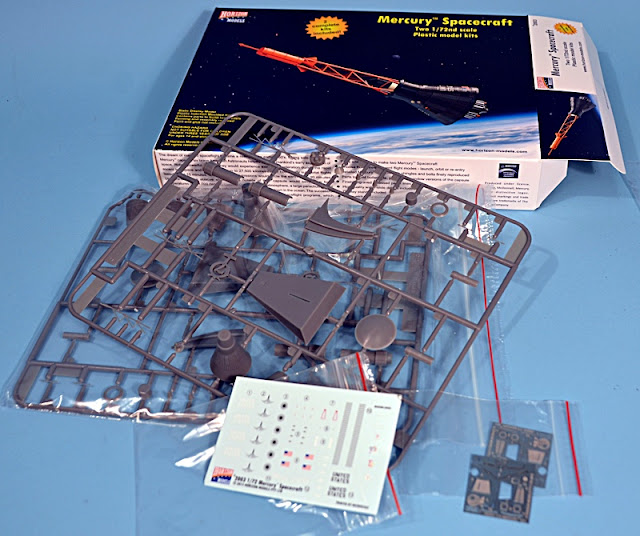 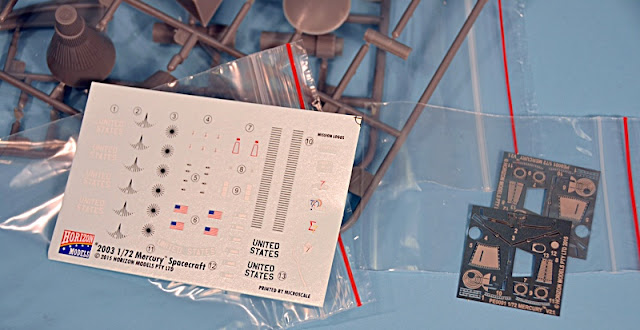 The conical body is built up one of two ways - either out of three sections to form the cone, or as a one-piece moulding for unmanned versions. The Launch Escape System (LES) (below) is built up from three very fine gantry parts, plus the upper rocket. This is painted in what is referred to as orange, but for all intents and purposes is a bright red. 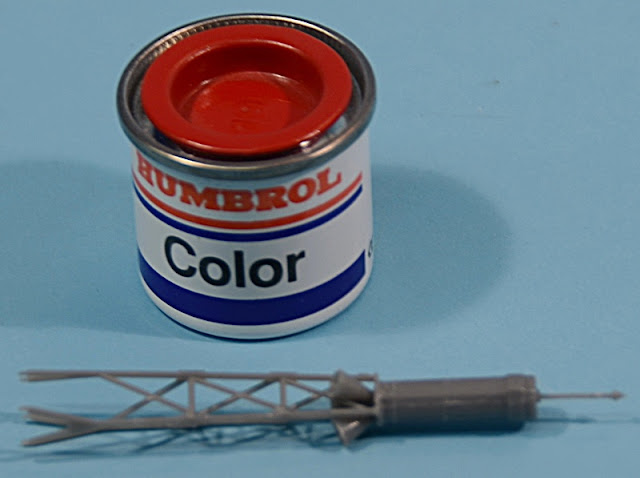 Construction of the Launch Escape System (above) is probably the trickiest section of the build. The two forms of Mercury spacecraft are shown (below), one piece is used for the unmanned craft (left), three components make up the manned version. 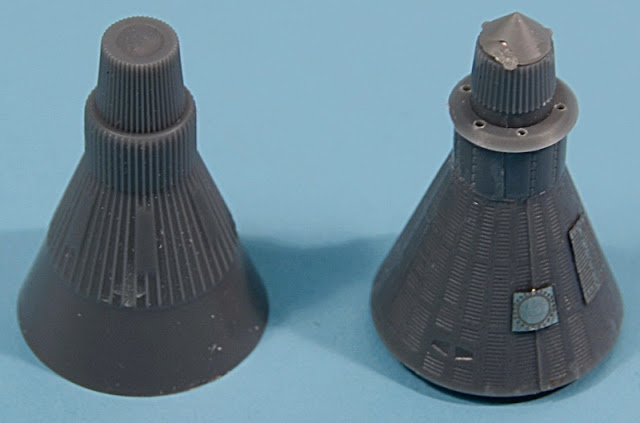 Masking and painting the heat shield of the orbital flight version in a dark metallic brown (below). More details on building a Mercury spacecraft using the much larger 1:12 scale Accurate Models kit is in my Scale Spacecraft Modelling book. 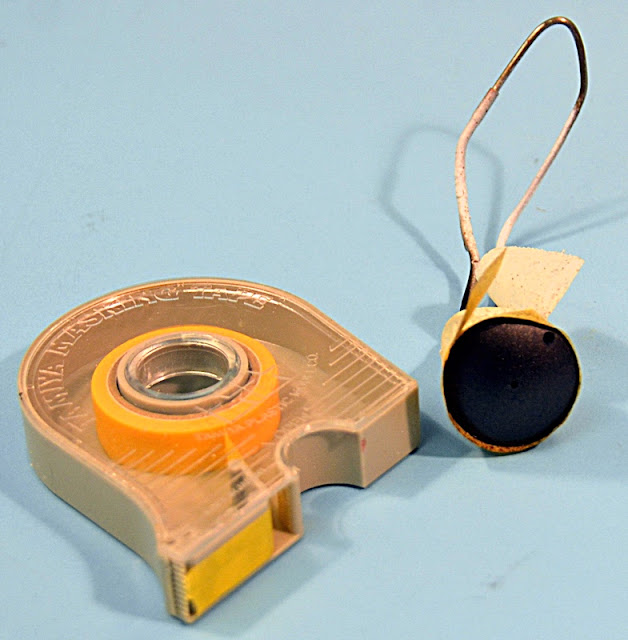 The Mercury body (below) is for manned launches at least, black overall, though this is a colour that has been debated for years, as it usually looks blue in contemporary photographs, as do two-seater Gemini spacecraft. But in reality, this is down to the reflections of sea and sky, and also probably the blue cast of 1960s-era film stock. 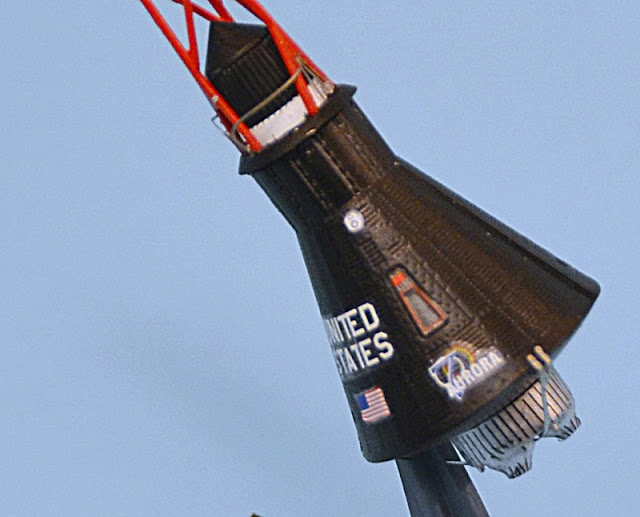 The real capsules were black, with a slight metallic sheen, primarily as they had no overall paint finish, instead being the natural colour of the bare-metal alloy used. Humbrol has usefully increased its range of aerosol paints, one of which is Metallic Black, so that was used here.

Note (below) the black object on the stand front. It's not a rest for the spacecraft, actually being a neat rendering of the astronomical symbol for the planet Mercury. 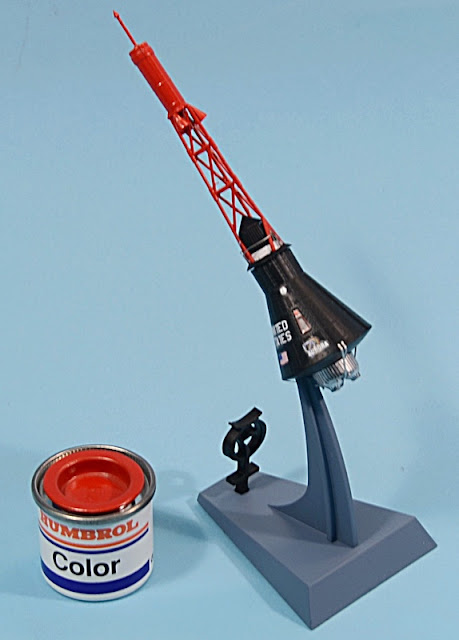 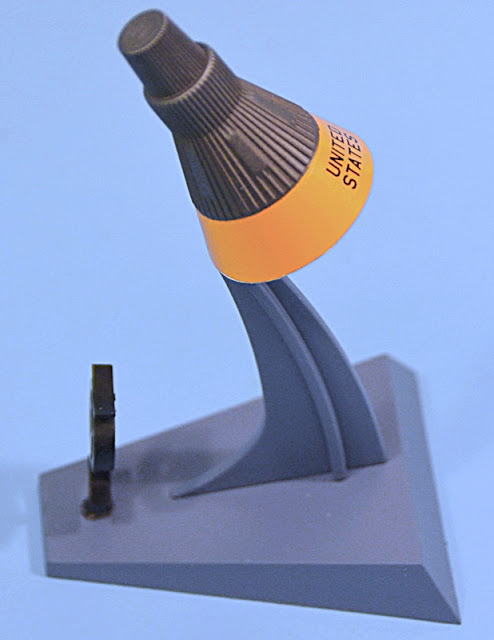 The window shape changed from earlier Mercury capsules launched on Redstone rockets for sub-orbital hops, and unmanned Atlas launches, to the manned orbital Atlas flights. This was primarily down to circular portholes for the former and trapezoid windows for the latter. The former have been supplied as photo-etch parts that are reasonably easy to add. Snip off them off, curve to match the cone shape, then superglue in position. 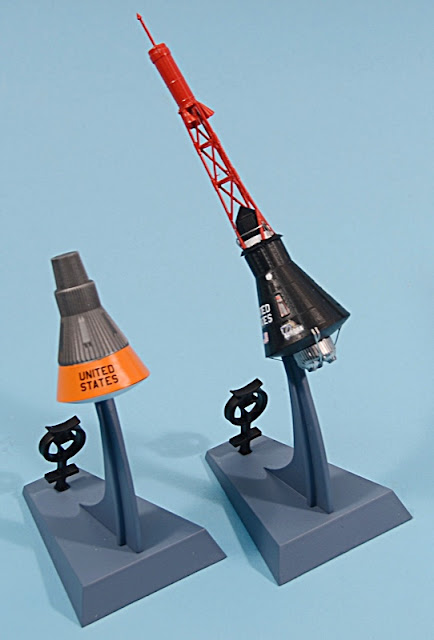 Alternatively you can use the window details that are on the decal sheet. There are also decals for the stripes on the retro-pack for later Atlas flights, and names for all six manned flights - so just take your pick and apply. And if all that isn’t enough, you can also build an in-orbit craft, with the LES tower gone, but with the horizon sensor deployed, built up from photo-etch parts. 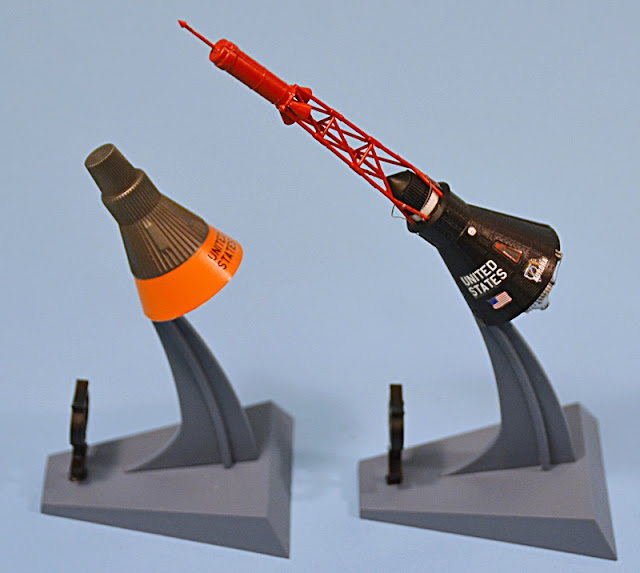 Unmanned Mercury capsules were made of different materials, some being actual boilerplate, and some did involve paint. Two versions are detailed - Big Joe, which has a black and titanium cone, and Mission MR-BD, the fourth launch on a Redstone. This had a slightly brighter titanium and orange scheme.

Both completed kits and spare parts built up (below) into what could become third and fourth models. All they lack are heat shields and stands. 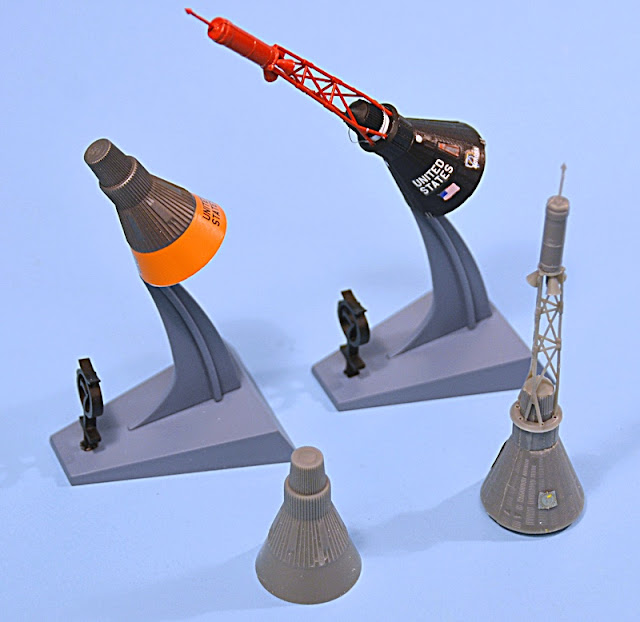 There were 28 Mercury launches, including six manned flights and four with chimpanzees. Full details of all are found in Volume 5 of the Space in Miniature book series (below). Most, if not all versions could be built from this kit. 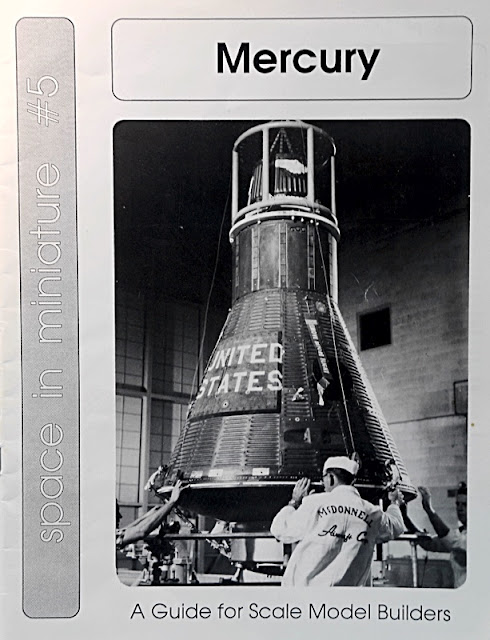 Summation
An excellent start for Horizon Models, and a second kit has already been announced (bottom). This is also a ‘first’ in injection styrene, as it is a complete Mercury-Atlas in 1:72 scale. The Mercury is manufactured in China, but the Mercury-Atlas is an all-Oz production - designed, tooled, and made in Australia.

Note: As indicated, you can nearly build four models, as there are almost enough parts to build two manned Mercurys and two unmanned, or more precisely two with the LES and two without. (Some unmanned flights had the LES in place.) All that is missing are two additional heat shields, which would be easy to scratch-build if you want to go this route. Otherwise there’s enough of everything else, including PE and decals. 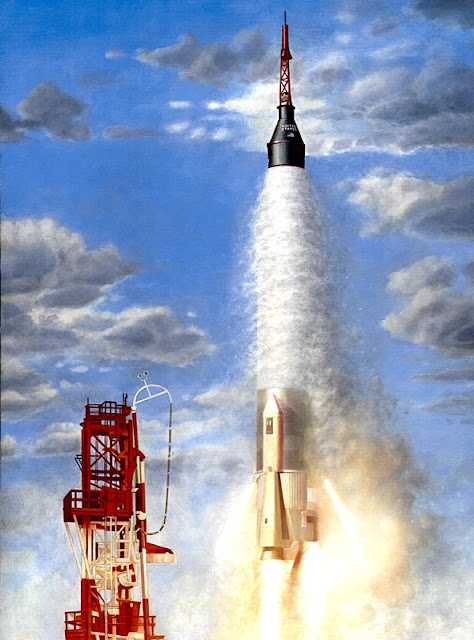 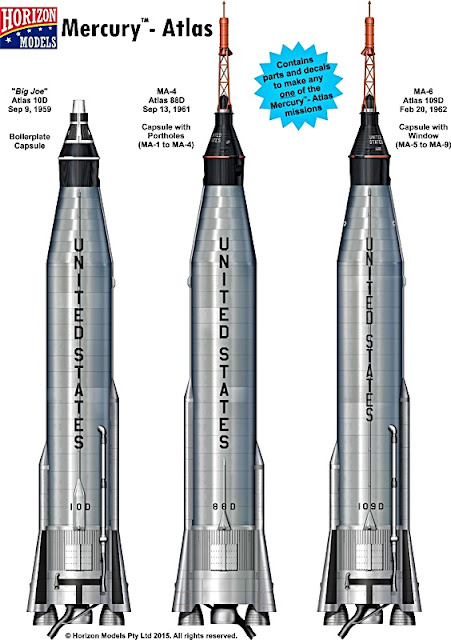 Thanks to Tony Radosevic, Managing Director of Horizon Models for the review kit. SMN says, “Keep up the good work!”