A PECULIAR EFFECT ON THE BBC - THE STORY OF BERNARD WILKIE, VISUAL EFFECTS GURU 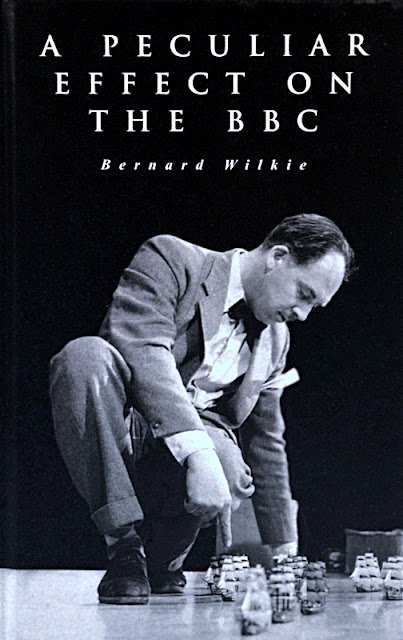 A PECULIAR EFFECT ON THE BBC WAS WRITTEN BY the late Bernard Wilkie, a founder of the BBC Visual Effects (VFX) Department in 1954. The department started by making scale models for schools TV broadcasts.


Mat Irvine: Bernard died in 2002, and although he wrote a standard manual The Techniques of Special Effects in Television (Focal Press) many years ago, A Peculiar Effect on the BBC is a memoir that has remained unpublished until now. 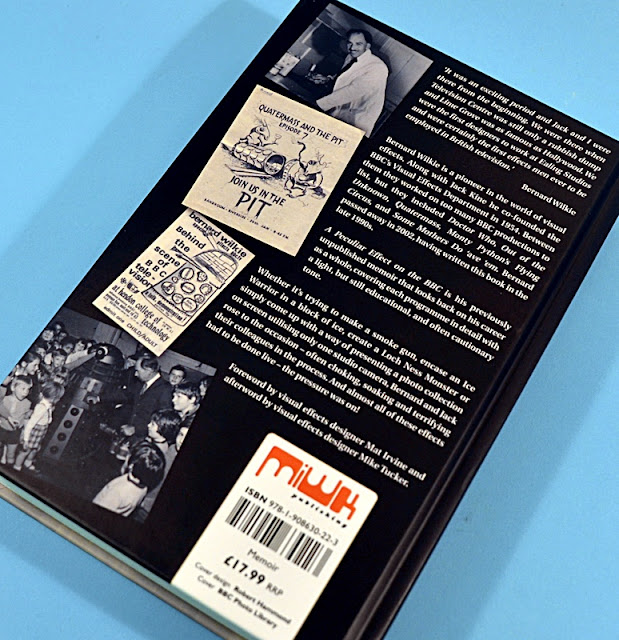 Publication has come about due to the efforts of Bernard’s older son, Martin, and Matthew West of Miwk Publishing, who took Bernard’s copious notes, and compiled them to form A Peculiar Effect on the BBC.

I was fortunate enough to work with Bernard when I joined the BBC, and was honoured to be asked to write the foreword for A Peculiar Effect on the BBC.  My old friend and colleague (and co-author of BBC VFX) Mike Tucker, provided the afterword.

A Peculiar Effect on the BBC is the sort of book you can dip in and out of at will. The chapters are mostly short and in chronological order. It starts when Bernard, aged eight, was given a box of conjuring tricks, which may have started him on the road to what eventually became the BBC VFX Department. But before this he went through amateur dramatics and British National Service, before joining the BBC experimental engineering department.

During his early years at the BBC, Bernard met scenic artist Jack Kine, and formed a two-man crew initially called Scenic Effects. This later became the Visual Effects Department proper, and the rest, as they say, is effects history. From this modest start, BBC Visual Effects became, for a time, the largest ‘special effects company’ in the world.

Initially, both Bernard and Jack worked on the programmes, mainly building educational models and making end-captions for light-entertainment shows. The department grew and grew, taking on more staff, and while Jack seemed content as manager, Bernard continued working on programmes.

A Peculiar Effect on the BBC chronicles anecdotes about working on such classic shows as the early Quatermass science fiction stories, 1984, Running Wild (the first TV outing for the comedy duo Morecambe and Wise), Dave Allen at Large, Some Mothers Do 'Ave 'Em, and of course, Doctor Who.

One thing the book lacks is a photo section. There are few on the covers, but that's it. So for interest's sake, here is a selection from my own files.

When Jack Kine retired, he sent this letter (below) to Bernard Wilkie. 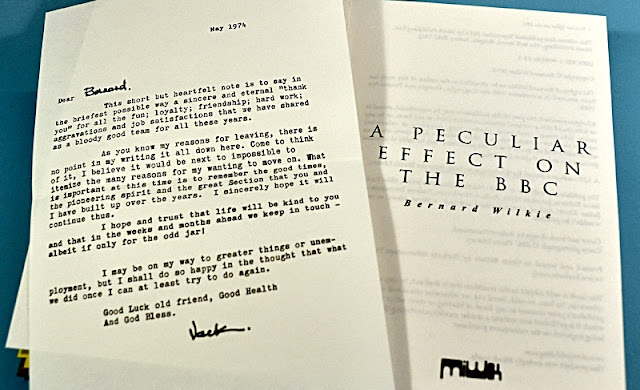 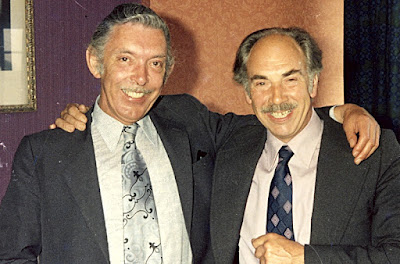 The uncropped cover pic (below) for A Peculiar Effect on the BBC shows Bernard setting up model ships for an educational programme on the Spanish Armada. 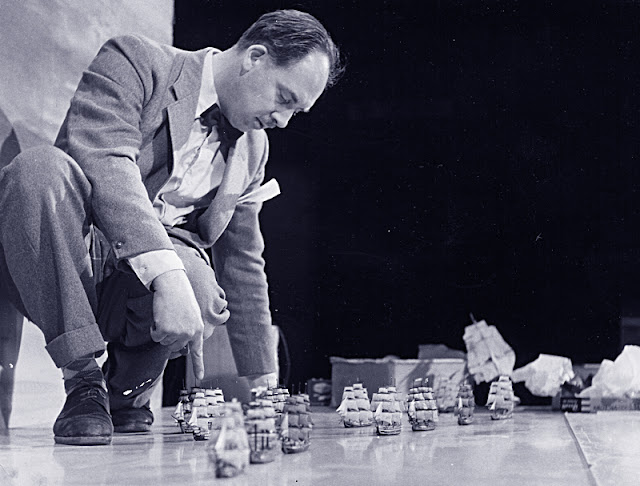 Bernard with a model spaceship (below) as used in a Jon Pertwee-era Doctor Who. 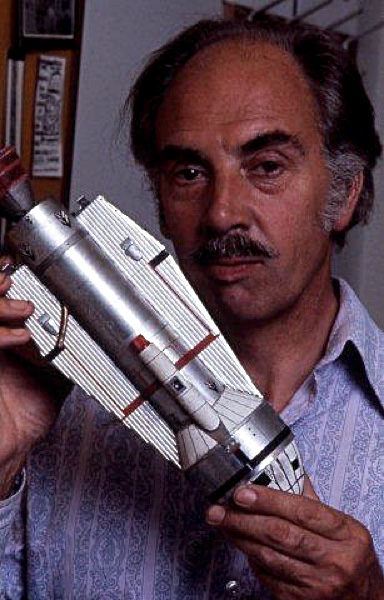 Bernard with a model aircraft (below) probably taken in the early 1960s. 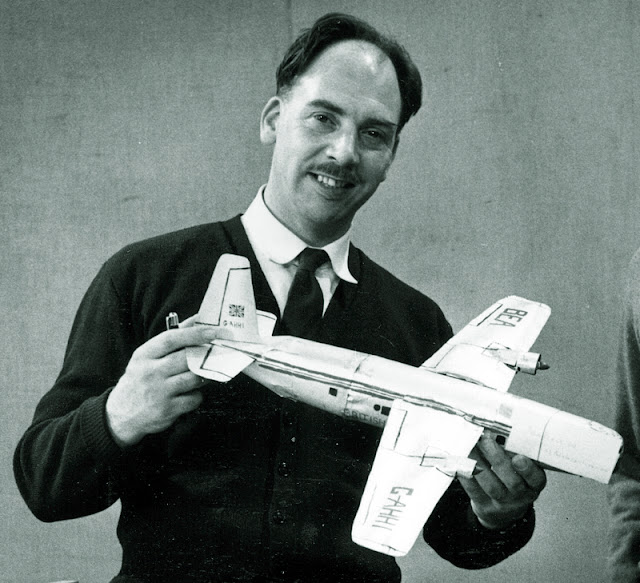 Bernard with (below) his DAF 55, a car he used for many years. The little DAF is loaded with props for a filming session of the TV show 'Dave Allen at Large.' 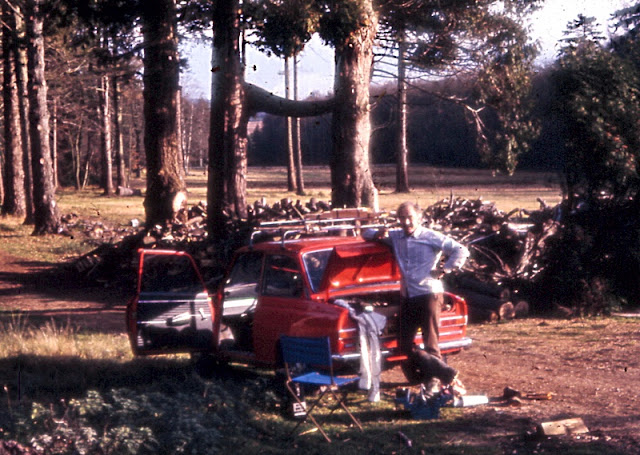 The science fiction series Quatermass 1, 2 and 3 were made in the 1950s, but the BBC started a fourth Quatermass in the 1970s, and some model work was done for this. Bernard (below right) is seen with Ian Scoones and a large specially-made space station model. The story was eventually made by Euston Films for ITV a few years later; there is more info in the Irvine-Tucker BBC VFX book. 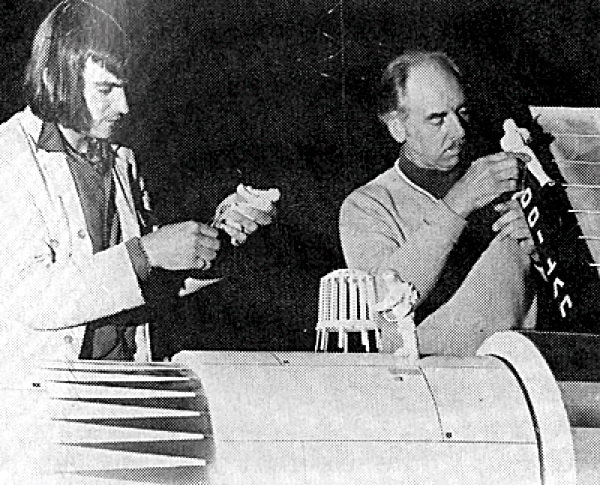 A model spacecraft (below) from the fourth Quatermass production. 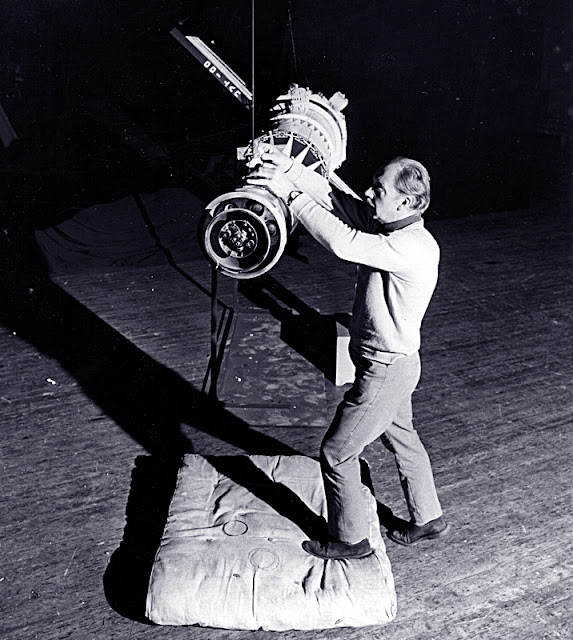 Bernard with a small Tardis model (below) used in the Doctor Who story The Frontier in Space. 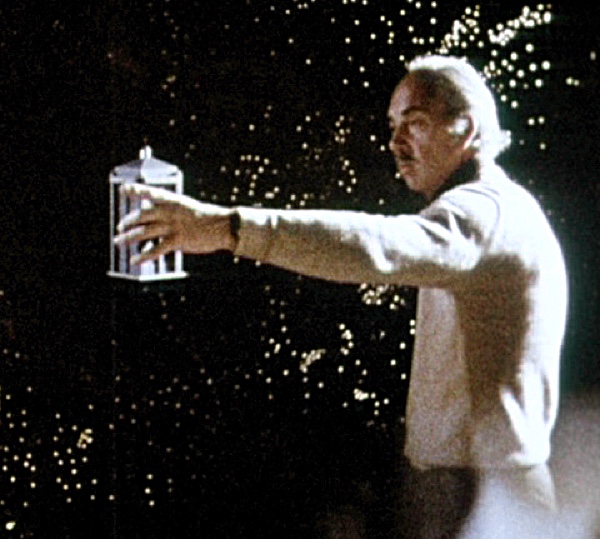 Bernard (left below) during miniature filming for The Frontier in Space. 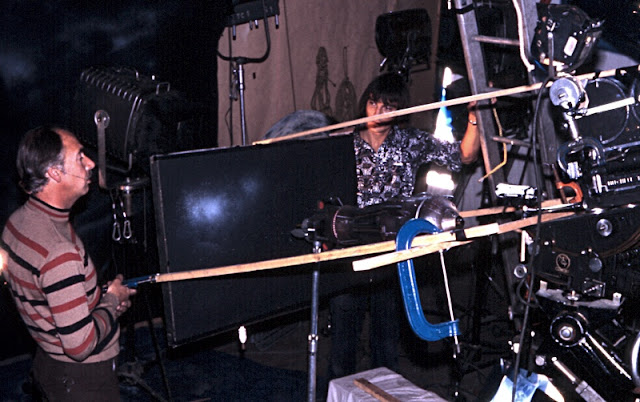 Bernard poses with an outside toilet shed (below) that will soon explode, from an episode of the TV show 'Dave Allen at Large.' 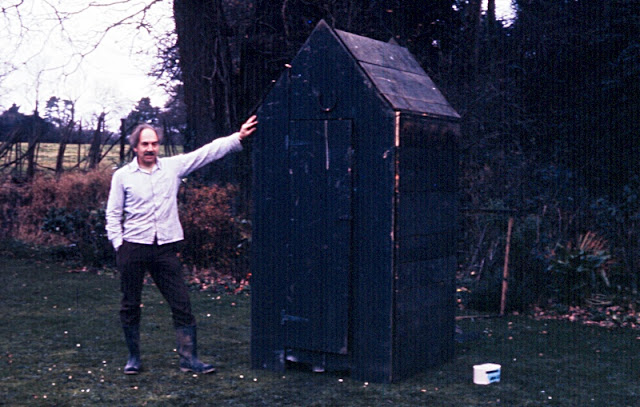 Bernard posing with an airbrush (below) a photo that is also on the back page of A Peculiar Effect on the BBC. 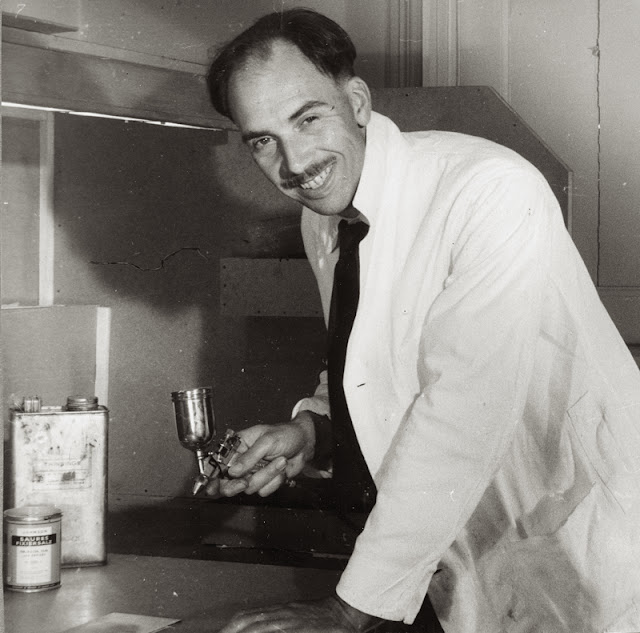