NOW AND AGAIN, IT’S GOOD to put a model together that doesn’t involve hundreds of parts, hours of painting, and a decal sheet the size of a small country.

Mat Irvine: Enter the Revell Snap Tite kit of the 2014 Corvette Stingray. This is intended for ‘junior’ modellers (whoever they are) and straight out of the box, this Vette can be snapped together in half an hour, perhaps even less. Inside the box are a detailed body, interior and chassis pans, wheels and tyres, and a set of peel-off decals. You don’t get an opening hood, a separate engine or chassis parts, though of course you can add more detail  if you wish.

The box (below) contains a body in yellow, with other parts in black, chrome, clear and translucent red. 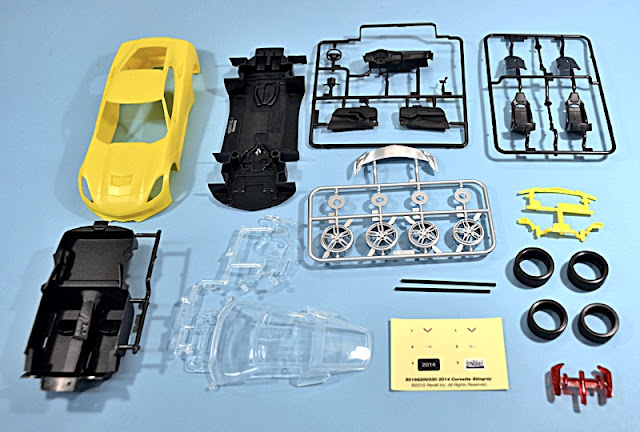 Sub-assemblies (below) show the interior with seats and instrument panel fitted. The window glass has had black trim applied. 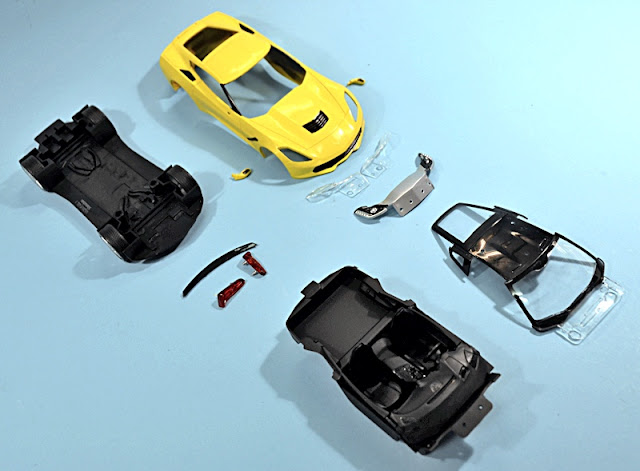 The Revell 2014 Corvette Stingray kit is moulded in yellow, a stock Corvette shade, but when I came to the build I overpainted it in the recently reintroduced Humbrol Matt Trainer Yellow. This shade is one of the new acrylic range as an undercoat, and I finished the Vette with a top coat of Humbrol Gloss Yellow 69. The result is a deep and lustrous finish that is much better to look at than plain yellow plastic.

Comparing the kit body (below) to images of the full-size cars. Note the rear views show the black rear panels, which is how the kit was finished. 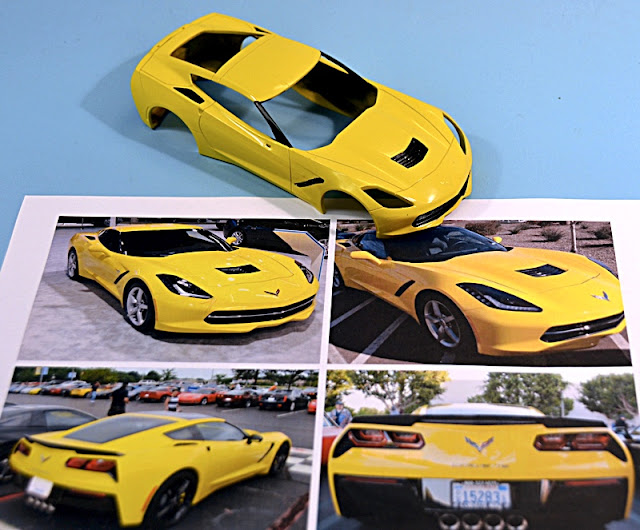 The interior and chassis components are moulded in black, but I painted various shades of black - matt in places, satin in others - to bring out detail. The window glass components needed their inside edges painted in satin black, and as these areas are etched into the plastic, they can be hand-painted - if you have a steady hand! An alternative is to mask all components for hand painting or spraying.

Using one of the peel-off licence plates (below). 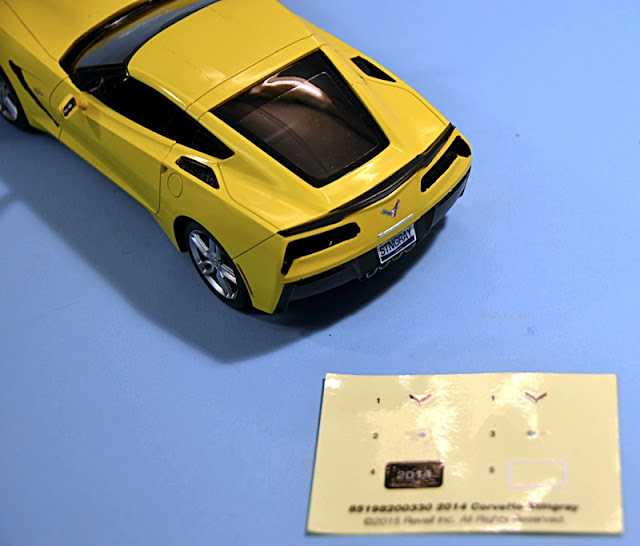 The rear spoiler is either body colour, or some photos of full-size cars show it in black. Note that the centre-mounted stop lamp is not red. These lamps are now LEDs, which when unlit are a neutral ‘glass’ or silver colour. The same applies to the front indicator lights in the headlamp assemblies, though the running lights built into the front and rear fender edges are, respectively, orange and red. All the inset grilles are black, and the rear panel is - like the spoiler - either body colour or black. The only touch of brightness in this area is the exhaust pipe group.

The box (below) for the Revell 2014 Corvette Stingray uses the Monogram Snap Tite logo. 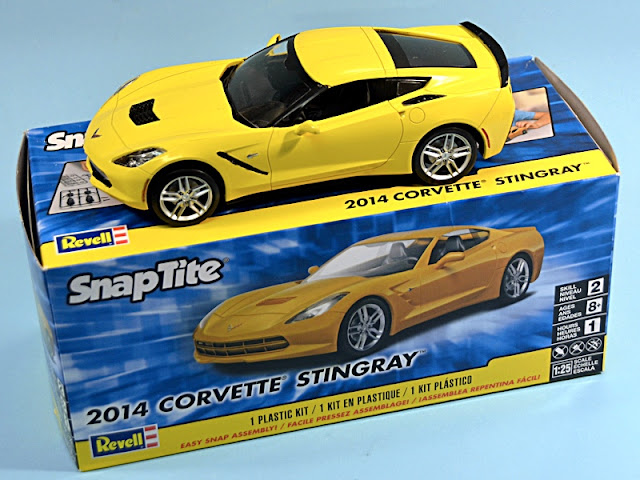 The 2014’s Corvette grille had a chrome centre bar, which is the only real opportunity to add a shine with a touch of BareMetal Foil. Unfortunately the Corvette has no waterslide decals, instead being the peel off/stick on variety that are usually supplied in Snap Tite kits. However Corvette badges can be set off with BareMetal Foil instead if you wish, although with the CORVETTE lettering at the rear, foil or paint have to be used, as there is no decal on the sheet. The peel-off decal approach is fine for the licence plates, of which you get two options. 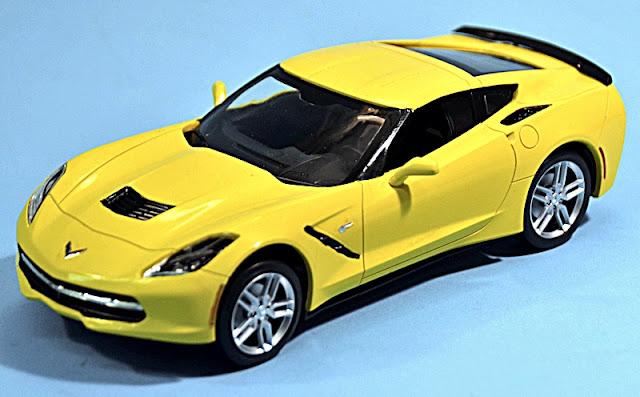 Slip the vinyl tyres onto the satin-chrome plated wheels, push them onto the axles, while adding the plated disc brakes as you go, and that’s it - the Revell Chevrolet 2014 Corvette is complete. 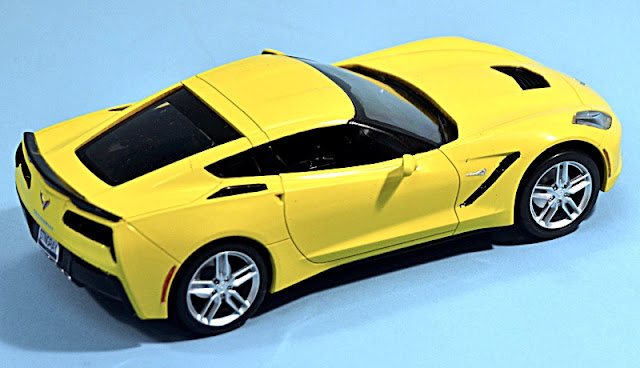 The rear lamp clusters are moulded in translucent red (Stop lamps are universally red, but US cars can have either red or amber rear turn signals - the Corvette remains red) but the edges of the whole cluster are satin black. 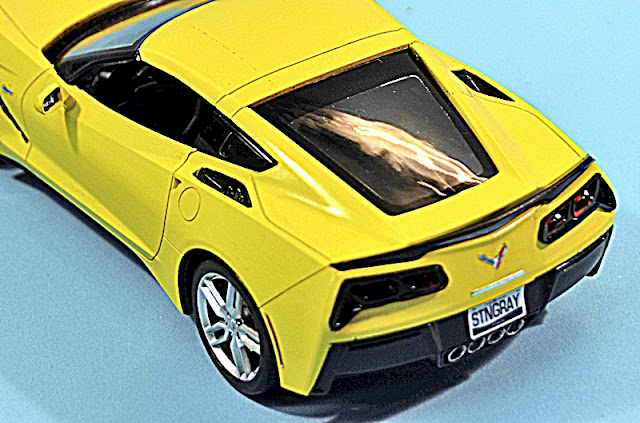 Summation
An easy to build kit that is also quick to assemble. Overspraying the body in coats of primer and gloss yellow improved the finish, though it’s not strictly necessary.

About the real thing
2014 was the first production year of the seventh-generation C-7 Corvette, and a reintroduction of the Stingray name, not used since 1976. It first appeared in 1963 on the classic split rear-window C-2 Corvette Sting Ray, spelled at that time as two words. With the first Corvette being released in 1953, the car is now 62 years old, making it the world’s longest-running sports car in continuous production.

Porsche, Ferrari and Jaguar may be older marques, but they have made many varieties of cars. At any time there has only ever been one Corvette.

SMN note: A nice kit, but why Revell produces such a crude box design (as Airfix does with similar kits) is hard to comprehend. The image and typography shout cheap and nasty, just the opposite of the surprisingly good results that the kit can provide.