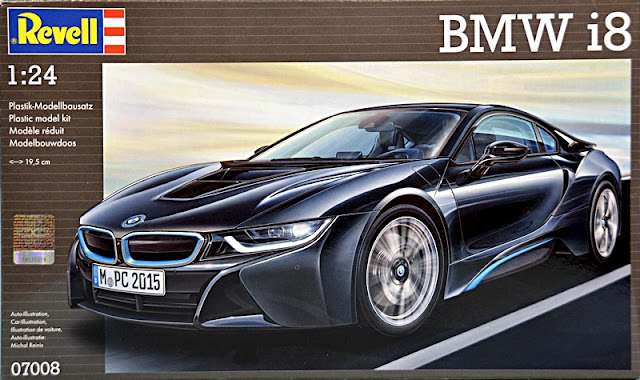 REVELL GERMANY HAS PRODUCED THE FIRST model kit of the BMW i8 hybrid petrol-electric car. The kit includes both drive motors and drivetrain in detail.

Mat Irvine: However, there is a proviso in that once the model is completed you can’t see them. The front bonnet doesn’t lift, and although the rear hatch does so, the petrol engine is hidden under another cover. Looking underneath doesn’t help either, as there is a complete full-length body pan. But still it’s nice to know they are there.

Side panel of box (below) includes reference closeups of the assembled and finished kit. 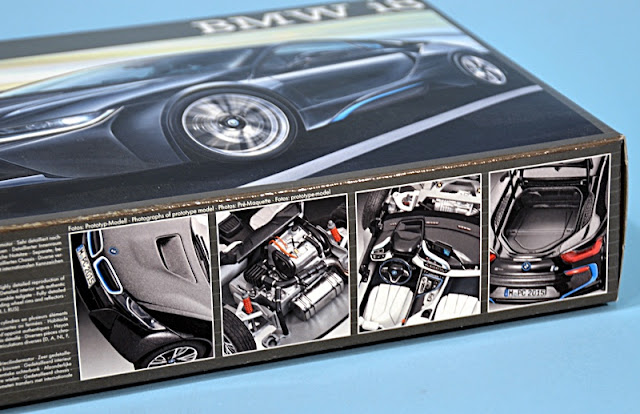 Neatly pressed components (below) laid out. There are no serious fit or finish issues, although assembly takes time and care. 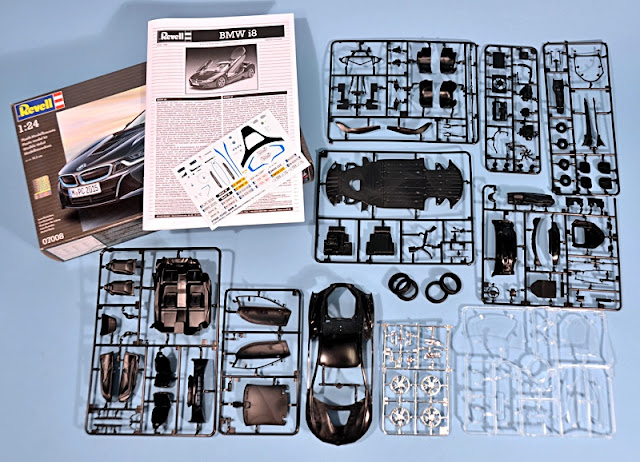 The BMW i8 is a complex car, and that’s reflected by the complexity of this kit. The body design doesn’t exactly allow for a conventional one-piece moulding, and even though kits having separate front and rear pans are increasingly common, in the BMW i8 kit they are not only separate, but each also has an insert.

Revell supplies four floorpan components, and two separate ‘spoilers’ that fit either side of the rear hatch. The doors are separate parts too. In the real car, they swing upward to open, though with the kit you have to decide whether to display them up or down.

Some complex masking is required (below) if you decide to go for a two-tone finish. 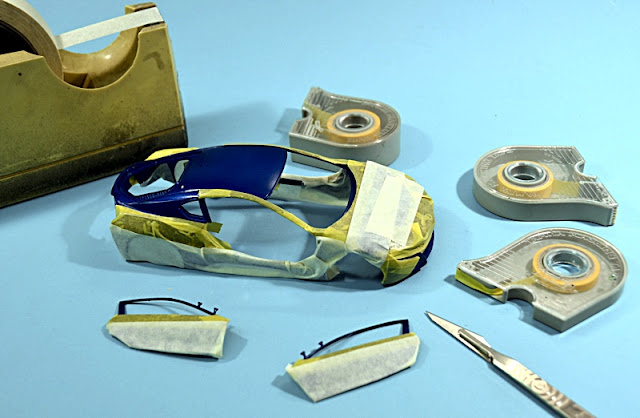 Some of the references used (below) for the exterior, interior and engines. 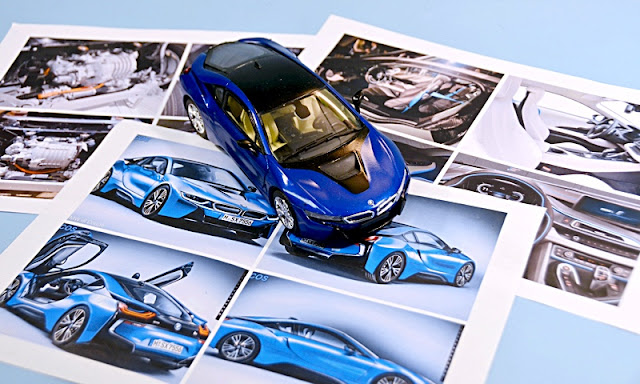 The ‘side spoiler’ parts (below) need painting separately from the rest of the bodywork. 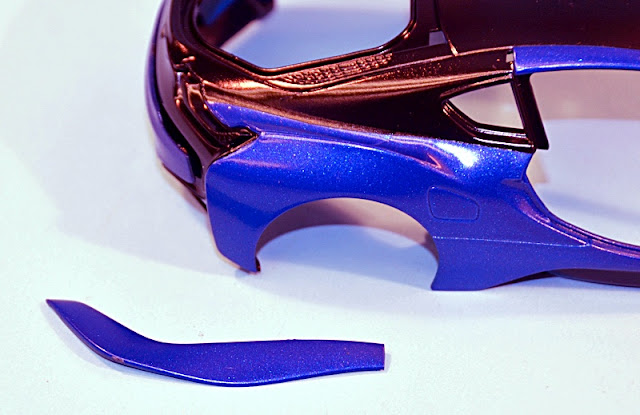 The two engines fitted to the floorpan (below), electric motor at the left, internal combustion engine at right. When you've got this far, you'll need to a take good look, as you won’t be able to see them after the body has been cemented in place. 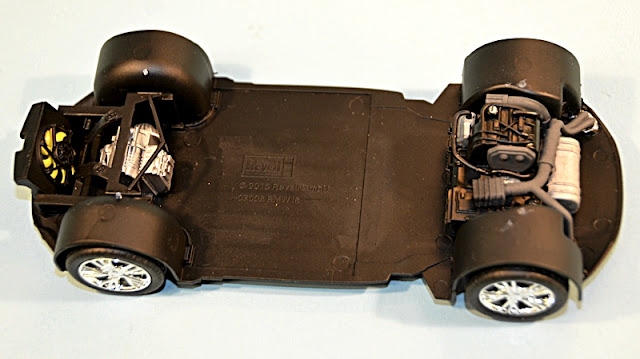 The cabin interior is also quite complex, and decisions have to be taken as to what colour scheme you use. The instructions give just one choice, based primarily around grey, beige and black, though my web search revealed a host of options. The same applies to the exterior finish. Revell goes conveniently for black, but I found a rather striking - and appropriate - electric-blue i8 online, so that was the scheme I chose to use for this build. However, even with this, much of the car is still in black. 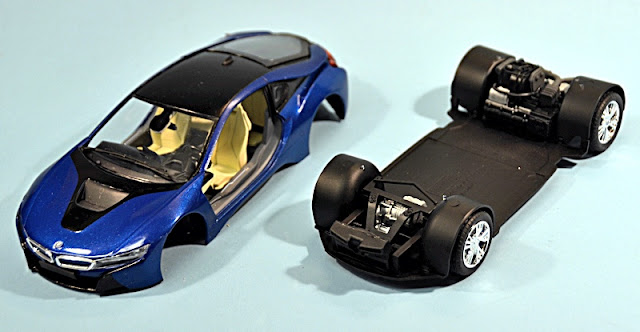 Finished body and powertrain (above) look good when completed. There's perhaps a case with the i8 for making two kits, so you can show one as an inside-information display. 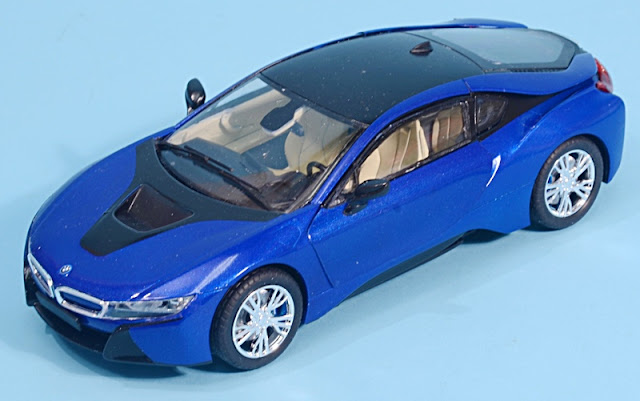 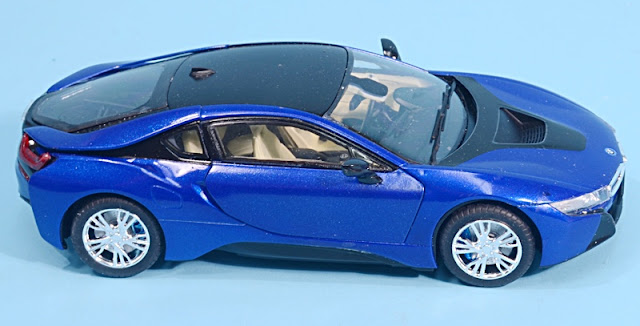 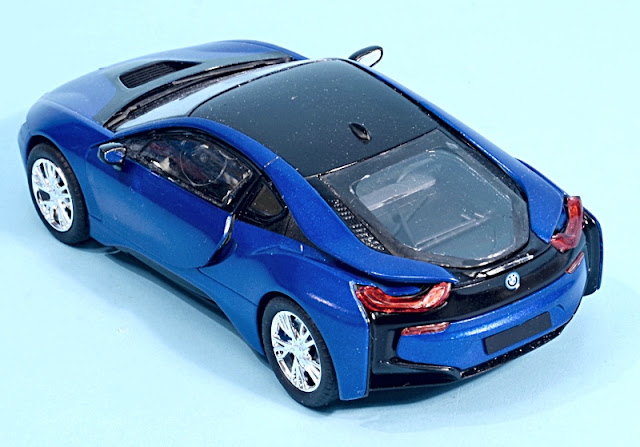 About the real thing
The BMW i8 is a hybrid vehicle, powered by a twin-turbo, three-cylinder 1.5 litre petrol engine at the rear of the car. This drives the rear wheels, while the front wheels are powered by a 96 kw/131 bhp electric motor. Seen in the metal, the car looks a lot more unusual than it seems here. Parked next to other cars, it looks like a science-fiction machine that’s travelled back in time from the future.  Track pic (below) courtesy Edvvc from London, UK.

Summation
Overall, this is not an easy or straightforward kit to build. But at the end, your effort will result in a model of a unique vehicle, and one that will be well worth adding to the display shelf.