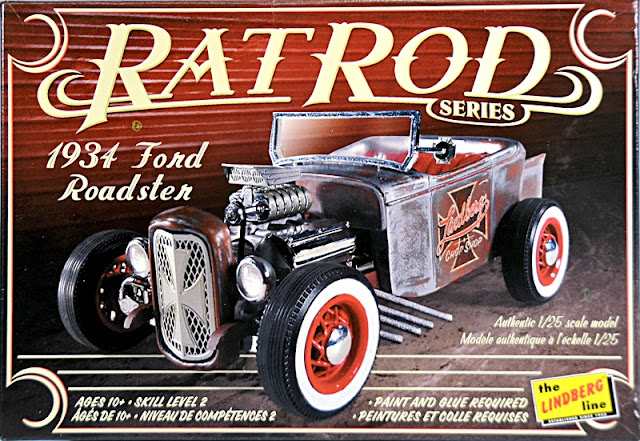 HAVING ACQUIRED THE LINDBERG AND HAWK BRANDS, new owner Round 2 has been taking a look at the whole back catalogue to see what can be done, especially with some of the older kits.

Mat Irvine: Lindberg cars are split roughly into pre- and post-1990s. Previous owner of Lindberg, the Craft House Corporation, toyed unsuccessfully with 1:20 scale, then moved into 1:25 scale with new-tool kits. These certainly were a success, definitely coming up to the standard expected from the likes of Revell and AMT.

Previously, Lindberg cars were not, to be kind, some of the best model kits ever made. In fact, I’ve commented before that some of these Lindberg car kits would make pretty good Rat Rods. So what was the subject of a recent reissue? Ironically, this Ford Roadster Rat Rod, representing a real-life car that was built to be as grimy and dirty as possible. 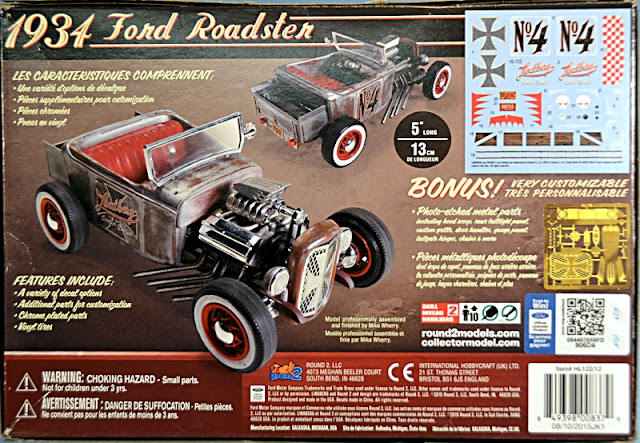 This Round 2 reissue is a 1934 (actually, 1932) Ford Hot Rod, now intended to be built as a Rat Rod. Instead of the usual custom car conventions - high gloss paint, colourful decals and highly polished chrome - this Rat Rod is just the opposite, the grimier the better.

The box base and side panel (above, below) provide more assembled model details. 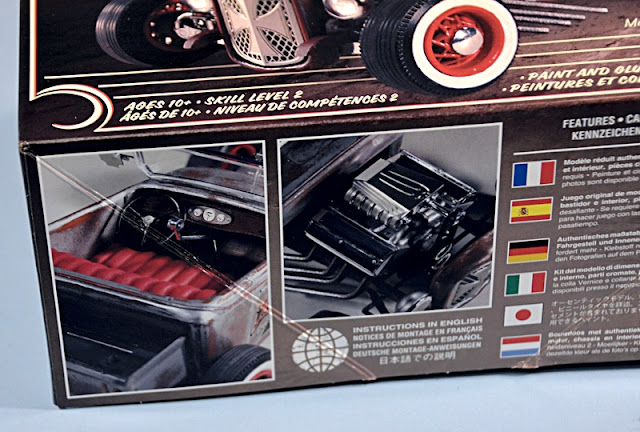 The Round 2 kit includes all the original components, including fenders and parts for alternative rear decks - a pickup in two sizes, and a turtle, named as it vaguely resembles the curved carapace of the reptile. Also included are new decals, and a photo-etch brass sheet with new parts. 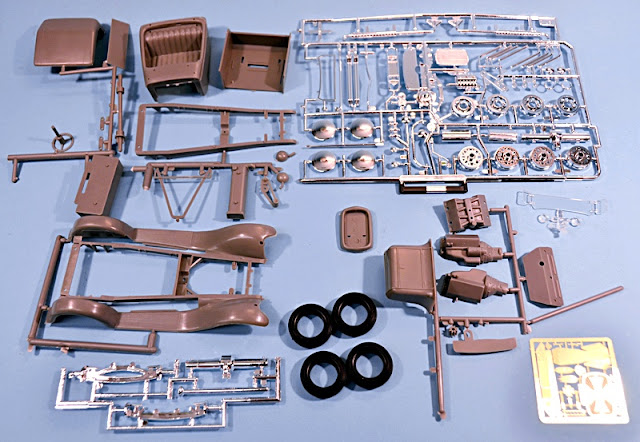 Clear instructions and a decal sheet (below) are provided. 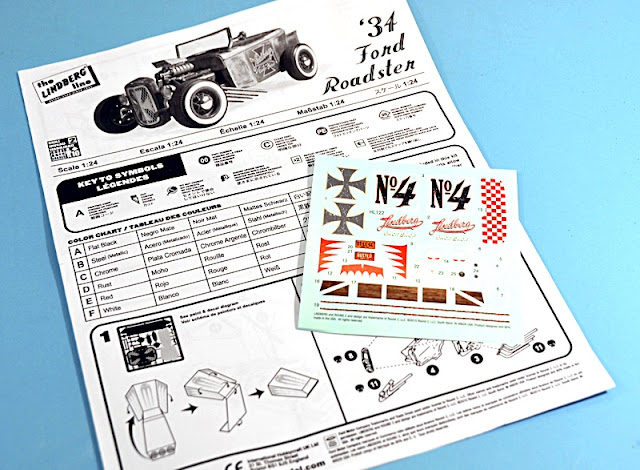 The rules about building a Rat Rod are that there are no rules, basically do what you want. However to get this review kit built, I had to start somewhere. Fenders are not usually part of the Rat Rod world, although if there are no rules, there’s no reason why they can’t be. However, I omitted them and instead chose the short pickup bed, with fuel tank fitted inside.

Some subassemblies (below). Note that a set of fenders (right) is included, as are alternative rear body sections. It’s your choice, so just pick and choose. 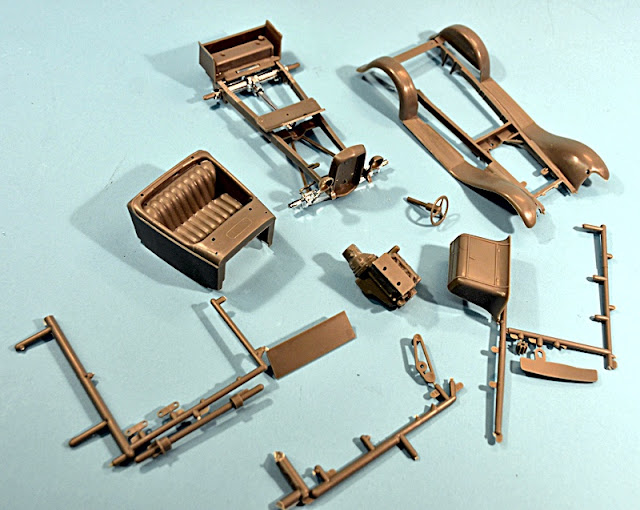 There’s also a photo-etch part for the rear light cluster and a new grille insert, with the Maltese Cross that appears on many Rat Rods. Some of the decals also echo this shape, with a dealership name that can be applied on top. Wheels are stock wires, married to modern tyres. Four polished Moon discs are also supplied.

Rear of the pickup section (below) with brown paint applied. The photo-etch hinges, chains and rear-lamp section have not yet been painted. 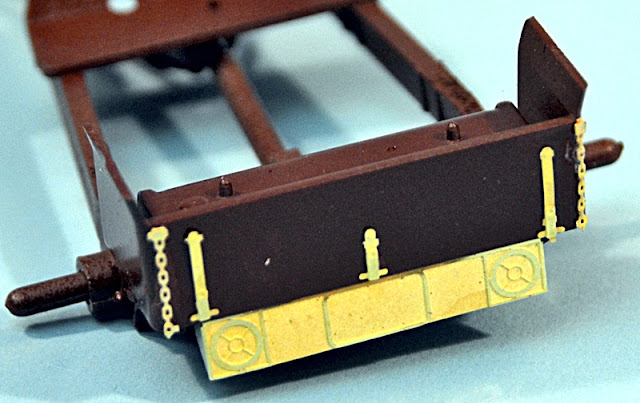 In the build shown here, all the parts came from the kit itself, but as with any Rat Rod - model or full size - you can pick and choose whatever components you wish to use. Some of the more usual modifications would be a swap to yet a different engine, or a change of wheels, perhaps a set of drag slicks at the rear.

Chassis (below) with the supplied short pickup bed installed. 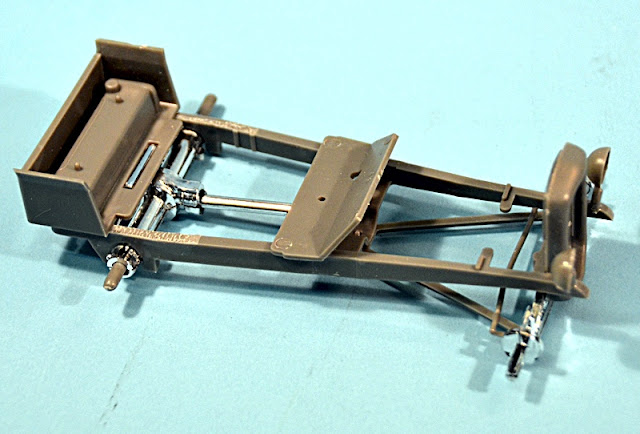 There is one basic engine block (below) which is a modern (well, more so than 1934) mill. It is not brilliantly detailed, but looks like a Chrysler hemi-head. There’s a blower (supercharger) on top, with the option of exposed carburettors or a new air scoop, made from a photo-etch part. 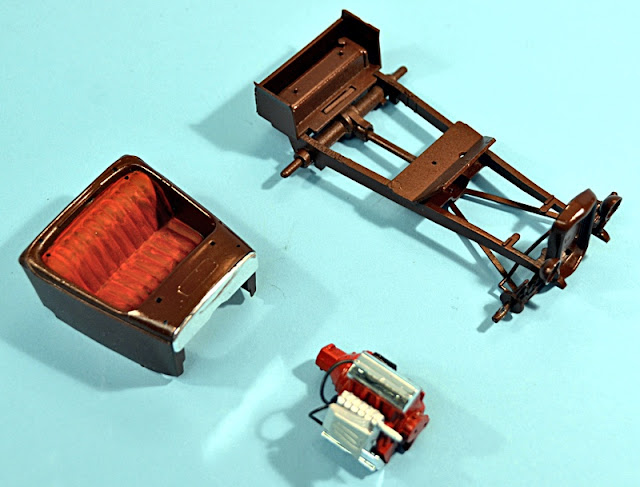 Some details are given in the kit as to the final dirtying down, though much will be down to personal preference. Here, I sprayed the engine block and wheels in Humbrol gloss red (though I didn’t pay too much attention to the ‘gloss’), while the interior seat was painted matt red.

Wheel assemblies (below). Note that the small Moon discs are supplied, as are larger versions. 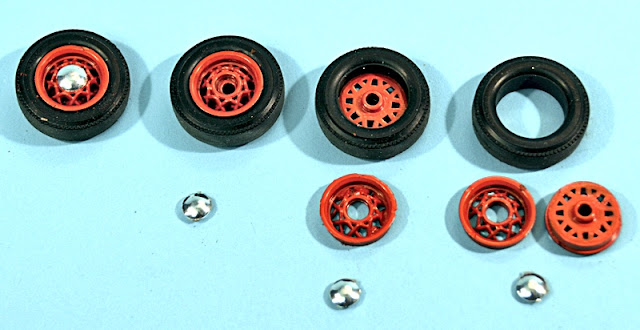 The main body panels ended up gloss brown, sprayed with Testers aerosol. The exhaust headers are dirty bronze, while I oversprayed the blower and scoop with Humbrol Aluminium. I used a selection of the supplied decals and, when thoroughly dry, I added various smudges of dry-brushed aluminium and similar shades. 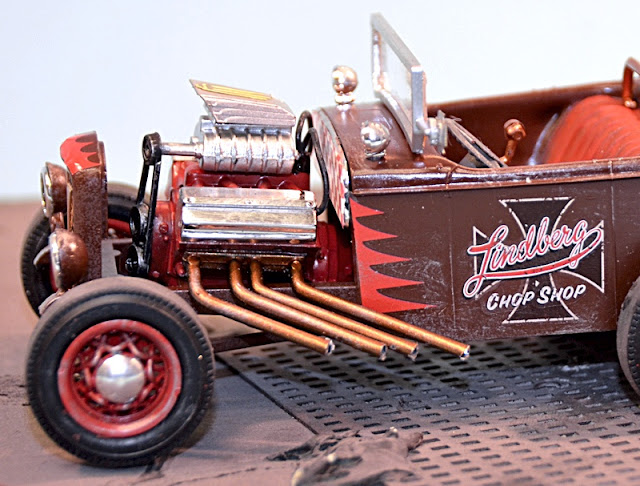 The completed and weathered model (above, below) shown parked on the suitably grimy display base I constructed. 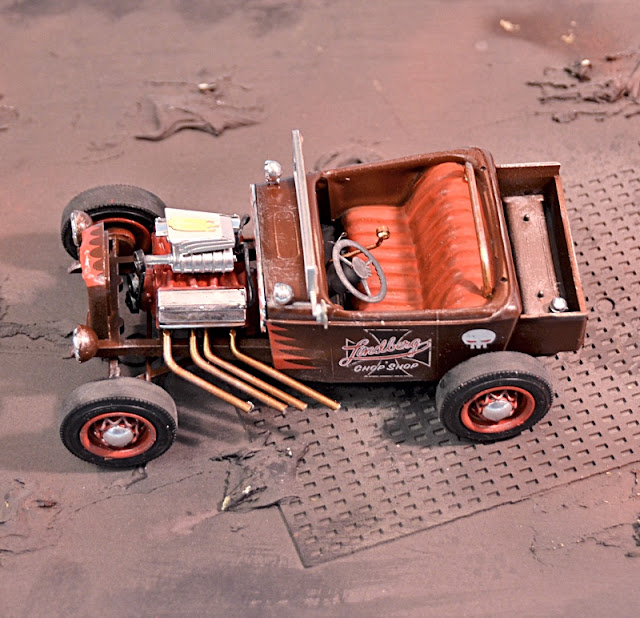 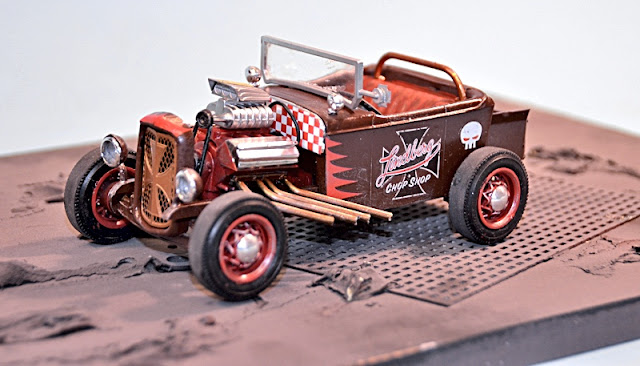 The spares in the kit came in useful when I created the scrapyard scene (below). The casual figure is a white-metal item that came from the long-gone British company, Tyresmoke. 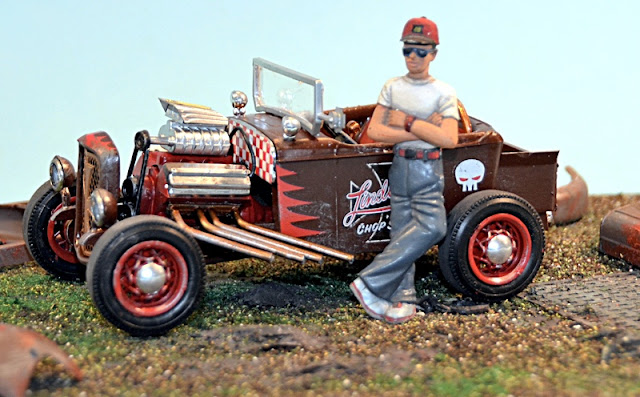 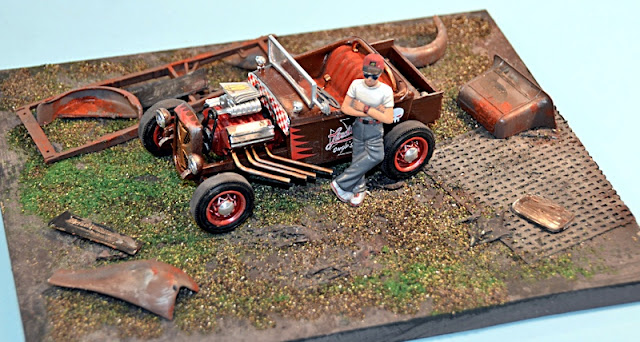 The spare fender assembly (below) can be cut into separate components. You can get four fenders, two running boards, and chassis rails out of this one part! 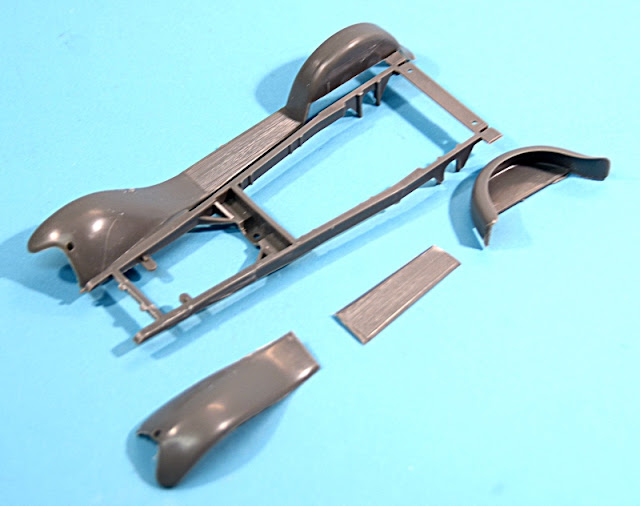 There are plenty of other punk-style finishes you could apply of course. Rust is one, and special kits are available for this.

To see a range of finishing materials, visit the modelling tools website.

For more on applying dirt and grime, and building a different Rat Rod, see my book Scale Car Modelling. It’s available in both hardcopy and ebook editions. 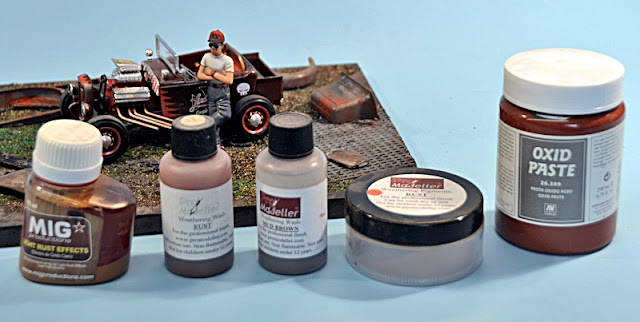 The last issue of this kit (below) dates from 1986, near the end of the original Lindberg company. The kit featured none of the new Rat Rod additions. 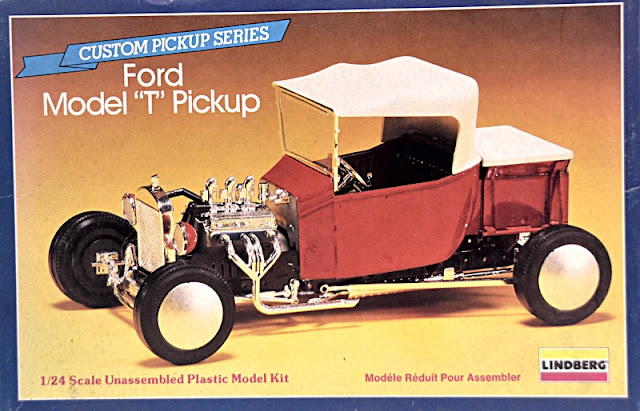