THE FUTURE OF DRIVING IS ELECTRIC, or at least that's how companies like Tesla and BMW see it. And now they are joined by this droolworthy delight from Morgan in the UK.


SMN report: Not that you can buy a kit of the Morgan EV3 - yet. But there are kits and collectibles available of the ultra-traditional hangovers from a golden age made by Morgan.

The all-electric Morgan EV3 can accelerate from 0-60 mph in nine seconds, and can reach a top speed of 90 mph-plus. Just as importantly, despite its diminutive size, the battery pack gives it reasonable legs - the EV3 is claimed to have a range of some 150 miles on a single charge.

The SMN view? Morgan's EV3 looks fantastic, and that off-centre headlight is weird but wonderful.

There aren't too many Morgan kits around, though the Minicraft 1935 three-wheeler (below) is attractive, even if the 1:16 scale is a slightly odd choice. However, it would fit into a collection of 1:18 diecast ready-builts without any real misgivings. 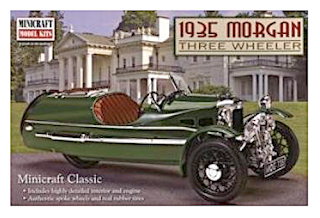 The Bburago 1:18 scale Morgan Aero 8 (below) is a good rendering of this slightly cross-eyed design. As ever with diecasts - particularly to this big scale - there's nothing to stop you turning a relatively cheap buy into an award-winning replica, especially as most of them are assembled with screws, so take to bits easily enough. You may need a hacksaw and metal file though, if you want to carry out major changes. 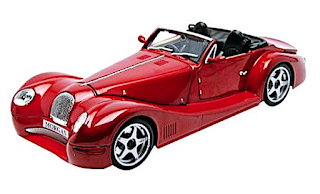 Bburago make other Morgans too, such as the Plus 4 (below). Another model that's worth looking for is the excellent Kyosho Morgan 4/4, also to 1:18 scale. This features various opening parts, plus an exquisitely detailed engine compartment. 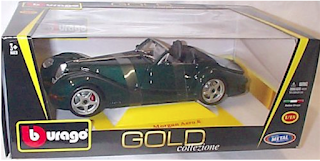