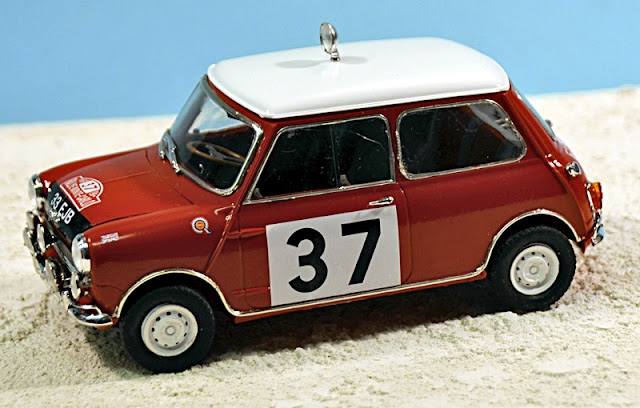 COMPARED TO THE CURRENT BMW MINI, the original (and many would say best) Mini is tiny, but that didn’t stop driver Paddy Hopkirk and navigator Henry Liddon achieving victory in the 1964 Monte Carlo Rally.

Mat Irvine: There have been model kits of the classic BMC Mini before, both Tamiya and Fujimi having made 1:24 scale rally Mini Coopers. However, neither of these represents this particular car, a Morris Mini Cooper S. Revell Germany already makes the basic Mini Cooper in racing form, so this kit is a modification.

The box-art (below) shows only one person inside, perhaps Paddy Hopkirk. But the painting was based on a contemporary photo, so is correctly depicted, at least for this particular occasion. 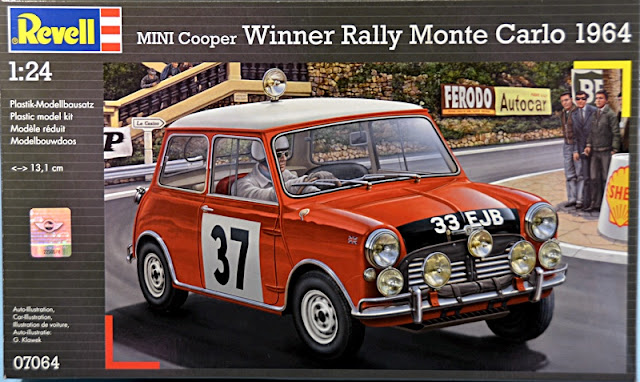 The Revell model is fully detailed, with a tiny BMC A-Series transverse front-drive engine under the bonnet, along with enough other bits and pieces to fill the bay. The model’s underside features separate front and rear sub-frames, with the front-drive set up, separate shock absorbers, and shields to protect the sump.


You get plenty of components (below). There are 146 in all, moulded in white, red, grey, transparent, and chrome-plated. 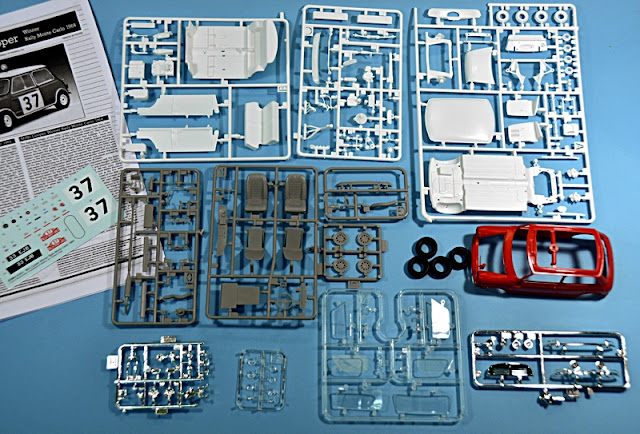 For the exterior, there is an array of lamps, five at the front, one on the roof, and one at the rear. What is perhaps not immediately apparent is that the two front spotlights occupy the spaces where the side light/indicators would normally be. These are still present, but have new positions nearer the bodywork edges.

The box side panels (below) show details of an assembled model, though some details have changed, such as both front seats being in black. 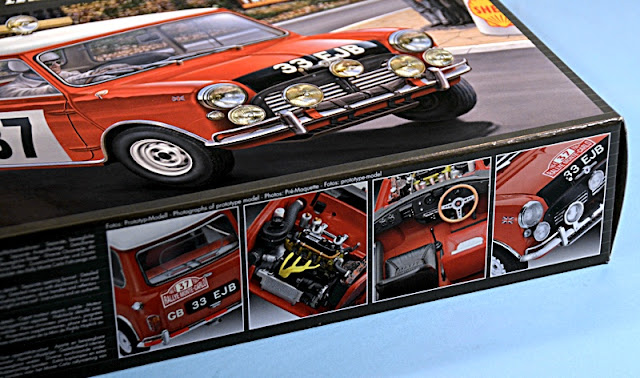 The interior of the 1964 rally winner was basically as factory-spec, the only racing concessions being rally seats and a new dashboard. Even the stock rear seat stayed in place, and there was no roll-cage. It’s a far cry from modern rally cars that are specially built from the ground up, and usually bear little resemblance to their stock versions.

Adding BareMetal Foil (below) to the windows. Note that the moulding for the chrome surrounds are built into the glass, rather than the bodywork, which is more usual. 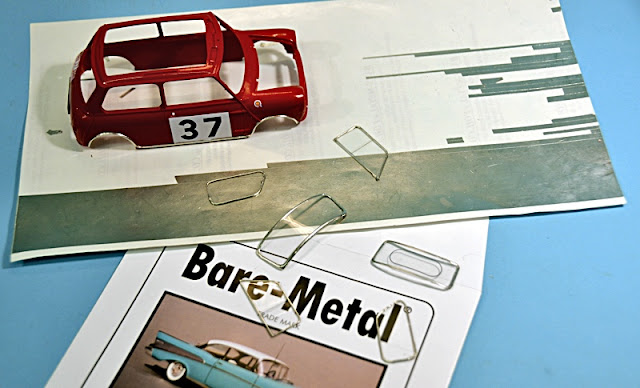 The Mini's body colour is of course bright red, with a white roof. The roof is fortunately a separately moulded part, making painting much easier, and both body and roof are moulded in appropriately coloured styrene. Painting instructions are for Revell’s own brand paints, though I used Humbrol acrylic Bright Red spray for the main bodywork.

The three sub-assemblies (below) shown assembled and pointed. They are now ready to be bought together.

Revell’s details are good, but my usual Internet search bought up images - contemporary and current - of the actual car, which shows some differences. These include the wheels which are listed in the instructions as red-orange (which matches a couple of full-size images) but the ones used for the Monte Carlo were almost certainly white. In addition, both driver and navigator seats were in black, whereas Revell indicates only the navigator’s seat in this shade, the driver’s being red and white.

The underside (below) is neatly detailed. Note that here, the underbody shields are not yet in position, so you can still see such as the gearbox/sump assembly. 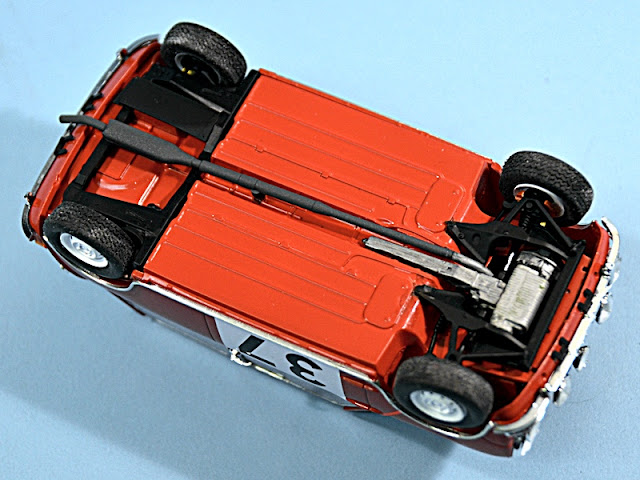 There’s a full decal sheet for all the markings, noting that some, such as the bonnet black panel, have to be applied before the licence plate. BareMetal Foil is a good solution to represent the window surrounds and external trim.

The finished model (above, below) on a suitably snow-covered base that I constructed for the purpose. 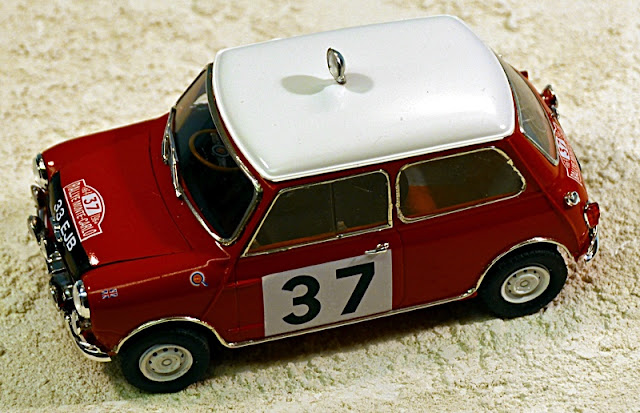 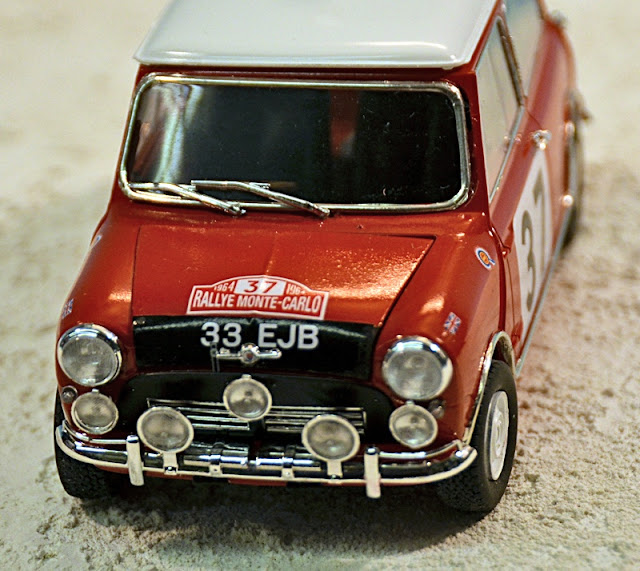 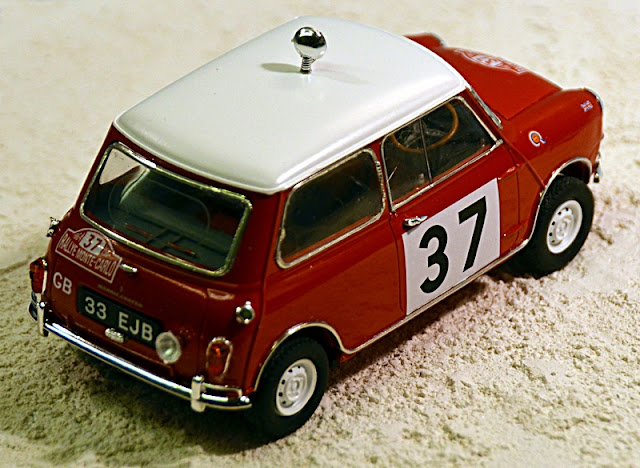 The winning team stand by their Mini (below) ready to receive the honours after their win. 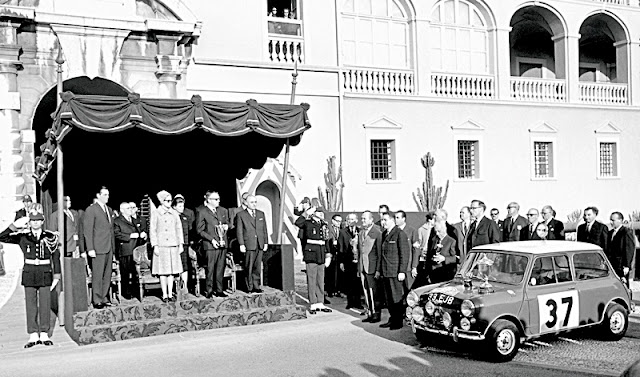 Summation
Overall, an excellent kit of the race version of a classic car, certainly one of the world’s most significant automobiles. My only complaint is - there are no figures! This one certainly cries out for miniatures of Hopkirk and Liddon, posed as they would have appeared while driving at full speed to victory.

Click the link for an interesting rally article at Auto Express.