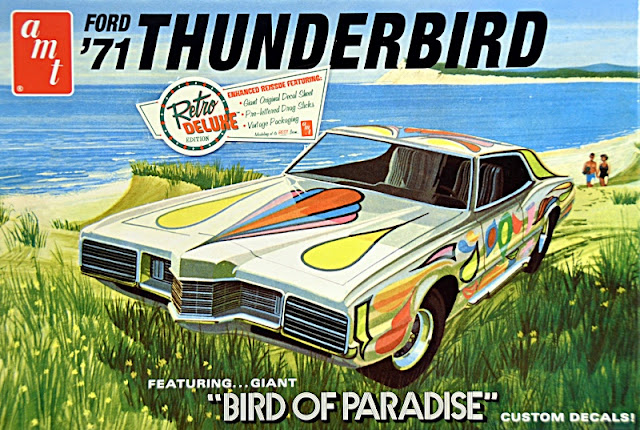 BACK IN 1971, FLOWER-POWER WAS STILL the thing. So branding the 1:25 scale AMT 1971 Ford Thunderbird as a ‘Bird of Paradise’ was obviously thought a good idea by the marketing gurus of the time. Now Round 2 have brought back the kit as a Retro De Luxe Edition ‘Enhanced Reissue,’ using the original box-art and ‘Giant Original Decal Sheet.’


Mat Irvine: The kit is one of AMT’s simplest. In fact, it was issued the previous year in the Motor City Stocker range, and these were, like the original ‘Annual’ kits from AMT a decade earlier, basically unassembled promotional (promo) models. They had a detailed body, but no separate engine block, with a one-piece chassis and metal axles.

The box art (header, below) is a reproduction of the original 1971 Annual kit. The ‘Retro Deluxe Edition’ sticker is on the shrink-wrap covering, so it leaves the box itself free of adhesive. You can build the kit in stock form, the side panel showing how this could look. 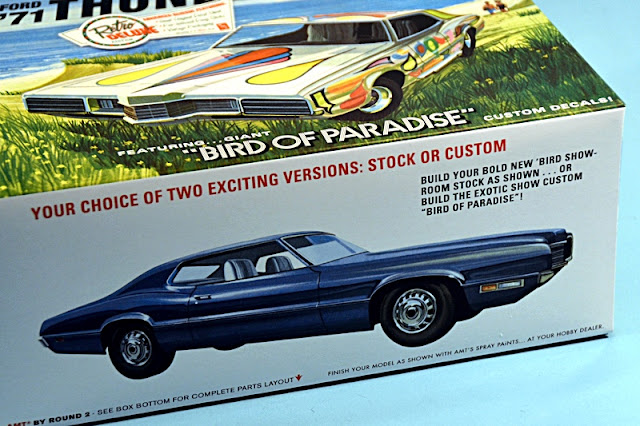 For this latest issue, an engine block is supplied, and there are some custom options, but these are the only additions. Actually, an ’engine filler piece’ is supplied, which fits into the chassis. This represents the oil pan and gearbox if you don’t want to fit the whole engine. Extra components in the box are a set of duplicate transparent components, one set moulded in clear, the other in transparent blue. 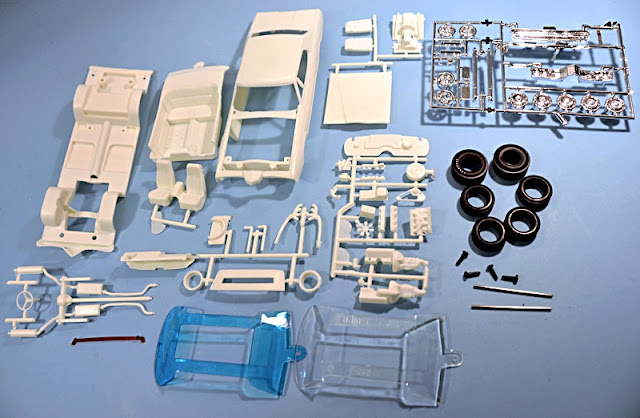 I painted the bodywork in light ivory, from PlastiCote. These are home-improvement paints, not usually associated with model-making, but they can work as well on models as they do in repainting an old vase!

The lower front and rear body pans are moulded into the chassis (below) which will need painting in the body colour. 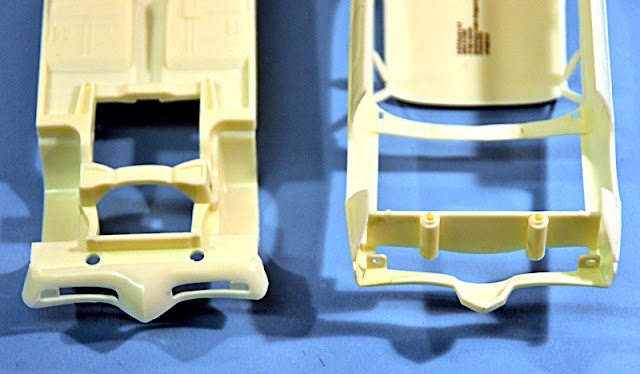 The Bird of Paradise is from the early 1970s, a time when chrome was all the rage, and I used BareMetal Foil for a realistic effect. Adding BareMetal Foil (below). Note the rear window insert has been used. 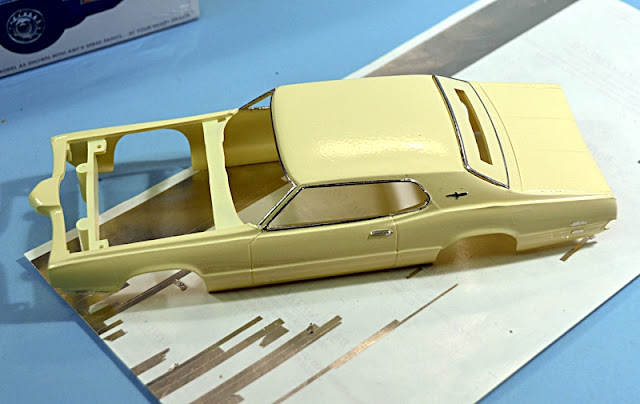 I finished the interior in pale blue, as I chose to use the supplied transparent blue windows. 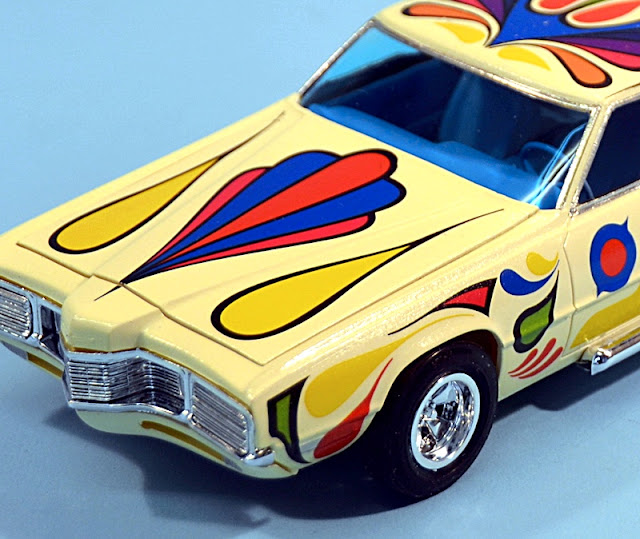 All the flower patterns on the large psychedelia-style ‘Bird of Paradise’ custom decals were applied and (below) you see the finished result - a Thunderbird of Paradise. 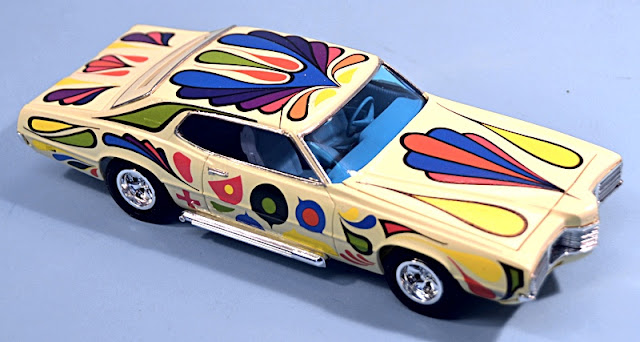 The kit supplies a very simplified engine block (below). Alternatively, you could just forget the engine and fit the hood in closed position. 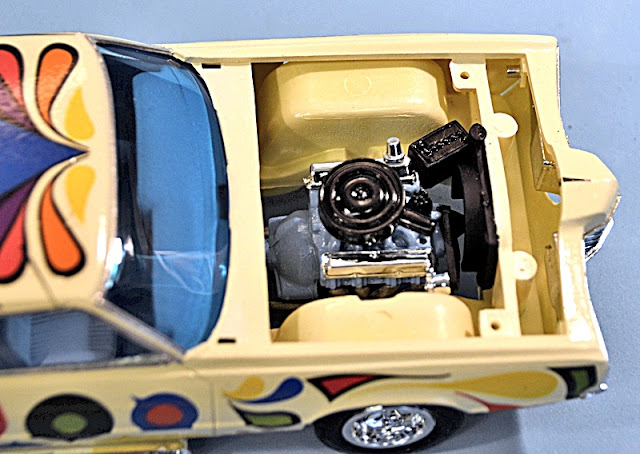 One of the kit features a custom, albeit a mild custom, so the underside (below) was painted the body colour. Note the stock exhausts have been removed. The supplied side pipes were used instead.

The model on an aftermarket display base, with built-in mirror to show off the underside. Not every kit benefits from this sort of treatment, but if there's something to look at down below, then a mirror like this doubles the viewing opportunities, especially useful for show displays. 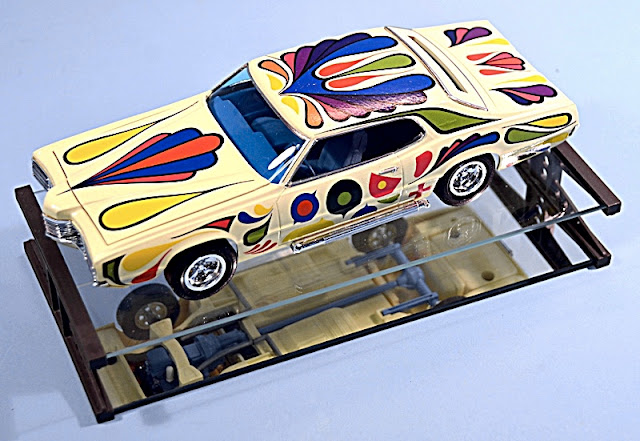 Summation
A simple but stylish kit, especially worth building for display if you are a 1970s-era nostalgia buff.

Review kit supplied by Round 2.