WE VISIT THE 2016 CHICAGO TOY SHOW 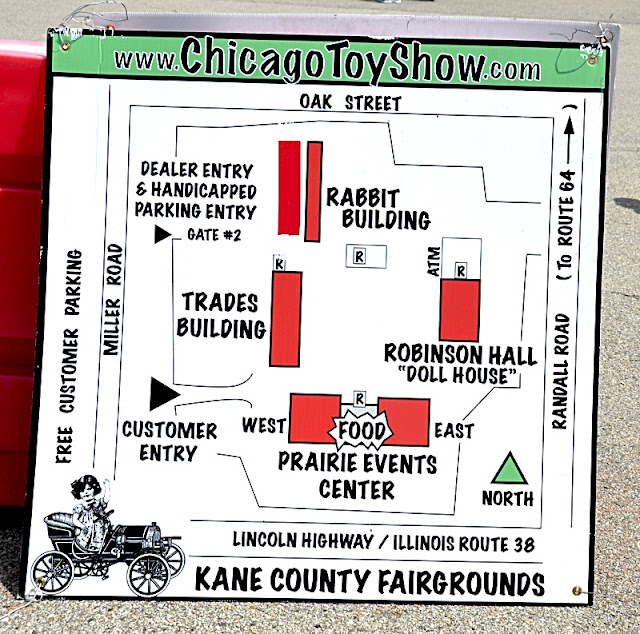 THE 2016 CHICAGO TOY SHOW was held on April 24, at the Kane County Fairgrounds, west of Chicago.


Mat Irvine: I went along with Dean Milano, kit historian and musician, and Jeff Clark, ex-Al's Hobbies of Elmhurst, Illinois, to see what we could find.

As usual at a show like this, there's little point in us asking each other, "What are you looking for?" as the reply can only be, "I'll know it when I see it..."

Housed in an array of indoor halls, and outside sheds that usually feature animals for sale, there was a liberal mixture of toys, dolls, games and some model kits. There was also a huge number of modern collectibles, especially from Star Wars.

A typical mix (below) of what you can expect to see at the Chicago Toy Show. There are a lot of toys, with some kits sandwiched in between. 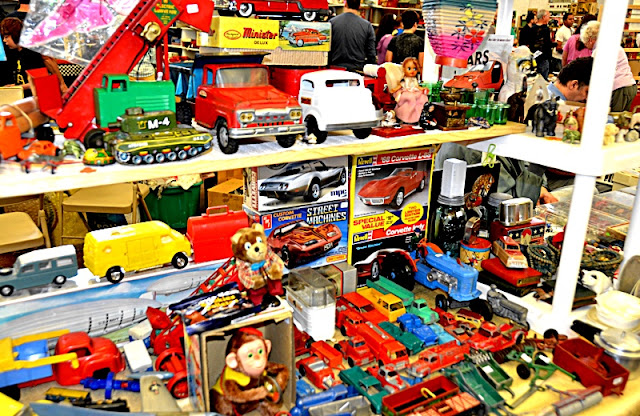 GI Joe in space (below) featured an Official Mercury Space Capsule and Authentic Space Suit, by Hasbro. On top of the two GI Joe items is a box containing an Aurora kit, the Armed Command Junk. 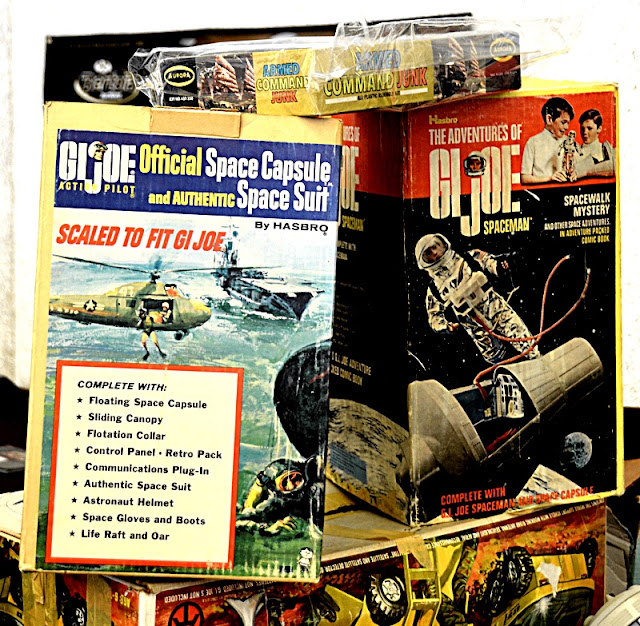 British miniatures were at the show (below) in the form of this selection of mainly Tri-ang toys, a name that was at its peak the years following World War II. At one point Tri-ang's owner, Lines Brothers, also had famous brands such as Dinky, Hornby and Meccano. 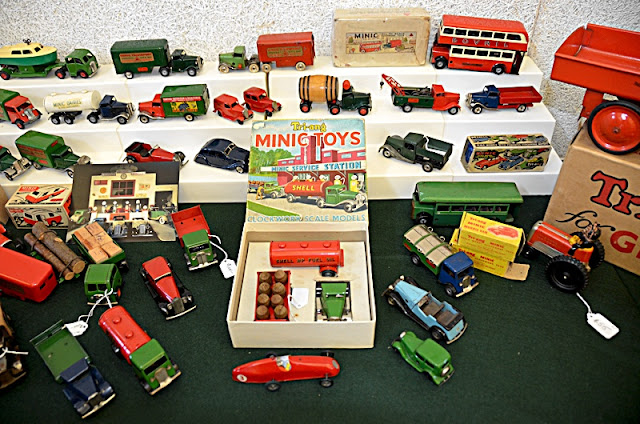 This Tri-ang tinplate truck (below) was one of many pressed steel products manufactured from the early 1930s to the mid-1970s. 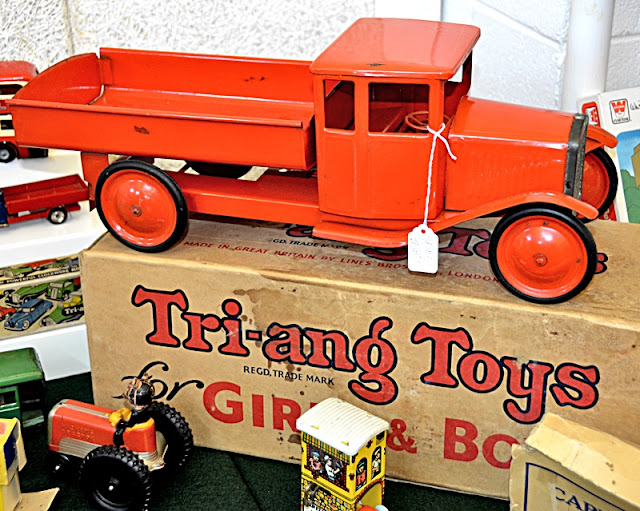 At what appeared to be around 1:32 scale, the model (below) of an experimental gas-turbine Ford truck was unusual and appealing. The real thing, named Big Red, was a 1964 experiment to see if turbines could replace diesel engines. High production and running costs killed the idea. 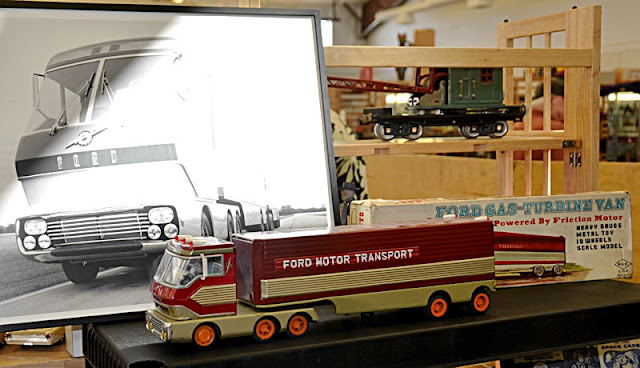 The forever unnamed Robot (below) from the Lost in Space TV series, seen here as a large radio-controlled toy, made by Transmasters. Out of the box, it stands two feet high, so is about 1:4 scale. 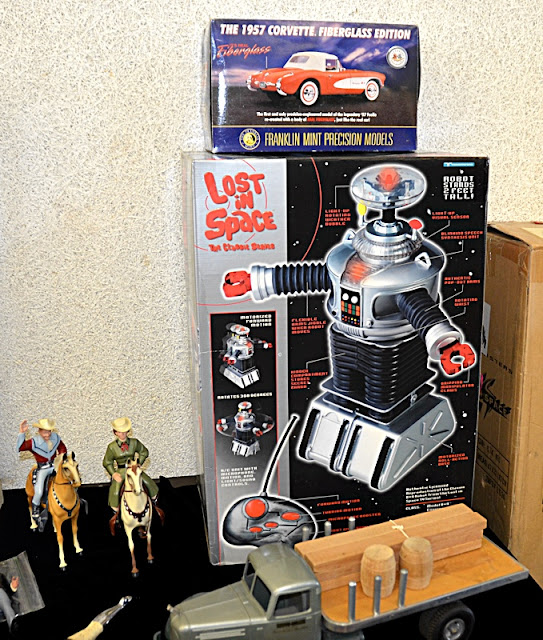 The intriguing educational model of a generic US convertible from Ideal (below) was titled a Crystal Starflite. 'At last - a real working car model' says the box, and indeed you can see the engine and other components inside. The transparent plastic has been yellowed by time, but there was still a $1000.00 price tag on it. 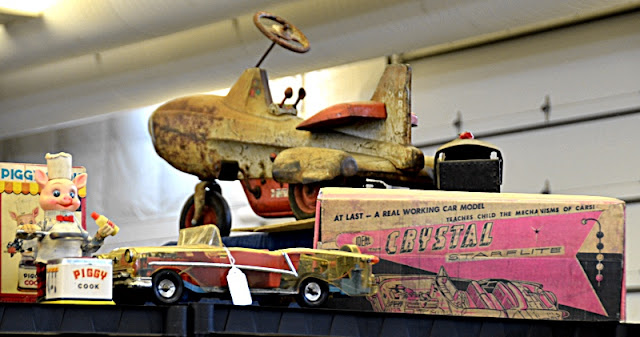 If you thought Renwal only made kits of 'Visible' figures, and military vehicles, then think again. In fact, also Renwal made lots toys, including (below) this Hook and Ladder piece of streamlined firefighting equipment. Play features included climbing firemen, and it had an asking price of $275.00

An original Aurora Batcycle (below) rubs shoulders with a toy Batmobile and figure of Honey West, the private eye star of a 1965-66 US TV series. 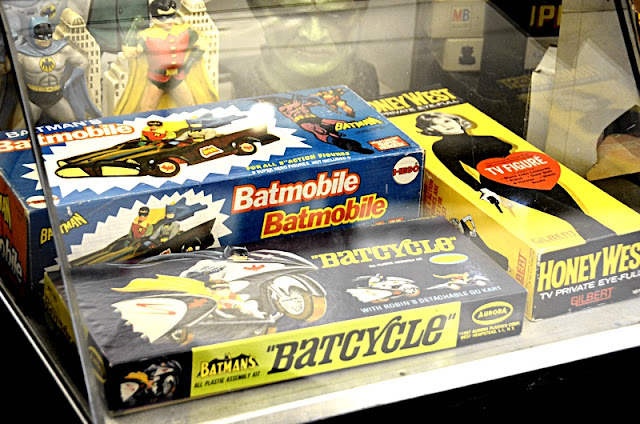