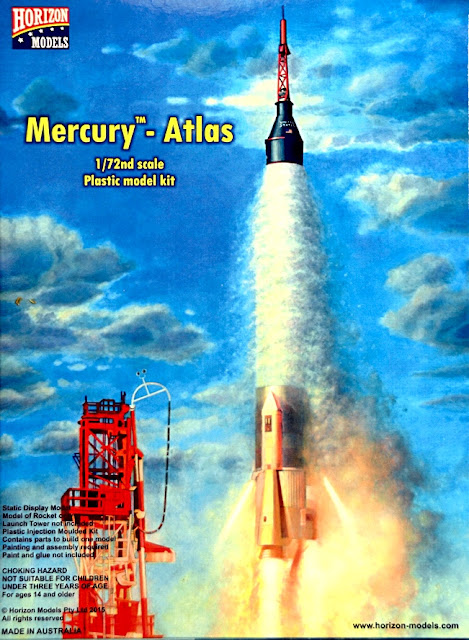 Mat Irvine: The kit features the Atlas launch vehicle and Mercury capsule, both used for the final four manned orbital Mercury flights, from John Glenn onwards, plus some test flights. The Mercury human spaceflight program ran from 1958-63. The kit is an exciting one, not least for it being released in standard model aircraft 1:72 scale.

The back of the box (below) shows three neatly painted versions of the Mercury-Atlas. 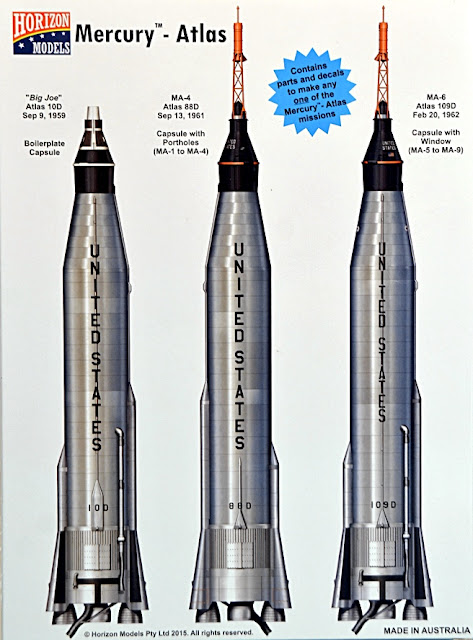 The kit includes the Mercury spacecraft that featured as the first Horizon release. However the bulk of the kit's contents are the components to assemble the Atlas rocket, a launcher that was modified from its original role as an ICBM (intercontinental ballistic missile).

Some components (below) are duplicated, as you get two identical runners. There are also some extra parts not used in the kit. Perhaps they are there for a future release. 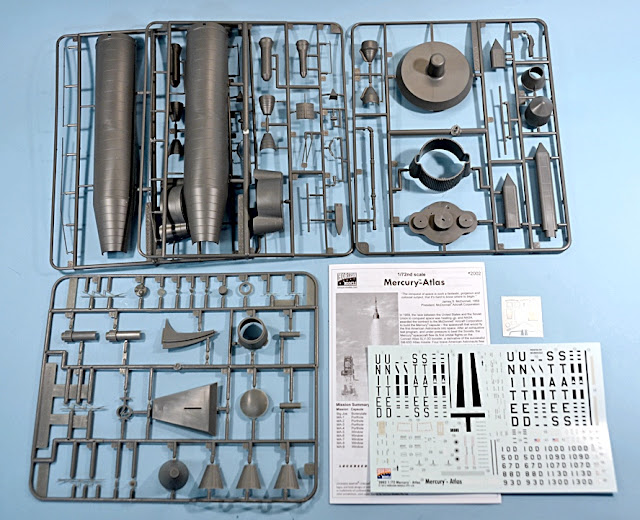 Assembly of the Horizon Mercury-Atlas kit is basically quite simple. There are two main airframe halves, with separate parts for the lower section, engines, and the adaptor that links the Mercury spacecraft to the Atlas launcher. As a side issue, there’s no really convenient term for the main body of a rocket. ‘Tank’, ‘hull’ and ‘fuselage’ have all been used, but none really work well. ‘Airframe’ has long been used for aircraft, and has now been generally extended to include rockets.

Part of the comprehensive instructions (below). These need reading carefully so you can decide exactly which version to build. 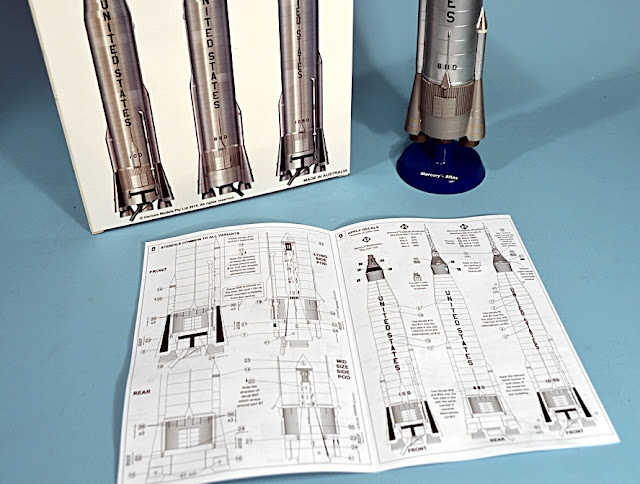 If the assembly is straightforward, the options are a little less so, as they cover all the Mercury-Atlas launches. You can build any version, manned or unmanned.

The two airframe halves (below) come from the same tool, so some holes have to be opened out in one half for details such as the LOx (liquid oxygen) tank pressurization pipes. The positions are detailed in the instructions. 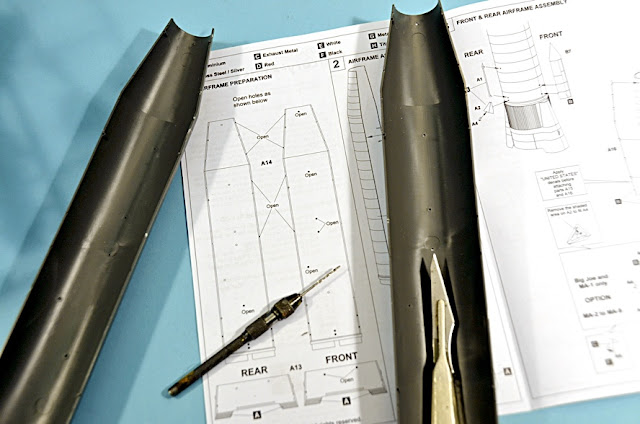 You could build a Mercury-Atlas that covers several launches, but each launch had a rocket with its own number. The decal sheet includes them all, so you will have to decide which launch you are going for.

The main sections of the Atlas (below, left to right) are the tubular airframe, intersection, and engine skirt. 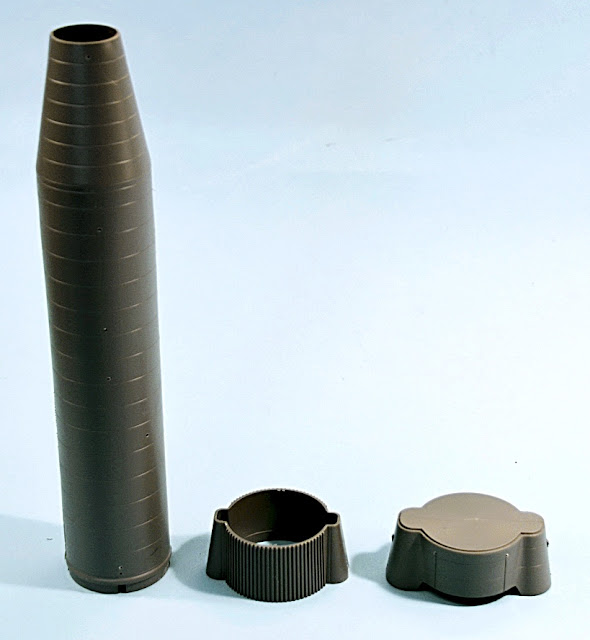 The same applies to the Mercury spacecraft, as each one varied in detail. In the end, I went for launcher MA-4, the last of the unmanned launches. For this, the main Atlas airframe uses a long equipment pod (as they all do) with a mid-size pod fitted opposite. There is also a short pod, appropriate for earlier versions. The UNITED STATES for this is supplied in large lettering size. Manned flights used smaller lettering.

LOx piping along the front of the Atlas (below). 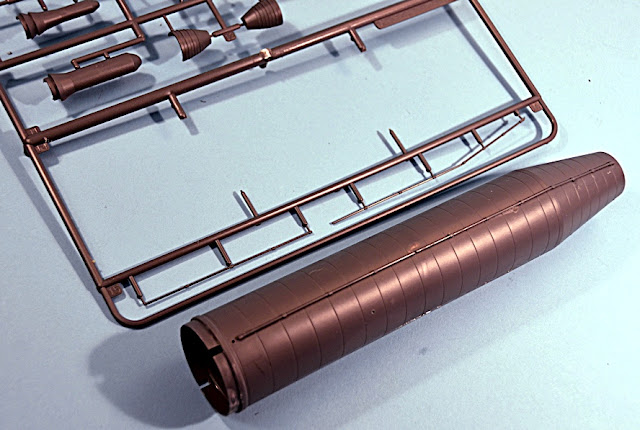 Test-fitting the LOx pressurization pipes (below) including the small joining component. 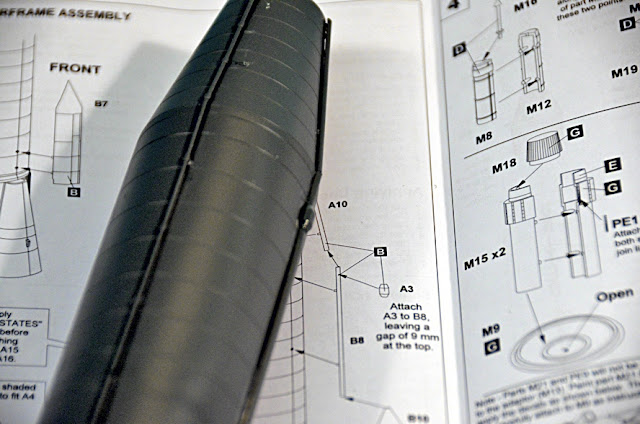 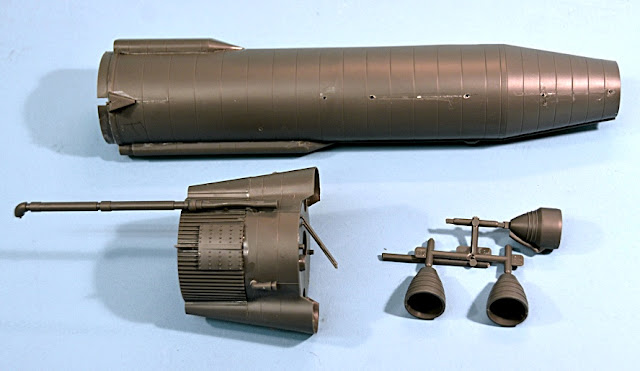 I sprayed the main airframe (below) with Humbrol Chrome Silver (191) to reproduce the highly reflective finish of the real rocket. 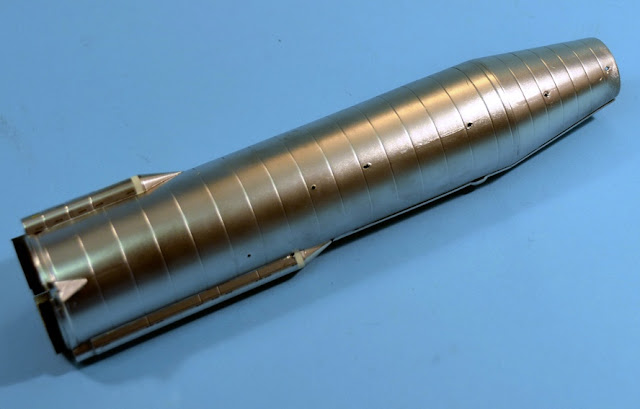 The comprehensive decal sheet (below) includes all necessary markings. 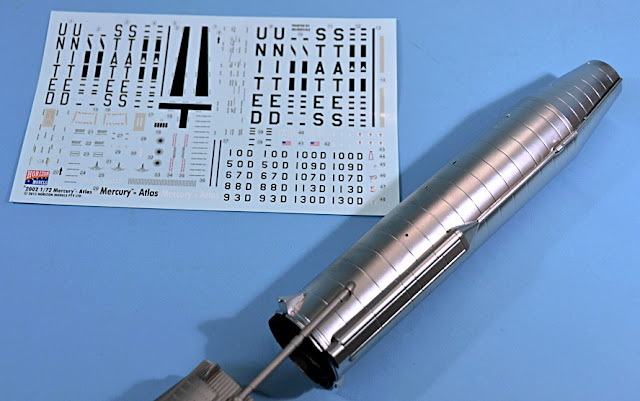 It is important to apply the main lettering (decal below) before attaching the LOx pressure pipes to the airframe. 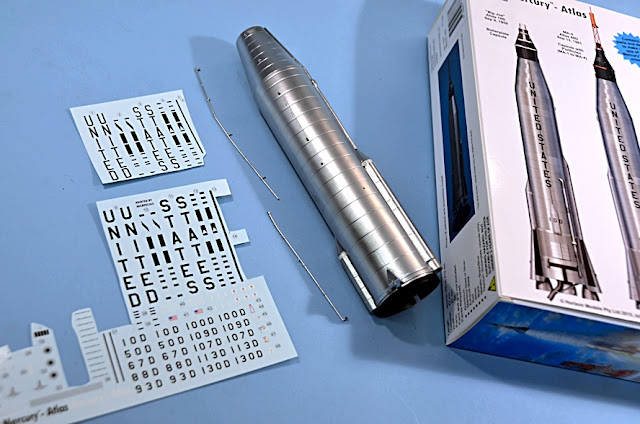 The lettering is interesting, as on one side (deemed the ‘front’, so you can distinguish which side is which, on a tubular airframe) where the LOx lines pass over the outside of the airframe. The UNITED STATES was painted over these pipes, so the decal sheet supplies not only the words themselves, but the centre section of the lettering ‘stretched’ as it would be in passing over these pipes. The is first time I can recall this subtle extra being supplied in a rocket kit.

With the main lettering applied and dry, the slender LOx pressurization pipes can be fitted (below). The supplied stretched letters can now be applied over the pipes. 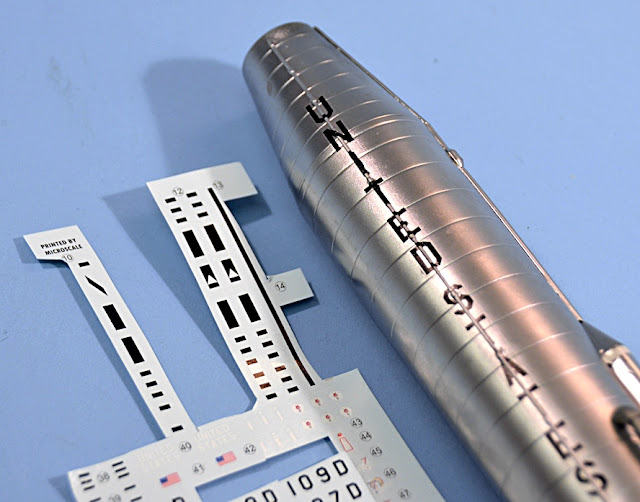 Half of the stretched lettering laid in place (below). For a successful application, is important to use a decal softener, which will allow the material to bend around the tight radius of the pipe. 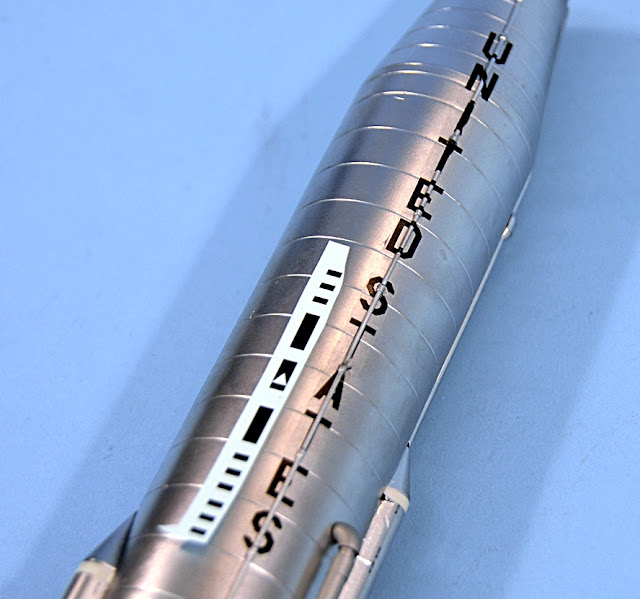 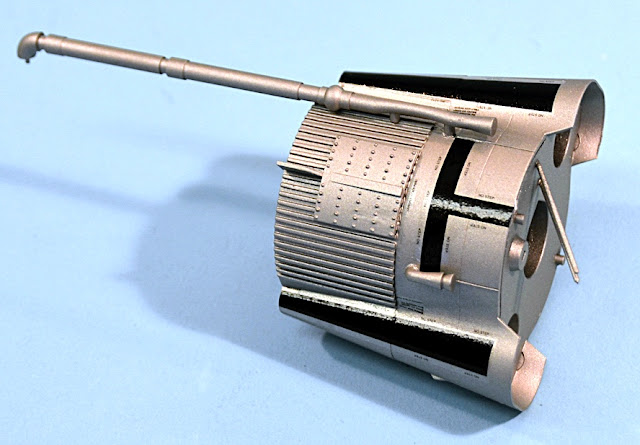 We are looking forward to more 1:72 scale spacecraft from Horizon Models. The Mercury-Atlas (below) was a pleasure to build, and neatly fills what was a yawning gap in the range of early spacecraft kits.

Two 1:72 spacecraft from Horizon show the original Mercury capsule (below left) with the new same-scale Mercury-Atlas. The stands are included. 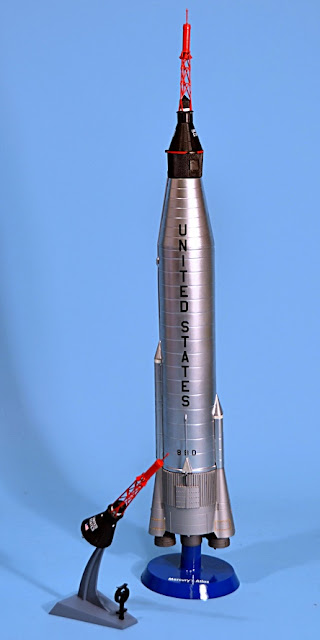 Excellent reference (below) comes in the book Mercury A Guide for Scale Model Builders from Mike Mackowski’s Space in Miniature series. 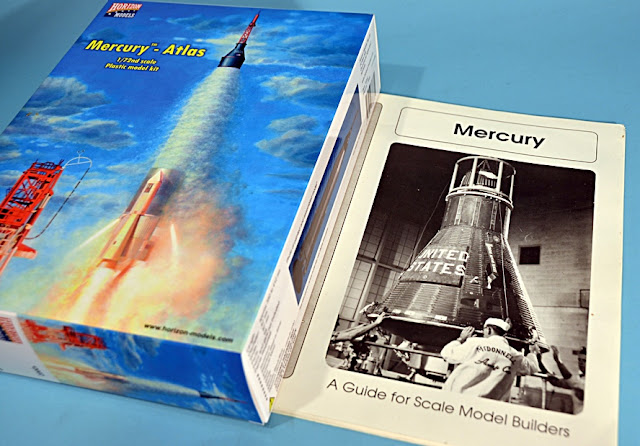 Summation
The Horizon Models Mercury-Atlas is a nice kit that is unique in two ways. It is the first conventional injected-styrene Mercury-Atlas to 1:72 scale, and the Atlas is reckoned to be the first all-Australian injection-moulded scale model kit.

SMN note: We like Horizon’s enthusiasm for this kit. In the company’s words, “…Relive the Dawn of the Space Race with our exciting new 1/72 scale Mercury™-Atlas model kit... Begin your journey today!” Plus, if you need further temptation, Horizon lists these goodies:

However, we have not seen the Mercury spacecraft name before, with a trademark logo next it. Google search drew a blank on the question of ownership, so does anyone know the answer?

Thanks to Horizon Models for the review kit.