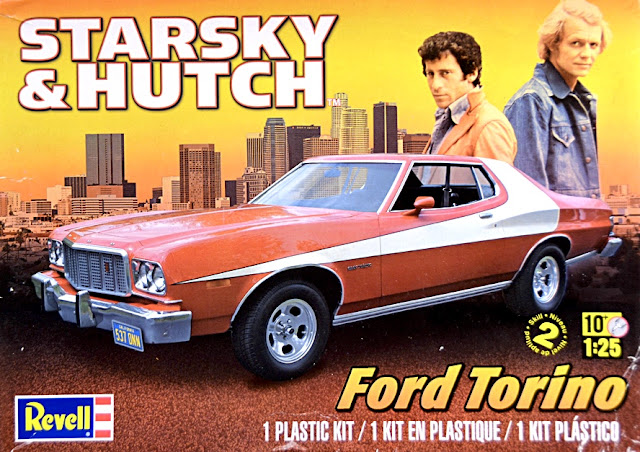 THE FAMED RED-AND-WHITE FORD TORINO from the 1970s cop-thriller TV series, Starsky and Hutch, is one car you would have thought would have been made as a kit years ago. There have been diecast and slot car versions, but it’s taken 40-odd years for a 1:25 scale kit to be released - and here it is.


Mat Irvine: This new Revell kit features the 1975 Ford Torino, as driven in the series by David Starsky, played by Paul Michael Glaser. The gaudy colour scheme earned this particular Torino a nickname, the ‘Striped Tomato.’

The box (below) features the human stars of the TV series, Starsky is the dark-haired one. Box sides feature useful detail shots. 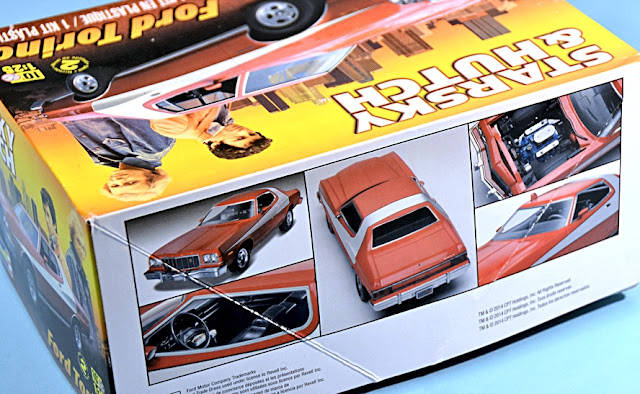 The 1:25 scale Revell Ford Torino kit is straightforward to assemble. The body and interior are moulded in red, the rest in black. The kit is midway between the old-style ‘unassembled promo’ (solid chassis, fixed hood, no separate engine) and a modern kit with detailed suspension, axles, and engine. This Revell kit has a separate exhaust system, dampers and prop shaft, but the axles are simplified into one or two parts, so the whole assembly is reasonably solid, which is no bad thing.

What you get in the box (below). Note that the Torino's interior is moulded in red, although it will end up in black. 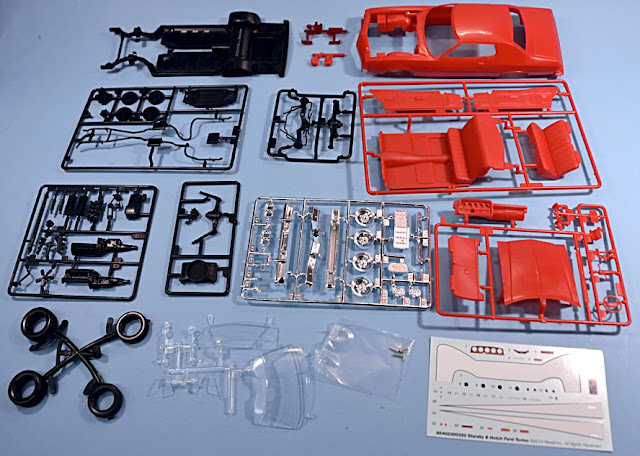 The interior is basically stock, the only concessions to its undercover work being a police radio and the obligatory red beacon for the roof. Add to these a decal sheet which features the white stripe, supplied in three parts. I had a slight worry, given that the bodywork is bright red, that the white decals would not be opaque enough, but there is no ‘pinkness’ after application.

An odd feature of the bodywork (below) is that the front bumper’s outer edges are separate parts, and have to be cemented into place. 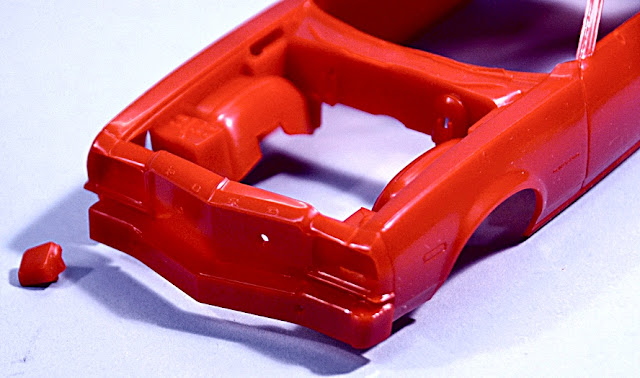 There are also decals for the instrument dials and correct license plates for Starsky’s car. There’s no physical plate holder for the front, which fits on the offside of the front bumper. This is slightly unconventional for a standard US sedan, as plates are usually dead-centre. You can either cut the plate from the decal sheet and glue it in place, or make up a plate-holder from spare plastic sheet.

The parts that were intended to be gloss red were undercoated in Humbrol matt Desert Tan (237) (below) as a matt red is not manufactured in the acrylic spray range. Humbrol gloss Bright Red (19) was used as the top coat. 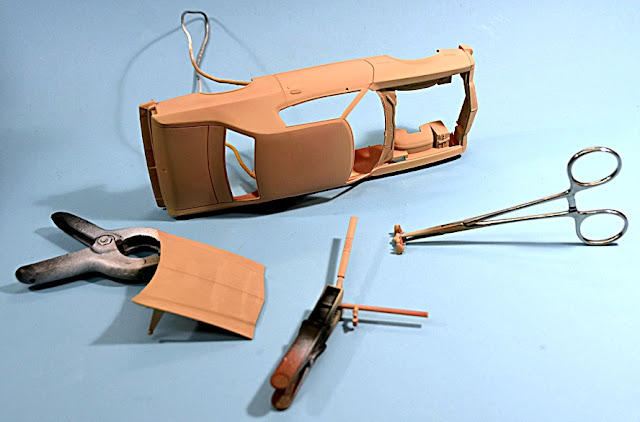 Fitting the radio in place (below) under the dashboard. 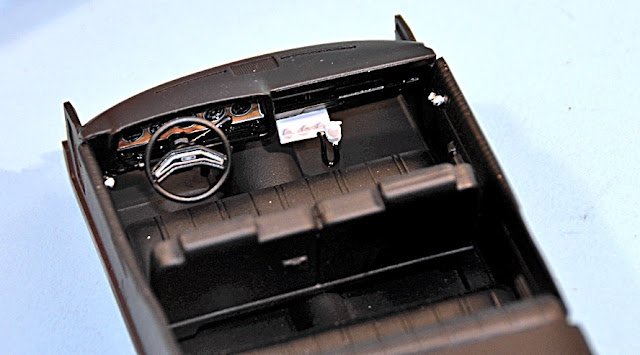 The Torino's three sub-assemblies (below) after completion - body, interior and chassis. 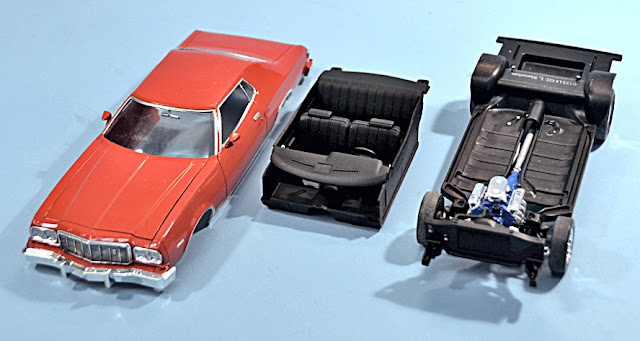 I displayed the completed Revell Striped Tomato Torino on a section of Italeri highway (below) as reviewed in Scale Model News. I finished the highway off with centre markings in yellow. 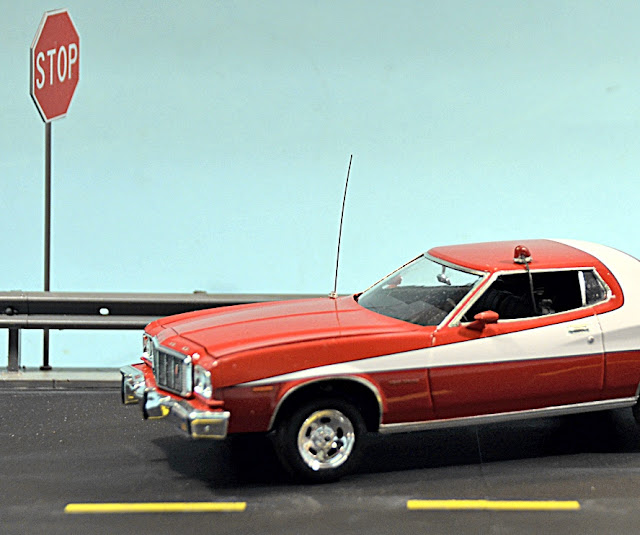 Kit history
The kit has been rumoured for several years, and it took that long to get the tooling correct. In particular, there seems to have been trouble making the rear quarter-light accurate. Eventually, a real car was scanned to get it correct, which has not stopped some continuing to maintain that the kit is wrong. But that means the 1:1 scale original was inaccurate… 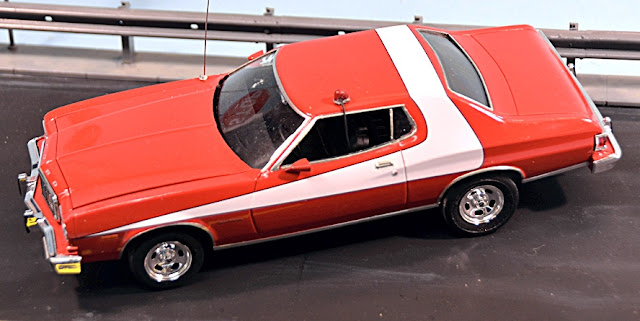 If Annuals (or Yearly) cars series were still going from the likes of AMT in the mid-1970s, it is a given that this car would have been made, but AMT stopped doing its Annual series (apart from Corvettes and pick-ups) around 1970. Jo-Han almost got there with its 1973 Torino, but the body style changed quite a lot the following year. The car used in the initial TV episodes was a 1974 model. This was later changed to a 1975, though the only real difference between them is that the 1974 had chromed side mirrors, those of the replacement car were body-coloured. 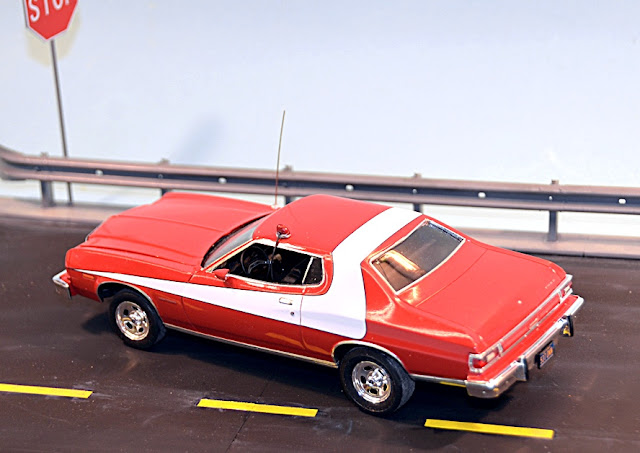 Another reason for delay could be that these days kit companies try to get maximum use from a new release. This is a sensible move as tooling is not cheap, and if you can spread the cost across several version, you obviously lower the price for each. But this Torino body style was unique for 1974-75, and there was no race car that could be made from it. So the only options for this kit were a completely stock car, or this Starsky and Hutch version.

Summation
A nice kit that that’s certainly been worth the wait. My only complaint is - where are the figures of Starsky and Hutch?!

And for those who missed the original series, here's the short trailer, complete with the Striped Tomato.


Thanks to Revell-Monogram for the review kit.
Email ThisBlogThis!Share to TwitterShare to FacebookShare to Pinterest
Labels: Ford Torino, Starsky and Hutch
Newer Post Older Post Home