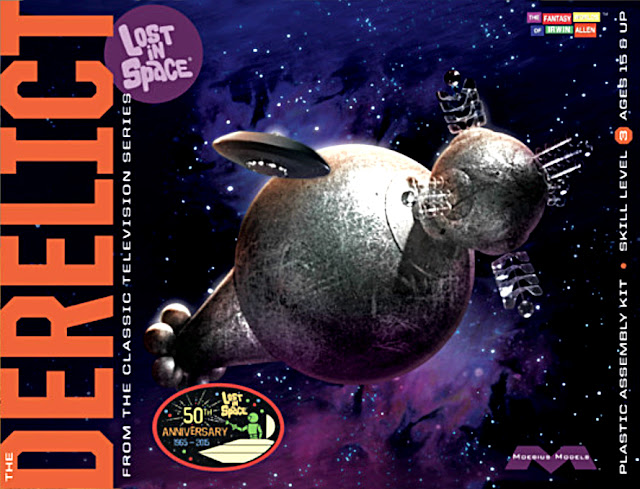 Mat Irvine: The Moebius kit is a large one that usefully depicts the alien Derelict’s much greater size, compared to the Jupiter 2. When assembled, the model Derelict’s main sphere measures 160 mm (6.25 in) across, and with the rear door sections closed, it extends some 430 mm (17 in) in length.

The box base (below) includes useful details of the kit, and others in the Lost in Space range. 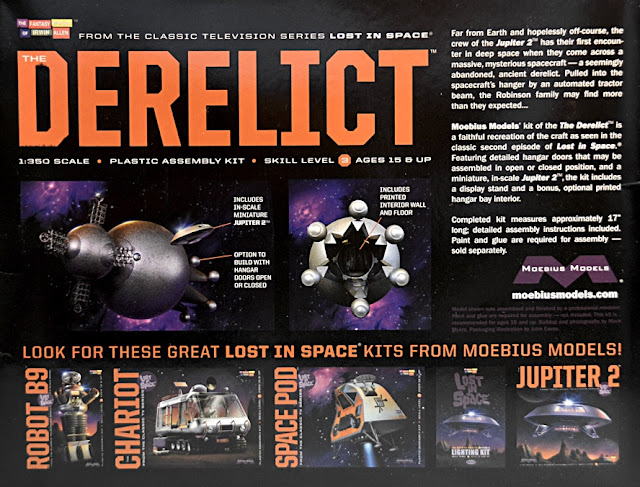 Moebius includes a Jupiter 2 to the same 1:350 scale. In fact, you get a trio of them, as the way the parts are moulded, three clear runners each have Jupiter 2 top and bottom halves. This also means that you can build the Jupiter 2 with landing legs either retracted or extended.

Some component runners (below) are duplicated, such as six for the hangar door assemblies, and multiples for the clear Jupiter 2 and various propulsion field emitters. 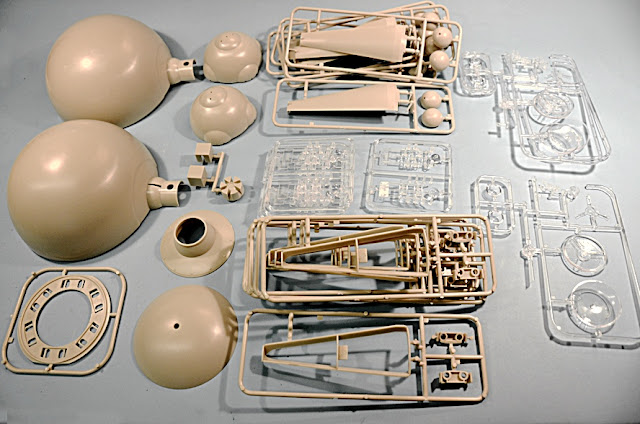 Moebius has provided the Derelict’s interior with a landing hangar, complete with strange-looking alien 'neutron strands.' These are depicted in the kit as pre-coloured card press-outs, though I suspect it won't be long before we see aftermarket companies supplying these as electrical circuits. 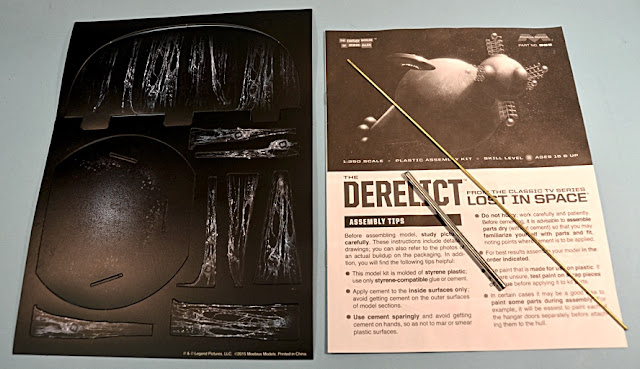 You can build the kit with the six hangar doors (or fingers, as Moebius states on its website) open or closed, but you have to decide which, as different hinges are employed. 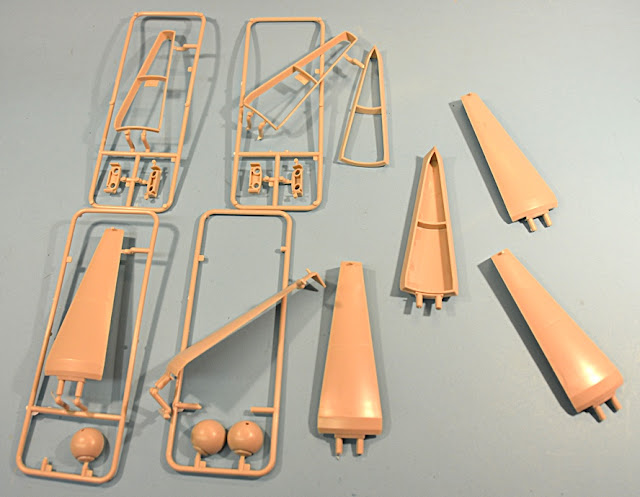 The first Lost in Space season was shot in black and white, and no colour photos of the original FX miniature can be located, making ascertaining precise detail difficult, and confirmation of exact colours impossible. However, the Derelict is likely to have been a shade of silver-metallic, with a textured surface, though as none of this really shows up in detail on screen, you are free to finish it how you wish.

Adding the spherical 'sensor-deflector' units (below) to the hangar-door ends. 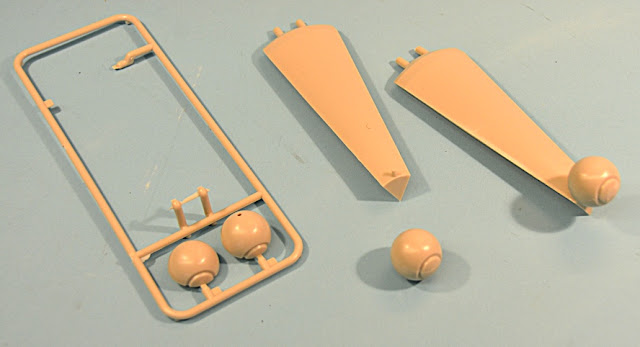 Building up the hangar floor and neutron strands (below) from the supplied card. Here I am test-fitting these items into the main Derelict hull body. 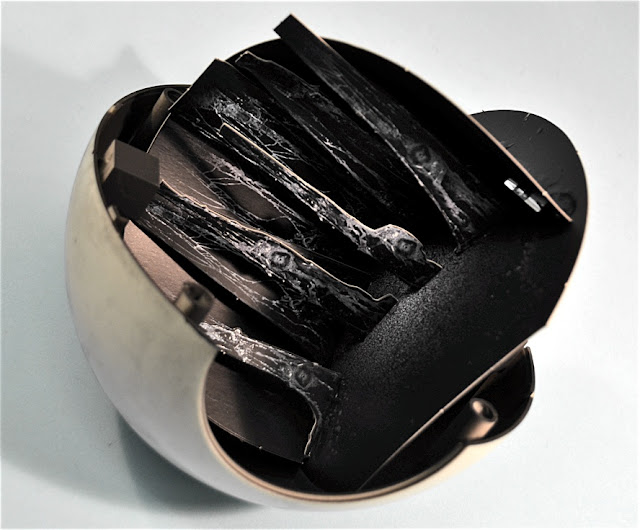 The hinge ring of the hangar doors (below) fitted in place. 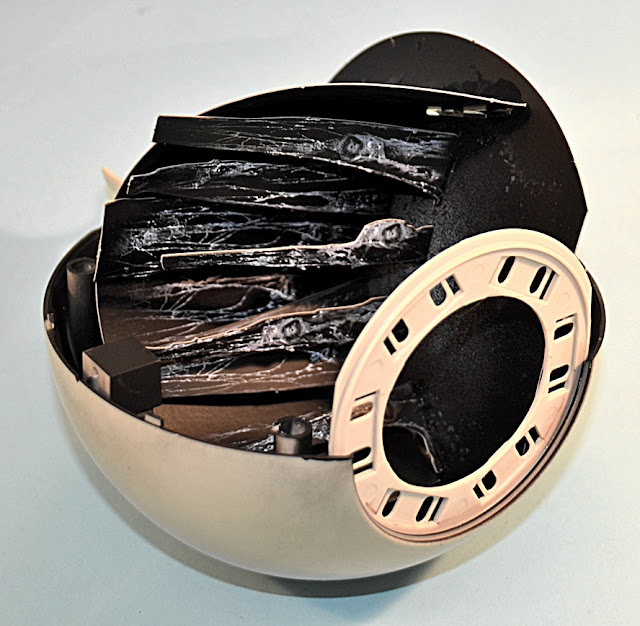 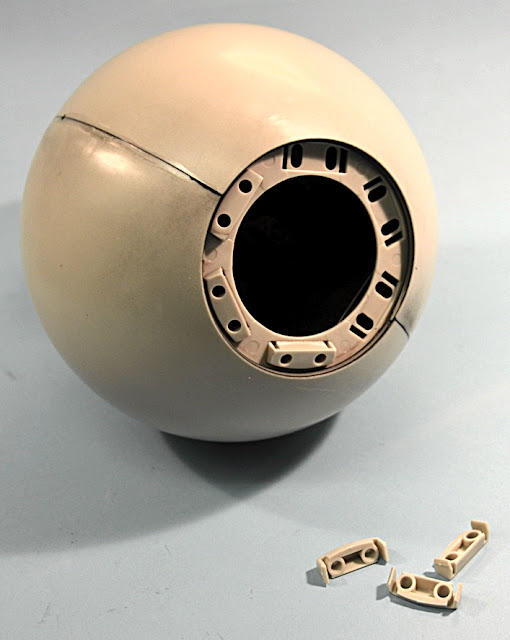 Dirtying down the transparent emitter components (below) with mist sprays of transparent smoke and metallic bronze. 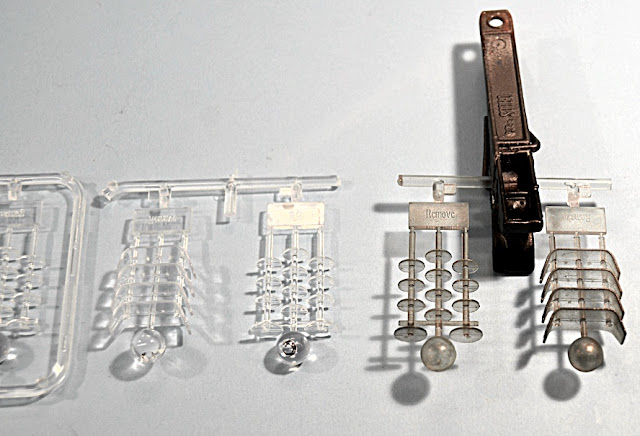 Fitting the Derelict hangar doors (below) in place. 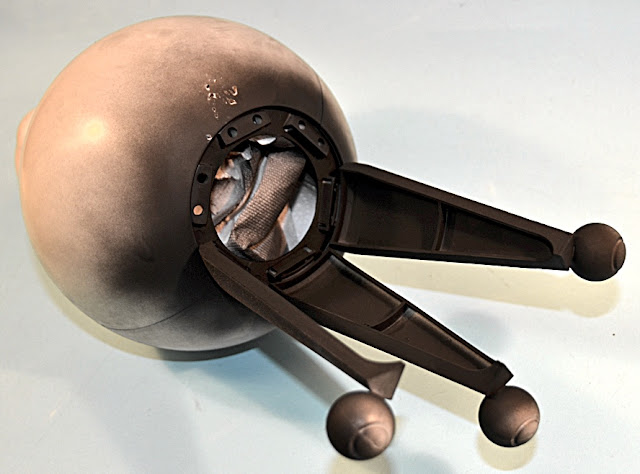 Sorting out components for the Jupiter 2 (below) which can be built with landing legs folded or extended. There are enough parts to build both versions. 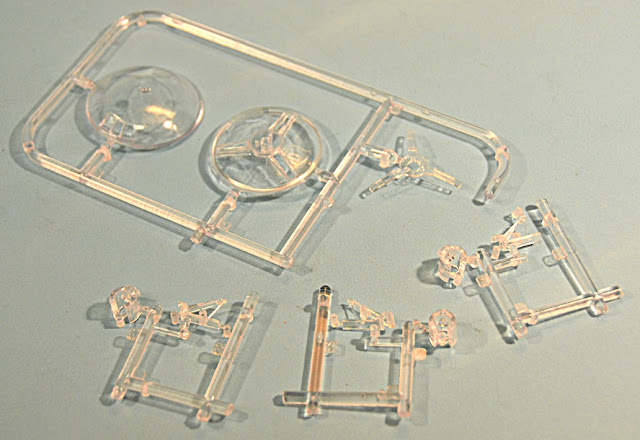 The windows and fusion core dome of the Jupiter 2 (below) are still masked, as they will remain transparent. 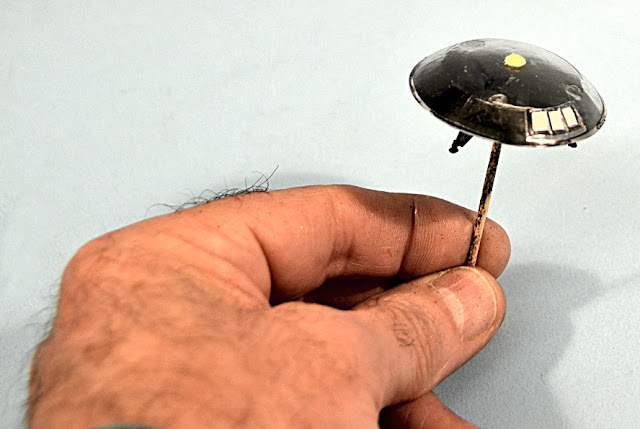 Priming the main bulk of the Derelict (below) with Humbrol matt black. 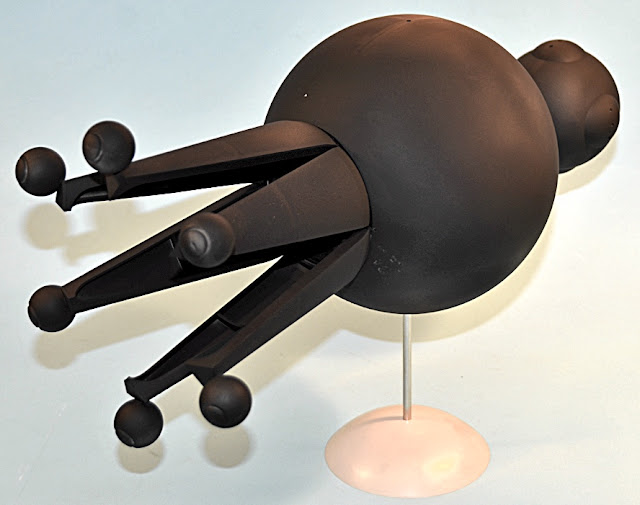 Moebius instructions suggest using textured paints to provide an appropriate appearance. For this model, I used Testors vinyl roof spray for the slightly rippled finish it gives. Then I had fun with a variety of silver and metallic shades over that, after which, I finished off by dry-brushing for the final effect. 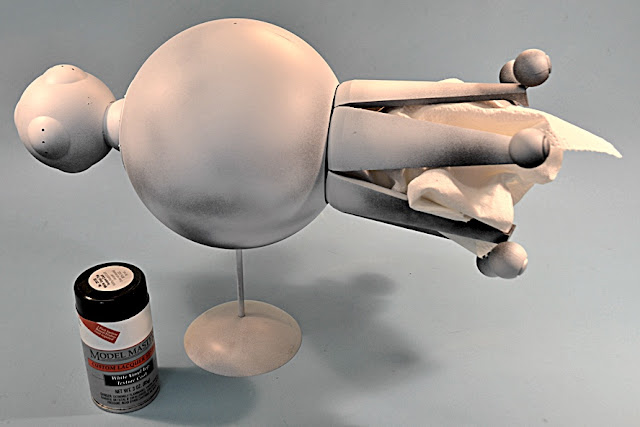 Finishing off (below) with various metallic sprays, and some dry-brushing.

Closeup of alien components known as emitters (below) fixed in place. 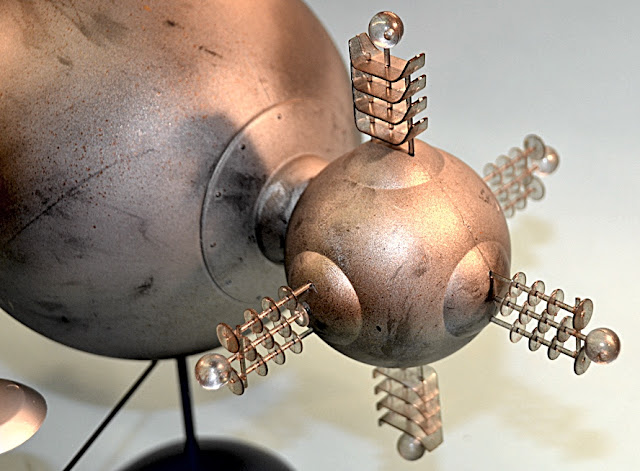 View through the hangar doors (below) with a Jupiter 2 at right. 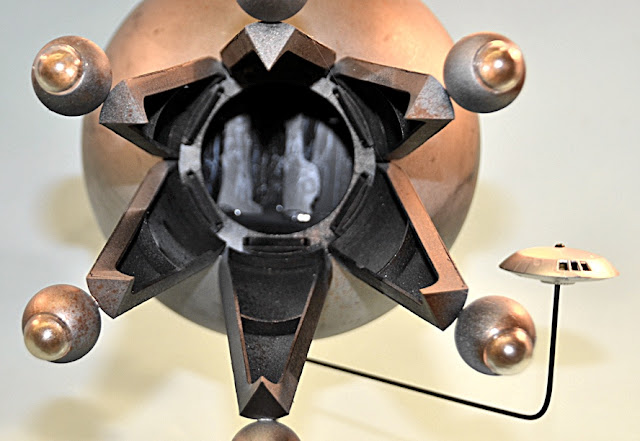 Moebius supplies a small but sturdy base, complete with a short length of thick rod. This supports the finished Derelict, while the Jupiter 2 can be positioned next to it. A length of slim brass rod is provided for this purpose, though you could replace it with something even thinner. You can fix the rod in the hole at the top of the sphere, or use a clear adapter to attach the Jupiter 2 to the main stand.

The finished model (below) with both versions of the Jupiter 2 in position, using the supplied brass rod. 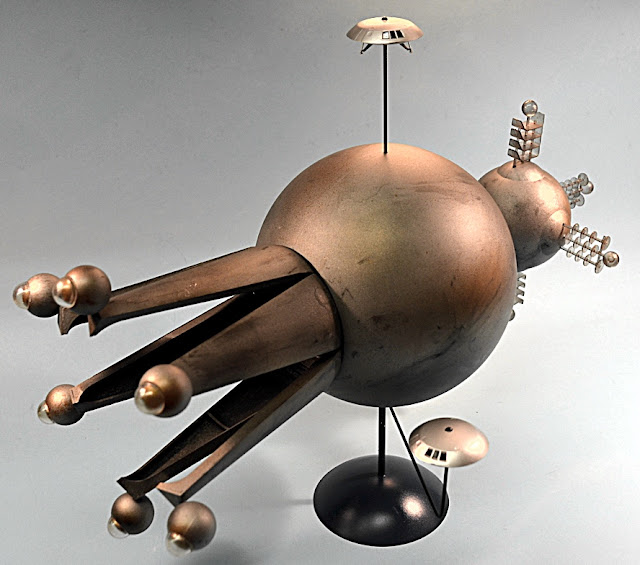