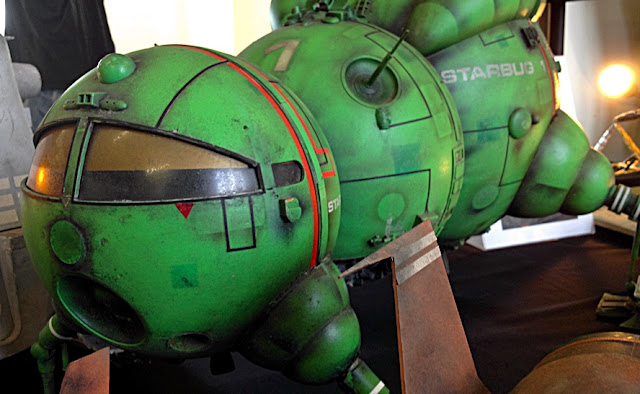 SMN report: Smallspace 5 is coming on Sunday, July 3, 2016, and promises to be even more action-packed than last year’s absolute blast. In 2015, the rediscovered Whomobile from Doctor Who certainly put smallspace 4 on the newsmap, when the story splashed in the prestigious London Times newspaper (below). 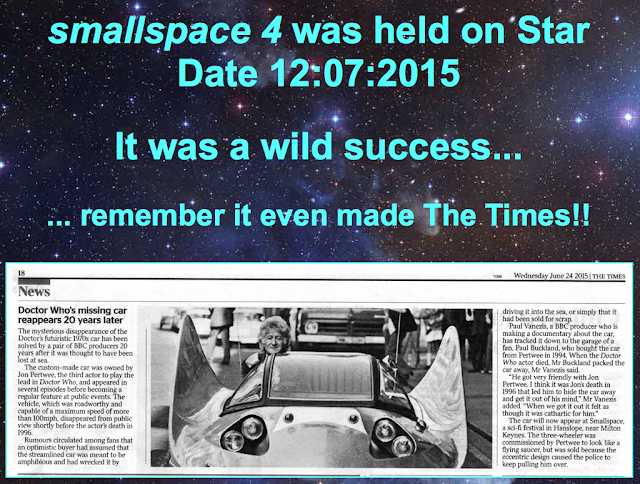 YouTube movies (above, below) give you a feel for the many small wonders appearing at the annual smallspace show.

The bottle-green Starbug (below) featured in the much loved sci-fi comedy series, Red Dwarf.

Thunderbirds is the seminal Gerry Anderson TV series. The yellow Thunderbird 4 (below left) and pink Rolls-Royce featured in many episodes. 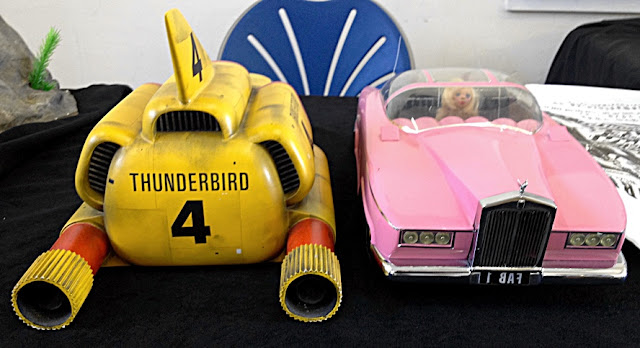 More Gerry Anderson-inspired models (below). They are made with great care and attention to detail, work that’s reflected in the realism of the finished models. 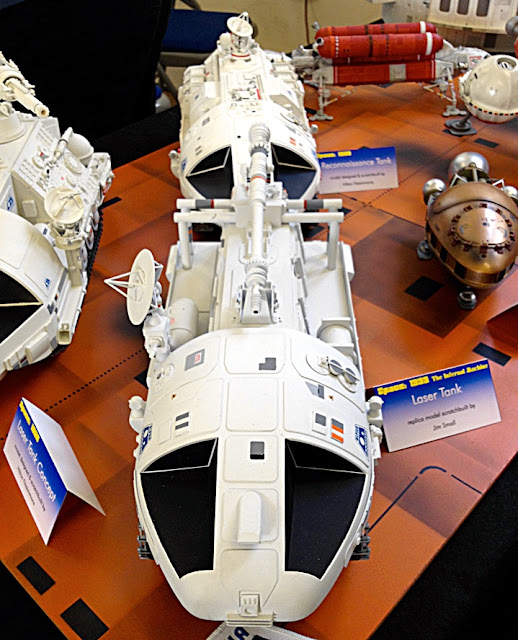 The Hawk spacecraft (below) features a transparent nose section, a somewhat scary place to sit if I was in command! The weathering is nicely done, and the metallic blue finish makes an interesting change from plain white or silver. 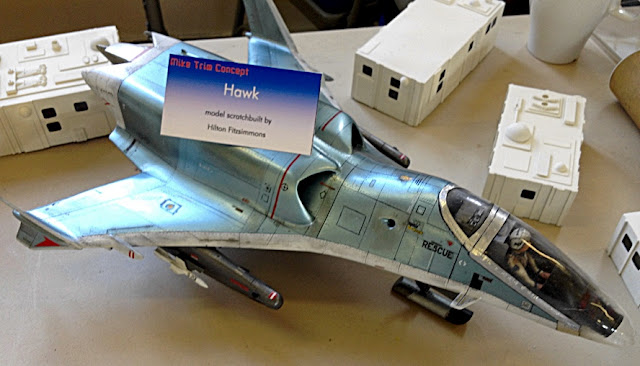 The sun shines on this earlier smallspace show, where a Star Wars trooper (below left) is surveyed by a life-size Dalek. Co-organizer Mat Irvine (in red) demonstrated his radio-control K-9, the robo-dog that featured in the BBC Doctor Who series. 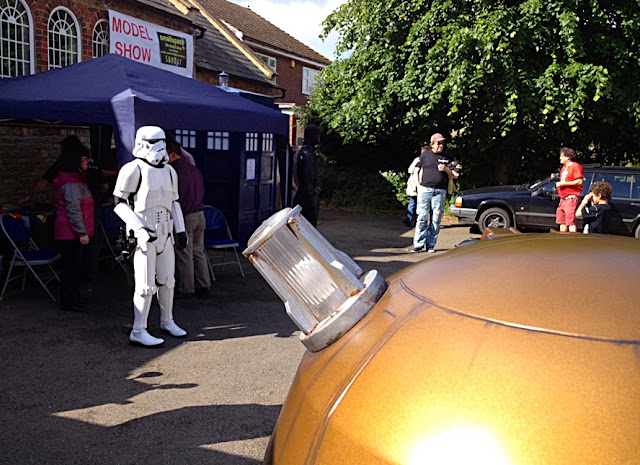 Sleek rocket (below) envisages where the original US Moon program could have led. Today we have Elon Musk’s SpaceX hard at work, so the future is looking bright again. 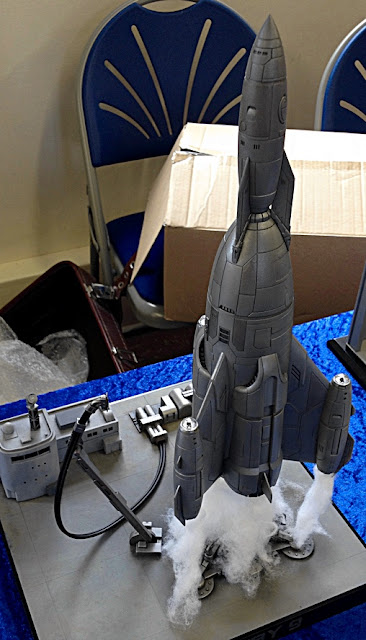 Starfury space fighter (below) from the Babylon 5 TV series, tagline “It was the dawn of the third age of mankind, ten years after the Earth-Minbari war…” Babylon 5 ran for 110 episodes, from January 1994 and the 1:72 scale kit released by Revell kit assembled to make a pretty good miniature. The weathered and dirtied model here is set off by the excellent air force-style brightly coloured decals.

Note to Revell: Let’s have an updated version soon, please. 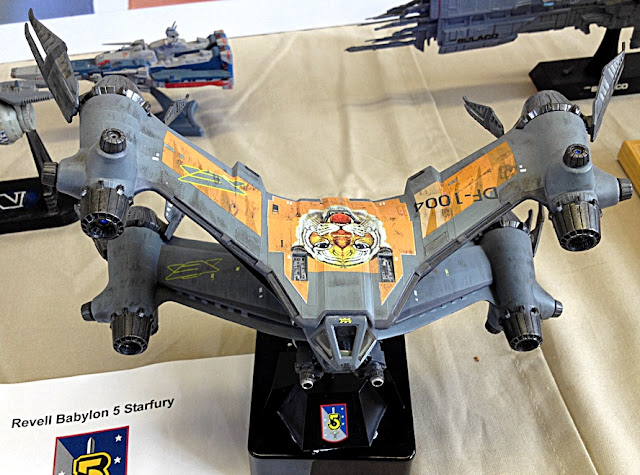 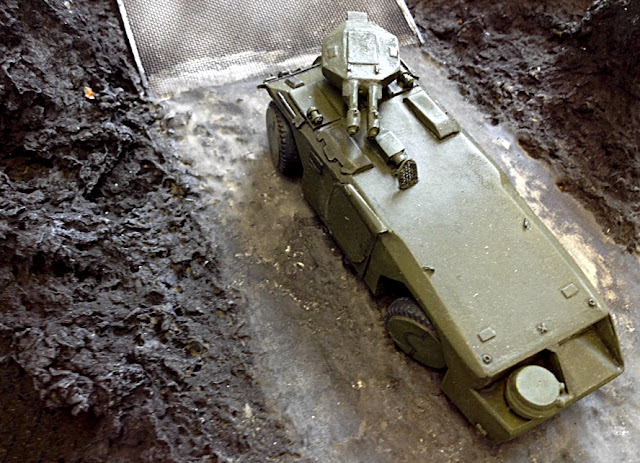 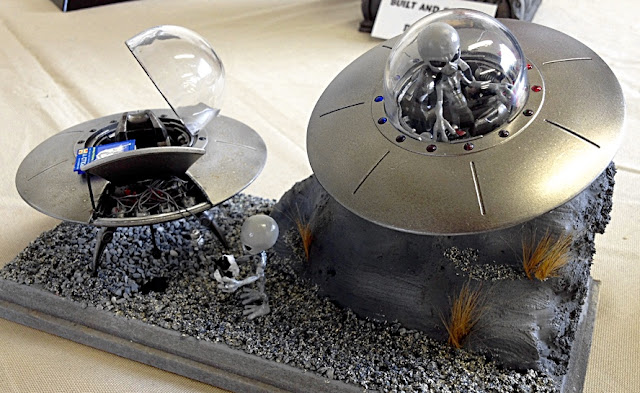