JULY 20 AND 21: CELEBRATING THE LUNAR LANDING OF APOLLO 11 AND VIKING TOUCHDOWN ON MARS 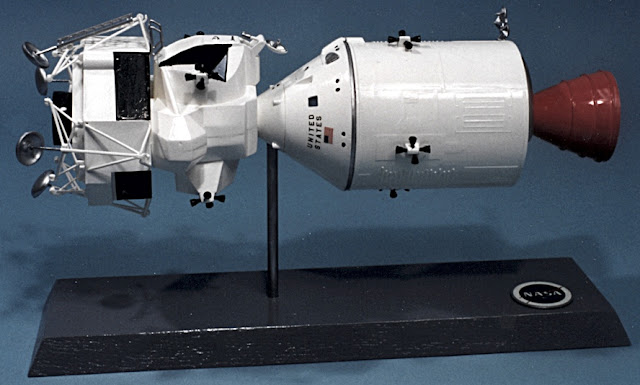 THERE ARE PLENTY OF APOLLO KITS out there, not so many models of the Viking that landed on Mars, seven years after the first Apollo landing.


Mat Irvine: Monogram, Airfix and AMT all issued Saturn V rockets to celebrate Project Apollo, with an appropriately scaled Lunar Module (LM) on board. Airfix made the first separate kit of the Lunar Module, to 1:72 scale, and it is still a very good representation. Monogram produced a larger 1:48 scale LM, with all the paraphernalia carried by the Apollo 11 Mission, to be laid out on a textured base.

The Revell 1:48 scale Apollo craft (below from left: LM, CM and SM). I built the trio as a retro-style display model as you might have seen on the desk of a NASA executive.

Airfix 1:72 scale LM (below) with the astronauts and equipment supplied with the kit. The only item not relevant to Apollo 11 is the high-gain dish antenna, which wasn’t carried until Apollo 12.

Apollo has also been a favourite with so-called ‘garage’ companies. Vista Replicas made the largest multi-material LM for many years at 1:32 scale, to match the 1:32 scale Apollo CSM made by Monogram. RealSpace Models has made a variety of upgrade kits for Apollo, and it is RealSpace that brings us to Viking.

Airfix LM in a lunar diorama (below). I laid this out to represent the Tranquillity Base. Note the low lighting. NASA chose the data and time to give maximum surface shadows, making it easier for Neil Armstrong and Buzz Aldrin to distinguish surface features and make a safe landing. 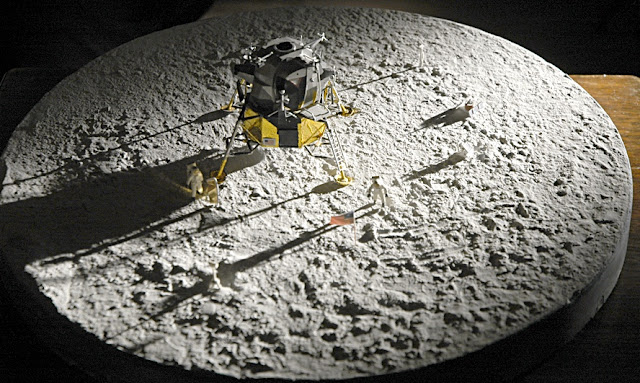 Apollo has been well represented in the model market, ever since the project was announced in the 1960s. Old kits are constantly being reissued and there are even brand new kits from Dragon. The earliest kits from Revell came before the real spacecraft were finalised, so are referred to as boilerplate versions.

Click here for an explanation of the term boilerplate. 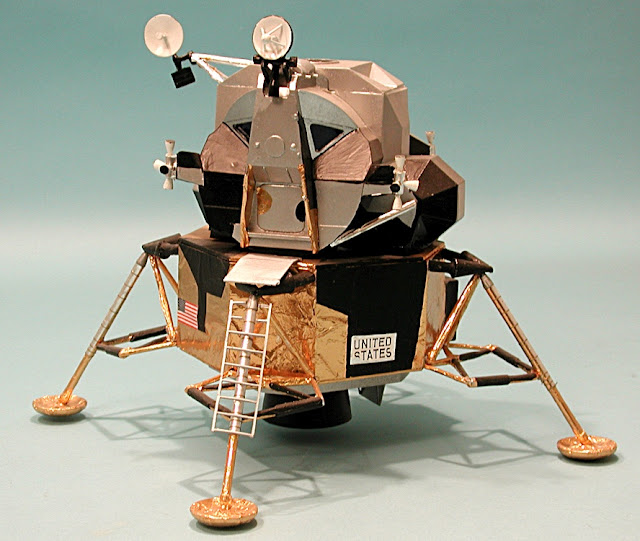 Vista Replicas LM (below) in a lunar setting, with astronaut figures. I set this up for my 'One Small Step' exhibition, to show the desolation of the moonscape. 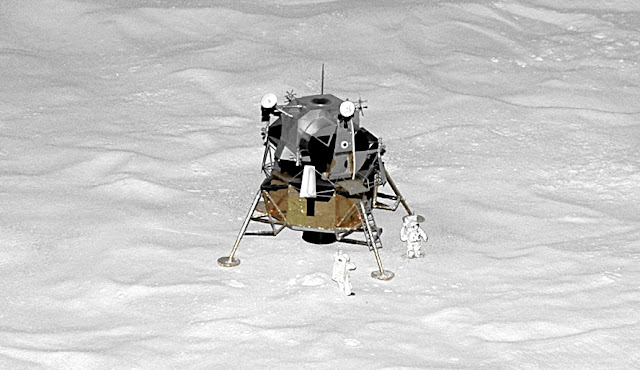 The Vista Replicas LM again (below) on a smaller base, during filming for a BBC 'The Sky at Night' Apollo special. Mat is seen (left) with the late Sir Patrick Moore. 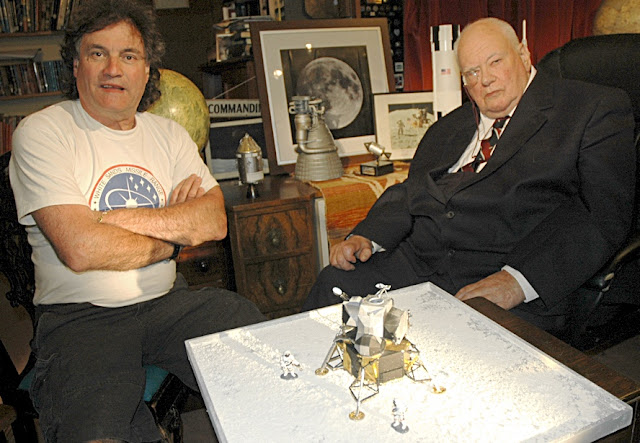 Uncrewed spacecraft have never quite had the appeal of those with humans on board, but RealSpace has made a number of kits, including highly-detailed 1:25 scale models of the Viking Orbiter and Lander.

RealSpace Models 1:25 scale Viking lander (below) on a Martian base, as featured in Mat’s Scale Spacecraft Modelling book. 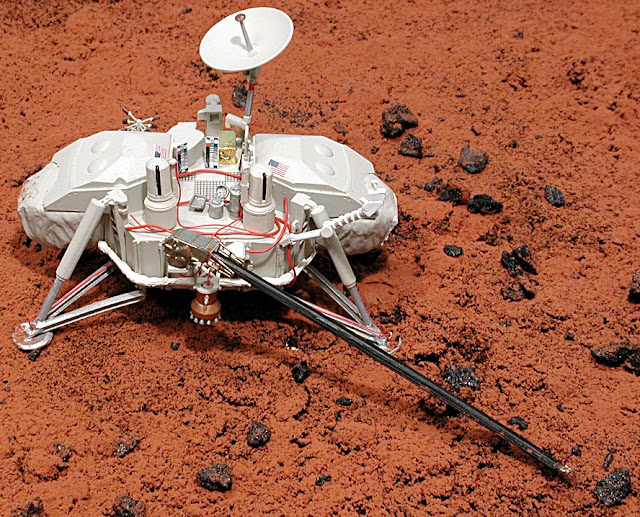 1:8 scale Viking lander, as built by Mat for various TV shows, including The Sky at Night, shown in 1976. 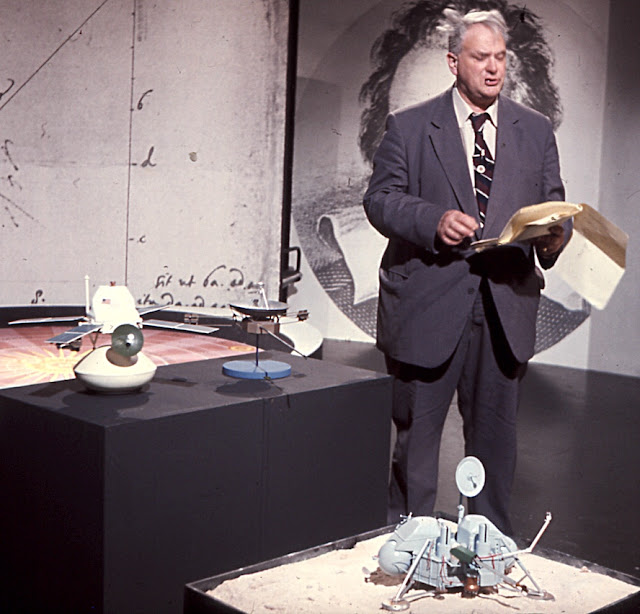 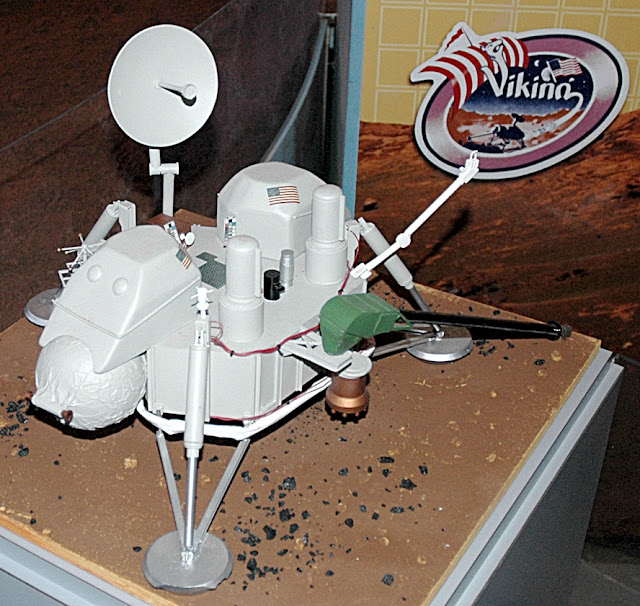 1:1 scale Sojourner Mars Rover (below right). The same model was used for the later 'One Small Step' exhibition. 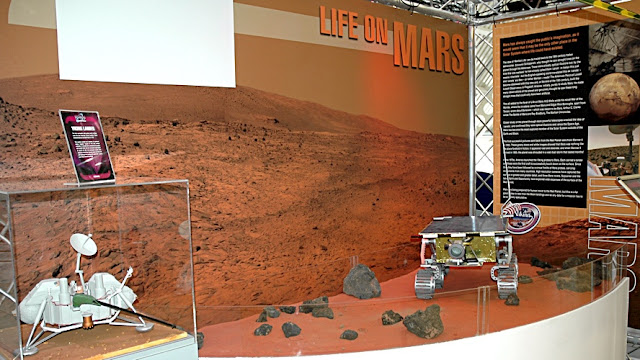 What’s the time?
When did humans first land on the Moon? It’s one of those questions you might get on a quiz night, but as posed here, the query is really too vague, and needs to be more precisely worded.

In fact, a correct answer brings its own problems, ones primarily to do with how we measure dates and times around the world. So the right answer comes down to knowing about time zones and GMT (Greenwich Mean Time), also known as UTC (Coordinated Universal Time).

The Apollo 11 LM touched down on the Moon at 20:18 hrs UTC on July 20, 1969. But NASA Mission Control measured the time from its location, at Houston, Texas. Houston is on Central Standard Time, six hours behind UTC, making Houston time 14:18 CST. Even so, the LM landed on 20 July, whichever time zone was used.

More confusing was when Neil Armstrong took his first step on the Moon. Mission Control timed this as 20:56 CST, July 20. But it was also 02:56 UTC on the following day, July 21. With qualifications, arguably both dates are correct!

The landing of Viking 1 on Mars is easier to deal with. The Lander separated from the Viking Orbiter at 08:51 UTC on July 20, 1976, with touchdown at 11:53 UTC the same day. Viking Mission Control was with JPL (Jet Propulsion Laboratory) in California, running eight hours behind UTC. So the landing was definitely on July 20, even if to a watching Martian, local time on the red planet would have been 16:13 hrs.