THE PREHISTORIC FLINTSTONES FLINTMOBILE TO 1:25 SCALE 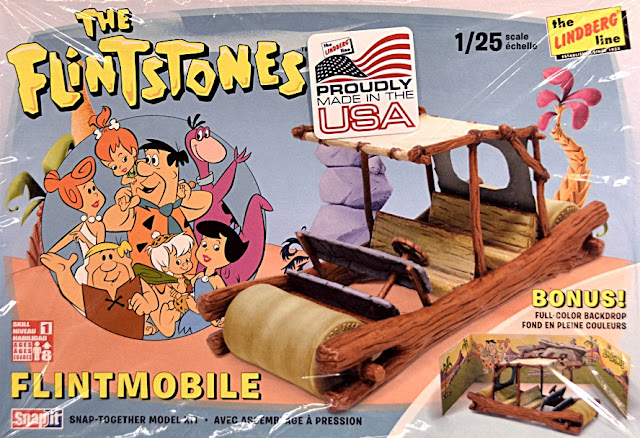 FANS OF THE CLASSIC FLINTSTONES CARTOON series can now enjoy this latest kit release from the Lindberg line.


Mat Irvine: This is a reissue of one of the very few ‘star cars’ issued by Lindberg. It’s a simple kit, with the components presented in ‘Snap it’ snap-together format. Of course, a drop of cement is always advantageous, to make sure those parts really hold together tightly.

As is customary now, the box base (below) and side list additional details. This Flintmobile represents the live-action 1990s movie version, though the figures shown on the box are from the 1960s cartoon TV series. 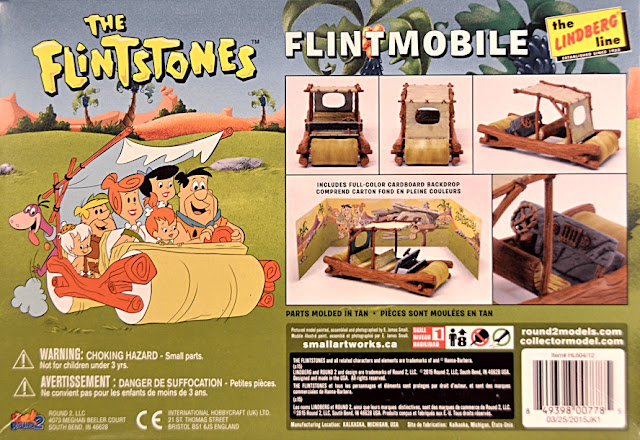 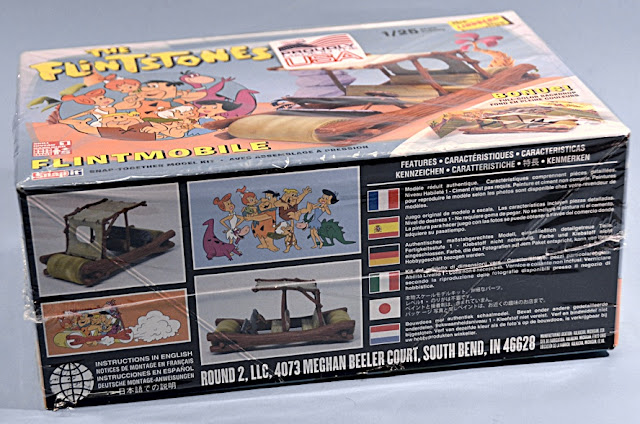 The Flintmobile is moulded in a tan coloured plastic (below) so can be built up without painting. But a touch of colour makes for a better-looking result, and presents an opportunity to exercise such useful skills as dry-brushing. 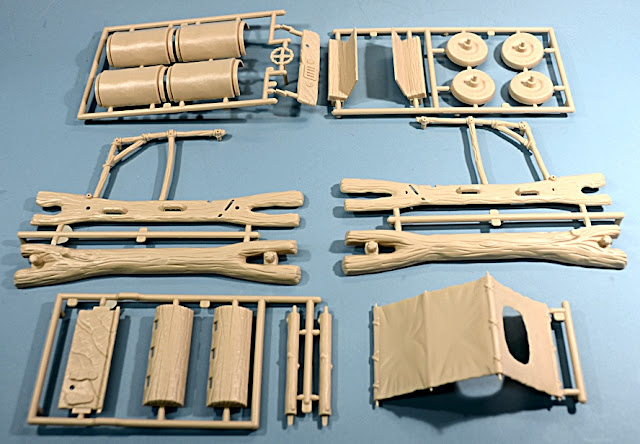 Box, instruction sheet, and card diorama (below). The latter item gives the kit a real lift. 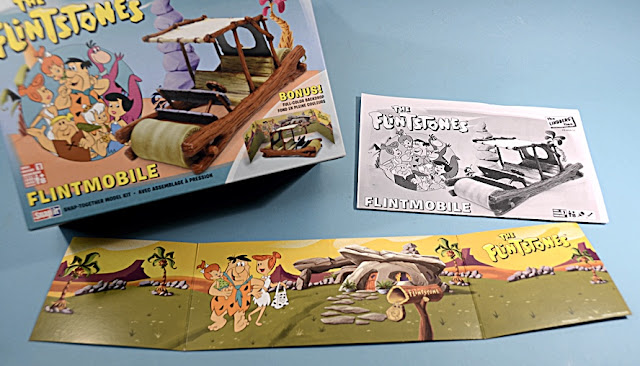 I painted the wooden chassis rails, seats, steering wheel and dashboard in a mid-wood shade, followed by dry-brushing the grain detailing with a darker paint. The roller-type wheels were painted a stone colour, while the roof was sprayed in a lighter, linen shade. All components benefited from an assortment of weathering washes and dry-brushing. 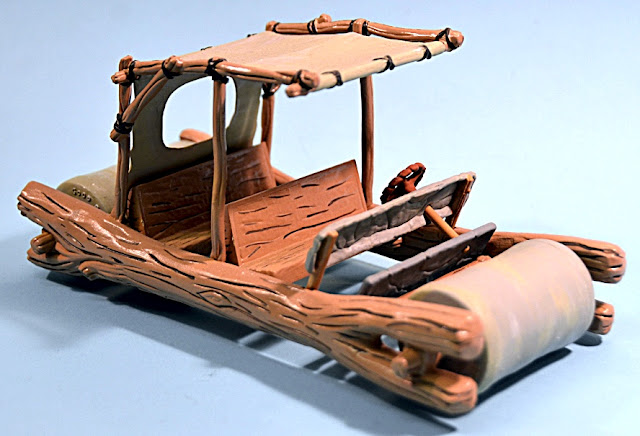 This new kit lacks the original supplied paints. Instead, you get a printed card backdrop, a feature becoming increasingly common with Round 2 reissues, including those marketed under the AMT and MPC brand names. This backdrop assembles to create a two-fold prehistoric panorama that includes the Flintstone house, Fred and Wilma, with their daughter Pebbles being carried by Fred. 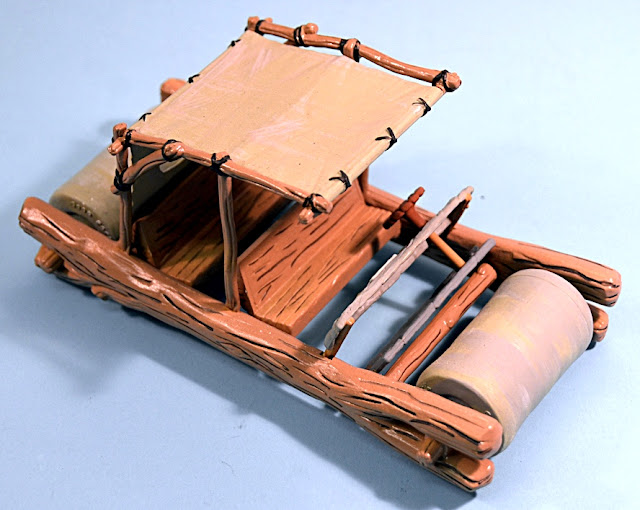 What’s missing from the kit are actual moulded character figures. If Dino, the Flintstones' pet dinosaur, was included, you could perhaps show him sticking his head out of the Flintmobile's roof.

Previous kits did include figures, but no scales were assigned. The early Flintmobile seems to be made to a larger scale, as the Fred from that kit won’t fit the new Lindberg model. However, I found online a set of pre-painted Flintstone figures (below) from a Spanish manufacturer - and these do, more or less, match the scale of the Lindberg kit.

Note that this Flintmobile is the vehicle seen in the live-action movies of the 1990s. It depicts the Flintmobile that was built full-size by Barris Custom, not the one as drawn in the TV-series cartoons. But oddly, the box features the original TV toon characters.

Even odder is the change of scale from the original issue. The first Lindberg kit was 1:20 scale, but is now scaled as 1:25. Actually, this is probably more accurate. I’ve sat in the replica at the Volo Auto Museum in Illinois, and it is pretty big, certainly as long as a standard four-door sedan. This Flintmobile was created as a four-seater, with two rows of seats, whereas the earlier cartoon series was variously depicted with one or two seat rows.

The Lindberg kit compared with its AMT opposite number (below right) from the 1970s. The latter is a two-seater, but is quite a bit larger. The included Fred Flintstone figure is too big to fit in the new Lindberg model. 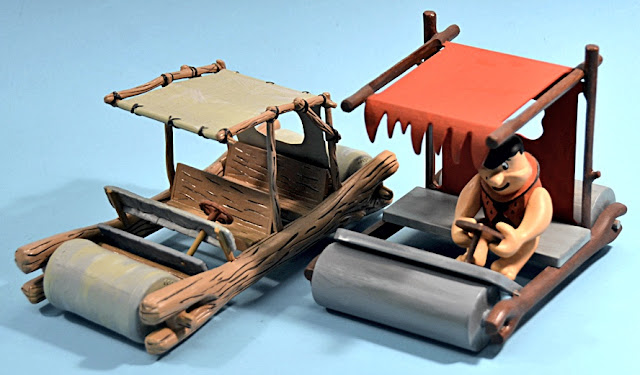 This is actually the second Round 2 Flintmobile, though the first has never been reissued. AMT made a set of three Flintstone vehicles in the 1970s, so consequently as seen in the original cartoon series, these were depicted as a two-seater Flintmobile, Fred’s sports car, and the Dinosaur Rock Crusher.

The Lindberg first-issue box (below) emphasised the live-action movies, though I don’t think the box design itself is anywhere near as exciting as the new one. 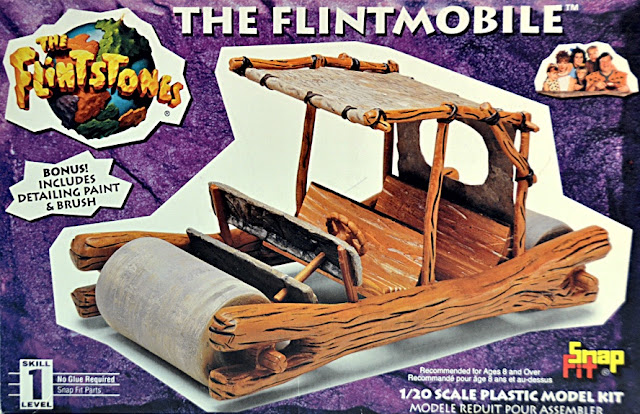 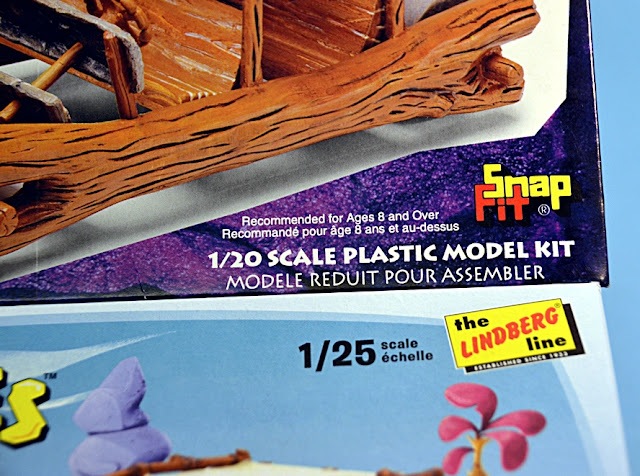 Me in the driving seat of the full-size replica (below) on display at the Volo Auto Museum, Illinois. 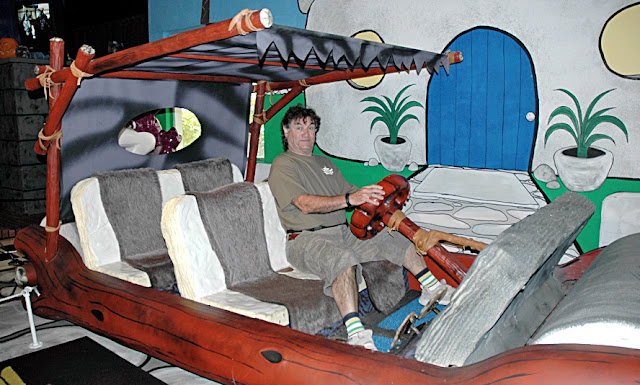 Summation
Simple to make and with a panorama background that looks good too. A shame no figures are included, but even without them, the Round 2 Flintmobile makes an intriguing addition to a star car display.