'WE DID IT' MODEL CELEBRATES A MASSIVE TRANSCONTINENTAL DELIVERY JOB 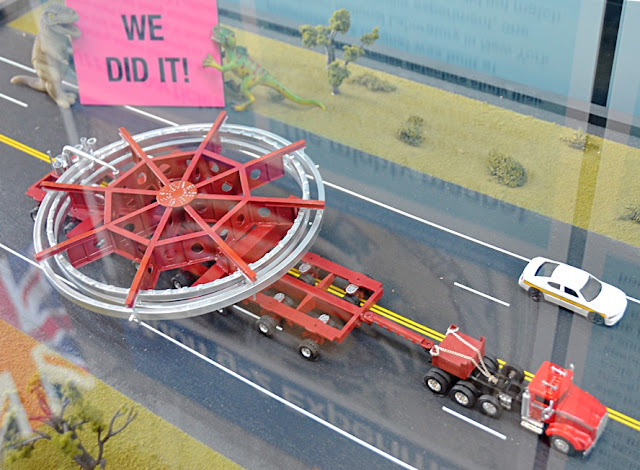 STANDING IN THE VAST CORNFIELDS of northern Illinois is the Fermilab, the world’s second largest particle accelerator. Much of Fermilab lies underground, but in the huge Wilson Hall, a 1:87 scale model displays how a massive piece of equipment was delivered.

Mat Irvine: Fermilab used to be the biggest of its kind, until the LHC (Large Hadron Collider) was built at CERN, Switzerland. But Fermilab’s scientists still perform sterling work, and the facility is now homing in on elusive and short-lived particles, such as muons.

Aerial view of the Fermilab site (below) showing the position of the huge accelerator ring. The Wilson Hall is visible at the 10 o’clock position. 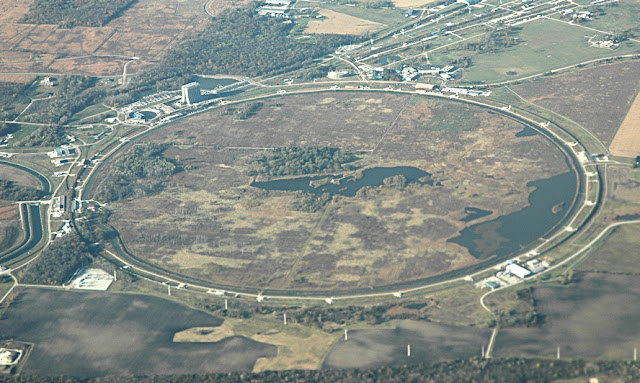 Much of Fermilab is underground, but the landscape above is dominated by the Wilson Hall (below), a 16-storey high-tech structure that combines administration, offices, and various science facilities. 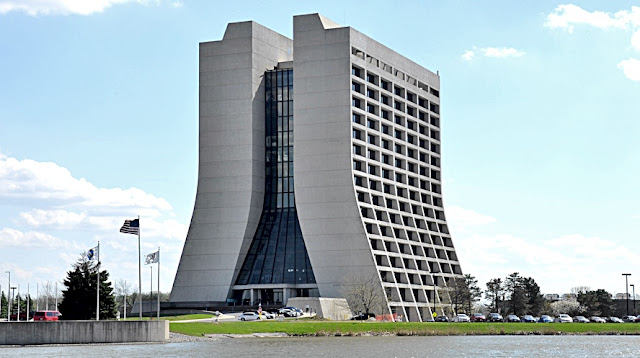 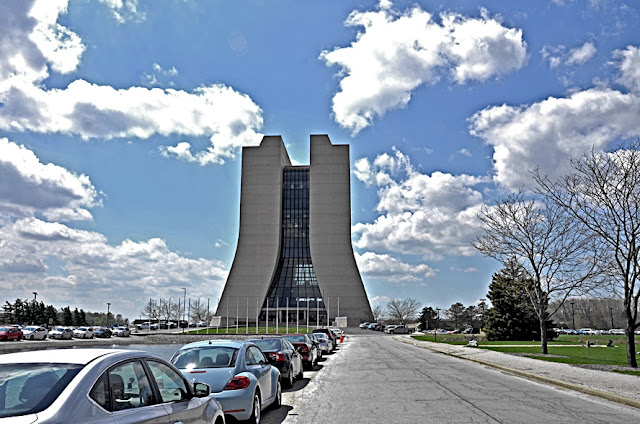 Inside the Wilson Hall atrium (below) complete with plants and national flags. Just to the left, beneath the reception sign, is the model display. 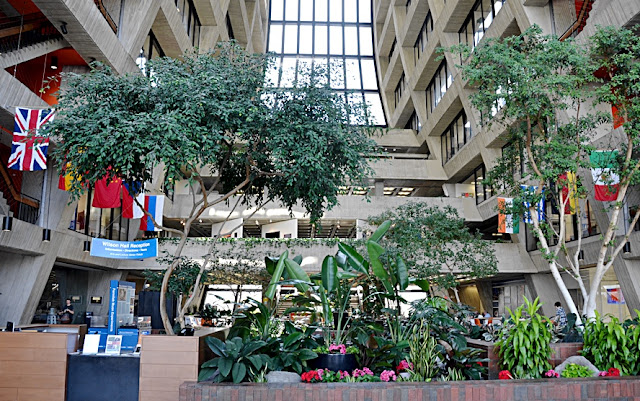 One of the facilities is called the Muon g-2 (pronounced gee minus two) experiment, which explores short-lived particles, found in what we usually think of as ‘empty’ space.

The heart of Muon g-2 is a 15.2 m (50 ft) diameter electromagnetic coil, the core of which weighs some 20 tonnes. The coil was not built at Fermilab, instead being moved from its original home, the Brookhaven National Laboratory, Long Island, NY, where it had been since the 1990s. The coil is housed in the Muon g-2 building (below). 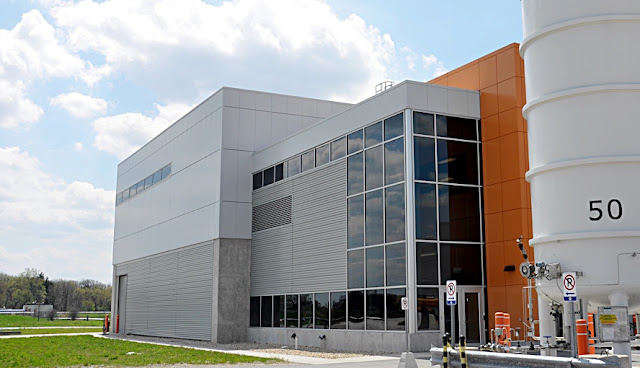 The accelerator ring in working position (below). 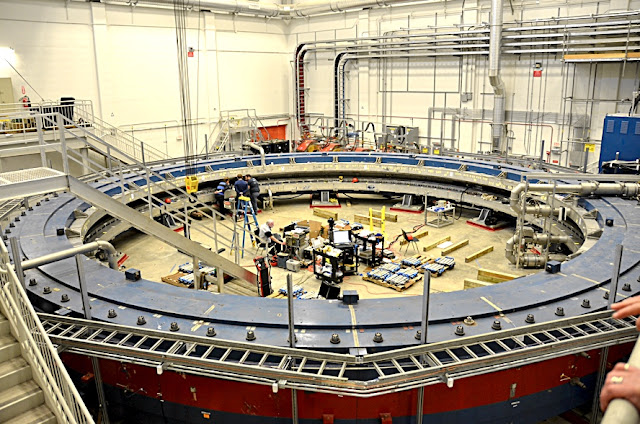 Explanation (below) of 'The Big Move', with the 1:87 scale model diorama on display. 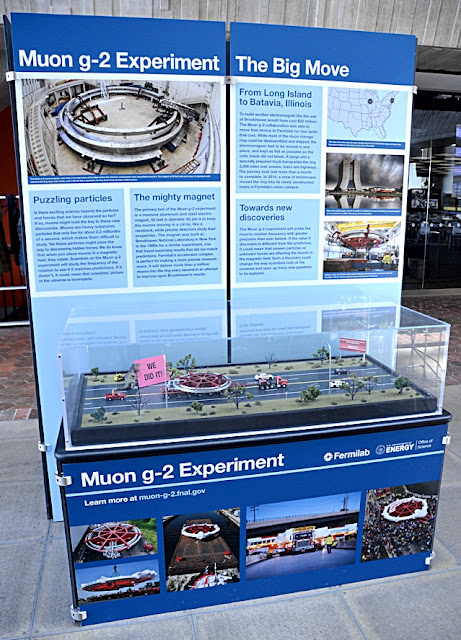 Close up of the explanation board (below). 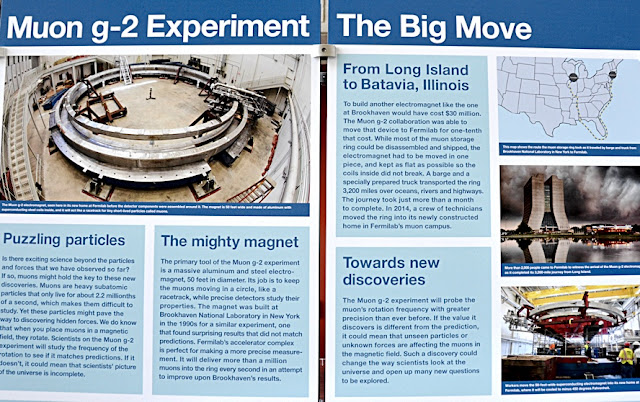 The atrium’s model display (below) depicts the final stages of the journey. The coil’s overall weight was more than 60 tonnes, as it needed a 45-ton support structure to keep its delicate coils rigid.

The main part of the journey from Long Island - a 35-day haul, over a distance of some 5150 km (3200 miles) - was by water, on a converted barge. Trucks were used at the beginning and end of the delivery trip.

The last 24 km or so (15 miles) from the village of Lemont on the Des Plains River to Fermilab took three days. Width was an issue on this final section, with some road-toll structures leaving little room to spare on either side of the coil. However, the destination was reached arrived safely on July 26, 2013, though the coil itself wasn’t moved into position until a year later, on July 30, 2014.

The truck and trailer combo that hauled the coil (below) was reproduced by using existing models. The coil, with its bright red supporting structure, was added afterward as a separately constructed item.

Unfortunately, the display does not credit the model maker, even if a bright pink sign - held somewhat incongruously by two plastic dinosaurs - declares, ‘We did it!’

Incidentally you could ask, why move the coil and not build a new one? Simple math supplies the answer: a new coil would have cost $30 million USD, the move cost just $3 million.

Thanks to Andre Salles from the Fermilab Media Department for his conducted tour. All pictures by Mat Irvine.