FLASH GORDON AND THE MARTIAN: 1:8 SCALE SAVIOUR OF THE UNIVERSE, WITH A SMALL, ALIEN COMPANION 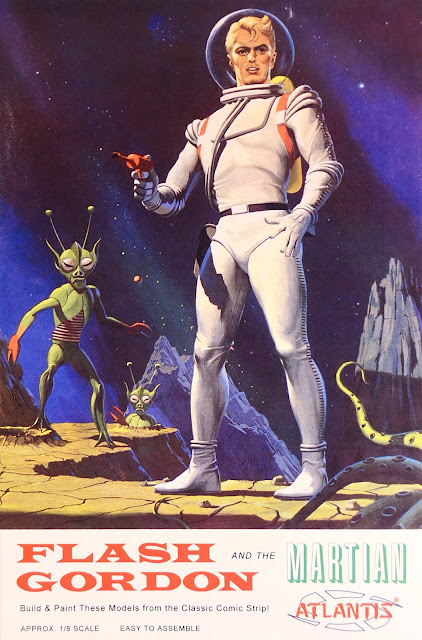 MODEL COMPANIES CONTINUE TO SURPRISE and delight, a trend that is certainly the case with this Flash Gordon and the Martian kit from Atlantis Models.

Mat Irvine: Older science fiction fans may recognise this kit, as it was first released by Revell in 1965, 51 years ago. Flash Gordon and the Martian has not been reissued until now, and the new release even has the same box art as the original.

There were two kits in the original series, the partner kit being the Phantom and the voodoo witch doctor, which has already been reissued by Atlantis.

Flash Gordon and the Martian is a simple kit, intended for ‘junior modelers.’ However, the kit is not a snap-tite product. You need to use cement, though with a limited number of parts (below). 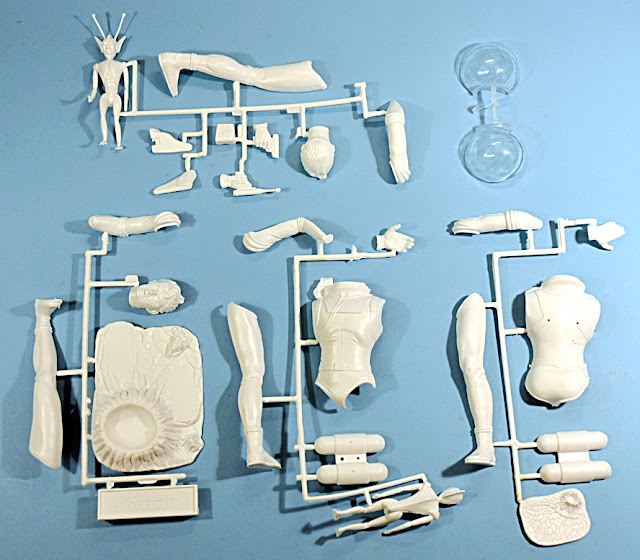 One side of the instructions (below) reproduces the original sell-sheet that Revell issued to hobby stores. 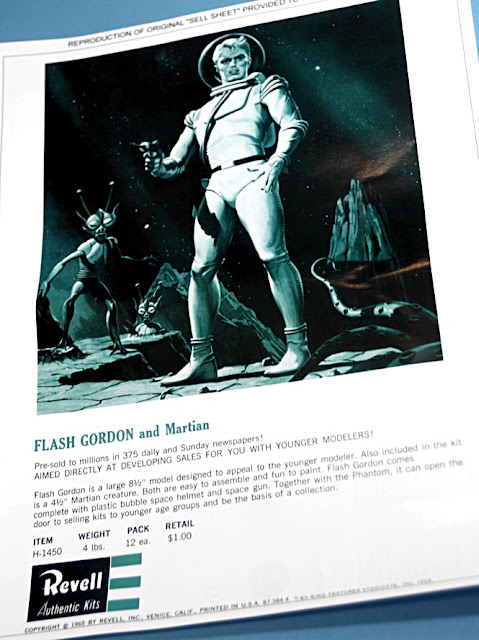 Other side of the instructions (below) shows the straightforward assembly. 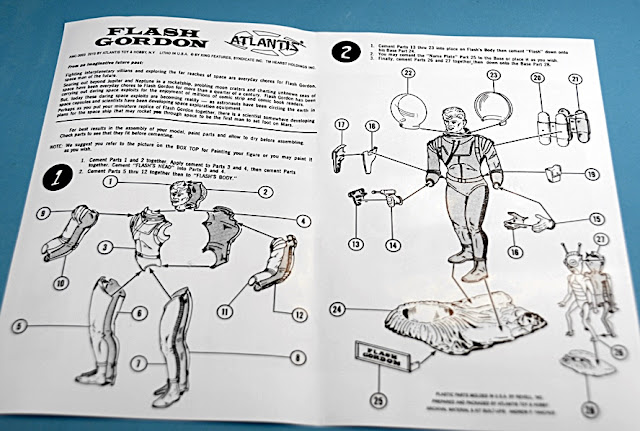 The Martian ET consists of just two components, its front and back. The creature has a base, as does Flash Gordon, and there also is a nameplate. The Flash Gordon figure has 23 components. 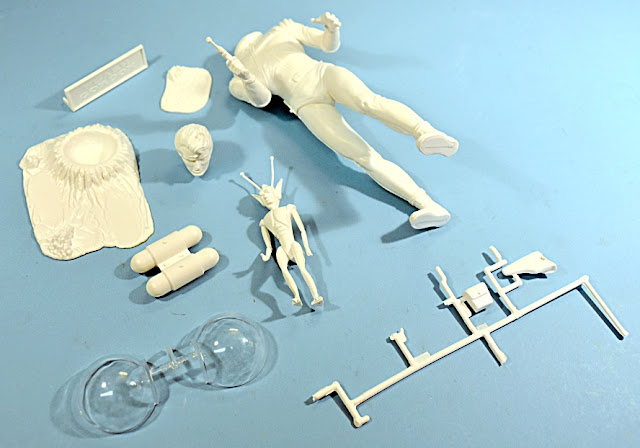 Note that the transparent bubble helmet (below) has to be fitted around the completed head. Once the helmet is assembled, you won't be able to get it off again, so make sure the head is finished first. 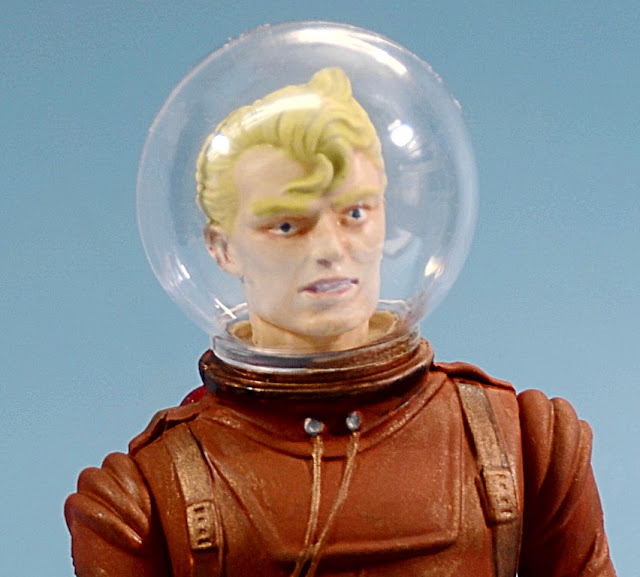 Assembling Flash is a conventional process. His arms and legs consist of two parts each, as are the body and the head. To these basics, you can add the air bottle backpack, a holster and pouch, and hands, one of which holds a ray-gun.

The two-piece transparent bubble helmet has to be assembled around the head. It won’t slip over the top, so make sure that this is your last assembly task, and stick the helmet halves together using a clear modelling contact adhesive, the type also known as ‘watch glue.’ Do not use standard liquid cement, as it will almost certainly mar the clear surface, as will superglue. 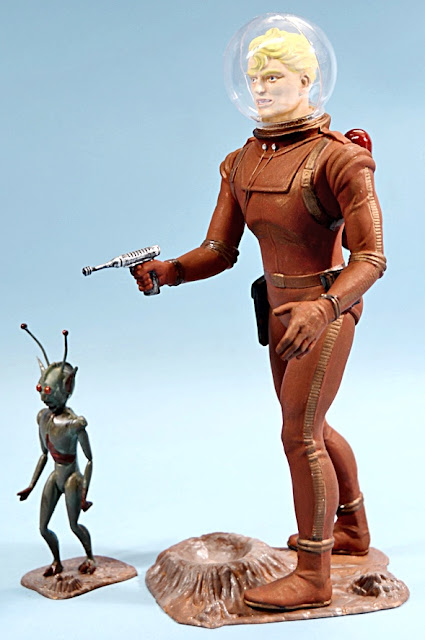 I finished the Martian in, well, ‘Martian’ colours. The box-art and side-panel model show it as green with red patches, so, as these colours seem as good as any, I went this route. 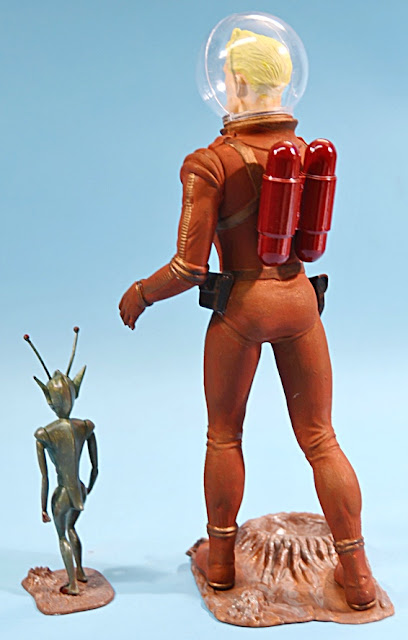 Each figure has his/its own base, which of course needs to be painted in a Martian shade. At least we can be really sure of that finish, as so many excellent colour pictures have been returned by NASA Mars orbiters, landers, and rovers. In 1965, such painting would have been mostly guesswork, interpreting telescopic images. 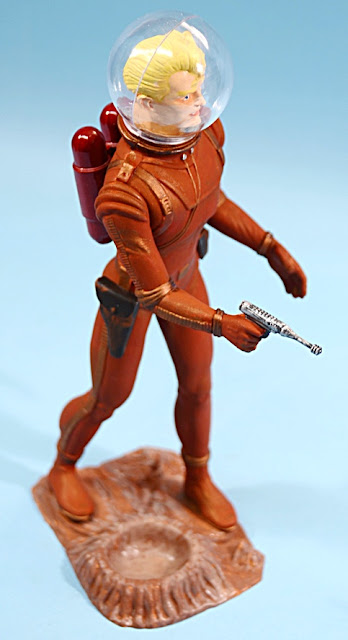 The kit includes a nameplate (below) though only Flash Gordon is mentioned on it. 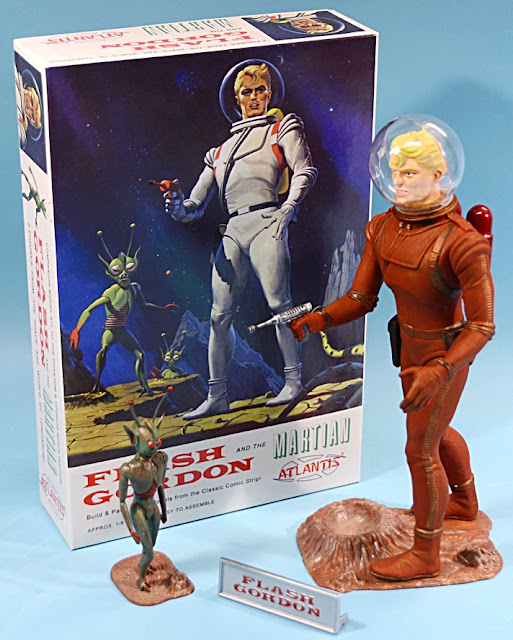 Original kit box from Revell (below) is more than half a century old. 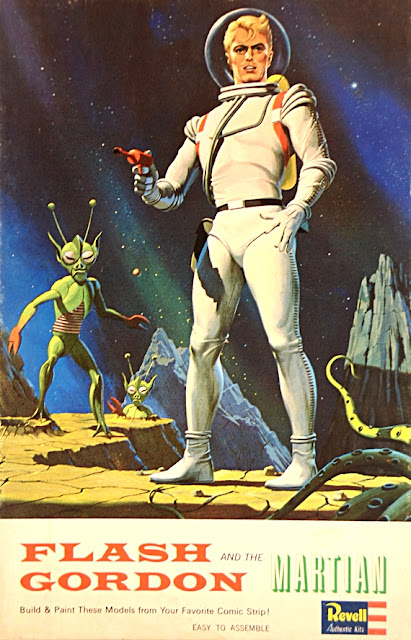 The side of the box (below) which does differ from the original Revell release, shows a built-up contemporary model by Andy Yanchus, one of the original Project Managers with Aurora and long-time kit historian, who assisted Atlantis with this kit.

For the new kit, Andy finished the Flash figure in a metallic-bronze suit, with orange air tanks. I chose a redder shade for the review kit, mixing colours from Humbrol tinlets, adding the straps in a bronze colour. I painted the air tanks in Testors transparent-red spray, over a silver base. 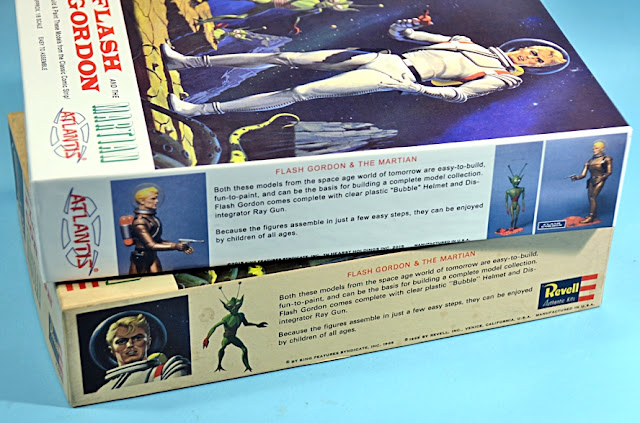 Side panels compared (above) with the new Atlantis kit stacked on the original Revell box.

The original Flash Gordon kit trailed an ad for the companion Phantom kit on one of its sides (lower kit below). 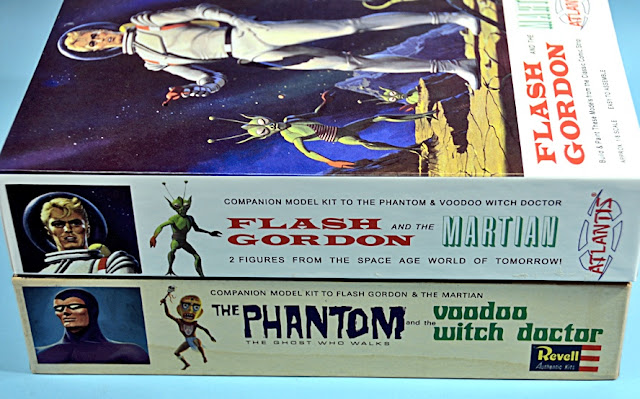 Original Revell box front (above) with its companion kit, the Phantom kit (below). 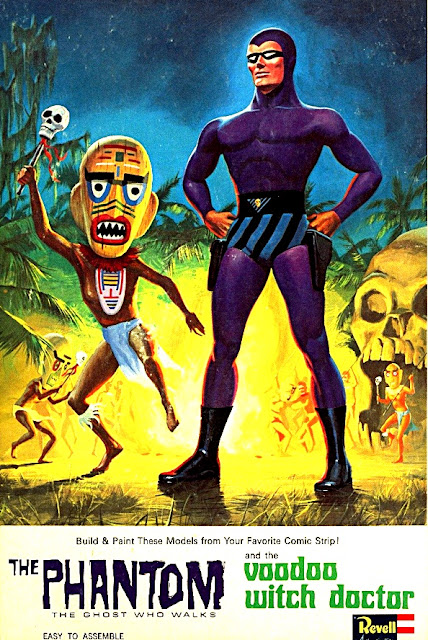 Flash Gordon in cartoons, television, and cinema
Mention Flash Gordon today, and it’s the 1980 movie that probably springs to mind. Sam J Jones starred as Flash and Max von Sydow as Ming the Merciless, backed by a soundtrack by Queen. But this kit dates from 15 years before that, so instead you may think of the black-and-white movies that starred Buster Crabbe as Flash. But no, this ex-Revell kit is actually based on the long-running King Features newspaper cartoon strip, as indeed is the Phantom.

And this could dictate the thorny decision of how to paint the assembled model. Flash is depicted on the box dressed in a white spacesuit, but a casual glance at the cartoon strip reveals that his wardrobe seems more extensive that even Michael Jackson or Lady Gaga. He can be seen in a wide variety of uniforms and spacesuits, in an even wider variety of colours and finishes, so my recommendation is frankly to paint as you like.

Click here to see a Flash Gordon spaceship at a US air museum.

Thanks to Pete Vetri and Rick Delfavero of Atlantis Models, and to Andy Yanchus for invaluable advice on the history of this kit.

SMN note: Flash Gordon has appeared in many guises over the years (below). 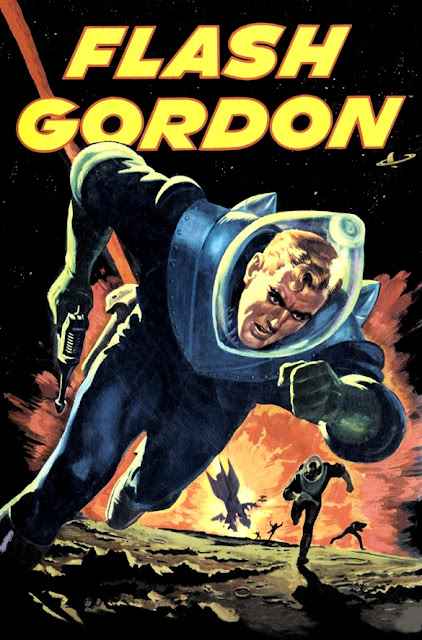 Including his role as a 'plastics representative for the outer worlds' (below). 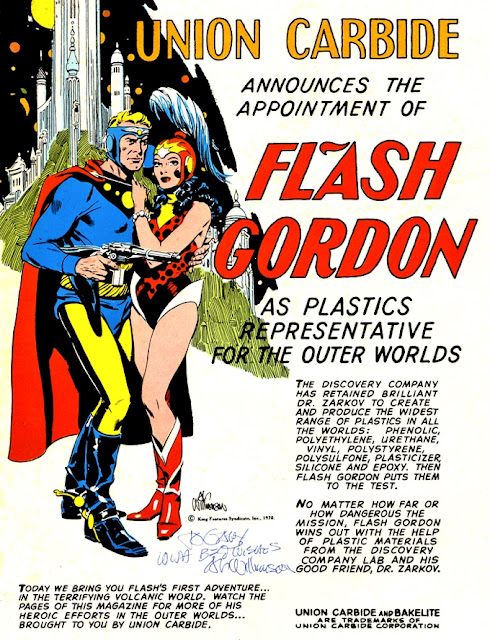 Eagle-eyed science-fiction fans will note that the 1966 Flash Gordon strip (below) featured a sleek spaceship, its design looking suspiciously like Frank Bellamy's Nimbus-1 that had featured in the British Dan Dare strip some years before. 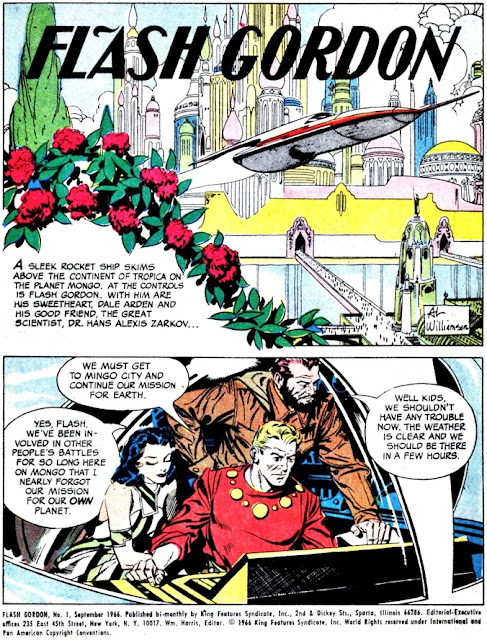 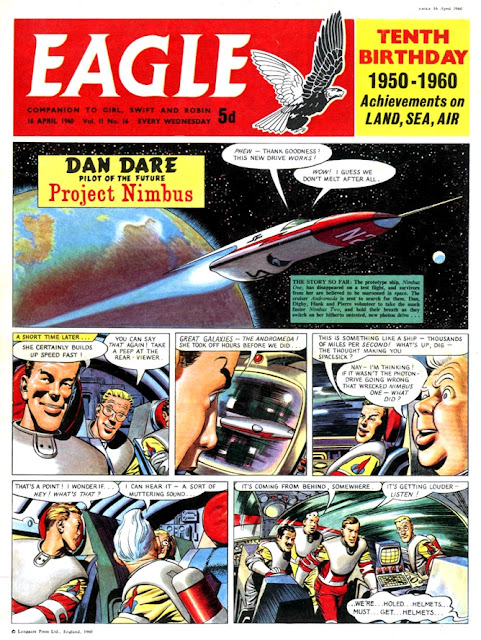 In the 1930s, Flash Gordon appeared in serial form in cinemas (below). The production seems rather quaint now, but at the time, cliff-hanger endings to each chapter guaranteed a keen audience.