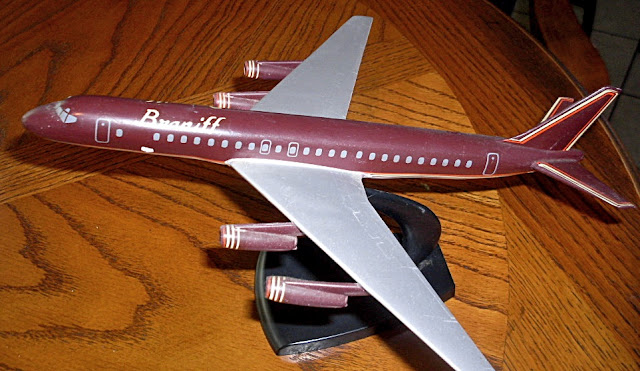 WORLD AIRLINES ARE FAMED FOR their glossy and inventive marking schemes. Whether it's a simple cheat line, or an overall finish like the Braniff jetliner (above) every airline strives for its aircraft to look different from the others at an airport.

SMN report: And that desire for recognition includes using scale models, conceived and built to attract potential customers. They are often used at travel agents, but also come in useful as sales tools at aviation trade shows.

And someone has to make those trade models, because the sort of plastic kits we are used to are simply too delicate. Biffs and bangs, being dropped on the floor, or nudged off a desk by a customer are all part of a day's work for trade items like this. And that's where professional model makers step in, to make simple miniatures, specifically designed to resist constantly being in the line of public duty. It's not a new business though, for models like these have been used since the early days of commercial flight.

The fascinating video (below) gives you an insight into model making in the late 1950s.


The curvaceous Lockheed Constellation (below) was an airline favourite throughout the 1950s and early 1960s. Constant scale is not a particular aim with these models though. What's more important is a size that will fit comfortably on a convenient shelf, desk, or window display. Note also there are few, if any, of the delicate items that we like to see in a plastic kit. Landing gear or antennas are rarely included. 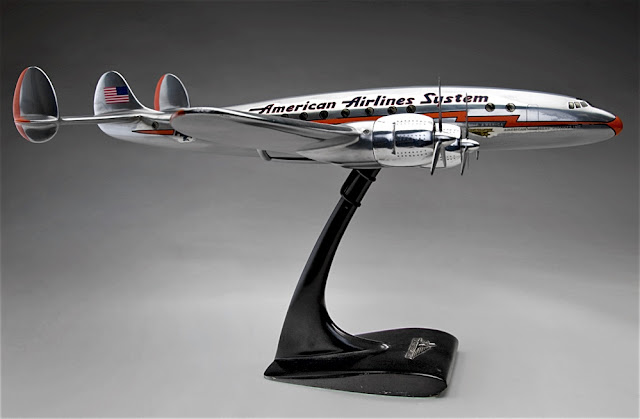 It's not just Western aircraft that make the display model fleet. The Ilyushin swept-wing miniature (below) dates from the late 1960s, though it doesn't advertise an airline. Instead it was used on the manufacturer's stand at airshows and trade fairs. Note the 'Illy' logo on the nose. 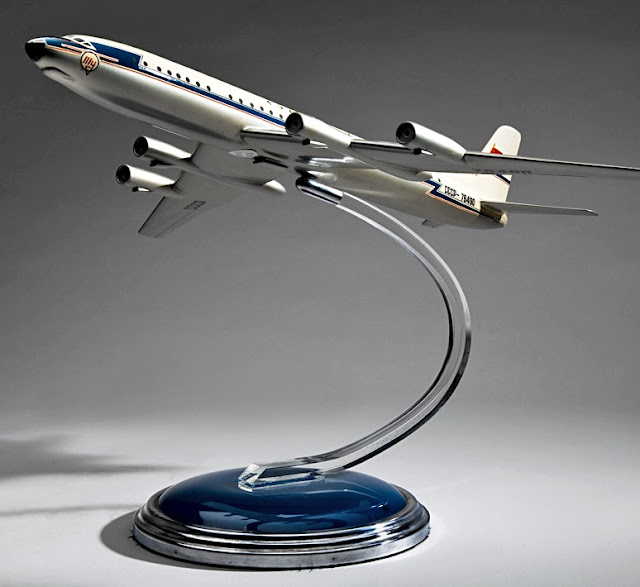 Braniff Airways painted its jetliners in many colours, including this 'metallic purple' DC-8 (below). The 'jelly bean' fleet made Braniff aircraft instantly recognisable at airports, no bad thing at all for promotional purposes. The jelly bean shades were part of a big design overhaul that included an ad campaign spearheaded by the phrase, 'end the plain plane.'

Lighted cutaway models have been familiar display items, to be seen in many large travel agents. Models like the TWA Boeing 747 (below) gave customers something interesting to look at, and were usually objects of fascination for children.

A 2014 promotional pic (below) of a linkup between the Asian airline Viet Jet and Hahn Air from Germany. Look closely and you can see a model Airbus A320, a type widely used by Viet Jet. 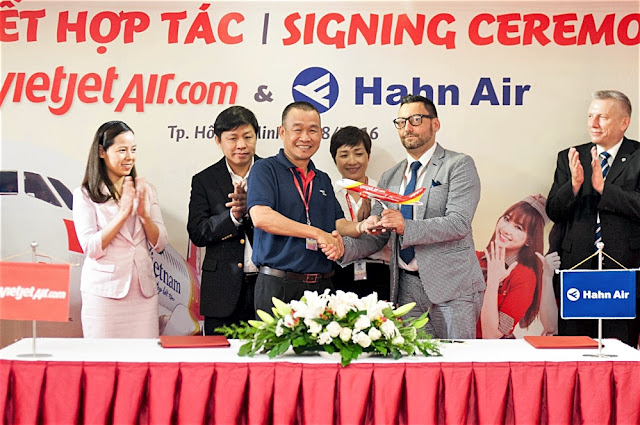 Summation
Are we looking at the end of the era of trade model planes? After all, most people book online now, and models are not needed when clicking on a website menu.

But there are still plenty of opportunities for trade model makers. Travel agents still have premises on most high streets, so it's likely that there will be a continuing demand for such models, even if their golden age has passed.

And international air shows such as Farnborough, UK, and Paris, France, are big business, and there are few manufacturer's stands without a range of models on display.