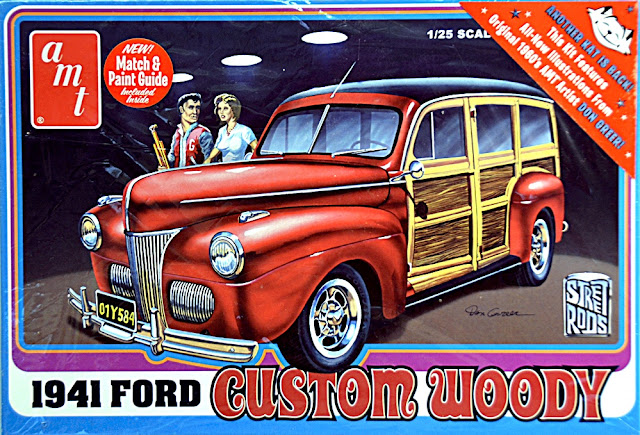 THIS 1941 FORD ‘WOODY’ STATION WAGON is a reissue of a kit that first appeared during the time the AMT name was owned by Ertl.

Mat Irvine: These types of kit were part of a range that had started as the Trophy Series, running alongside the Annual kits produced by the original AMT Corporation. The Trophy Series then spawned a sub-division called Street Rods. This Ford Woody kit reflects that story by using a new illustration, painted by Don Greer, one of the original AMT box artists. 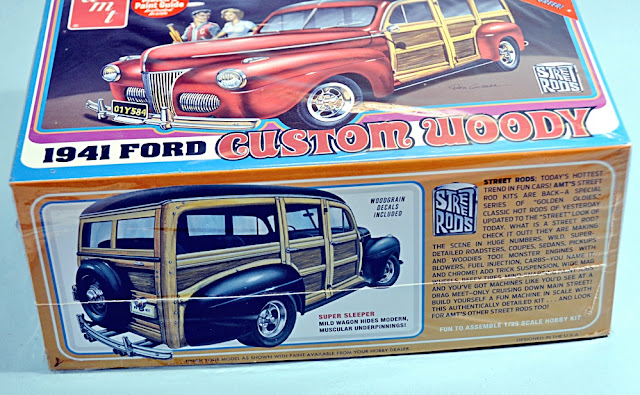 Box side-panels (above, below) show some of the included features, such as the modified V8 engine, and surf board. 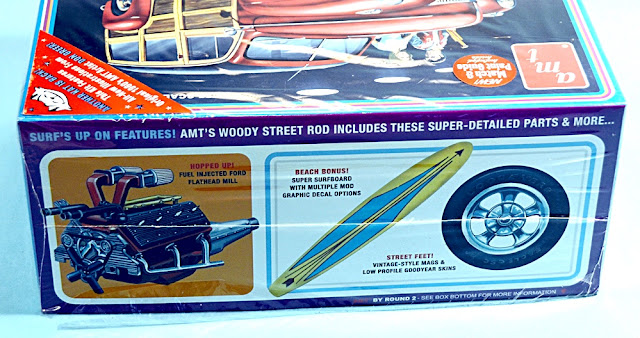 The model is basically a 1:25 scale miniature of a stock 1941 Ford Woody station wagon, but with some modern touches. These come down to a custom version of the original flathead V8 engine, a modern street rod chassis, mag wheels, and a set of modern radial tyres. The body itself remains completely stock, true to the 1941 original.

The 96 components (below) are moulded mostly in white, with chrome, clear, and black vinyl for the tyres. 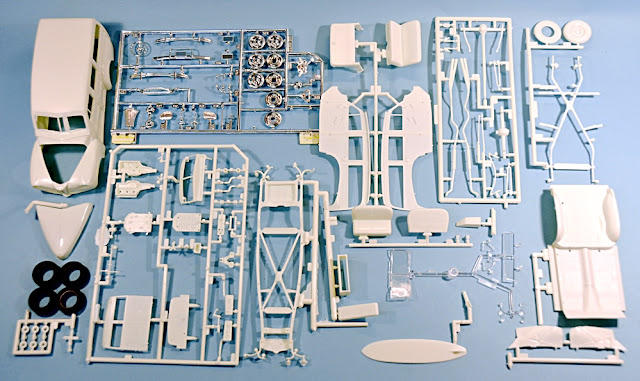 You get a lot of paperwork with this kit. Besides the instructions (below left), there are decals (middle), a paint guide (top) and the now usual miniature reproduction of the box (right). 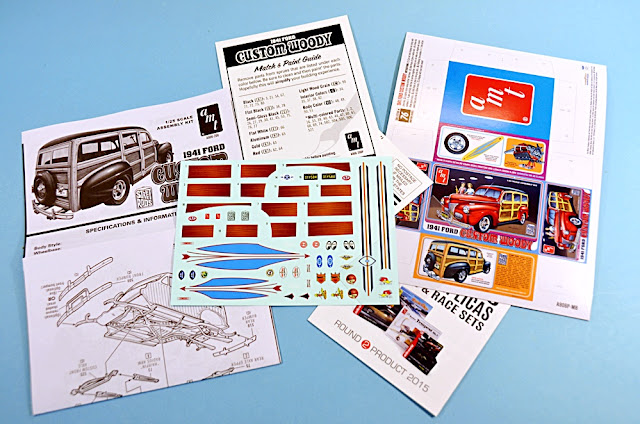 Completed model (below) with the printed miniature box, as yet unassembled. The green paint, mid-brown wood surrounds, and satin-black roof were all painted with suitable Testors paints. The wood-effect inserts are applied using the decals supplied in the box. 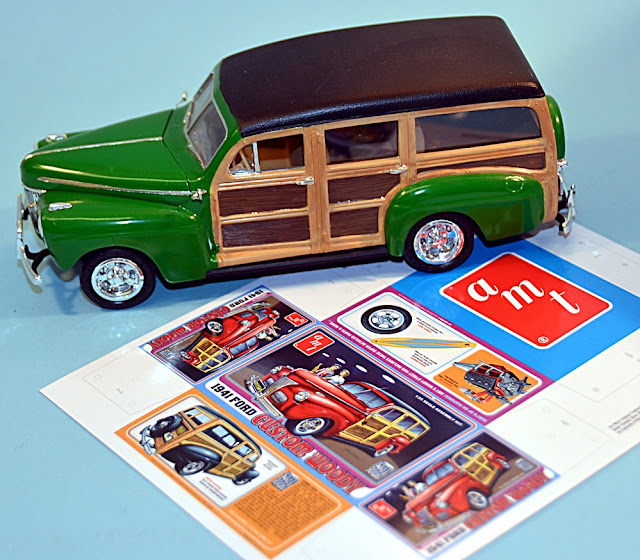 The kit introduces an interesting way to hark back to the old days of model making. The transparencies for the windshield (below) and rear windows are made of conventional injection styrene, but the side windows need to be cut out from a supplied acetate sheet. It’s a slightly trickier job to carry out, but the result does provide a window thickness that’s more true to scale. 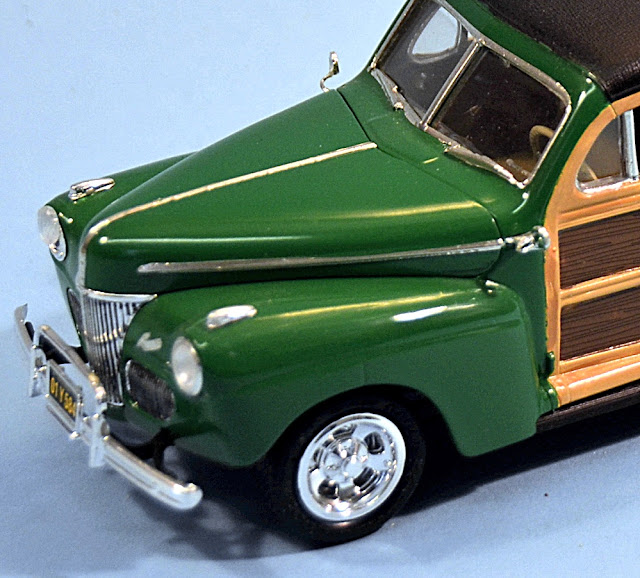 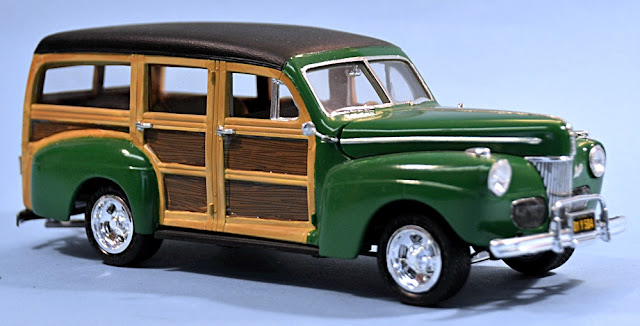 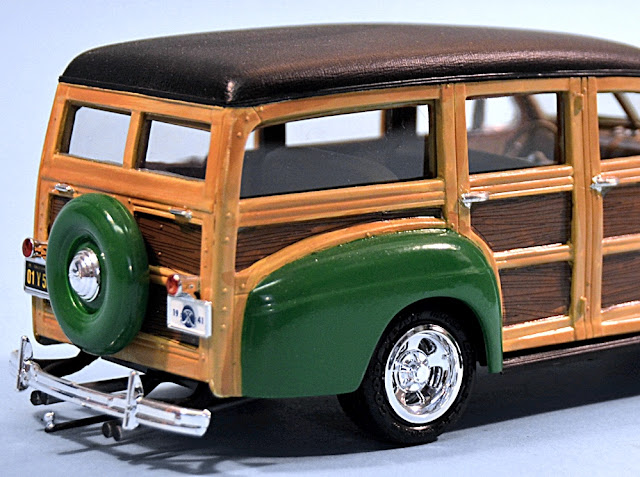 The hood is removable, though hinges are not included. Lift it off (below) to see the souped-up, flat-head V8 mill. 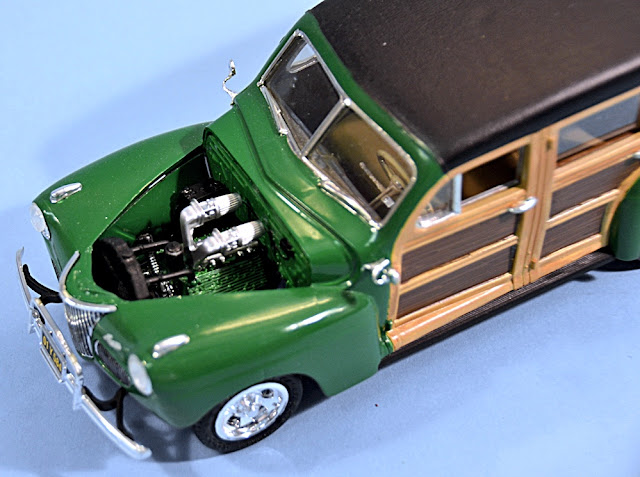 Summation
A well produced reissue kit, which includes some neat final touches. These include a set of printed wood panels on the decal sheet and, obligatory for a Woody, a surf board.

SMN note: The nicely finished model (below) has enough added details to create visual interest. The lowered suspension and whitewall tyres help provide the custom hot rod look. All the Woody needs now is a group of surf dudes and dudettes, plus a backdrop. The result would be a fascinating mini-diorama, reflecting beach life in the mid-20th century. Pic courtesy Hot Rods and Jalopies. 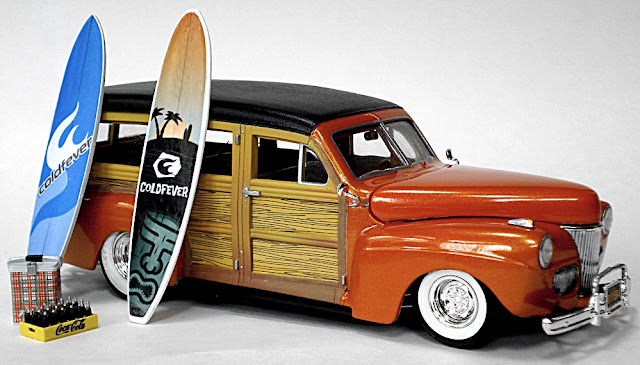