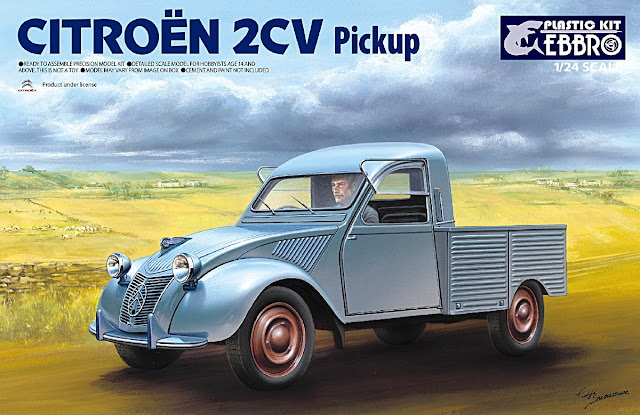 A DETAILED KIT OF AN UNUSUAL FRENCH MODEL describes the Citroen 2CV Pickup, a 1:24 scale release from Ebbro of Japan.

Mat Irvine: There are two surprising facts about this model - one with the kit itself, and one with the subject. Regarding the kit, although it is based on the Citroen 2CV Fourgonette van, which Ebbro has already produced (SMN review here) using the Tamiya 2CV saloon as the basis, this kit isn’t based on that Tamiya original - it is a totally new kit. The other fact, perhaps more surprising, is that the kit is based on a version of this archetypal French car that was devised and built in the UK.

But first to the Ebbro 2CV Pickup kit. It differs completely from the Tamiya version and no parts are duplicated. In addition, the 2CV Pickup is the opposite of the Tamiya in that it has no engine detail, but does have separate doors. These are not hinged, but can be fixed in open or closed positions.

The Ebbro 2CV Pickup is fairly complex, with 100 components (below). 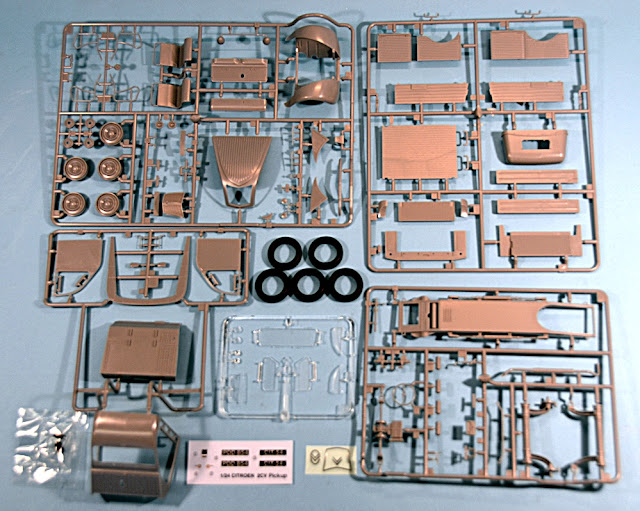 The chassis is somewhat simplified, compared to that of the Tamiya. The Ebbro kit does not have an operating suspension, but the front wheels can be posed in straight ahead or steering to left or right.

Ebro 2CV Pickup moulding (below left) compared with a Tamiya 2CV, shows that the two are completely different. 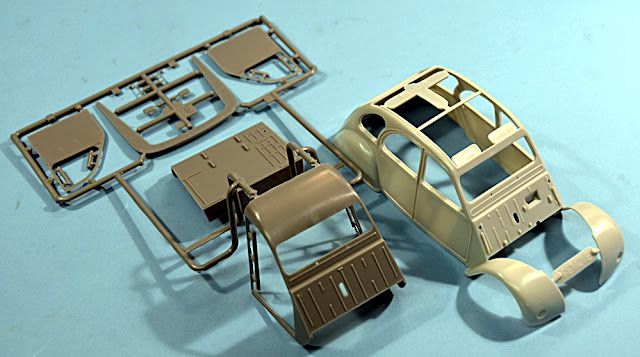 The interior of the Ebbro 2CV Pickup includes two seats, and although the kit is supplied in right-hand drive form, there are left-hand drive options, as well. 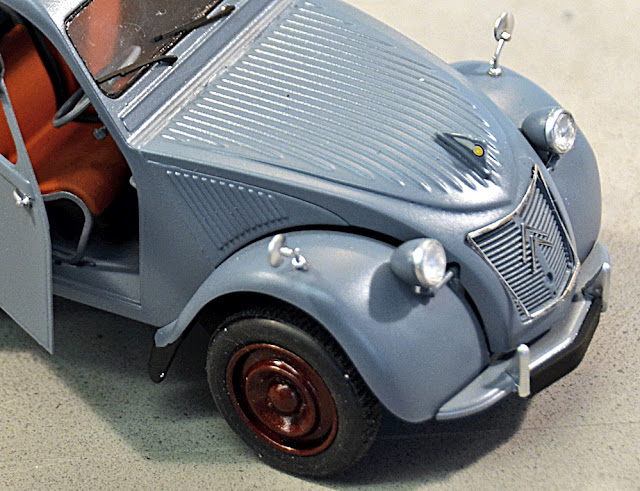 The Citroen 2CV Pickup was modified from the Fourgonette van, so the front section is classic 2CV, though there are distinct differences to existing kits, as the Ebbro Pickup represents an earlier version. The kit’s rear load bed is new, being based on an original that was designed and built at the Citroen factory in Slough, west of London.

The Ebbro kit (below) has three main sub-assemblies. 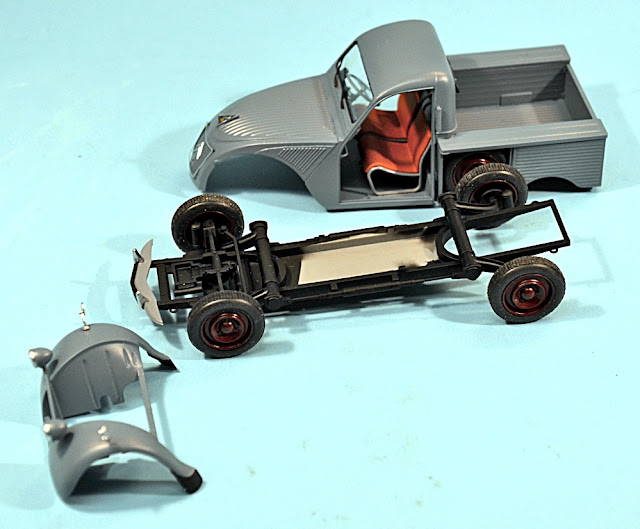 The boxy side sections hide the fuel tank and spare wheel, while the tailgate, although intended to be assembled in the raised position, can be shown folded down as the hinges are separate components. 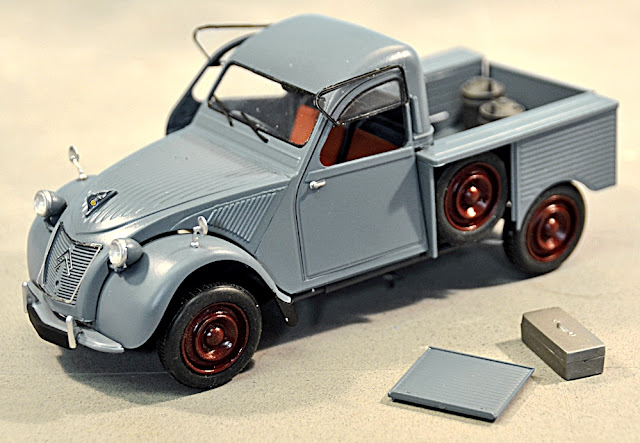 As with all 2CVs, the windows simply opened out and upwards. This action is replicated in the Ebbro model, as it is for the rear window. There are separate parts for trafficators (an early form of indicator) and optional door and wing mirrors.

I finished the window frames (below) by masking them with Tamiya tape, and painting with Humbrol Satin Black. 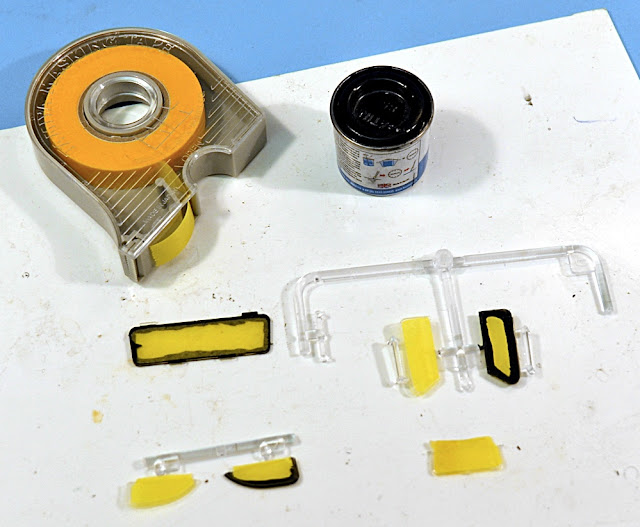 Ebbro’s suggested colour scheme is a bit vague. There doesn’t appear to be a contemporary colour photograph, and the instructions state ‘Royal Wright Grey’ which seems to be a mistranslation. The name doesn’t match any official Fleet Air Arm colour, which was a problem for me, as I wanted the model to represent a British military version.

The box shows a finished kit in mid-grey, while the art shows a bluer shade, so I decided on an intermediate blue, which has a ‘naval’ feel! The wheels are an odd reddish metallic colour, which seems authentic. The interior is almost certainly grey, through Ebbro’s assembled model has seats in red, so take your pick. 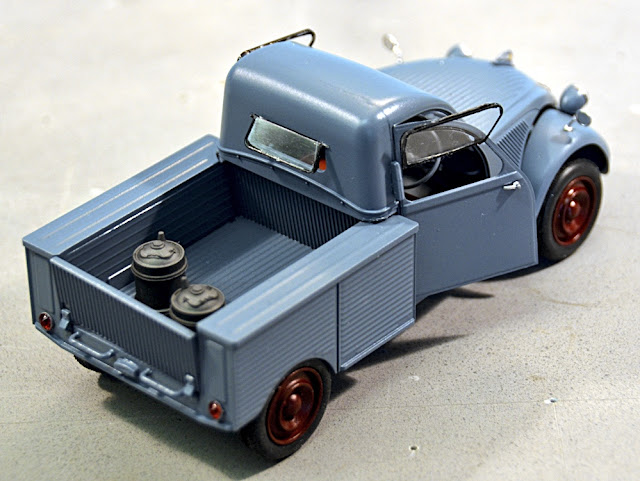 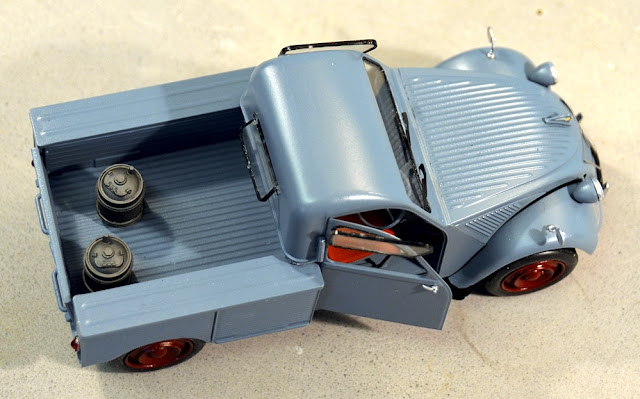 No loads are supplied with the Ebbro kit, but the load bed should be carrying something. The accessories (below) were sourced from various AMT racing car kits. 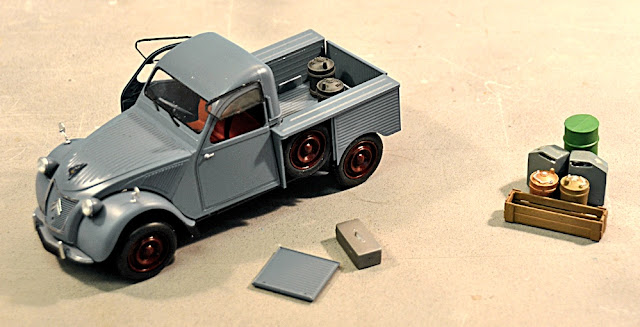 British military Citroens
Citroen had various subsidiary companies around the world, and having one in the UK was logical, as it could supply right-hand drive vehicles to British home and overseas markets. However, the 2CV Pickup came about as a suggestion by the Fleet Air Arm (FAA) that wanted a lightweight vehicle to be carried on board ships and deployed wherever required.

The photo (below) shows Royal Marines with two 2CV Pickups. The jungle dispersal makes it likely that the vehicles here were finished in olive-drab, rather than blue. Note the roof grab handles, and the extra rear-quarter windows.

The Land Rover would seem to have been the most obvious choice for an FAA purchase, and at the time there was also the similar Austin Gypsy. But the 2CV Pickup was likely half the weight of either, which made it helicopter-portable, and so 65 were ordered. The contemporary illustration (below) from a French publication clearly shows Westland Whirlwind helicopters airlifting the vehicles, probably from the deck of the commando carrier HMS Bulwark. 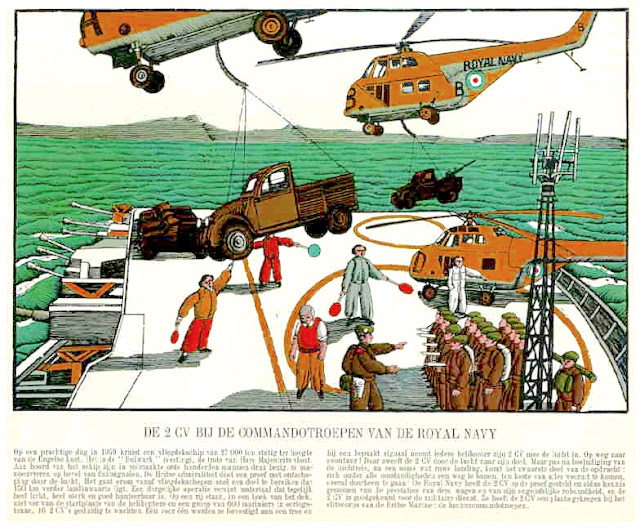 Fleet Air Arm 2CV Pickups seem to have had wing mirrors, but that might not always have been the case. The bonnet carries an ornament - seemingly unique to Slough-built vehicles - which proclaimed ‘Made in Britain.’

The ad (below) is from the British arm of Citroen, and features both Fourgonette ('Van') and Pickup ('Pick-up') versions. 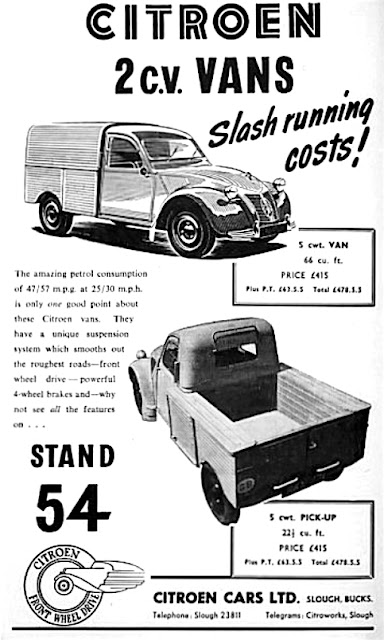 Summation
Overall, an interesting model from a relatively new (since 1998) Japanese company that produces some very intriguing models. Besides the 2CV commercial vehicles, Ebbro is of course the first to make a Citroen DS 19 in 1:24 scale. Look out for an SMN review of the Ebbro DS 19 soon.

Ebbro promotional pix (below) display a 2CV Pickup in a neat, if plain, mid-grey paint scheme. 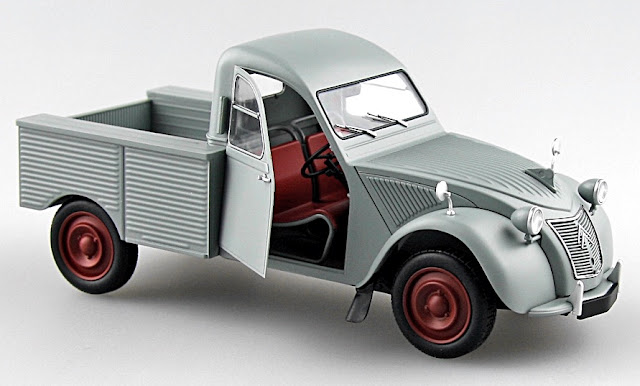 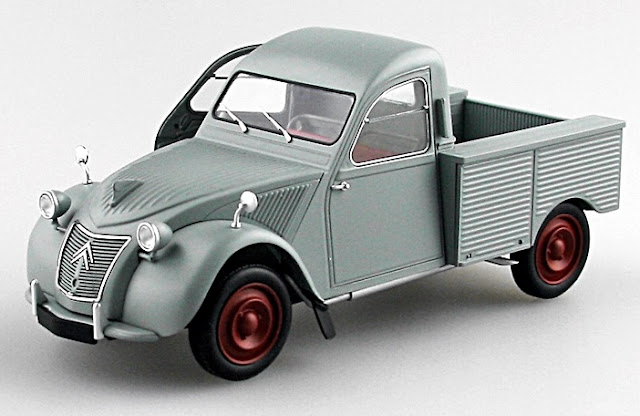 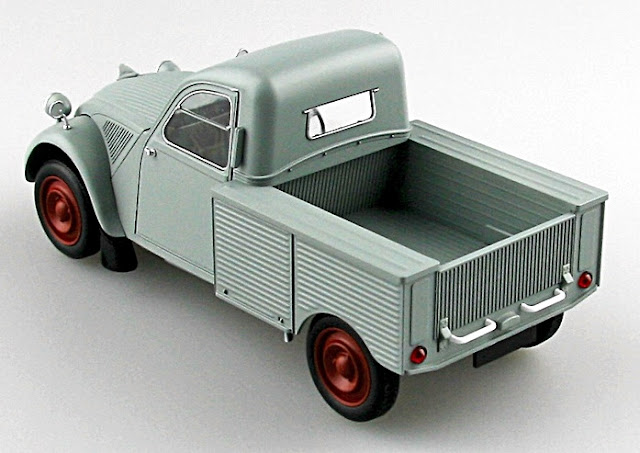 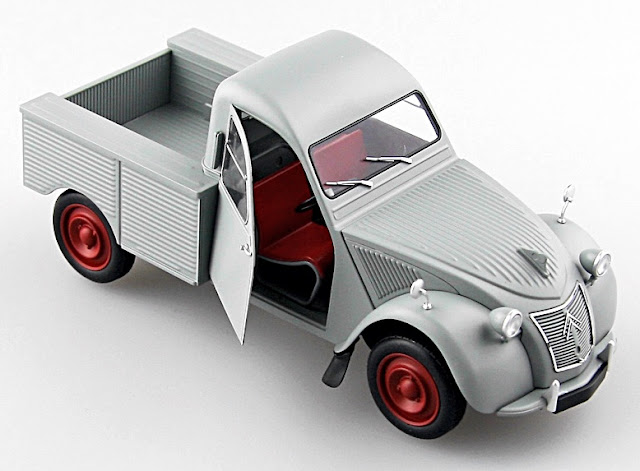 SMN note: The Citroen 2CV had plenty of styling variations during its manufacturing lifetime. The Citroneta pickup (below) was produced for South American markets, this particular car being a 1961 example, seen in Chile. 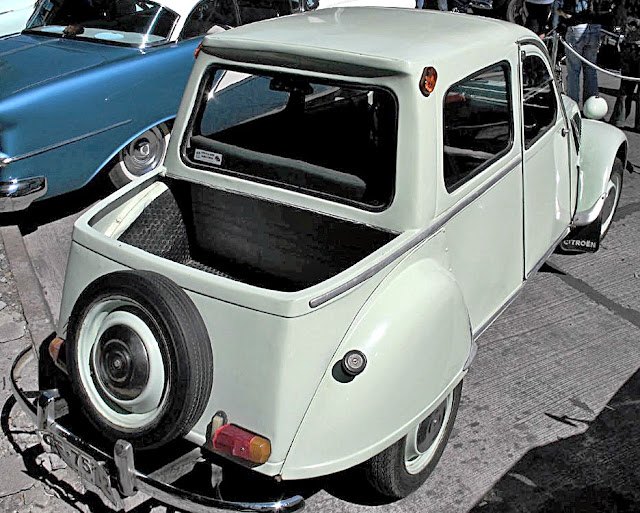 A more extreme modification was the Citroen Bijou (below) produced in the UK from 1959-64. A small coupe, it had a glass-fibre body, designed by Peter Kirwan-Taylor, better known for his handsome Lotus Elite of 1957. 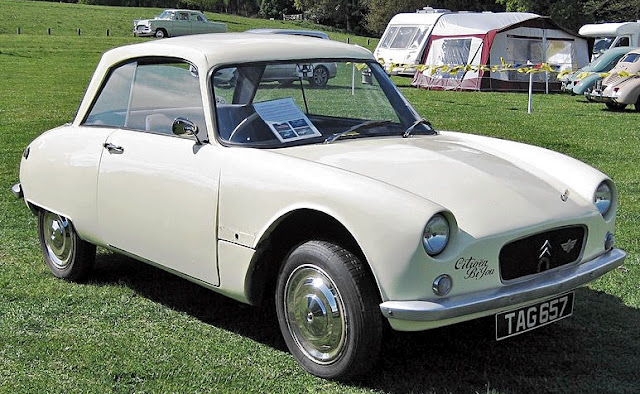 Thanks to The Hobby Company for the sample kit.