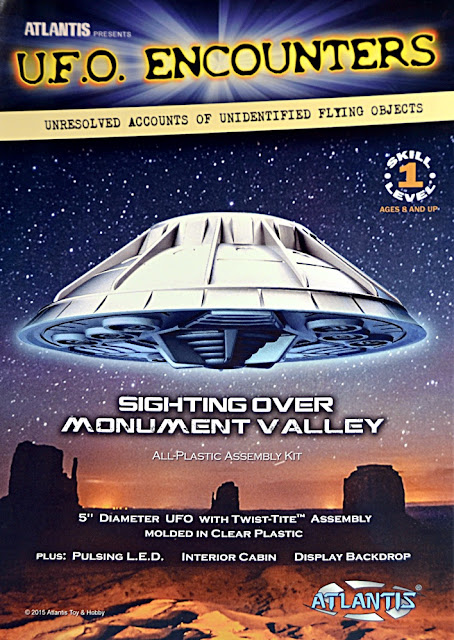 HERE'S A NEAT LITTLE KIT for UFO enthusiasts. The Atlantis Models kit is easy to build and includes a lighting pack for after-dark encounters.

Mat Irvine: This UFO kit is the latest in the Atlantis Models series titled, ‘Unresolved Accounts of Unidentified flying Objects.’ This kit focuses on a supposed sighting over Monument Valley, on the borders of Arizona and Utah.

Straightforward instructions are printed on the back of the box (below). 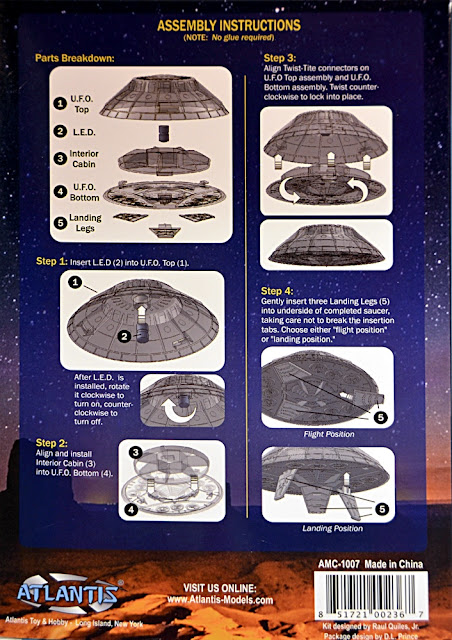 The Atlantis UFO is 127 mm (5 in) across when assembled, and has just six components: upper and lower sections, an interior crew section, and three landing legs. Putting them together couldn’t be easier, as Atlantis has used its Twist-Tite assembly system, so assembly is a cement-free experience.

The final display can show the UFO’s landing legs extended in landing position, or retracted in flight mode. Atlantis also supplies a three-legged table stand on which you can pose the UFO if you wish to see it above the ground.

What you get (below) in the colourful box: six transparent components, a tripod table for flight mode display, plus a two-part backdrop. Not pictured here is the included LED assembly. 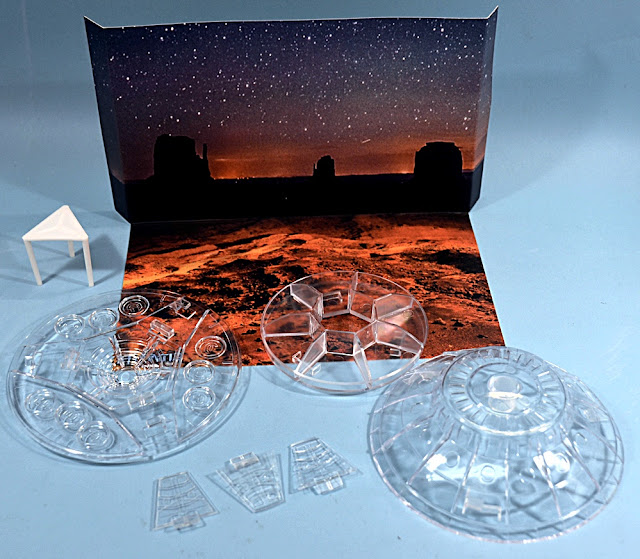 What makes the Atlantis Models Monument Valley UFO a little different from competitors is the included battery-powered LED lighting system, and the supplied diorama, a card backdrop  of Monument Valley, on which to display the finished model.

The LED fits in the top of the upper UFO section. Upper and lower halves simply unclip, allowing you to switch the LED on and off (below). 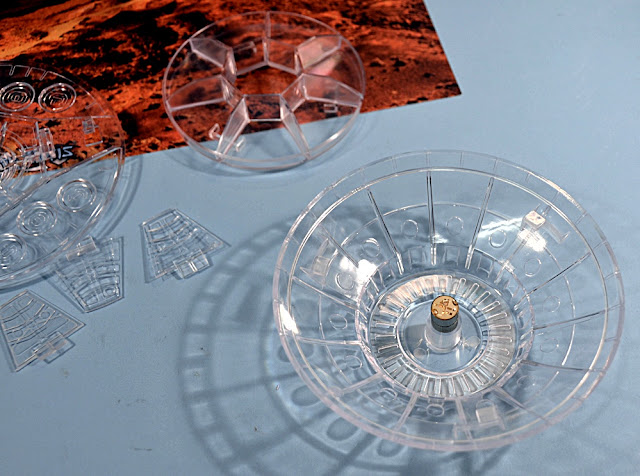 The parts are moulded in transparent plastic, so any window areas you want to remain clear will need masking. The easiest solution for this is to use small blobs of Bostik Blu Tack (below) pressed over porthole openings so they remain free of paint during the spray process. Blu Tack, unlike many similar products, allows paint to dry on its surface. Others don’t, so using them means that you stand a good chance of ending up with a damp, soggy mess. 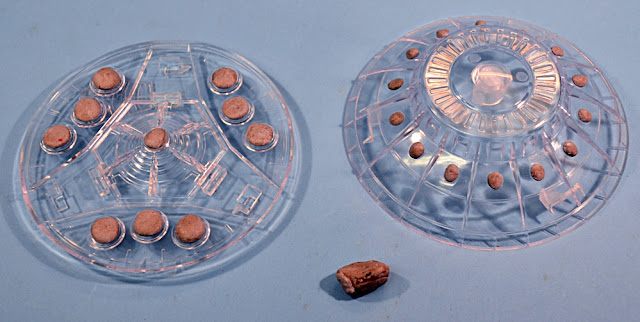 Colour is… well, as it’s a UFO, what you choose is totally up to you. If you can find an actual example of course, use the colours you see in the sky. Otherwise, most UFOs seem to be silver, which was the starting point I took (below). Here, the three main sections have been given their final coat of paint.

I used Humbrol 191 Chrome Silver as a base coat, over which I added a variety of Testors transparent colours. When spraying was finished, I peeled the Blu Tack off the portholes and engines. Then I installed the LED, a simple process. 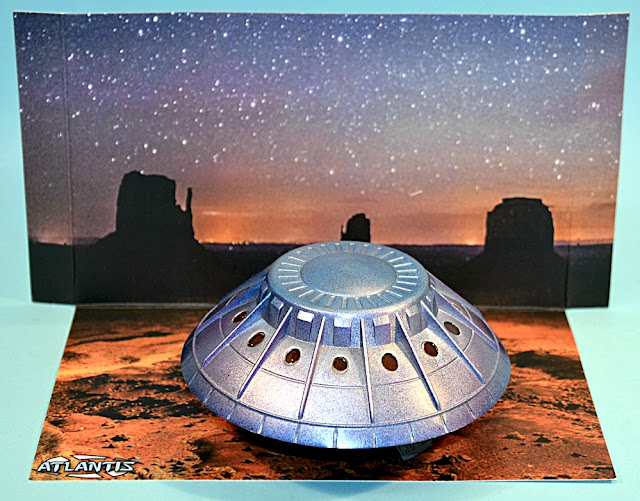 When I had the lighting tested and operational, the UFO was ready for show on the Atlantis diorama display (above, below). This comes in two parts, ground and backdrop, and gives a very satisfying overall result.

The UFO’s underside (below) with two of three landing legs extended, and the LED in operation. It flashes red and blue. 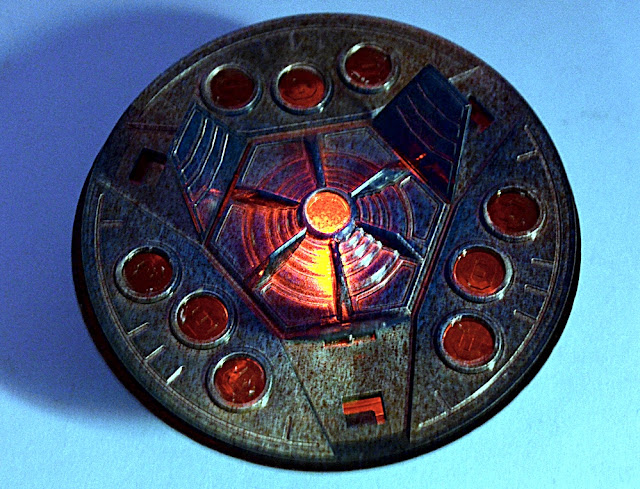 A visit to Monument Valley (my pix below) shows that it is every bit as grand as you will see in the cinema. I recommend it highly for any visitor to this part of the USA. 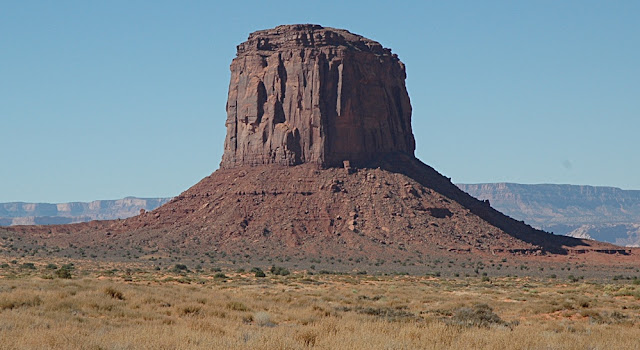 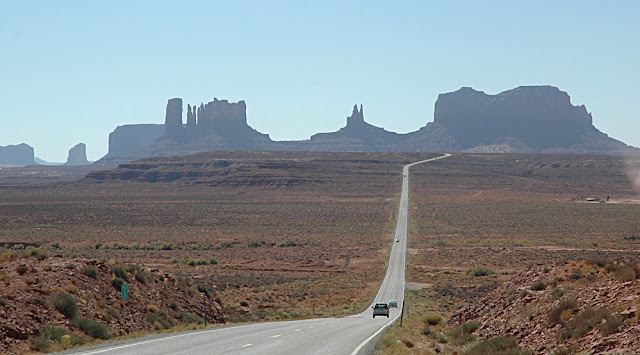 Summation
A nice little kit that even a non-model maker can assemble without too many qualms. Once the components are given the Twist-Tite treatment, it’s a simple step to switch on the LED light show, find a dark area, and put on a diorama display of a ‘Sighting over Monument Valley.’

SMN note: We'll feature a mini-movie of the flashing LED soon. Keep a lookout for this.

Thanks to Atlantis Models for the sample kit.