MAT IRVINE MEETS A TRANSFORMERS BUMBLEBEE CAMARO, AND A MINIATURE NEXT TO IT 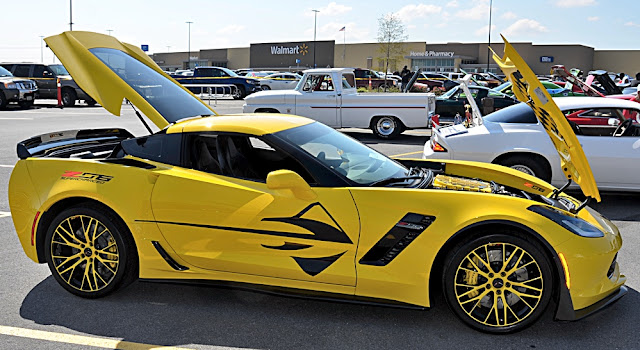 A TRANSFORMERS CAMARO COMES TO THE Texas town of Killeen, as Mat cruises by, camera at the ready.

Mat Irvine: There you are, driving down an Interstate, when you need a pit stop. There's a Walmart, but what's going on in the car park? It happens to be an auto show, and that cries out for a visit.

And that's more or less what happened to me in the town of Killeen, Texas. One of the three Walmarts in the city was hosting an auto show, featuring a special display (below) of this banana yellow Chevrolet Camaro. 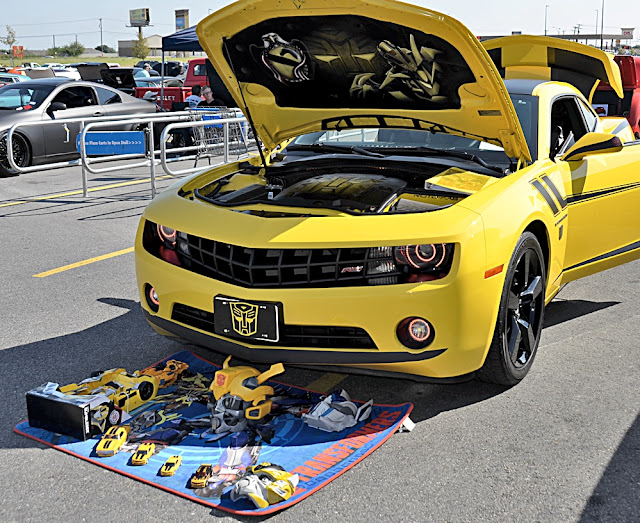 What was particularly interesting from an SMN perspective was that many show cars, including this one, also had matching miniature versions, displayed on the vehicle or alongside. 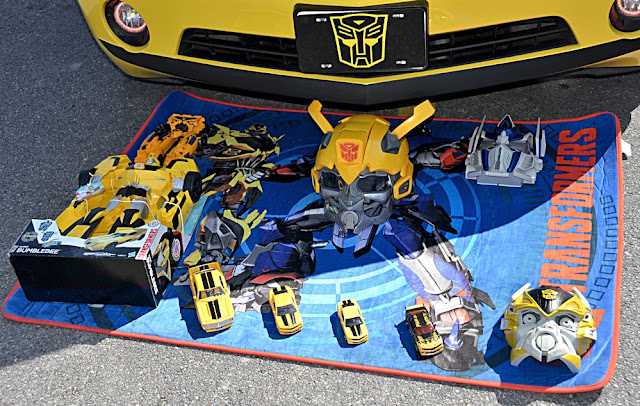 The car that immediately caught my attention was the late-model Chevrolet Camaro, tricked out as Bumblebee from the Transformers movies. The assembled toys and robots laid out of the Transformers rug (above) added an extra sparkle to the show. 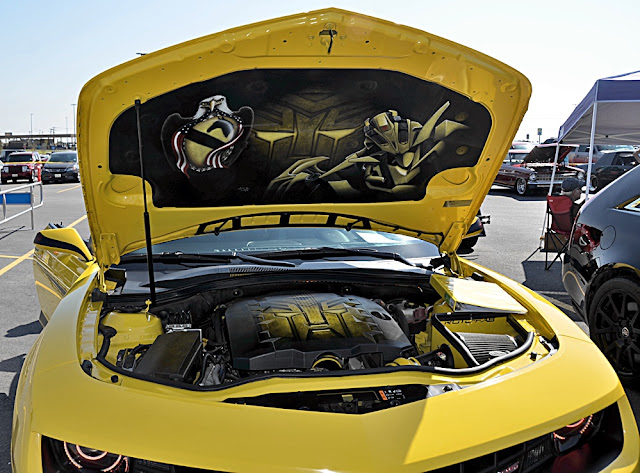 This Camaro was an all-Transformers vehicle, from the handsome artwork painted under the hood (above) to the precisely-painted lettering that adorned the door handles (below) and interior trim. 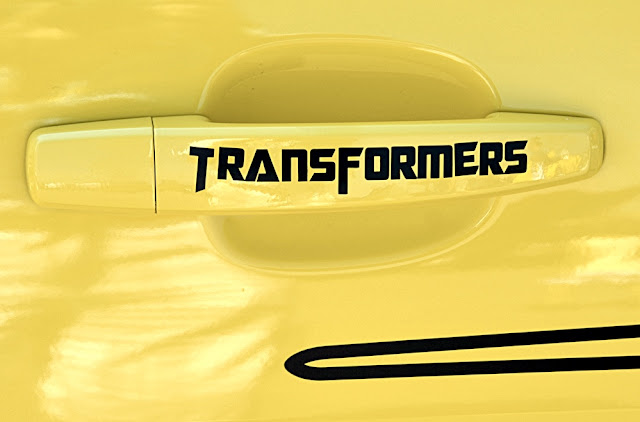 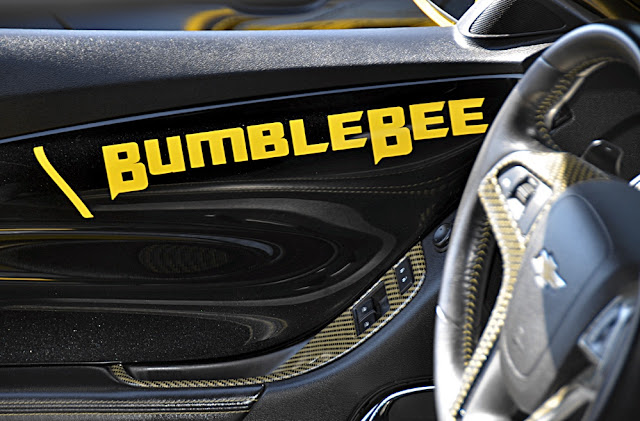 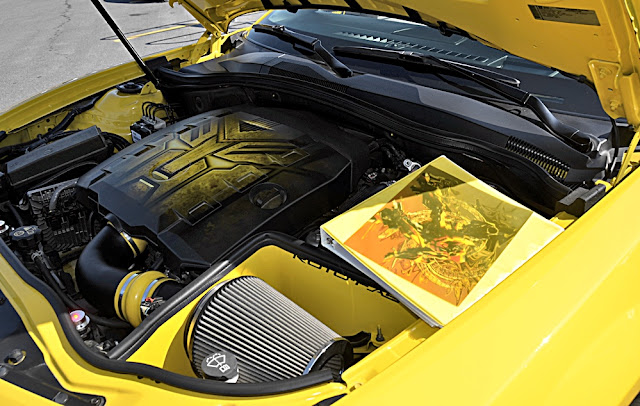 I also spotted a red Camaro (below) that was displayed complete with with a patriotic American duck and a Republic P-47 Thunderbolt parked on the roof. 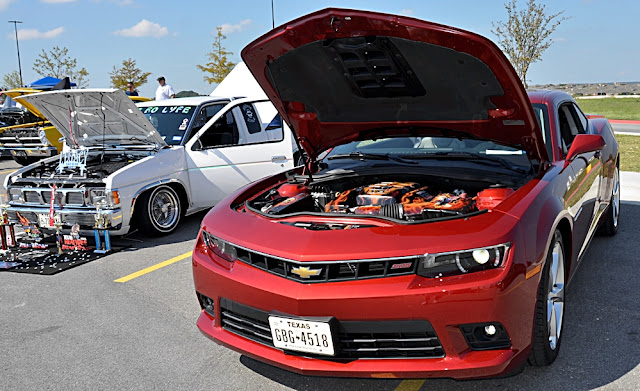 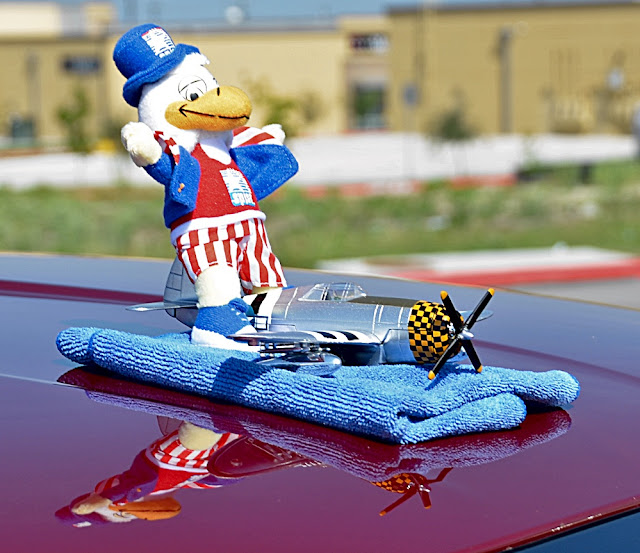 The colourful engine bay (below) was a work of art in itself. 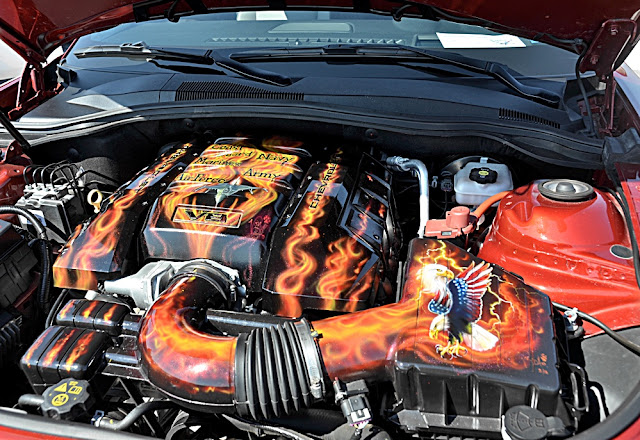 Keep an eye out soon for more of Mat's custom cars.

SMN note: For those of you need an intro to the Transformers universe, here's what they are all about. Bumblebee is the yellow robot, which transforms into a Chevy Camaro. Great VFX in these movies, making them worth a look from this point of view alone.